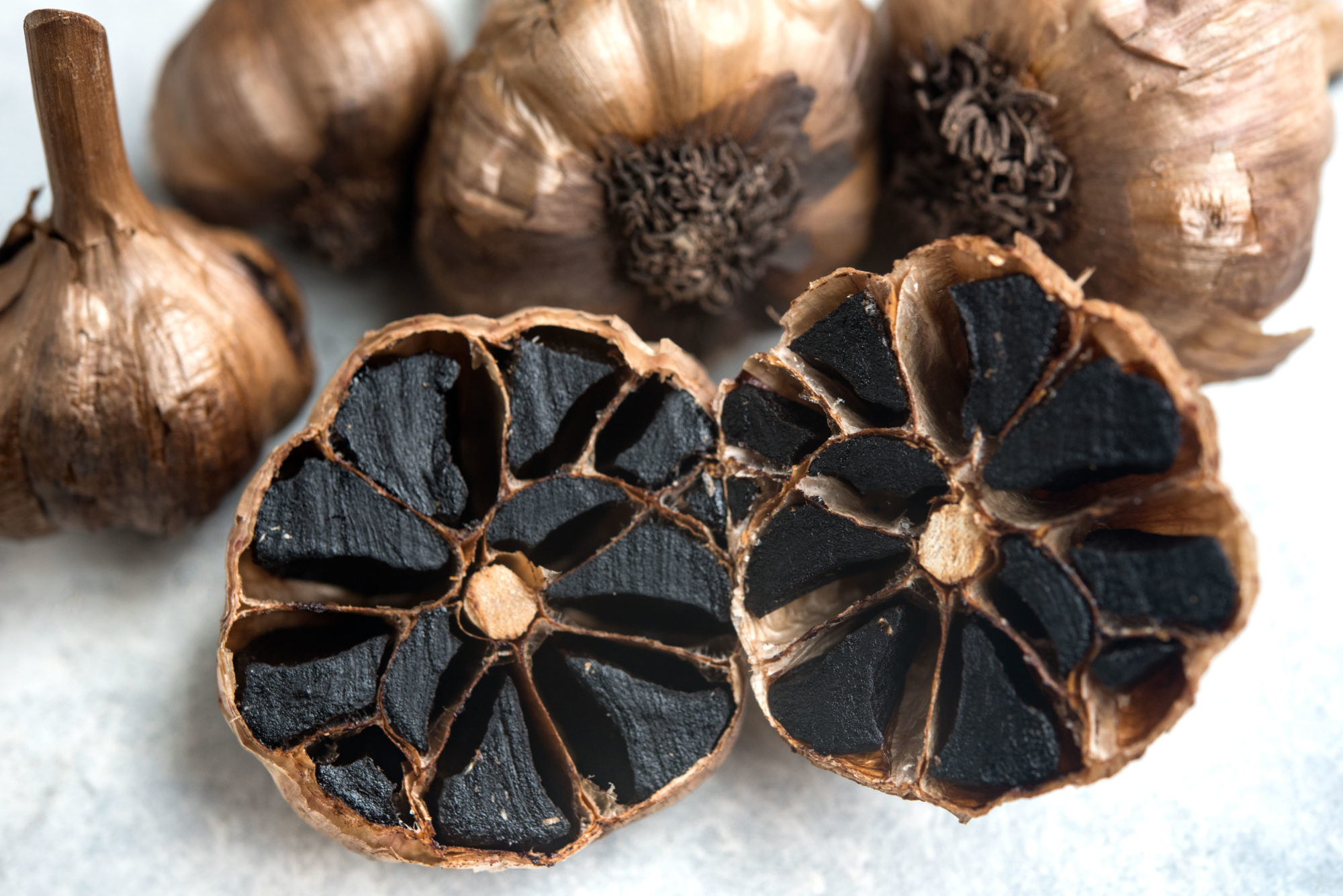 When you cook garlic very slowly for a very long time, it becomes milder, sweeter, and looks really cool.

What happens when you place a bulb of garlic in a warm rice cooker and leave it there for two weeks? Well, first, everything in your entire home will become infused with a stink that you may never be able to get rid of. But more importantly, you (just like many dozens of YouTubers and authors of online tutorials) will have made black garlic, a deeper, mellower version of the original plant that can bring new life to garlic breads and mashed potatoes. Thankfully, you can also buy it at many Asian and speciality grocery stores.

When we think about garlic, we often think of the allium’s strong, astringent flavor. We rarely think about hints of balsamic, molasses, date, licorice, fruit, or caramel. But black garlic is a whole other story. It has been part of the cooking traditions of Korea, China, and Japan for hundreds of years. After aging the garlic for several weeks at a low heat with a high humidity (hence the rice cooker), it takes on a black shade due to melanoidins, a result of the Maillard reaction, which happens between the naturally occurring sugars and amino acids as they break down and become deeply caramelized.

The resulting flavor is much mellower than raw garlic, without that sharp garlicky bite. That’s because allicin, which is responsible for garlic’s pungent aroma, is broken down during the slow roasting process. As a byproduct of this process, S-ally-cysteine (SAC), a compound valued for its superior antioxidant, anti-inflammatory, anti-diabetic health benefits, is formed.

As for its texture, black garlic is subtly chewy, a bit reminiscent of a jelly candy, but with sweet and mild garlicky notes, which creates a total disconnect in your brain since those two taste perceptions rarely occur simultaneously. But that’s precisely what makes black garlic unique.

For those who aren’t particularly thrilled by the idea of leaving a rice cooker on for two weeks straight, black garlic can be found in spice shops and natural food markets, and even Trader Joe’s. I discovered black garlic at my favorite spice shop, the Spice House in Chicago, several years ago—I purchased it on a whim, purely out of curiosity, as I can never forgo the chance to experiment with a new ingredient. I now buy black garlic from a local producer, Mad Dog Farm, near where I live in Pennsylvania.

As for its uses, a clove or two of black garlic makes a nice addition to homemade aioli, any number of sauces, stuffing, dressings, purees, or rubs for chicken, fish, or red meat. Black garlic pureed with a little olive oil spread on toasted bread elevates garlic bread to another level. Ditto for mashed potatoes and a mean grilled cheese. I’ve even seen a few cakes, brownies, and ice cream that call for black garlic.