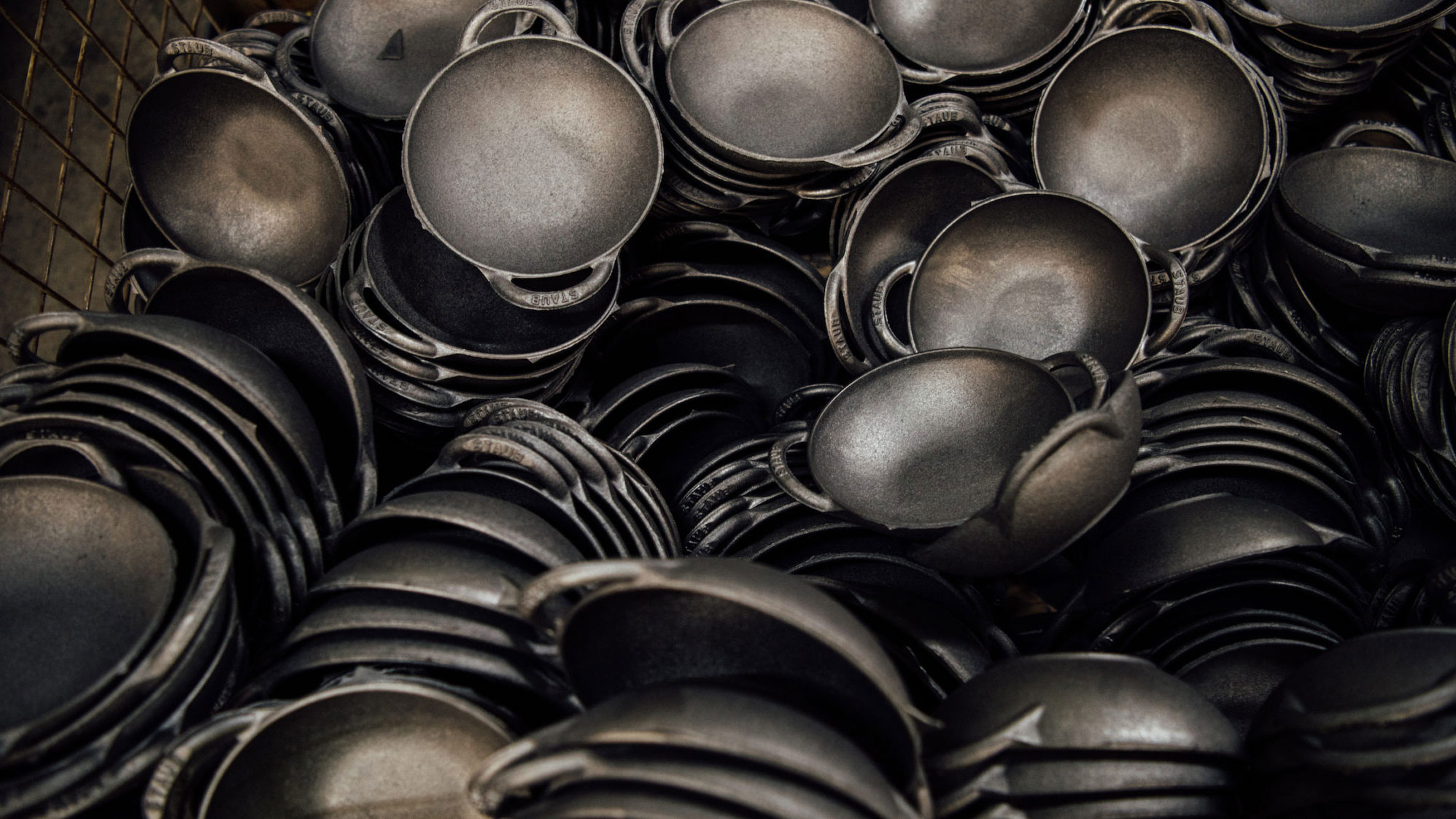 TV chefs love it. Home cooks collect it. The backlash was inevitable.

“I’ve never seen anyone make a convincing argument for why I should have a cast iron pan.”

Last December, BuzzFeed political reporter Rosie Gray tweeted what she thought was a harmless jab at a popular piece of metal cookware. Instead, she found herself on the receiving end of over 2,000 responses, most of them from die-hard cast iron obsessives appalled that she would so casually dis one of the most beloved items in their kitchen. “If you tweet like this, I will never eat your cooking,” said one media colleague, Jamal Jordan. “I am sad for you,” @alana_anton fired off. “How else would you make cornbread?” puzzled another user, @dukejamdogmom.

“I thought that a few people would maybe respond, and there would be an interesting discussion,” Gray recalls a few months later. But the tweet quickly took on a life of its own, even engendering separate debates occurring within the thread over how to care for a cast iron pan—long a topic of debate. “I was not setting out to become some sort of spokesperson for the anti–cast iron camp,” she says.

Gray’s colleague at BuzzFeed, Tasneem Nashrulla, responded in solidarity with not buying cast iron and received scolding messages of her own. “There are Twitter stans for everything now,” Nashrulla reasons.

But “cast iron Twitter” is just the beginning of the cookware’s popularity in media, social and otherwise. There’s cast iron Facebook. Cast iron TikTok. Cast iron Reddit. There are also tributes to the material IRL: Cast iron museums. Cast iron 5Ks. And it goes on.

The mania around cast iron is not new. But it has only grown during the pandemic, as people are finding themselves with more time at home and more meals to cook. And, in this socially distant, digitally dominated world, cast iron fandom has found an even bigger home on the internet.

If you’re at all into cooking, or at least into consuming cooking media, you’ve likely heard the usual arguments for cast iron: it conducts heat well, it gives steaks and pork chops a perfect sear, it can do everything from pan-fry to roast to bake. But what separates cast iron from any other piece of cookware is the mythology around it.

“Cast iron has always been considered a special tool of mankind,” says Eric Walker, who founded the 385,000-strong Cast Iron Cooking Facebook group in 2011. He points to the Norse god Thor’s indestructible hammer, Mjölnir, which was made of cast iron. While most probably can’t trace their cast iron back to Germanic tribes, some can trace it back to the Civil War or the American Revolution. Cast iron pieces are treated like museum artifacts, often included in people’s last will and testament.

“Cast iron has always been considered a special tool of mankind.”

Deborah VanTrece, the chef and owner of Twisted Soul Cookhouse & Pours, in Atlanta, Georgia, says that cast iron holds special importance among many Black families like hers. For her ancestors, cast iron pans were a reliably affordable and durable cooking vessel. When she was growing up, she remembers that her family’s cast iron pan would be washed and reused several times throughout the course of cooking a single meal: for frying chicken, baking cornbread, and making gravy.

“With all of the struggles that our people have had in the past,” VanTrece says, “that skillet, the strength of it, that it still survives,” is incredibly meaningful.

While today, to some, cast iron may feel like specialty equipment, it was a predominant cooking vessel in the United States up until the early to mid-1900s, when nonstick pans became popular due to the invention of Teflon, and competition in the cookware space increased. After that, a lot of the cooks who still chose to use the heavy, clunky cast iron were either more culinarily ambitious or doing so because of a nostalgic or family connection to the cookware. Today, many find cast iron to be too daunting—it’s heavy, it requires seasoning (the process of heating fat, like oil, over metal to create a protective coating), and it has to be hand-washed. It can’t just be chucked in a dishwasher, or it’ll rust.

The pandemic has both amplified existing cast iron loyalties and created new ones. People finally have the time to commit to seasoning, cleaning, and learning about their pans. And sourdough bread does turn out awfully well in a cast iron Dutch oven.

That popularity shows in the numbers. Lodge, one of the most well-known purveyors of cast iron, has seen double-digit sales growth since the pandemic began, according to the company. Lodge’s 10.25-inch cast iron pan is Amazon’s top-selling skillet, with more than 70,000 five-star ratings.

“I think people are operating in isolation in such an intense way that you can absolutely fixate on a project” like cast iron, says Kat Kinsman, senior editor at Food & Wine, adding that the tactile nature of cast iron at a time when we are mostly able to interact virtually feels especially appealing. To boot, information about cast iron is now more widely available, which can make the cookware feel more accessible to a larger audience. Walker started his Facebook group because he was new to cast iron cooking and wanted a place where people could share knowledge. In the last year alone, the group gained over 75,000 members.

“There is a long-running joke in the community about a dreaded disease called cast iron-itis: an addictive compulsion to collect more cast iron,” he says. He owns about a hundred pieces himself, but some people in the group have collections in the thousands.

Evelyn Ivanova, a moderator and member of the group, says she has noticed a lot more activity on the platform since the pandemic began. That also means more debates over classic cast iron queries—which can get pretty heated.

“One of the advantages and disadvantages of social media on a busy group like this is that if you ask a simple question—“how do you remove rust?”—you can usually expect 20 or 30 comments almost immediately, all giving advice,” Walker explains. And while most of the advice is good, inevitably, “people start criticizing each other in the comments.” They fiercely protect their opinions, which are often born from family traditions. A retort he often hears: “But that’s how my grandparents cleaned cast iron all their lives.” Heated posts often end up being reported, and an administrator will have to step in.

Lodge, one of the most well-known purveyors of cast iron, has seen double-digit sales growth since the pandemic began.

While the group is, on the whole, pretty civil, Walker says that out of the 200 to 300 posts per day, “probably between 25 and 50” are reported (a post can also be reported if it is off topic or spam).

“It’s absolutely predictable which posts” will generate passionate discussion, Ivanova says. “Brussels sprouts, how to cook a steak, chicken gizzards, liver and onions, scrapple, whether cornbread should be sweet or not, whether chili can have beans or not, and anything unusual like purple sweet potatoes (believe it or not).”

To soap or not to soap is another big one. Plenty of people will say that you can’t wash your cast iron with soap, as it will damage the seasoning. The same number will tell you that it’s totally fine to soap your cookware, as they’re super durable. Both sides will believe in their argument with equal fervor. (My take: go ahead and use soap. Or don’t.)

Todd Richards, the chef and founder of the Soulful Company restaurant group in Atlanta, likens the debates over cast iron to those over barbecue styles. “Everyone wants to be right,” he says. “Maybe cast iron is one of those things where there isn’t a wrong answer, there is just a lot of personal preference.”

But as much as these debates can help to demystify cast iron cooking, they can also be counterproductive.

Ned Adams, an administrator for a different Facebook group called Cast Iron Community, says that people who join and are just starting out with cast iron “may end up overinformed and overwhelmed with all the varying ‘what to do’ and ‘how to do it.’” It can scare newcomers away.

Kinsman says that much of the information around cast iron has more to do with “fetishizing” the cookware rather than emphasizing its “ease and utility.” She also laments the amount of mansplaining that happens around cast iron, especially on the internet. She posted on Twitter about her process of restoring a cast iron pan, and even though she did so successfully and has a masters’ degree in metalsmithing, people—a lot of them men—still jumped in to offer unsolicited advice.

“It’s not like there are cast iron police,” she says, “though people assume that posture where it can become an entire identity.”

For proof of this broader effect, look no further than Gray herself, who, even after being publicly scolded over her stance on cast iron, is still not convinced she needs to buy one. She appreciates the passionate cast iron lovers who so zealously made their case. But she says it’s “one degree too advanced for who I am, which is an amateur home cook.”

But that won’t stop the cast iron stans from trying to convince her—and anyone else who will listen—otherwise.