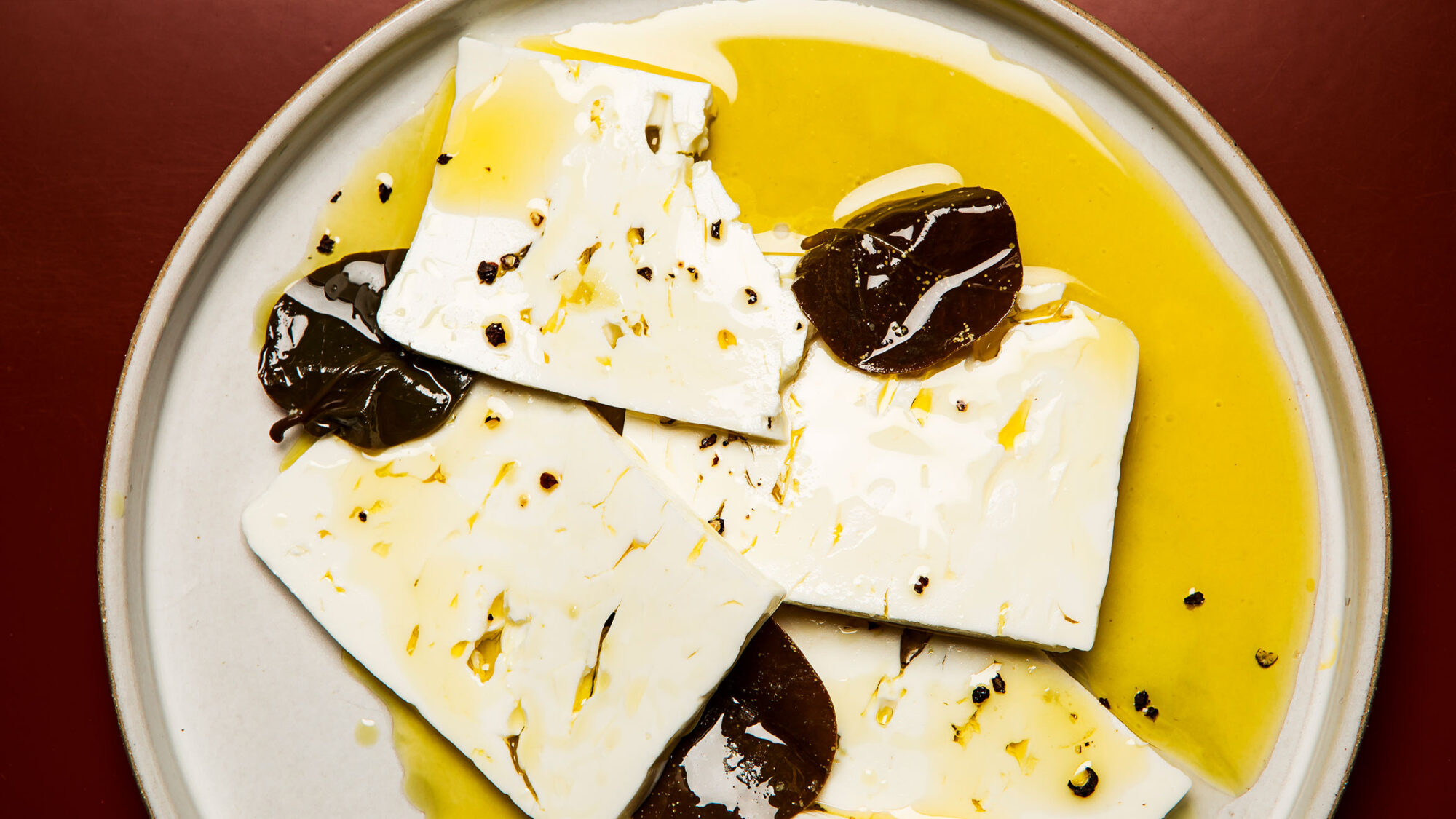 Do not accept those prepackaged, pre-crumbled impersonators.

In Greece, shopping for cheese usually means shopping for feta cheese. There, the shelves of large supermarkets are stocked with dozens of brands, and specialty shops display barrel upon barrel filled with locally produced feta floating in brine, which cheesemongers slice from massive blocks to sell to customers—the word “feta” itself means “slice.” Organized by origin, saltiness, and texture (some crumbly, some velvety and smooth), these cheeses are given the same consideration as the finest aged Pecorino or the freshest Bucheron.

It’s far from the experience of shopping for feta in the United States. If you wander through the cheese aisle in a Whole Foods, you might come across containers of nonbrand white cheese submerged in brine—if you’re lucky. But more often than not, your only option is the clumpy, pre-crumbled Athenos or Président brands. It’s the kind meant to lend salads and vegetables a salty (though generic) bite, but it wilts beneath a vinaigrette and leaves a trail of white dust across your fingertips.

I tried to explain to Thanasis Sotiropoulos, cheesemonger at I Strougka tou Moria (Η στρούγκα του Μοριά), a cheese shop located in central Athens, that pre-crumbled, chalky chunks are the norm in the United States. “That’s not real feta,” he replied.

He’s right. These prepackaged bricks are ghosts of a shadow of the real feta cheese. The real stuff is complex. Its flavor spans the spectrum from intensely salty to pungent and peppery to subtle and creamy—a perfect expression of the milk itself. Feta exists throughout Europe (though outside of Greece, it’s labeled “feta-style”); in France and Bulgaria, it tends to be more sheep-heavy, and thus creamier and milder. But feta is most widely associated with Greece, where it dates back to the 8th century BC, when it was mentioned in Homer’s Odyssey. There, it’s as essential to the diet as olive oil.

Vasiliki Vourliotaki, the chef at Ousia, an upscale contemporary Greek restaurant in New York City’s Hell’s Kitchen, grew up in Athens, where feta was part of her everyday life. “There’s no Greek house where you go and open the fridge and don’t find feta,” she says. She believes it can be woven into any dish to add flavor and texture.

In Greece, feta is a protected designation of origin (PDO) product, meaning it must follow strict standards in order to be packaged and sold as such. These criteria dictate everything from the milk composition (at least 70 percent sheep’s milk and 30 percent goat’s milk) to the aging process, and even where it’s from; regions not approved to make feta can label their product only as “white cheese.” The European Union can ensure that producers don’t mislead buyers with illegally labeled feta, but this jurisdiction doesn’t extend to the United States, where anything can be crumbled and called “feta.” In fact, organizations in the United States have fought to continue producing and selling non-feta feta, arguing that too much market share is at stake.

In a field of fakes, how can you tell what’s good?

In Greece, the recipe for PDO feta is always the same, but within that recipe, you’ll find variations in saltiness, milk flavor, and consistency. Whereas in the United States, feta is almost always made with industrially processed cow’s milk, the real stuff starts with milk from sheep and/or goats that range freely. Seasonality makes a difference, too; in the spring, milk—and the resulting cheese—will taste of herbs and grass and all the things the animals in sun-soaked Grecian fields are eating. In winter, it’ll be a bit dull, thanks to the animals’ hay-heavy diet. On the island of Lesvos, where the animals graze in pasture sprayed with seawater, feta tends to be strong and salty. In Thessaloniki, where the sheep eat lush green grasses, the cheeses are earthy and sharp. When it comes to texture, feta can be dense and crumbly or spreadable, almost like cream cheese—a result of more sheep’s milk, which has a higher fat content.

“When I think of feta in the U.S., I think of chunks of cheese that are in cryovac, not in brine,” says Liz Thorpe, former cheesemonger at Murray’s Cheese in New York City and author of The Book of Cheese. But real feta is always sold in brine, or water salted to varying degrees depending on the family recipe. (Sotiropoulos says older generations’ brine recipes are saltier than more contemporary cheesemakers’.) Before household refrigeration was commonplace, salty water was necessary for preservation, and it’s now quintessential to feta’s character and flavor. Without it, the cheese would be rendered dry and rubbery, its flavor flat and stagnant.

This flavorful, briny feta (preferably imported from Greece) is meant for so much more than sprinkling on salads. Using a semi-hard variety imported from Elassona, a small town in northern Greece where her mother is from, chef Vourliotaki makes a creamy, subtly salty broth for mussels. She also whips feta into spreads, which she serves over broccoli rabe, and she deep-fries it for her saganaki. “The outside is crispy, but the inside is warm but not melting,” she says of the unexpected texture.

Thorpe says even something as humble as a watermelon and feta salad is impossible to achieve without the sharpness or grassiness of the real stuff. When it’s right, “you get sweet and salty, you get fruity balanced against brininess, and lots of interplay of flavor, even though it’s so simple,” says Thorpe. Sotiropoulos recommends going back to basics and just pairing feta with bread; the better it is, the fewer supporting ingredients you need.

Short of spending time in Greece, which everybody should do, there are a handful of options for sourcing in the United States. More and more specialty shops have begun carrying cheeses imported from small producers in Greece. I used to buy a velvety, soft variety made by nuns outside of Thessaloniki from Di Bruno Brothers in Philadelphia. At Murray’s Cheese in New York, you can find feta sourced from Thessaly and Macedonia. It’s pricey—around $15 for seven to ten ounces—but worth it. Vourliotaki endorses Dodoni, a semi-salty, semisoft brand from Epirus that can be found on Amazon.

At major grocery stories, look for Aphrodite or Mt Vikos feta, which are both Greek-made and come vacuum-sealed with brine (around $10 for seven or eight ounces). Some big brands, like Whole Foods’ 365 Everyday Value, sell feta in brine-filled containers; others, like Athenos, Organic Valley, and Président, sell blocks packaged in a bit of brine. Always be sure to read the ingredient list; Thorpe says to make sure it contains goat’s or, more important, sheep’s milk—not cow’s. When shopping at a specialty store, Sotiropoulos says to ask for a taste or a smell—good feta has a pungent aroma—and ask if it’s PDO; if it is, the recipe will always be the same, and you’ll know you’re getting the real deal.

Katherine Whittaker is based in Athens, Greece, where she writes about food, travel, and Greek and EU politics for publications including Saveur, Airbnb, and Quartz. She also runs tours and writes guides to food and nightlife in Athens.