Get a free recipe
Subscribe
Wake Up! Coffee in Paris Doesn’t Need Saving.
By: Jordan Michelman 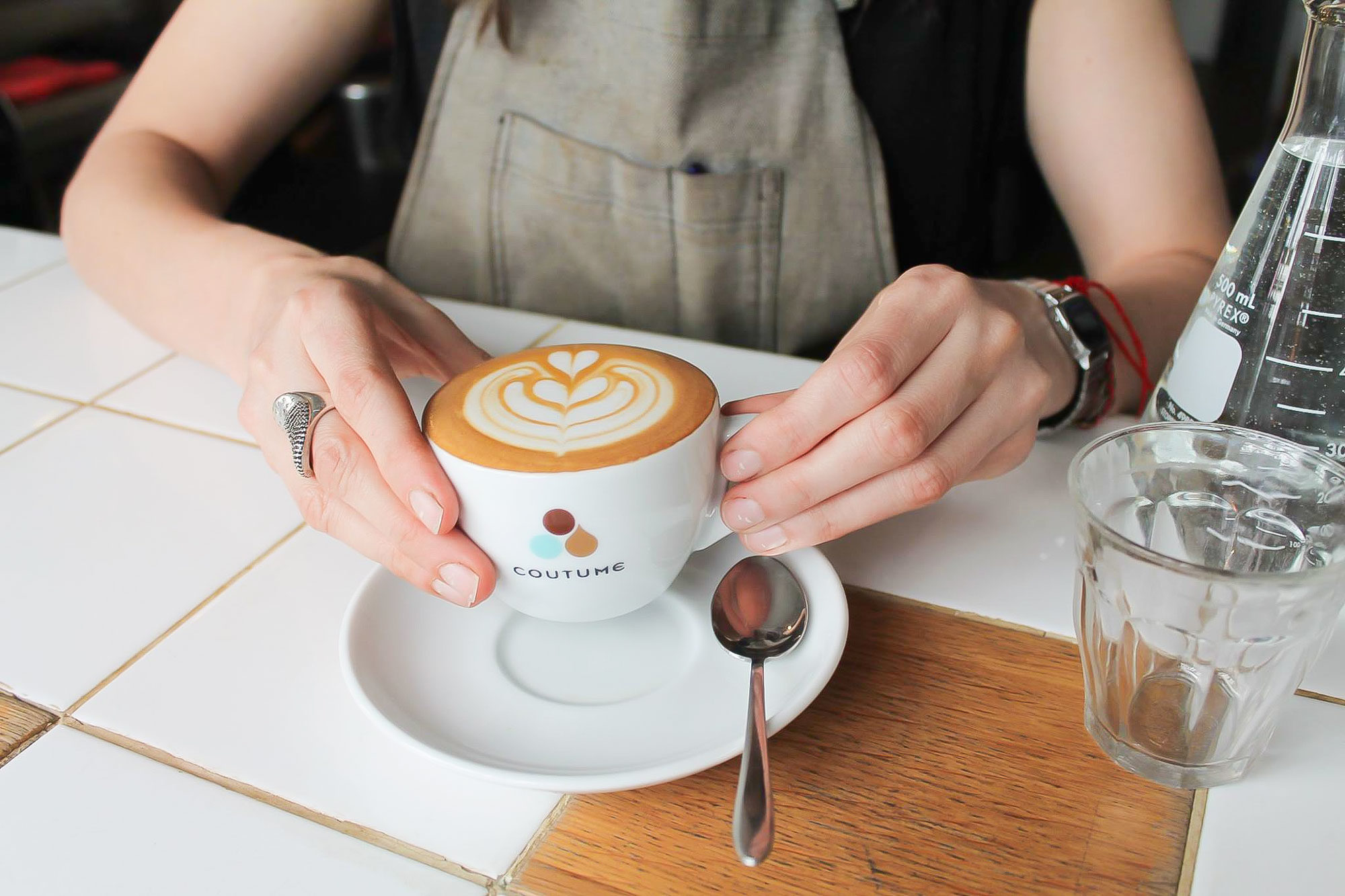 Alain Ducasse is getting into the “reflective degustation” of coffee, pioneering and thought-leadering in a city where coffee has been…pretty amazing, actually.

The move is too familiar. An eminent brand, thought leader, or great custodian of taste steps into the specialty coffee scene, heralding disruption. Be it bank, restaurant, or coffee titan (see: Howard Schultz), the announcement of a grand new flagship is met with fawningly promotional press by a sympathetic outlet. Earlier this month, it happened again. The big name in question was Mr. Michelin Stars (Plural) himself, Alain Ducasse, and his newly opened Cafe Alain Ducasse in Paris; the outlet taking the bait was the aging American media brand Fortune.

The profile was breathless. The great man Ducasse’s great new café was said to be “meant for reflective degustation” of coffee and staffed with a roster of global barista championship staff. They’re not just making coffee, oh no: They are producing an “exacting gastronomic-style of service that has the potential to attract a broader audience,” as per the fawning prose of journalist Lindsey Tramuta. The article’s choices of quotes are borderline sycophantic: The French food writer Caroline Mignot, having evidently never before seen fresh whipped cream in a coffee bar, calls the coffee service at Ducasse “a different kind of café experience.”

All of which is fine, or at least would be if you were talking about almost any other city in the world. The great waves of dumb, ingratiating articles that accompany the opening of every Starbucks Reserve store or Capital One concept bank-café make similar claims of game changing. But to write this way about the Parisian coffee scene in the context of Alain Ducasse is an eliding act I cannot stand for.

The real story here is not that Alain Ducasse is getting into coffee, at least not yet; it’s that no coffee culture in the world has come further, and faster, in the last decade than Paris’s. Not even a decade ago, The New York Times could be given no grief for running a headline like “Why Is Coffee in Paris So Bad?” Today, Paris is home to dozens of contemporary, quality-focused specialty coffee bars every bit as good as what you’ll find in New York, Tokyo, or London, packed throughout the hip and teeming 10th and 11th Arrondissements along Canal St-Martin, emanating out into every little neighborhood and nook of the city.

The city has gone from laughingstock to global point of pilgrimage. We’ve covered it so much on Sprudge (the coffee publication I cofounded in 2009) that I almost feel a little bit proud of Paris, a city whose coffee scene I find myself swooning over, fantasizing about my next visit like an emo teenager après-Amélie. Coffee has long focused on the idea of a Nazarene-like figure to wander over from the food world and anoint the practice of specialty coffee as special, worthy, and even…dare we suggest…culinary. In this, I fear Rene Redzepi has Ducasse beat by five years at least, to say nothing of coffee-obsessed chefs and restaurateurs like Thomas Keller, Daniel Humm, the brothers Canlis, Dominique Crenn, Renee Erickson, Erik Bruner-Yang, Enrique Olvera, James Lowe, and Danny Meyer (who loves coffee so much that his Union Square Hospitality Group went out and acquired a leading Manhattan brand, Joe Coffee, in 2017).

I do think there’s cause to be excited about Cafe Alain Ducasse, but I think it should be seen as much more the tail end of a trend wave than some great, epochal event. There’s something that rubs me wrong about the idea that the grand aging restaurateur (or the stock-beholden coffee multinational, or the millennial-cruising fiduciary globocorp) can come into the coffee space now—especially in a city like Paris—and claim some sort of transformational narrative, after much of the dirty work has been done to win the hearts and minds of today’s specialty coffee drinker.

Will Cafe Alain Ducasse be a studiously imitated simulacrum of a great café experience (like the Starbucks Reserve spaces), or does it have something more to offer beyond atonal regurgitation? And what about the coffee, of which Fortune tells us precious little in this article, beyond the fact that it is allegedly “equitable” (no further definition is given) and will be brewed by “cafeliers” (get it, like a coffee sommelier) on fancy “Marzacco” [sic] espresso machines? [Calling out the typo might seem petty, but I assure you, in the wine world this would be like a wine piece presenting strong feelings on the 2019 Bordough vintages.] That sound you hear—a faint fluttering like some great flight of moths from a thousand miles away—has a source. It’s the workaday ranks of the Parisian specialty coffee scene, le tout monde cafetier, rolling their eyes in unison (and with perhaps just the faintest French exhalation—“A-pew! ”) at the very notion of Monsieur Ducasse somehow being the savior of their backward coffee culture.

Will Cafe Alain Ducasse be a studiously imitated simulacrum of a great café experience (like the Starbucks Reserve spaces), or does it have something more to offer beyond atonal regurgitation?

Parisian coffee culture has already been saved—it is in fact thriving, and has been for the better part of a decade, offering a daily product every bit as culinary and dare-I-say-it “gastronomic” as what they’re brewing here in the early days at Ducasse. One just needs to know where to look, a task about which Fortune evidently has zero interest in informing its readers. The premium crop of Parisian coffee bars and roasters by and large are not owned by multimillionaires and do not have Michelin stars (or even a Wikipedia page), much less a PR team hooking up a puff piece.

All of which is to say: If you do choose to travel to Paris for coffee—and you should—Cafe Alain Ducasse seems positively appropriate to include on your must-visit list. Just don’t start and end your coffee experience there; it would be like visiting Paris and skipping the simple perfection of a morning croissant or baguette (a fate worse than death, honestly). Here are a few places not to miss. Coutume
Coutume’s launch in 2011 helped usher in a new era of coffee quality in Paris, led by cofounders Antoine Netien and Tom Clark. Those who complain that specialty coffee in Paris is the playground of expats have never met Netien, a caviar- and natural-wine-loving Parisian aesthete who also happens to have a massively respected palate and sourcing record at top coffee farms worldwide. Coutume operates around a half dozen coffee bars in Paris (plus one more in Geneva) and supply delicately light-roasted coffee for dozens more café destinations across the city. My favorite Coutume location is, oddly enough, inside the Finnish Cultural Institute (in the Quartier de la Sorbonne), with interior design by Joanna Laajisto. 60 Rue des Ecoles, coutumecafe.com

La Fontaine de Belleville (pictured above)
Opened in 2016 by the team behind Bellevue Brulerie, an influential microroaster located in the 19th Arrondissement, this place manages a sort of effortless live-in Parisian lifestyle cool. Belleville’s great genius was in acquiring a former bistro space with deep neighborhood roots; from there it was simply a matter of improving the beers on tap (with a focus on French farmhouse ales), adding an espresso machine on the counter, and letting the good vibes continue to spill out onto the street. If I could be a regular at any café in the world, it would be this one, hanging out daily as morning cappuccinos turn to lunch salad and baguette, before a light beer in the twilight, perhaps a walk down to the canal, and back again for a quiet aperitivo amongst the evening crowd. Live jazz has been performed in this space since the early 20th century, and on Saturday nights the café again hosts performers from around the world. It’s just perfect. 31-33 Rue Juliette Dodu, cafesbelleville.com

Hexagone
Over in the 14th Arrondissement, Stephane Cataldi and the team at Hexagone have carved out a niche, offering perhaps the most quintessentially understated “French” experience on the modern Paris café scene. The name is a nod to a common nickname for the modern state of France—l’hexogone—and the café serves traditional French pastries, cakes, and caramels. Cataldi is one of the city’s best roasters, and the 14th was a veritable specialty coffee no-man’s-land when this place opened in 2015. Today it is a must-visit. 121 Rue du Château, hexagone-paris.fr

La Caféothèque
Opened in 2005 on the banks of the Seine, directly across from the Cathedral, Gloria Montenegro’s humble coffee bar has played an outsize role in growing coffee culture citywide. The café’s vibe feels period-appropriate—Parisian cafe meets Gen X grunge with lots of history behind it—and the coffee (particularly the bar’s espresso service) maintains a longstanding reputation for quality and excellence. This coffee bar was winning over Parisians back in the Jacques Chirac era, when Ducasse was still busy winning over New Yorkers under George W. Bush. 52 Rue de l’Hôtel de ville, lacafeotheque.com