Get a free recipe
Subscribe
Waiting for the Winter Kimchi
By: Nara Shin 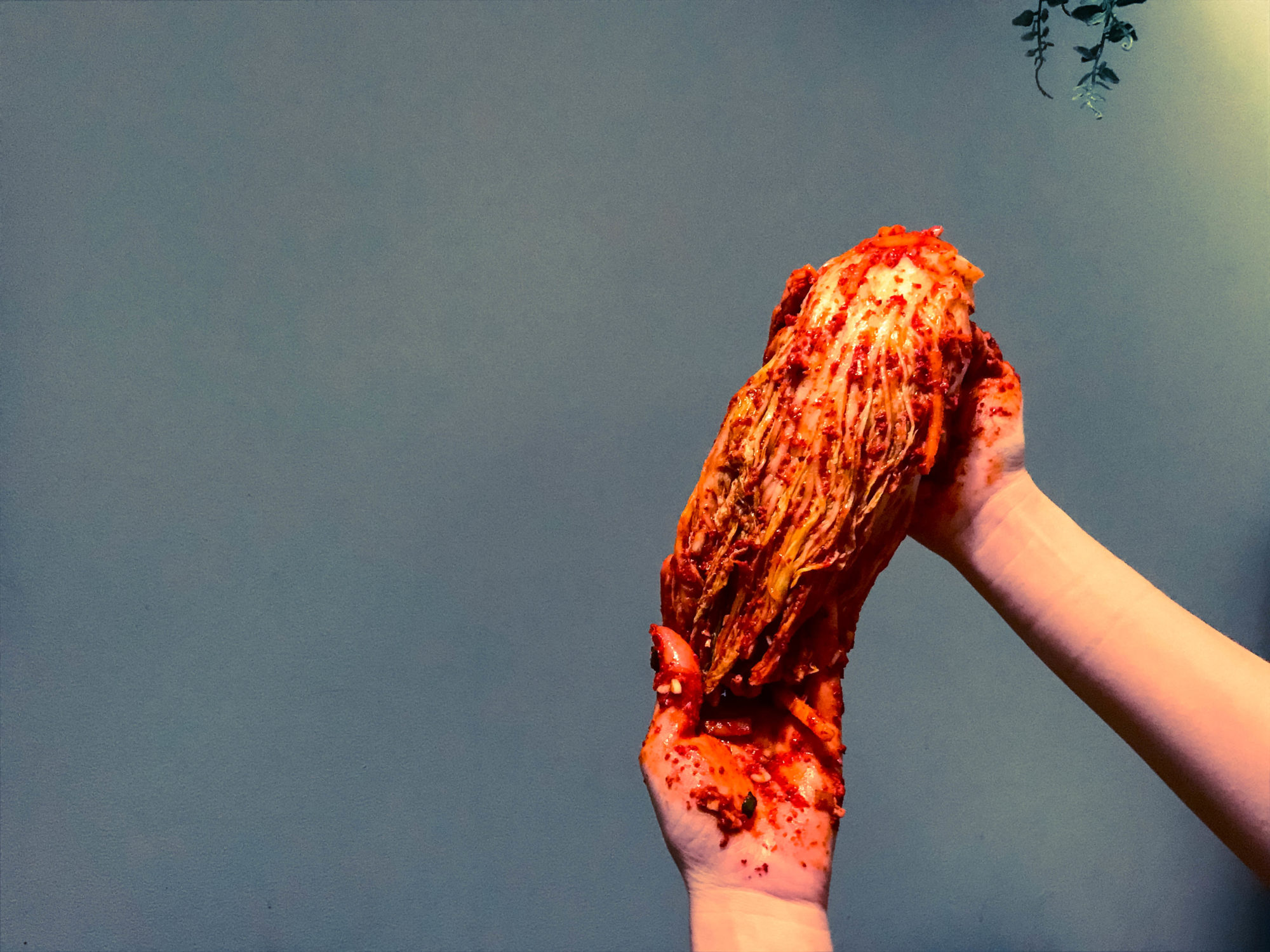 With no tiny salted shrimp or anchovy sauce or even gochugaru in the pantry, there’s still a kimchi to make.

At the start of winter in South Korea, families and neighbors traditionally gather at one home and kimjang—a ritual where kimchi is collectively made in bulk, then shared. The total number of Napa cabbage heads and torpedo-shaped radishes, called mu, can reach triple digits; no one leaves empty-handed.

Though my generation faithfully visits grandparents in the countryside for major Korean holidays, rarely do we leave our metropolitan high-rise apartments to kimjang anymore. From smaller family units (South Korea recorded the lowest birth rate in the world last year) to booming urbanization and the general avoidance of labor-intensive rituals, all variables lead us to the refrigerated section of the grocery store, where you can acquire your preferred variation of kimchi in presealed plastic or by the gallon. Single-serving cans of fermented cabbage are also available, right next to the guilty treasure that is SPAM, but be advised: These shelf-stable versions are best reserved for emergencies.

In 2013, the Republic of Korea filed the necessary paperwork and kimjang was inscribed as a UNESCO intangible cultural heritage. (Not to be confused with North Korea’s entry for the exact same thing, submitted two years later with different photos and more questionable captions.) That sounds impressive, but consider that almost everything on the list is a dying art form or practice: Kimjang is right up there with Turkish Kırkpınar oil wrestling, Ugandan barkcloth making, and Swiss-Austrian avalanche risk management. Its future, by association, doesn’t seem bright.

My reasons for making kimchi from scratch in my New York City apartment have nothing to do with kimjang’s future, much less the past. I don’t have childhood memories of my arms deep in basins of gochugaru seasoning, much less the inheritance of a secret recipe from either grandmother. My mother saved her strength to work overtime on weekends and U.S. holidays (her fast track to the American dream) and bought kimchi by the gallon at the Asian supermarket.

Today, Tobagi brand’s readymade buckets of kimchi are a steal at H Mart and perfectly adequate for my consumption schedule and palate. I prefer it to the complimentary kimchi sides served at most Koreatown restaurants, which are usually not vibrant or tangy enough for me.

So why do I find myself in the kitchen, inconveniently making kimchi in an eerie bastardization of its origins? Unlike the communal concept of kimjang—a ritual for bringing people and generations together—mine is a solitary pursuit. Thoughts are collected, then submerged alongside the vegetables in airtight containers. Some people run in their alone time; I brine.

I wait alongside the crinkly, veiny baechu and cubes of mu, grazed with salt, as they silently weep out water over the course of a few hours. My eyes follow suit, tearing up among the slices of onion and garlic, but I can still see that the sweet rice flour paste, cooling on a bowl of ice, is visually indistinguishable from semen. The gochugaru marinade seeps onto the countertop, staining my bright-pink Mamison gauntlets. No matter how I position my iPhone, there’s no way to alleviate the fact that this looks like a crime scene.

The total I spend on ingredients far exceeds the price of my bucket of grocery store kimchi, but I revel in the needless work and the weeks-long wait to make something just for myself. I’m not on edge the way I am when coddling sourdough or stirring risotto, perhaps because there’s no additional self-induced burden of wanting to please whomever I’m planning to share that food with. It helps that kimchi is so forgiving in its process and its shelf life. The appeal of fermenting this slow is that, for once, I follow nature’s schedule rather than my own artificially set pace. And it waits for me to change even longer than I’ve waited for the cabbage to; by the next time I twist off the lid, I might be a smidge wiser and less cynical.

Kimchi. It’s what we say out of habit when we turn toward a camera lens, the Korean variant of “cheese,” spoken to stretch the lips horizontally. I had never expected kimchi to become as cool as kale, especially since camera app filters tend to enhance the Technicolor hues of pickled beets and red onions much better than the gory redness of most kimchi.

As “healthy gut food” and “probiotic-rich” become popular descriptors for the side dish whose previous knee-jerk reaction was “What’s that smell?” One might better understand the wariness that I’ve Saran-wrapped tightly around my personal stash of fermented vegetables. Catapult’s web magazine recently published a rant on “hipster kimchi” that shows how we feel when food—or anything, for that matter—is disembodied from the history and culture that created it.

But I’ve even loosened my previous grudges against vegan kimchi, as I’m reminded that Korean Buddhists make such a version at the temple. Along with meat, the monks eschew garlic, onion, chives, green onions, and leeks from their diet, lest their pungency stir up feelings of anger or carnal desires and impede the path to enlightenment. Following this doctrine is akin to making Korean cuisine with one’s hands tied, so frequently are these ingredients incorporated—which is why the flavorful result of temple kimchi is so astonishing and something to seek out. Its renditions, which might make use of hongsi (soft, overripe red persimmon) or cheonggak (the seaweed nicknamed Dead Man’s Fingers), have softened my misgivings about authenticity. Heck, even adding Sprite or Coke seems to make a recipe more unabashedly Korean these days.

Remembering this calms my panic over not having saeujeot (teeny, tiny fermented salted shrimp) or liquid anchovy extract on hand; I remind myself that kimchi ferments regardless. I mutter this mantra again in another recent kimchi-making episode, upon opening a container of gochugaru and discovering dandelion-like mold taking up air rights because I had forgotten it’s best stored in the freezer. I lose my momentum, unsure what to do without the crucial spice; the closest H-Mart is 15 subway stops away.

There’s no substitute for the aforementioned Korean red chile pepper flakes, though in The Kimchi Cookbook, Lauryn Chun suggests pureeing red bell pepper for a milder, sweeter variation. In previous gochugaru-less predicaments, I’ve successfully made a batch of I-couldn’t-tell-the-difference kkakdugi (radish kimchi) using Turkish silk chile instead, but that was a cupboard-rummaging fluke, and the spice is probably even harder to source.

Today, my solution to a pantry with no gochugaru is to make dongchimi—which literally means “winter kimchi”—as there is no gochugaru (or fish!) asked for in the recipe. It’s a baek (white) kimchi more in demand for its pickling liquid than actual pickled contents: large sections of mu. Historically made during kimjang and eaten in the winter, cold dongchimi provides a contrast to spicy stews and heavy meats. In the summer, its broth becomes an elixir when served with ice, used as a canvas for naengmyun (chilled buckwheat noodles). I’ve often wished that bottled dongchimi was a thing; on a sweltering day, it invigorates and replenishes in bracing ways that Gatorade and La Croix and kombucha can’t. “Refreshing” is, or should be, the most common word to describe dongchimi.

“When I taste [dongchimi], I can almost taste the origins of kimchi, just water and salt and time,” writes Insa chef Sohui Kim in Korean Home Cooking. In her dongchimi recipe, she recommends waiting three weeks before serving.

When enough days pass, I take a break from being a cultural ambassador and unscrew one of the Mason jars sitting in the back of the fridge. It’s quiet in my apartment; I need make no public disclaimer announcing the smell, or explain how the jar’s contents should be eaten. Just a small sigh of fizz surfacing at the top. I sip the cold brine straight from the jar for the rest of my lunch, in place of tap water. May we all keep something in the fridge that we’ve made just for ourselves, a reminder of our origins—and a reminder to listen to our personal expectations more closely than the clamoring external ones.

Nara Shin was born in South Korea and writes from Queens, New York.