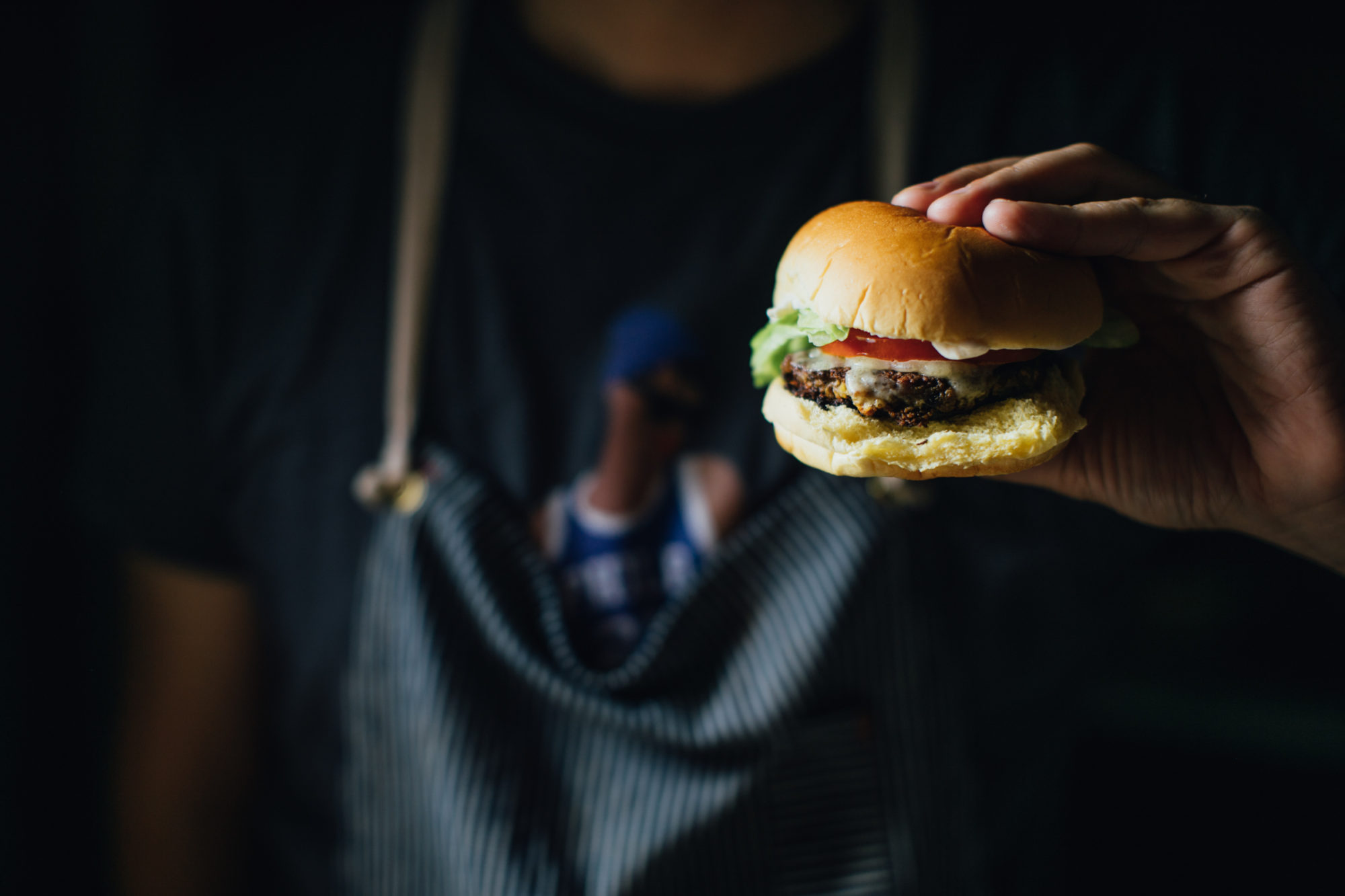 Developing a decent meatless burger recipe is hard. It’s why so many of them are terrible.

Somewhere, in the crumbly headspace between my second and seventeenth attempts to get it right, I started feeling fatalistic.

“Today is the day I die in my kitchen,” I proclaimed to a rapt audience (my dog), raising a half-empty sack of wheat berries toward the ceiling like poor Yorick’s skull. “Today is the day that a veggie burger ends my life.”

Maybe I was being a little dramatic. But for a minute, my humble self-assigned task—creating a meatless patty that doesn’t taste like death—really had me feeling that bleak. At some point during my foray into a vortex of boiling-over pots, whirring processor blades, too-brown avocados, and too-dull box graters, I’d hit bottom. Making a good veggie burger, I realized, is hard. No wonder so many of them suck.

Here I should offer a disclaimer: I am not a vegetarian, but I am also not here to carnsplain. My goal was not to craft a veggie burger that looks, feels, or tastes like beef (simulated bleeding was not on my checklist), but instead to make one that tastes good—because vegetables are good. And I wanted to achieve this with ingredients that anyone can buy at an average grocery store. That sounds easy enough on paper. But as the many trash veggie burgers I’ve eaten over the years have demonstrated, easy on paper rarely translates to easy in practice. Most store-bought patties are salty and rubbery at best, and flavorless and puck-like at worst. Bars and restaurants always puff their chests about their proprietary creations, but with a few exceptions, the majority I’ve tried have been monstrously soft and stricken with seasoning that seems to have come straight from an Old El Paso taco packet. Maybe I have bad taste, bad luck, or both, but this has overwhelmingly been my experience since the ’90s-era salad days of the Boca burger.

My challenge’s other major motivating factor: I am married to a person who does not eat meat. Michelle hates veggie burgers for the same reasons I do, but she’s also had to deal with the agita of people constantly alerting her to their presence on menus because they think she wants them. The worst part is that, in a vacuum, she does want them. But she’s had so many disappointments that she’s pledged undying fealty to the Shake Shack ‘Shroom Burger, a deep-fried, molten-cheese-filled portobello mushroom that bursts like a water balloon when you bite into it. It is so good, but it’s just not a veggie burger, meaning built with whole ingredients and some semblance of healthful appeal.

And so I began. My first and most vital step was identifying the ingredients for my base. I knew I wanted to avoid lentils and beans, two usual veggie burger suspects that so often torpedo the entire mission—if you overcook, underprocess, or poorly season them even a bit, it’s all over. So I polled a bunch of chefs and food people to try to reach some sort of consensus. “With veggie burgers, texture is really the challenge. A lot of the common components are mushy,” Chris Norton, the chef at Buttermilk Channel in Brooklyn, told me. While he does use lentils in his recipe, he balances them with a cooked grain (barley) and roasted mushrooms—two ingredients that came up repeatedly in my conversations. So I decided to take mushrooms and wheat berries (I love their chew) and combine them with pulsed-up chickpeas, a move inspired by the very good veggie burger at Memphis Taproom here in my hometown of Philadelphia. At this point I thought I was hot shit: Watch out world, this vaguely ethnic thirtysomething is singlehandedly smashing the veggie burger paradigm, man!

Next up was my binder(s): What was going to hold this trifecta together? A beaten egg and some mashed avocado sounded about right. So I threw them in, added shredded carrot and onion for a little crunch and savory backbone, and mashed it all up into patties that I promptly refrigerated at the advice of Nick Macri, a friend who runs the Philly butchery La Divisa Meats. (Note: I consulted Nick not because he works with meat, but because he used to make veggie burgers all the time at an old restaurant job.)

Nick also gave me some good advice on seasoning, which, along with texture, was my biggest area of concern. So many people feel the need to overcompensate wildly for a meatless burger’s perceived lack of flavor with spices they’d never dream of adding to a traditional meat patty. “I don’t think about Indian food when I think of burgers,” Nick said. “You don’t want cumin, coriander, and curry powder on something you’re grilling for the Fourth of July.” (Nick is Canadian, but don’t let that detract from this vision of Americana.) So I used only salt and pepper, plus a pinch of cayenne for a little heat.

I’d nailed from-scratch recipes without massive effort before, so I was feeling pretty confident when I yanked that first batch of patties out of the cooler and fired up a pan. But I could tell just by glancing at them that they were WRONG. The patties looked wet and greasy, and slumped over like the sad rock in the old Zoloft commercials. I coated them in yellow mustard (shouts to Animal Style), thinking it would help form an appealing crust. Instead, they disintegrated the second they hit the heat. Gross.

I went on to experiment with different ingredient ratios in the hopes that the patties would hold together better, but I kept running up against a formidable obstacle: water. Liquid, I discovered, is the Littlefinger of A Song of Veggie and Burger: You’re never entirely sure whether it is your ally or your enemy. Too much? Swampy, soggy mess. Too little? Dry, depressing bird food.

After another string of failures, I settled on a strategy: In order to get the results I wanted, I needed to cast off as much liquid as possible before the burger mixture came together, and then reintroduce binding moisture in other ways. So before making the mix, I threw the chickpeas in the oven to dry them out, went longer on roasting the mushrooms and passed them through cheesecloth, and laid the finished patties on paper towels to absorb any liquid that seeped out as they chilled. I even squeezed residual liquid out of the carrots and onions because every little bit of liquid purging makes a big difference. Small additions of bread crumbs and mayonnaise helped create a moist, consistent structure; the yellow mustard finally started doing its In-N-Out thing. Served on a Martin’s Potato Roll, a.k.a. the only roll one should ever use for a burger, it finally tasted good, in the most rewardingly unremarkable way possible. This is the narrative version of a cooking show where the host pops an uncooked turkey in the oven, then immediately yanks a perfectly roasted one out from under the counter. All these lessons took me several months and countless scream-into-a-pillow moments to learn. I would never say that the resulting method is (in the manner of food media hyperbole) the only veggie burger recipe you’ll ever need ever again for the remainder of your time on earth. But I will say that it works.

These burgers are not going to hoodwink a boorish beef enthusiast or unlock a chemical in your mind that will shut off your innate desire to consume flesh. They might even fall apart a little bit while you’re eating them. But they’re easy enough to construct, cook decently, and taste how I want them to taste. I’m happy with them. Thank you for joining me on this journey.

Finally, a veggie burger recipe that doesn’t turn out like a rubbery hockey puck. After cracking the code, the key is controlling the moisture, along with sourcing the proper vegetables for texture and binding. Note: You can make the patties in batches of two or three.