Get a free recipe
Subscribe
A Second Look at the Tuna Sandwich’s All-American History
By: Mari Uyehara Photos: Antonis Achilleos 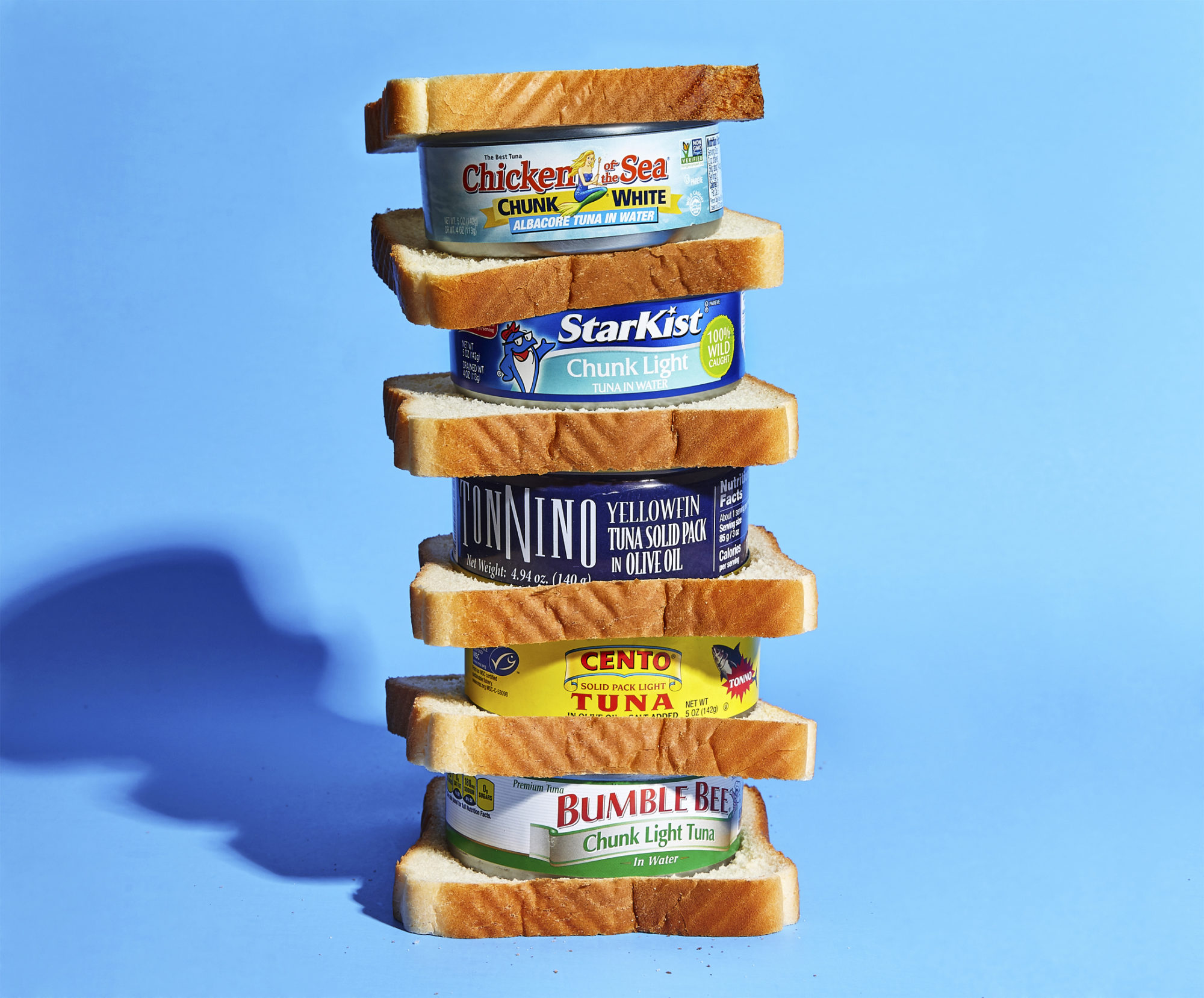 How Japanese-Americans helped launch the California tuna-canning industry—and one of America’s most beloved sandwiches.

It is hard to think of a food more emblematic of America’s working-class spirit than the humble tuna sandwich. While the Spanish make their tuna bocadillo with piquillo peppers and sherry vinegar and the French have their pressed pan bagnat, made with high-quality jarred tuna and an array of vegetables in a real baguette, the American version is an object of convenience and thrift.

Its assembly rests on three post–Industrial Revolution convenience foods: canned tuna, presliced wheat bread, and mayonnaise. The sandwich is portable, dependable, and eminently satisfying. If you want to make it fancy, no extra expense is required: Just pop it under the broiler to make a bubbling tuna melt. For many of us, the ultimate preparation is the one made at the kitchen counter of our childhood, whether the filling was mixed with crunchy bits of celery and red onion, sharpened with capers, mustard, and lemon juice, or freshened up with herbs.

That’s certainly how Steve Cook, who along with Michael Solomonov runs a collection of well-regarded Philadelphia restaurants, including Israeli fine-dining classic Zahav and casual deli the Rooster, sees it. “You identify with the way your mother made it,” says Cook, whose own mother favored a little mayonnaise and Dijon mustard, sweet pickle relish, and maybe some fresh dill. “It’s a neutral canvas.”

The thing about tuna, Cook says, is that you lose a lot of what makes it special when it’s canned in water, as it’s often sold in grocery stores. At the Rooster, they confit fresh ahi tuna to preserve a lusher texture rather using chalky chunks of fish from the can. (The dish is currently off the menu.) But when he’s making tuna for his kids at home, he has a trick: He mixes in canned sardines, whose oily richness helps revive the canned tuna, along with a touch of mayonnaise and mustard, sweet pickle relish, red onion, celery, and whatever herbs are on hand, and places it all on slices of wheat. There’s an added bonus to sardines. Unlike tuna, they are among the safest fish on the planet because they are smaller and lower on the food chain, thus less likely to accumulate high levels of mercury. A San Diego tuna cannery in the early 1930s

Unwittingly, Cook, in adding sardines, was honoring earlier canned-fish history in the U.S. As it turns out, the origin story of the tuna fish sandwich, like much in American life, is one shaped by natural resources, entrepreneurial brilliance, and immigrant influence. You see, originally, the vast majority of Americans didn’t consider the albacore tuna worth eating—it was fed to animals, used as bait fish, or pursued in sport fishing. In the 1800s, the canned fish that most Americans ate was the sardine, and what little canned tuna did come to our shores was imported by and for Italian immigrants.

That was the case until 1903, when a combination of overfishing and poor ocean conditions made for a terrible sardine season. So terrible, in fact, that sardine-packing businesses almost went under. It was then that one of those sardine executives, Albert P. Halfill of the Southern California Fish Company in East San Pedro, Los Angeles, went looking for alternative sources of fish, experimenting with halibut, rock fish, and, most successfully, albacore tuna, which was then abundant off California’s coast. At that time, the company’s product was extremely local: tuna caught off the coast and packed with California olive oil, which in later years was replaced with cheaper cottonseed oil.

There was still the roadblock of selling a product with no market for it. Through a combination of free tastings of the product at county fairs and in stores, tins given away for free with purchases of coffee, and marketing campaigns comparing tuna to the white meat of chicken, tuna started to catch on. The albacore’s selling point of being like the chicken breast, a similarly dry and mild meat, also came to define its preparations, which required adding in moisture and flavor. Bluefin tuna, then cheap and more abundant, was too oily and strong for early 20th century America’s palate.

Tuna—sometimes called “tunny”—was easily swapped into chicken and fish salad recipes. In the 19th century, scraps of chicken or salmon, white fish or trout from dinner were mixed with mayonnaise and homemade pickle relishes, also leftover from dinner, and served on lettuce for lunch. As women started spending more time in public life, at department stores and later offices, lunch counters started offering these salads between two pieces of bread to encourage customers to take it to go. When canned tuna became available in the early 20th century, home cooks and lunch counters could just open a can instead of cooking chicken or fish first.

The tuna salads of yore bear a lot of resemblance to those today, made with assorted elements of crunch, piquancy, and moisture: celery, various herbs, pickle relish, grated onion, mustard, and mayonnaise, as well as some ingredients, like beet juice and whipping cream, that have since fallen to the wayside. Tuna fishing at the turn of the century

Tuna’s reputation rapidly changed from “nuisance” fish to lunch-counter staple and, for some time, enjoyed a spot on the menus of upscale Los Angeles restaurants. In 1913, there were nine plants in operation along the California coast, producing 115,000 cases annually, and that grew to 36 canneries in the span of five years. That growth happened in part because of the inventive and industrious fishing methods of immigrants from Japan based in Los Angeles and San Diego.

In 1901, 12 Japanese men, former railroad workers in Los Angeles who immigrated from Wakayama prefecture, started diving for abalone off San Pedro in Los Angeles and soon noticed albacore tuna there. In 1912, Masaharu Kondo, a former professor at the Imperial Fisheries Institute in Tokyo, founded M.K. Fisheries Company in San Diego and introduced two major innovations to the California tuna industry, earning him the moniker the Fish Magnate of California. First, the Japanese fishermen he recruited used bamboo poles with a short line and barbless hook.

Some canners were skeptical of the method’s efficiency, but when they attempted to employ other technology, like nets, they were unable to meet the productivity of the pole fishermen—it remained the main method until the 1980s, when albacore populations declined and the industry turned to trolling jigs. Kondo also brought the first refrigeration ships to San Diego from Japan—a revolutionary move—so that fishermen could travel long distances and transfer the fish without them spoiling. It became an industry standard. And it was vital as Kondo and his Mexican-born partner Aurelio Sandoval chased tuna to Mexican waters. In something of a Japanese-Mexican-American partnership, the pair also used a Japanese chemist, Tatsunosuke Takasaki, who had experience in Japan’s sardine canneries, to oversee their canneries, where both Japanese and Mexican workers were employed.

By 1914, more than 150 Japanese fishermen operated 50 of the 140 albacore vessels in San Pedro. Los Angeles’s Terminal Island was dubbed Little Nippon, with its own “tuna street” and a vibrant immigrant community, with Buddhist temples, a judo hall, and kendo schools. According to a 1917 article in industry journal Pacific Fisherman, “the Japanese taught the Americans and all the others how to catch tuna in commercial quantities, and they are the best fishermen in the game. As a result, the packers vie with each other in providing them with attractive quarters close to their respective plants.” The others being Portuguese, Italian, and Mexican immigrants who also worked as fishermen in California.

It’s a story, an American story, that has familiar reverberations today: The Japanese immigrants, who were a vital part of the American food industry, were vilified. As food historian Andrew F. Smith thoroughly and thoughtfully chronicles in the “Enemy Aliens” chapter of his book American Tuna, Japanese men were forbidden by law from marrying white women, excluded from owning land, and labeled as “undesirables.” William Randolph Hearst’s media company, with local newspapers like the San Francisco Examiner, was the Fox News and Breitbart of the day, then running anti-Japanese editorials laced with conspiracy theories and racist paranoia, including false accusations that Japanese-American tuna ships were engaged in spying and reports targeting Kondo and Takasaki.

Nativists tried to ban the Japanese from fishing, which failed at first, and politicians catered to them by stirring anti-Japanese sentiment. But with the attack on Pearl Harbor, they had the pretext they needed. In 1942, after decades of racist slander, the FBI raided Terminal Island, arresting boat owners and other Japanese-Americans, 3,000 in total. They were the first Japanese-Americans sent to internment camps—one of the worst violations of civil liberties in American history. Their boats were seized, and a total of $130 million in property was stolen or destroyed. After the camps let out when the war ended in 1945, most of the Japanese-American fishermen never returned to the trade. It took decades for American attitudes towards its citizens of Japanese ancestry to soften and normalize (while others, unfortunately, have flared up as new xenophobic paranoias have taken hold). Eventually, after the wounds of war scarred over, tuna salad made it over to Japan, where it became a common filling in the Japanese rice ball onigiri and a staple sandwich in the country’s famously good convenience stores, like 7-11, and at home.

There it is sandwiched between slices of shokupan, the fluffy white milk bread, and often moistened with Kewpie, the rich, tangy mayonnaise made with rice vinegar, twice the egg yolk of American brands, and MSG. Tochihiro Nakashima, the creator of Kewpie, first encountered mayonnaise in the U.S., launching the now iconic brand in 1925. When I tried it recently along with my old favorite, Hellman’s, in two batches of tuna fish salad, I found that it simultaneously rounded out the salad’s overtly fishy notes, while somehow making it taste more clearly like itself. In some ways, it seemed almost poetic to bring together the U.S.-inspired, Japanese-made condiment with the canned fish sustained in its American infancy by Japanese immigrants. But that aside, it was also just more delicious.