Get a free recipe
Subscribe
The Tyranny and the Comfort of Government Cheese
By: Bobbi Dempsey Illustrations: Ellie Skrzat 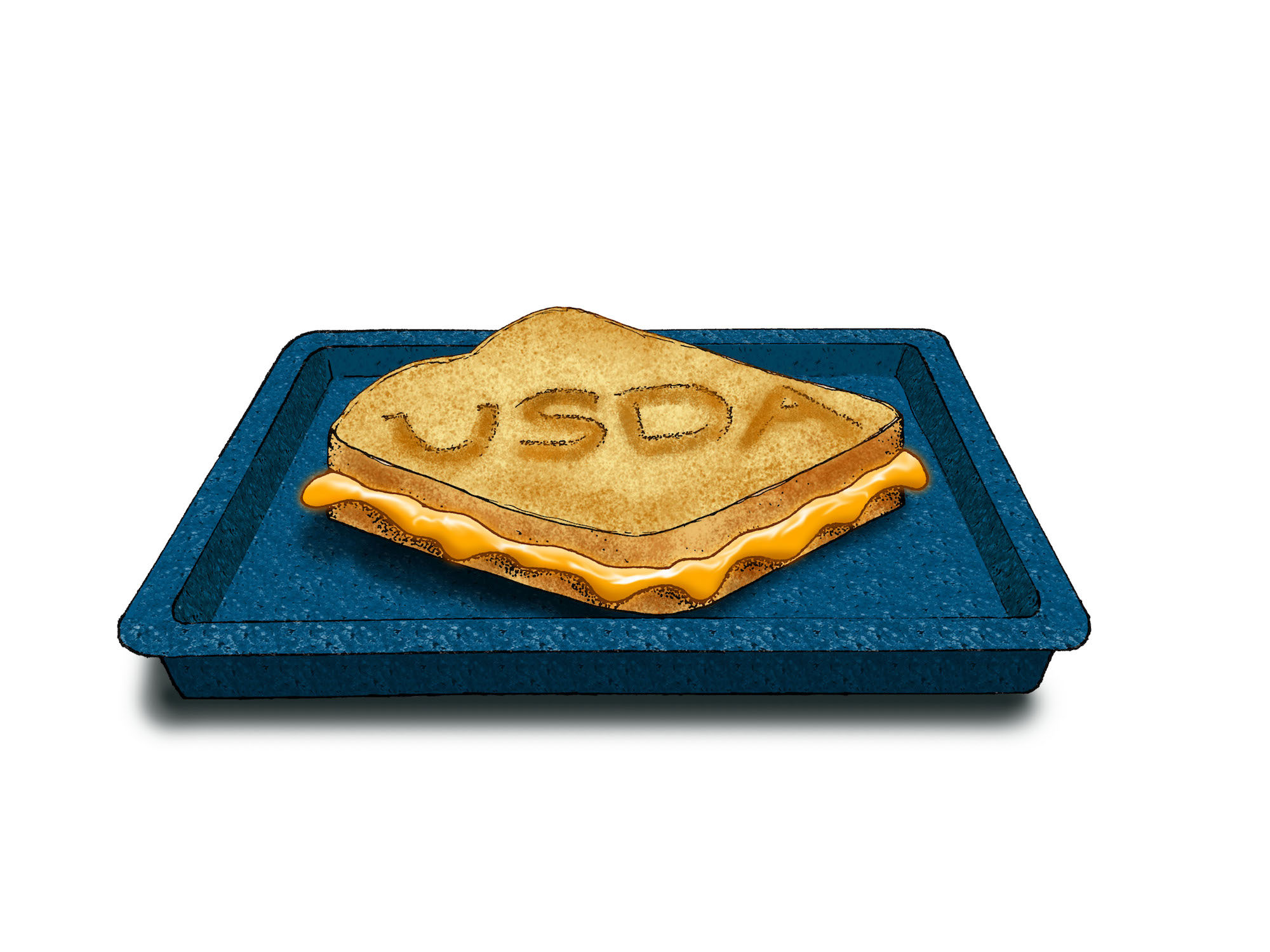 Government cheese shows up in the punch lines of jokes and song lyrics, but to those who have actually lived on it, it’s both a cornerstone of survival and an object that inspires complicated tinges of nostalgia.

If you grew up poor in the ’80s, like I did, you couldn’t escape it. The telltale brick-shaped carton encasing a Dayglo orange matter that provided equal parts sustenance and humiliation: government cheese.

It was sometimes also known as “surplus cheese,” although many people don’t know the story behind that term. In the early 1980s, the U.S. found itself with massive stockpiles of dairy products, thanks to a wide range of price-support programs and economic initiatives intended to benefit farmers and food producers of the time. Faced with literally tons of cheese to dispose of, the government decided to unload it on the poor. Congress passed the Agriculture and Food Act of 1981, which allowed the U.S. Department of Agriculture to develop programs to give a bunch of these dairy products to families struggling to get by. That year, President Reagan announced the Special Dairy Distribution Program, which would oversee the distribution of roughly 30 million pounds of cheese to people struggling to make ends meet.

Perhaps the intent was altruistic, but like most poor kids, I was way too cynical for my age. I assumed they were just trying to kill us all off with enough excessive fat and cholesterol to give us heart attacks before we hit high school.

The one thing you could count on was the five-pound block of shelf-stable orange cheese in the rectangular box with USDA stamps all over it.

My family has been struggling to keep our heads above water since the day I was born, following in the footsteps of generations before me. My family survived, sometimes just barely, on the patchwork of public assistance programs we had access to at any given time. We moved dozens of times before I finished high school, bouncing around from cramped apartments in rough sections of Brooklyn to row homes in blue-collar towns in Pennsylvania coal country, sometimes crashing with relatives or wherever we could find shelter. There was virtually no stability, financial or otherwise. We could only usually hope to go grocery shopping twice a month: on the first of the month (check day) and whenever food stamps were disbursed. The modest provisions we got on those occasions went quickly and could only sustain our family of five—six if my father happened to be out of jail at the time—for a short time.

In between our precious twice-monthly visits to the grocery store, we were kept alive by eating whatever we could get our hands on. Often that meant these government surplus items (including, in addition to cheese, butter, flour, powdered milk, and a few other items). The specific offerings of those “government giveaway” programs depended on the month and which program or agency was handling it. But the one thing you could count on was the five-pound block of shelf-stable orange cheese in the rectangular box with USDA stamps all over it. Like many recipients, we never knew exactly what unique combination of food products went into concocting government cheese, and we figured we were probably better off not finding out. Some government materials kept matters opaque, referring to it as “pasteurized process American cheese,” but it’s unclear what, if any, difference there is between that and plain old regular “processed cheese” or the even more mysterious “cheese food” that you see in the grocery store dairy section. Sometimes the cheese was hard and dry—tough to cut, with a tendency to crumble when you tried. Other times, oddly, it was soft and adorned with a glistening sheen that was far less appetizing than anything with the word “sheen” has a right to be.

While the taste has been described in many ways, the general consensus is that it could best be categorized as a sort of mild cheddar. Many people have compared it to Velveeta—or, at least, the poor man’s Velveeta.

As a child in an abusive and dysfunctional environment full of constant upheaval, you cling to anything that brings you even the slightest bit of comfort or stability.

In the school cafeteria, or when a friend came over and peered in the fridge, the cheese was a source of infinite shame—a clear indicator of our financial situation. But when no one else was watching, my siblings and I liked the cheese, or at least learned to tolerate it. My younger brother was probably the biggest fan, believing then (and now) that it made for the best grilled cheese sandwiches. We once made a song about what we often called “govment cheese,” sung to the tune of “Let It Be.” (Turns out we were ahead of our time musically—this was years before Kendrick Lamar mentioned government cheese in his song “Money Trees.”)

In some ways, the orange bricks served as a “luxury” item—the closest thing we had to a comfort food. As a child in an abusive and dysfunctional environment full of constant upheaval, you cling to anything that brings you even the slightest bit of comfort or stability. Among the very few constants were persistent hunger and whatever could help stave it off. The ever-present cheese was a desperately needed element of the familiar.

When I was growing up, government cheese was available as an additional resource, a supplement to food stamps and any other programs the government offered at the time. Under a plan unveiled earlier this year by the current administration—a proposed program that the Department of Agriculture has dubbed “America’s Harvest Box”—many low-income people who qualify for Supplemental Nutrition Assistance Program, or SNAP, would get the cheese and other surplus, “shelf-stable” food items, preselected by the government, instead of half of their food stamps, not in addition to them.

This means resources people on the brink could use to buy the few precious food items they can choose on their own would literally be cut in half. Barely making ends meet often means sacrificing personal autonomy. Allowing people struggling to get by, particularly parents, the freedom that many others take for granted—the ability to select the basic items they can use to feed their family—is a small yet powerful allowance that lets people maintain one of the few vestiges of control they have over their own lives.

Recently, our family came full circle, as my mother began once again receiving the blocks of government cheese as part of food boxes distributed to low-income senior citizens. My mother’s dietary restrictions prevent her from eating the cheese, so she passed it along to me and my sister. Seeing the same brick-shaped boxes I know so well, I immediately felt the old familiar contradictory mix of emotions—shame plus something like reverence for this staple of my childhood that provided my family with critical sustenance.

While I personally don’t have strong feelings about the taste one way or the other, I must give the cheese a sort of begrudging respect—an attitude I seem to share with Kendrick Lamar and the Wahlbergs, who famously still use the cheese at their burger chain, Wahlburgers. The cheese provided a sense of autonomy and power over a tiny part of our daily survival, its versatility giving us the freedom of choices within our limited menu. It might seem like a simple thing, but in a life defined by lack of control over your own existence, it’s a luxury you don’t take for granted.

This feature was supported by the nonprofit Changewire.

Bobbi Dempsey is a freelance writer whose credits include The New York Times, Harper’s, and Parade. She is the author of Degrees of Desperation: The Working-Class Struggle to Pay for College. Find her online at www.bobbidempsey.com and on Twitter at @bobbidempsey.