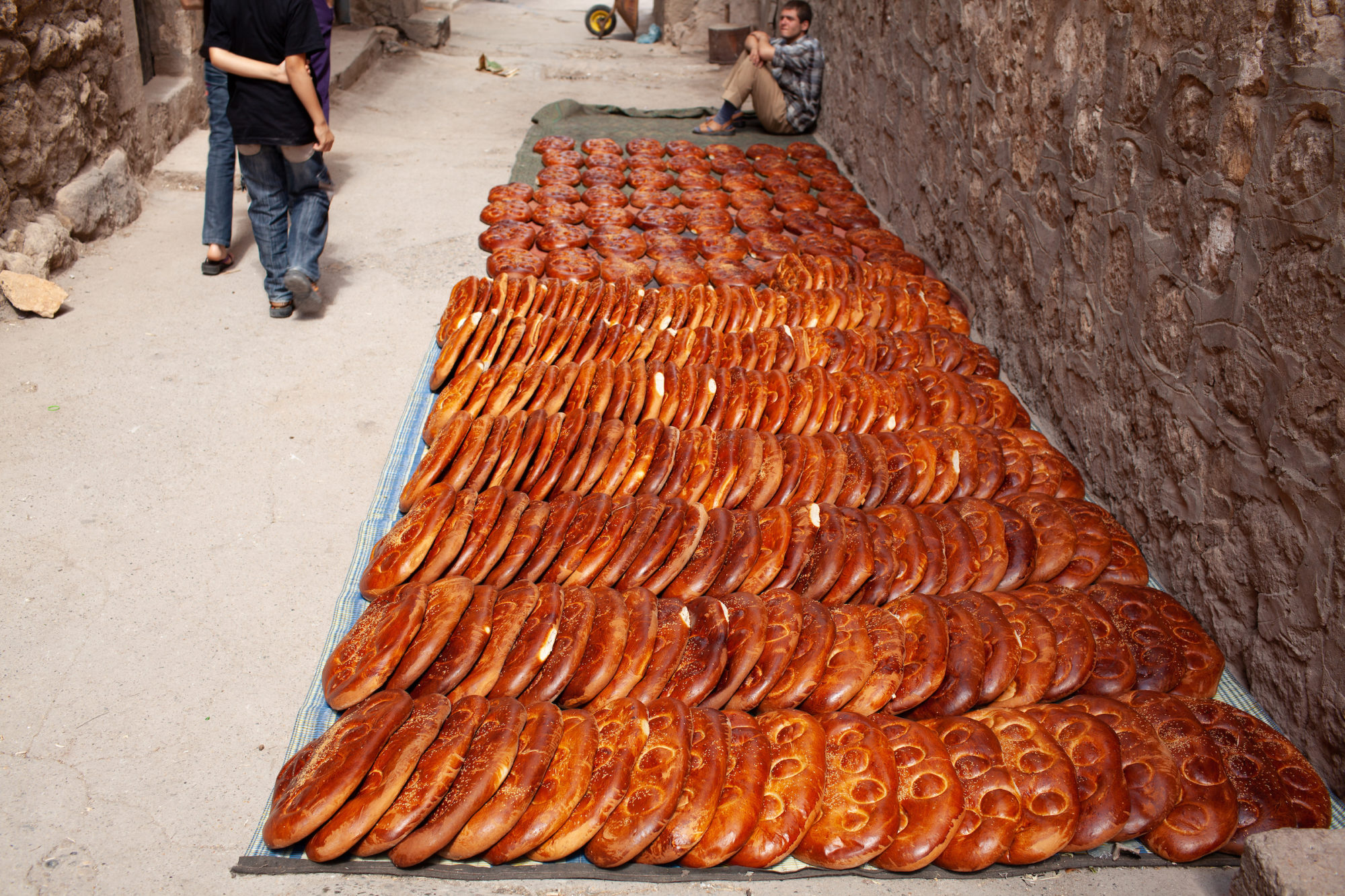 The ground pit of a cherry, known in Turkey as mahlep, can be hard to put a finger on, but quite a few Turkish pastries, ice creams, and drinks wouldn’t be the same without it.

Every morning in Mardin, a Turkish city of ancient honey-colored limestone buildings set atop a hill overlooking the Syrian plains, the twisting lanes are imbued with the scent of warm spices wafting from the steps of bread bakeries as staff lay oval-esque coffee-hued loaves bearing distinctive circular scores out front to cool. Called iklice, the breads are a specialty of Mardin’s dwindling Syriac Christian community. Dense, chewy, and lightly sweet, they evoke southeastern Turkey’s Silk Road status with a mix of spices: ginger, anise seed, and cinnamon. But the essential ingredient in iklice is mahlep, a spice that exudes a seductively sweet perfume that combines flowers and fruit, toasted nuts and vanilla.

Mahlep are tiny kernels collected from the dried, cracked pits of St. Lucie cherries (Prunus mahalab). Sold whole or more often ground into a somewhat coarse powder the color of ground blanched almonds, the spice is a fixture in most Turkish pantries. It’s used to flavor yeasted breads and sweets like iklice and pogaca, the half moon-shaped buns sold from wheeled carts in the morning in Istanbul; a figgy milk pudding called uyutma; and bulamac, a warm sweet soup (or cool pudding) made with fruit molasses, walnuts, and sesame seeds. When I first tried iklice in Mardin I couldn’t identify the not-quite vanilla, vaguely nutty sweetness that haunted the back of my tongue after each bite. “Cinnamon? Nutmeg? Cloves? Orange peel?” I interrogated a baker in one of the bakeries on the city’s main street. “Mahlep. Without mahlep, it’s just spice bread,” he replied. Intrigued, I began asking around about mahlep and realized that in previous travels in Turkey I’d unknowingly encountered plenty of it. I’d drunk it on ferries in Istanbul in winter in sahlep, a milky hot beverage named for the dried root of the variety of wild orchid that thickens and flavors it. I’d appreciated it all over the country in plain (unflavored) versions of dondurma, Turkey’s famously stretchy ice cream. In the southern province of Hatay I’d swooned over plates of mahlep-scented kadayif, the syrup-soaked wheat vermicelli cake browned in butter and oozing fresh cheese that’s also served, in various guises, across the Levant. In the mostly Kurdish city of Diyarbakir, in Turkey’s southeast, I’d watched bakers prepare mahlepli corek, diamond-shaped buns dusted with nigella and sesame seeds that were likely introduced to the city by Armenians (in Armenia, mahlep-flavored breads are called choeregi). In Ciya, a front of regional Turkish cuisine on the city’s Asian side, I’d tasted meatballs seasoned with a pinch of mahlep and served in a tart cherry sauce, a dish originally from Aleppo.

Like saffron or chervil, mahlep can be hard to pinpoint in a dish, yet there’s no mistaking it in its uncooked state. On its own, it’s sharply, mouth-twistingly bitter—which means that when you’re cooking with it, less is more. Its unfamiliarity elevates, ever so slightly, dishes that are otherwise unremarkable. Some have described mahlep as the vanilla of Turkey, and that’s a good point from which to begin to think about using it in your cooking. Try subbing mahlep for vanilla in puddings, cakes, and cookies. Last Thanksgiving I did just that with a pumpkin pie recipe I’ve been using for years; to a one, everyone at the table declared 2018’s pumpkin pie my best ever. A good rule of thumb is to think of mahlep as subtle but powerful, like nutmeg. Start with less, add it in small amounts, and taste frequently. For bread, start with about 2 teaspoons per pound of flour if you’re adding mahlep on its own, or a bit more if you’re combining it with other spices (the dried spices we think of as warm, like nutmeg, cinnamon, anise, ginger, even black pepper, are great candidates). For liquids (milk, cream, eggs), think ½ teaspoon mahlep per 12 ounces of liquid to start.

You’ll find ground mahlep (usually in small amounts in sealed packets, like dried yeast, and variously labeled mahlab, mahleb, or mahlepi) in Turkish, Middle Eastern, and Armenian groceries. It’s easily available online from Tulumba (a great source for Turkish ingredients), Kalustyan’s, and even Amazon. The small sealed packets prevent the mahlep from becoming exposed to air and losing its fragrance.

All this summer I’ve been baking mahlep with stone fruit—clafouti, crisps, cobblers, pies, bread puddings. It’s probably no surprise that a spice made from the kernel inside the pit of a stone fruit has an affinity with, well, stone fruit.

Heavy on fruit and enriched with cream and an extra egg yolk, this summery bread pudding pairs fragrant mahlep with stone fruit. Use torn pieces of bread (including crust, which adds texture) from a substantial loaf that’s gone stale (or heat torn pieces of bread in a 200°F oven until the bread is completely dry). Substitute nectarines or apricots for peaches, or use a mix of fruits. If you prefer your bread pudding with less browned surface area, bake it in a 2-quart soufflé dish (allow an extra 5 minutes or so in the oven for the custard in the middle to cook through).

Serve slightly warm, at room temperature, or straight from the refrigerator (the pudding firms and becomes quite dense as it cools) with cream, ice cream, or nothing at all.

Robyn Eckhardt is the author of Istanbul and Beyond and co-publishes the award-winning food blog EatingAsia. Follower her on Twitter at @EatingAsia and on Instagram at @IstanbulandBeyond.