Get a free recipe
Subscribe
The Truth About Balsamic Vinegar
By: Michael Harlan Turkell 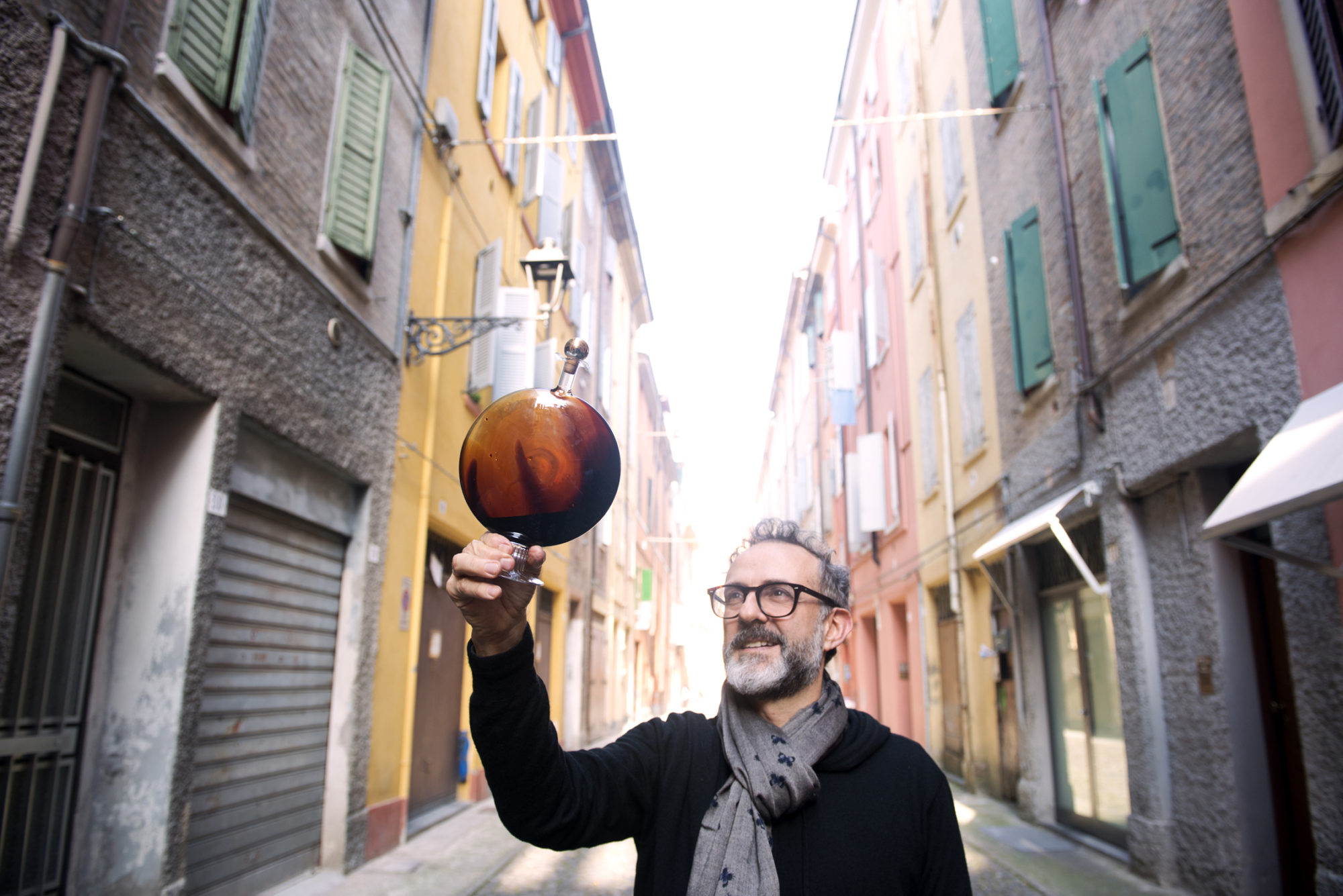 A river of black gold flows from the cities of Modena and Reggio Emilia straight to your home kitchen.

Aceto balsamico, better known as balsamic vinegar, is arguably the most famous and prized vinegar in the world. Having written a book on the production and usage of vinegar throughout history, I get the most questions about balsamic vinegar. While balsamico plays a small role in Acid Trip, there have been over 100 other publications that document and debate the origins of balsamic vinegar. After a few visits to Emilia-Romagna, I became more intrigued by balsamic vinegar’s rise to fame. How did an unquestionably inimitable ingredient ever come to be so coveted around the world?

Although balsamic vinegar production has been documented as dating back thousands of years, it’s only been since the mid-1700s that today’s standard recipe—an inky liquid with striking acid and well-founded profundity—became the norm. The word “balsamico,” rooted in the word “balm,” refers to the resin of the balsam tree. The etymology carries medicinal and soothing connotations, but the product itself isn’t made from sap. The familiar recipe involves cooking down Trebbiano and Lambrusco grape must (freshly crushed grape juice), varieties indigenous to the Emilia-Romagna region. The resulting juice—eventually syrup—is transferred over the course of many years through a series of barrels, called a batteria, descending from 100 gallons to about 10 at its smallest, like a series of nesting dolls, each one imparting a specific flavor and structure to the final product. The barrels are made from a number of different woods (traditionally seven varieties), including oak, ash, and cherry. The vinegar spends anywhere from a minimum of 12 years to more than 25 in some cases (those earn the rank of “extra vecchio”—extra old) on its journey. But after spending time with a handful of families and their batterias, I learned that what happens in those barrels over time is what gives the vinegar its mysticism; this liquid is an extension of family, literally.

Balsamico was never intended to be more than a dowry. Beginning in the 1800s, the vinegar was uniquely produced by mothers for their newborn daughters. On their wedding day, daughters would be gifted their batterias. A slow and steady river of this “black gold” pours from the sibling cities of Modena and Reggio Emilia, the only two regions in the entire world certified to produce the nonpareil vinegar. And while both exist in the land of fast cars (Ferrari, Maserati) and slow foods (Parmigiano-Reggiano, prosciutto di Parma), I’ve taken a long and winding bus through their lush rolling hills, fortressed amongst medieval municipalities. I’ve seen vinegar makers concealed amongst its mosaics, a tradition upheld with utmost patience. On a visit to E-R, your quest for balsamic enlightenment should begin at the Museo dell’Aceto Balsamico Tradizionale in Spilamberto, where an assemblage of artifacts, and a full tutorial on the traditional methods of balsamico making, are on display. Or one can befriend a modern maestro, like Mariangela Montanari of La Cà dal Nôn in Modena. Motanari gives a different perspective on the cultural significance of balsamico, as she’s been working in an acetaia since her preteen years, literally following in the footsteps of her father through the lofts of their home attics.

Traditionally, balsamico is made sotto tetto, or under the roof. The batterias are stored in home attics, the warmest part of these buildings— allowing them to absorb the peak heat of summer that starts the necessary fermentation process that gives balsamico its undeniable flavor over time.

On a visit, Montanari gave me a priceless bottle of Demetria, named for her grandmother who passed away a few years back. The vinegar is perfumed with jammy mulberries from the wood of the barrel, the same scent Motanari remembers coming off the steam of the boiled potatoes her grandmother would dress in a thick black slick of balsamico. What I’ve learned in researching these vinegars is that these days traditional balsamico is no longer familial. Although it might seem like balsamico’s an old staple, it’s actually only been on the world stage for about 50 years—and even most Italians outside of the Emilia-Romagna region had very little experience with the product before that.

Unfortunately, with this international growth, the quality of the product has suffered, and the majority of balsamic vinegar today is made via an industrial process involving stainless steel tanks, acetators, an overly complex and intentionally confounding labeling system, and an overabundance of unregulated imposters. That is, most of the balsamic you encounter today isn’t really balsamic at all. Those salad bar “balsamics” and glazes aren’t real.

While it’s true that thousands of Italian families still make balsamic for their own consumption, there are only about 300 balsamic vinegar producers certified to sell the most authentic of traditional balsamic vinegars, those that can call themselves DOP Tradizionale (Denominazione di Origine Protetta), a quality assurance. The annual yield of commercialized DOP balsamico is only about 7,500 liters. At 100 ml per bottle, that’s only 75,000 bottles in total—for the world.

Some of those bottles can cost upwards of a couple hundred dollars a bottle, which may seem excessive, but I swear to you: If you have the good stuff, it’s worth it. Let’s assume that there are about 20 drops per ml. That’s 2,000 drops per bottle, which is, on average, only a dime a drop. There’s a reality: quality problem when faced with 250 ml or 500ml bottles of balsamic vinegar (or “balsamic vinegar”) sold on the supermarket shelf for under $10. Be warned: This is a cheap knockoff of the prized products of E-R. And here’s the problem with the imitators: If we don’t recognize the value of the authentic aceto balsamico, we’ll eventually be without it, as the cost of production outweighs the need to produce more.

Clearly, there’s way more balsamico in the world than 75,000 bottles. Balsamic vinegar is a $1 billion market, with economics driving the range in quality and authenticity. IGP (Indicazione Geografica Protetta) balsamico —which is the less strict of the two major denominations (DOP and IGP)—counts for about 100 million liters, over 90 percent of which is exported. IGP was a democratic answer to the high demand of an exclusive product (DOP).

DOP balsamico is highly regulated by a consortium, which oversees the production and certification of these vinegars. What I’ve come to understand as a private society of tasters rigorously screens each batch for quality control, assigning red, silver, and gold labels in Reggio Emilia, and white and gold caps in Modena, to the vinegars that meet (and exceed) their standards. Sadly, the grapes used to make IGP can come from anywhere in the world, as long as the grapes themselves begin the balsamic-making process within the DOP region and stay there for at least 60 days. After that, they can be transferred to facilities all over the world. What’s lost is not only the distinct flavor of a region, but also much of the character and nuance— similar to what happens with a poorly made wine. Some IGPs are above board, but a lot aren’t, and it’s hard for the consumer to know which is which. Upon tasting them side by side, there’s no comparison: One smacks of passion; the other, a clumsy kiss. The resemblance is little more than an unbalanced appearance of acidity and color, maybe a twice-removed cousin, but barely family.

There’s also credible version of balsamicos in the midrange between IGPs and DOPs called condimento, which I’ve been impressed with—not only for their flavor, but for their affordability. These tend to have more individual character but don’t fall within the bounds of what balsamico has historical been, which leads to their demise with the consorzio, but actually makes them pretty interesting. Each maker has their own expression, seen through changes in season and sometimes the order of the barrels and time in which they sit in each one. While the overall story of balsamico is heavy on how it’s made, I think the most important chapter is about how it’s used. I’ve learned that there are a few rules to live when it comes to true balsamic vinegar. First: Consider it a condiment, not an ingredient in a recipe. Second: Never cook it; it’s already been “cooked” for at least 12 years by time. With that in mind, it’s superb over substantial shards of various ages of Parmigiano-Reggiano cheese, or slightly warmed over a plate of risotto alla Parmigiana, or with a bowl of tortelli di zucca (squash-stuffed pasta).

It seems overzealous to submerge a hot seared filet of beef or even cold sliced bistecca in balsamico, but I’ve witnessed both, as routinely as I’ve seen it topping cold and creamy panna cotta or gelato for dessert. Even a small sip from a spoon as an after-meal digestive makes sense, but there’s a slight socioeconomic hitch: In its unhurried recipe, how long until there’s no “real” balsamic vinegar left? In this day and age of faster, bigger, easier, can something so traditional survive? It’s up to us to hasten our appreciation for aceto balsamico, that we’ve already waited this long to enjoy.