Get a free recipe
Subscribe
This Tamales Story Is Still Being Written
By: Nico Vera 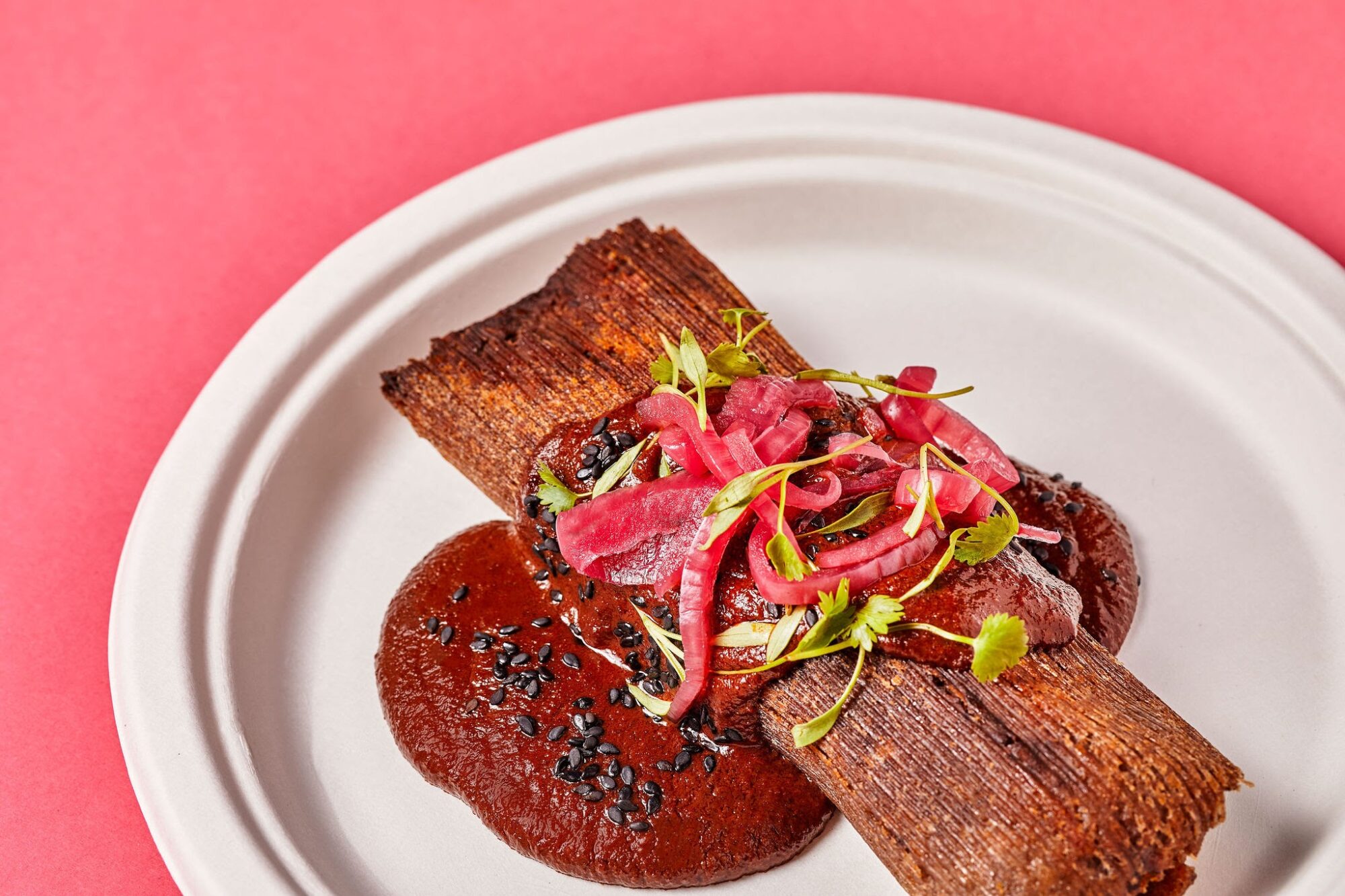 Everywhere there’s corn, there are tamales. From the Pacific Northwest to Patagonia, families make masa, wrap dollops of dough with savory fillings in corn husks, then steam them by the dozens. As small packages reminiscent of the comforts of home or of traveling street food, tamales are original Indigenous sustenance.

We often think of tamales as practical and economical doughy vessels holding various meats. But today, cooks, farmers, and producers are innovators and artisans that use a variety of ingredients, grow corn in new regions, and nixtamalize maize for fresh masa to reshape what tamales can be—from savory to sweet, meat-centric to plant-based, traditional to modern—while still connecting the dish to its past.

Throughout Latin America, restaurants serve tamales year-round, but to some families, tamales are a multigenerational Christmas tradition—sold in bulk for celebrations during the holiday season. For Los Angeles–based Jocelyn Ramirez, chef and founder of Todo Verde, her abuelita’s tamaladas were a December rite of passage. “It meant bringing together the women in the family, who had specific roles to play in assembling the tamales, hundreds of them,” she recalls about the tradition she’s striving to preserve.

Ramirez’s tamales are rooted in the plant-forward ingredients of her Mexican heritage. She makes a masa harina dough and looks to meat alternatives for the filling: “Jackfruit has that shredded chicken or shredded pork feel, but mushrooms give you that umami flavor and meat-like texture.” It’s clear that there is room to take tamales in many directions.

Everywhere there’s corn, there are tamales.

In her 2020 cookbook, La Vida Verde, Ramirez has a steamed tamale recipe with activated charcoal that turns the dough black, against which chile rojo, white cashew crema, and red chile threads pop on the opened tamale. In another, strawberry and rose water infuse flavors of agua fresca in a sweet and aromatic dessert tamale. Ramirez also told me she’s pondering making tamales part of a dish. “Can you sear a tamale so that it’s slightly crispy and then add it to some sort of a soup?”

Starting in the 16th century, Spain’s colonial foodways transplanted tamales from Mexico to South America and the Caribbean. That intersection created Venezuela’s hallaca, a creole tamale with a filling reminiscent of the ground beef in empanadas. But in Columbia, Missouri, chef Gaby Weir Vera breaks from tradition to cook her home country’s savory hallacas.

“Everything about the hallaca is meat. The dough is flavored with lard; the filling itself is pork, chicken, and beef. And then you also put in bacon pieces as you’re wrapping that up,” says Weir Vera. “So it was a big deal for me, as a Venezuelan, to make a vegan hallaca,” she adds.

Weir Vera considers hallacas tamales, but with some differences. “The emphasis is more on the filling, with a higher filling-to-dough ratio, and besides being thinner, the dough is also sweeter.” To veganize hallacas, Weir Vera cooked a guiso filling of lentils, chickpeas, and mushrooms; replaced the lard with robust olive oil plus annatto seeds for color; and incorporated a rich broth into the masarepa dough—all wrapped in banana leaves, tied with string, to simmer submerged in a pot with water.

“The industrialization of masarepa revolutionized the way that Venezuelans make arepas and now take arepas and hallacas to the rest of the world,” says Weir Vera. The cooked cornmeal in masarepa yields hallacas, arepas, and empanadas, but it’s not nixtamalized, so it’s somewhere between fresh corn and nixtamalized masa harina. From Weir Vera’s childhood home in Mérida, Venezuela, where she learned to cook from her mother and grandmother, the Andes Mountains rise to become the backbone of South America, connecting seven countries from Venezuela to Argentina and passing through one of the birthplaces of corn: Peru’s Sacred Valley.

There, Josefina Rimachi, chef de cuisine at Chuncho, prepares humintas—fresh corn tamales—like her Quechua ancestors did thousands of years ago. “From January to April, we harvest the fresh corn to make humintas. The rest of the year, we make tamales with dry corn,” says Rimachi about cooking seasonally.

To make humintas, she peels fresh corn; grinds it; stirs in butter, anise, and sugar; mixes everything by hand; then adds anise liquor or cañazo, a local sugarcane juice rum. After wrapping the spiced dough in corn husks, she places the bundles on a bed of hay in a pot with water to steam and covers the pot with a moist cloth for about 20 minutes.

Using ashes from a wood stove, Rimachi nixtamalizes dry corn to soften it before grinding. “Humintas have more air and the taste of sweet corn, while tamales are drier and taste like flour,” she says. Humintas can be savory, with a cheese filling, but for a dessert version, Rimachi stuffs the ground corn dough with chocolate truffles she infuses with maracuya or coffee.

“We used to make humintas only for special occasions, like weddings, baptisms, or birthdays,” says Rimachi. But today, they are more common, and local street vendors hawk humintas for breakfast from 6 a.m. to 10 a.m. at the entrance to the local market.

Cultivating corn and cooking humintas connects Quechua people in Peru with Navajo communities in North America that make kneel down bread—Indigenous fresh corn tamales. In Upper Fruitland, New Mexico, Justin Pioche, chef and owner of the Pioche Food Group, is experimenting with modern ways to cook the food of his Diné ancestors.

“I remember eating kneel down bread as a little kid. Whenever our people would harvest the corn, everybody would get together as a community,” recalls Pioche. “One person or one group of people would be taking care of the kneel down bread—grinding it, putting it in the corn husks, and then getting the oven ready,” he adds.

“I love huitlacoche. It’s a very beautiful product to me because it’s a different flavor. It’s like a mushroom, so a lot of people call it the Mexican truffle,” says Pioche. And adding MSG packs in umami. “There’s a whole different mouthfeel with the corn. It becomes super flavorful, like adding a bunch of butter to it—it reminds me of creamed corn.”

Despite Pioche’s contemporary approach, he sometimes cooks kneel down bread the old way. “I really do enjoy the experience of building a fire and then throwing it into the ashes and cooking it like that. To me, that makes everything more special nowadays,” he says.

In the kitchen of Three Sisters Nixtamal, a woman-owned company named after the Indigenous foods trio of corn, beans, and squash, archeologist Pedro Ferbel-Azcárate uses ground food-grade limestone to nixtamalize organic corn he sourced from New Mexico. After soaking the corn in large tubs and then straining it, a lava stone, much like a metate, grinds the corn into a wet masa.

An all-woman crew bakes the fine grind into tortillas and packs the wet coarse grind for home cooks, street food vendors, or restaurants to make tamales. But the rising cost of fuel to transport their corn motivated Ferbel-Azcárate to try something new. “We’ve been working with plant breeders and farmers who are excited about growing corn in the Pacific Northwest,” he says about a corn that will adapt to the local bioregion.

The short growing season and the rain can make it challenging to grow corn, but after several trials, they succeeded. “We are Indigenizing corn. The corn is telling us how it wants to be planted in the Pacific Northwest,” says Ferbel-Azcárate about the now locally grown green corn that one day may be on the map of Indigenous foodways.

Across the United States, tamales are an immigrant dish that Latinx street food vendors cook for urban commuters and working-class families. But according to Sandra Gutierrez, author of the 2013 cookbook Latin American Street Food, there is one place where tamales are deeply woven into America’s food culture: the Deep South.

“In the Mississippi Delta, African American workers picked up the tradition of tamales from Mexican workers. They would sit down, eat together, and exchange foods,” says Gutierrez. “So African Americans in the South created hot tamales, their own variety with cayenne pepper, and they’re very, very spicy,” she says about the tamales that are wrapped and packed upright in a pot with water to simmer, forming a bouquet of corn husks with the top ends open just above the water.

“To taste the spirit of the Americas, you must discover the world of tamales,” says Gutierrez about the food that connects Latinx, Afro-descendant, and Indigenous communities. The labor and intention that goes into making tamales honors our ancestors and may be the antithesis of fast food. There’s also an element of warmth, comfort, and nostalgia imbued into the wrapped, portable, corn bundles that families cook for special occasions or exchange during the holidays. Quite simply, Gutierrez believes, “Tamales do resemble little gifts, and people love to open presents.”