Get a free recipe
Subscribe
This New Native Kitchen Is Stocked with Prickly Pear and Hominy
By: Rachel Wharton Illustration: Nick Hensley 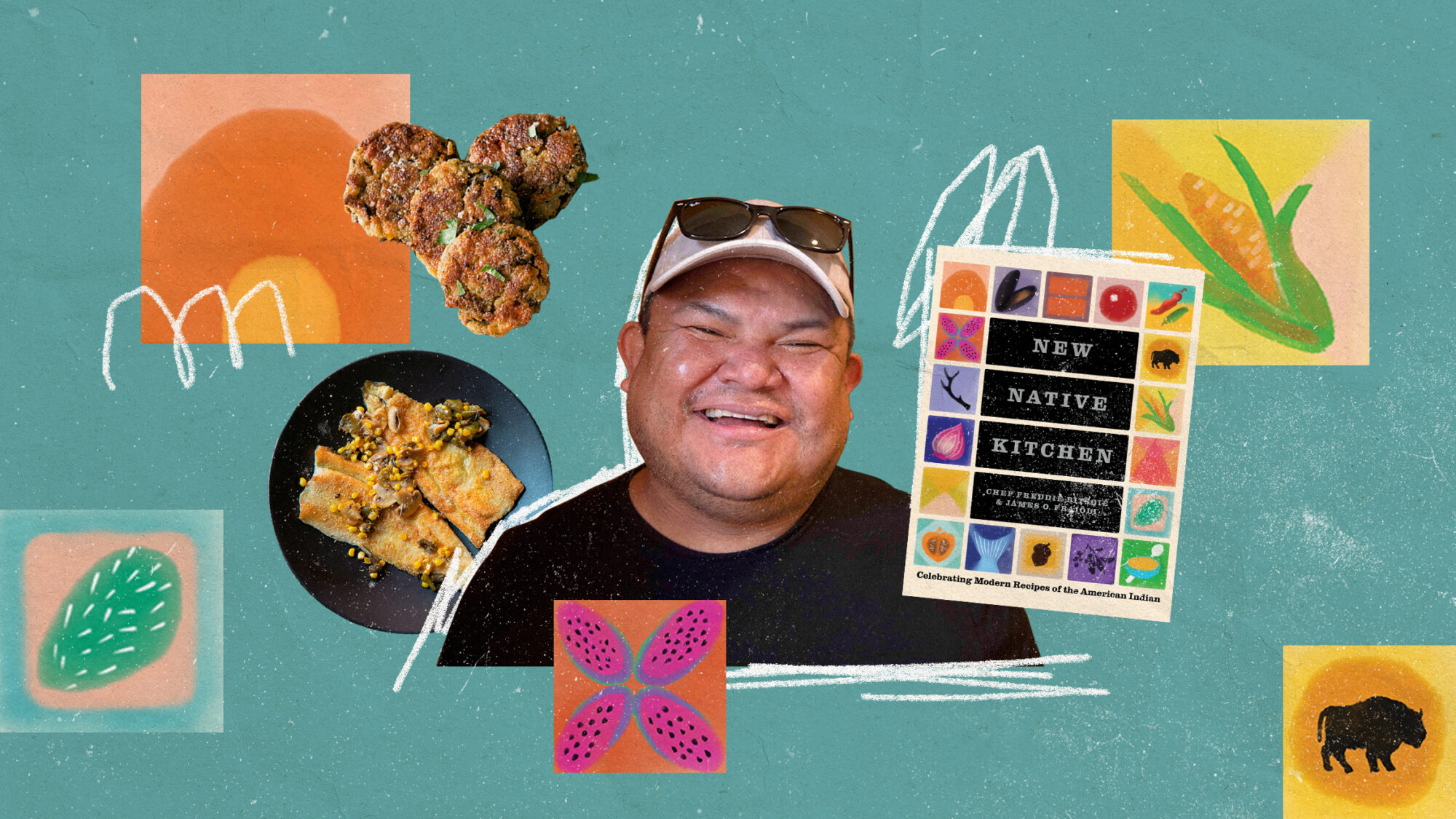 I first got to know Diné (Navajo) chef Freddie Bitsoie through his writing back in 2017 when we’d both contributed essays to America: The Cookbook. His contribution was beautiful, tackling the sound of salt sprinkling on foil and his memories of his grandmother Mary, who cooked on a woodburning stove in Cajon Mesa, Utah. Later, when we were both on a panel about American food, I learned that Bitsoie was a Le Cordon Bleu–trained chef with a degree in anthropology who had spent nearly a decade cooking with Indigenous, Native American, and First Nations culinarians across the continent. (I also learned that he was hilarious.)

The next time I went to Washington, DC, I made sure to eat at Mitsitam Native Foods Cafe, the restaurant he runs inside the Smithsonian National Museum of the American Indian. It was the best museum meal I’d ever had, and when the pandemic closed its doors, I knew the country had lost something special.

For now, Mitsitam remains shuttered. Luckily for us, two years away from its kitchen gave Bitsoie the chance to create something more enduring—the new book New Native Kitchen: Celebrating Modern Recipes of the American Indian. It’s loaded with Bitsoie’s best recipes, like a Navajo leg of lamb topped with sauce made from a yellow onion simmered with juniper, rosemary, and thyme, and a rabbit stew with cornmeal and sweet corn dumplings.

I called Bitsoie up earlier this month—he’s at home with his family in New Mexico—to talk to him about the book, his forward-thinking focus, and the proper contemporary garnish for a blue corn mush.

I wanted to tell you: the salad section is amazing. Those recipes are just really exciting—hominy with bacon, jicama with prickly pear vinaigrette, poached cactus buds with fresh cucumber. Maybe because of what you say in the book, that your through line is techniques, not just ingredients.
Salads really are not part of Native American cuisine—fundamentally. When we all get together, we don’t say, “Oh, where’s the salad?” It’s not an oogabooga-caveman kind of thing, you know, it’s just that mixing greens and then combining them in oil and acid was just was not a part of any type of repertoire of how people ate historically or prehistorically or even recently. So I really did have a field day with this chapter, but it was also one of my most difficult, because basically with every single recipe, I had to believe that someone who is Indigenous or Native American or First Nations—whomever and however they identify themselves as Native American—would open the book and say, “There is a possibility that this could be a Native American dish.”

That it’s not necessarily what you did in the past, but still really feels Native American?
The blue corn mush is a funny story. We did the photos for the book at the Phoenix Indian School museum—they volunteered the kitchen for me to use because no one was using it during COVID. And one of the ladies who worked there worked for Indian Country Today, and she’s Hopi and she’s a friend of mine. I was getting ready to garnish the blue corn, and I was going to use queso fresco. She just coincidentally came out right when I was doing it, and she goes, “Ooh, blue corn.” Hopi people are known for their blue corn—in my opinion, more than the Navajo people. They make this blue corn piki bread—it’s paper-thin bread, and it’s rolled up like a burrito, and it’s a real crowd-pleaser—and they have all these different ways to prepare the blue corn. She was watching me put the queso fresco on top of the blue corn mush, and she looked at me, and she goes, “What are you doing?”

I said, “I’m just adding some garnish.” And then she goes, “Freddie, if you put cheese on that blue corn, I will claim that you’re not Native American.”

I go, “Yeah, it’s true. I understand. But we’re trying to take photos for a book, so it needs some kind of garnish, and I think the blue and white have a great contrast.” And she goes, “No, we just don’t put cheese in blue corn. And then she made a really good point: “Otherwise, you’re basically making a blue corn polenta.” And that’s where she got me.

This book has lots of recipes inspired by recipes you learned from Indigenous cooks all over the continent, but as I read your book, I see that many came from your family, too.
Those stories and those recipes were based on a history of cooking with my grandmother and witnessing it; my mother carrying on some certain dishes that my grandmother made; and her telling me stories from my grandfather, whom I’ve never met—but still this assumption that “Native” is evolving and changing. It’s great that you have other Native chefs who are talking about the past—and this is in no way insulting or trying to be mean or anything—I think sharing that type of flavor and history is important as well.

But to use the example of preserving culture, what if you just break down the whole idea? What do you do when you make preserves? You take the original substance—let’s say strawberries. Strawberries are boring, so then you add sweetener to them—you gotta make it romantic, you gotta sweeten it up a little, you know? Then you bring all this great flavor to it, so that everyone will enjoy and love it now. And then you get this pretty bottle or pretty jar, and you boil that, you sanitize it. And then you pour the preserves in the jar, and then you close it, and you allow that steam to vacuum that lid, and then you wrap it in a pretty bow. Most of the time, that jar still just goes in the pantry.

When you preserve culture, you’re doing the same thing. Culture’s not meant to be preserved. Culture is a living thing—it’s learned behavior. And so I really do think that talking about Native food and how it’s evolving culturally and moving forward is the premise and the thesis of the recipes in the book.

I think that you telling that story is a very Native American way to describe that concept to me, right? That idea of passing on information by storytelling.
It’s really funny you said that because it gets me embarrassed, because I go to Native American events a lot, whether they’re Navajo or Hopi or wherever. And there’s that one old man who thinks he knows everything, and he’s just telling stories. It’s like, “Oh God, there he goes again.” And now, when I tell stories, it’s like, “Oh my God, I’m becoming those people.” 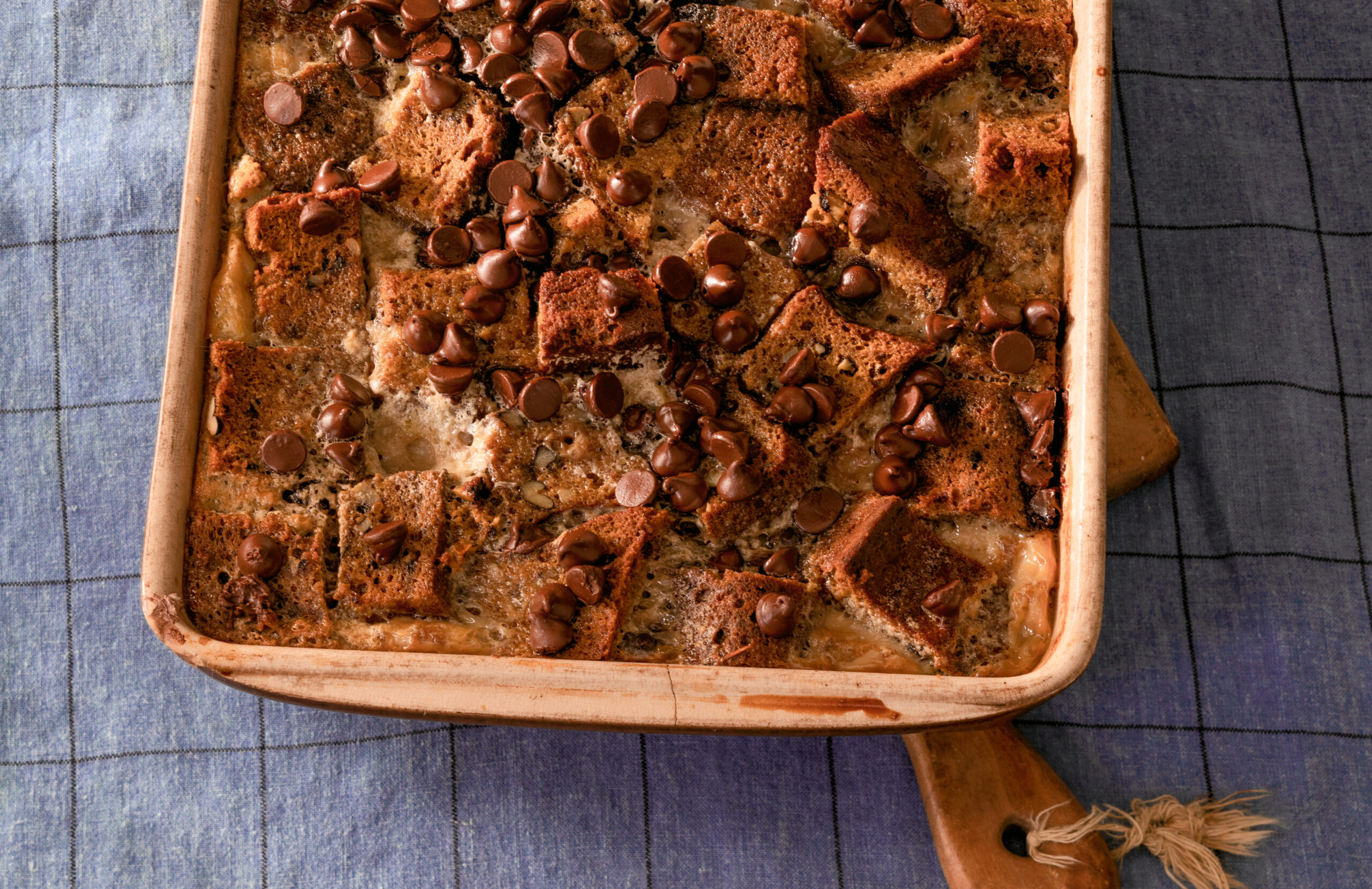 Cornmeal-Crusted Walleye with Roasted Corn and Green Chilies
A light, summery take on a fish found in the waters of Michigan, Wisconsin, Minnesota, and North Dakota.

Manoomin Rice Cakes
These crispy wild rice cakes work as a snack or side dish any time of the day.