Get a free recipe
Subscribe
Things Chefs Do That You Should Not Do
By: JJ Goode Illustration: Sarah Becan 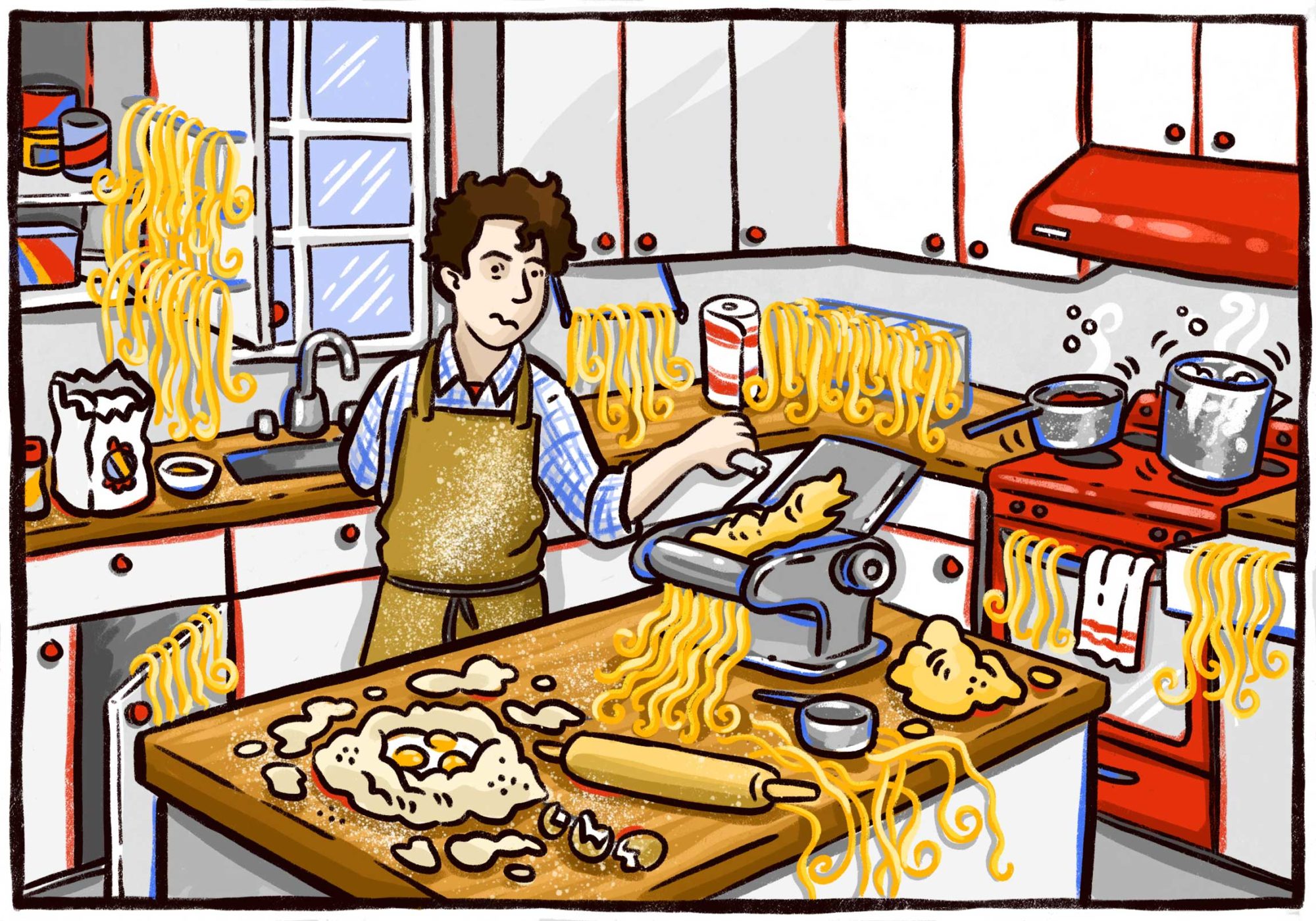 Just say no to lemon zest, “ripping hot” pans, and the ice bath.

Pity the chef who lets me into their kitchen. As the coauthor of cookbooks, I help them transfer their recipes from brain to paper. And while I might initially present as a mere nuisance, reminding them to weigh winter squash or requesting the approximate dimensions of “diced” carrots, I eventually reveal my true intention: to convince them that the dishes they’ve honed over many years, for which they’ve garnered breathless reviews and five-digit Instagram likes, the very dishes that made some stouthearted publisher suggest that perhaps they should write a cookbook, should be stripped for parts. Instead of featuring instructions for meticulously reproducing, say, your signature Wood-Roasted Scottish Grouse With Cloudberry Coulis and Confit Lily Bulbs, I venture, perhaps we can just show people how to roast a decent chicken.

All but the most stubborn chefs relent, yet none entertain my attempts to divest their food of a category of more minor culinary masochisms. Well known to readers of cookbooks and food magazines, this includes a multitude of ingredients, techniques, and measures popularized by professional kitchens, taken up by conscientious home cooks everywhere, and spurned by the same guy tasked with recording them.

Yet dutifully record them I will, in order to maintain employment — and because I recognize that there are many, many cooks who don’t share my sloth, who are perfectly willing to take a paring knife to whole artichokes, even though there are innumerable less-onerous vegetables that deserve to be eaten, or crank out fresh fettuccine, which unless you have serious pasta-making chops is never nearly as good as boiled De Cecco. I, too, aspired to such grandeur until recently, when, for reasons of emotional maturity and poor time-management skills, I reexamined my personal culinary dogmas and decided that I will never again, of my own accord, zest a lemon.

And so, with the verve of a cooking guru devoted to helping level up your dinner, I present to you my advice on leveling down: a litany of personal heresies that bring me shame to report but pleasure to perpetrate. My hope is that these don’ts embolden the apprehensive among you in the same way that the typical pro tips animate the rest.

One of my earliest adopted don’ts was a reaction to the profligate use of lemon zest. Chefs and high-flying home cooks exalt the dosing of pastas and pan sauces, baked goods and bread crumbs, roasted vegetables and tomato toasts with a teaspoon or two of citrus raspings. The purported effect is to add a lemony quality without the acidic punch of the juice, and over the years I’ve transcribed many a panegyric to the practice. The advice is good and true in that surely some science-minded food dude could run an experiment to prove that farro salad made with lemon zest contains 94 percent more limonene than one made without any, but I’ve also done an experiment where I tasted both versions with my mouth and thought they were pretty much the same.

Having already told on myself for having an inferior palate, I will now deliver a broadside against chicken stock recipes. You know the drill: There are the chicken bones, the onions and carrots, the sprigs of thyme and parsley, the 12 peppercorns, and the bay leaf. And there’s the oh-so-gentle simmering and the straining, not to mention the occasional, criminally rude blanching of bones. I suppose some of you might be bothered by a little cloudiness in a stock and can detect the absence of that bay leaf. I’m not, and I can’t. My one-ingredient stock recipe—put rotisserie-chicken carcass in pot, cover with plenty of water, and boil until episode of Succession is over—has enabled countless dinner successes, because it’s twice as tasty and infinitely freer than the boxed stuff, and because its utter thoughtlessness precludes excuses not to make it.

Along with wanton zest and extraneous aromatics, I’ve also sworn off the ice bath, which chefs prescribe like dermatologists do ointment. Basically, you briefly boil something (asparagus, green beans, shrimp), then plunge it into a big bowl of icy water in order to stop the cooking and, in many cases, keep the color bright. It’s a neat tool—if you’re an ice-hoarding, counter-space-having maniac. Its frequent endorsement in magazines and cookbooks reminds this newish father of those manuals on getting your child to sleep through the night that casually recommend locating their bedroom on a different floor—as if most people in New York City have multiple floors, let alone separate bedrooms. A proper ice bath requires two-thirds of the average Brooklyn countertop, and means emptying both of your ice trays, leaving you without even a lone cube for your glass of Grüner, and that’s just madness. Instead, just as my own expert kid-sleeping guidance would include noise-canceling headphones and a large glass of whiskey, my blanching advice is to drain your blanchables, then run them under cold water. Your asparagus will be green and crisp enough.

Put rotisserie-chicken carcass in pot, cover with plenty of water, and boil until episode of Succession is over

And speaking of families, if you have a domestic partner, you will rue the day you followed the ubiquitous counsel that certain items (steak, squid, mushrooms) require a so-called ripping-hot pan. At restaurants, many delights do indeed spring from skillets and griddles set over rocket-booster flames, yet without a commercial HVAC system to suck up and spit out the fumes, home cooks will find themselves frantically waving a kitchen towel at a screaming smoke alarm in order to avoid waking up babies who are not, in fact, on a different floor. Repeat this more than once and you risk serving well-charred lamb chops to a marital counterpart who is considering serving divorce papers. Deep brown crusts are great, but regular old brown crusts are just fine.

I’m fine, too, with the fact that most chefs I work with have a fascination with preservation, that they put out plates garnished with their own pickled okra and lacto-fermented green beans and gooseberry jam. I like eating tart and sweet things as much as the next fellow, and I applaud anyone up for sparing a glut of tasty produce from decay. That said, I must admit that whenever they offer this worthy endeavor as a chipper suggestion, I can’t suppress a snort. I don’t think I have ever in my life been in possession of a glut of anything perishable. For better or for worse, I live in a city where gardens are virtually unattainable, peach picking requires a two-hour schlep to an orchard, and a flat of raspberries costs more than a year’s supply of already artisanally crafted raspberry jam. And on those rare occasions when more than three of the blueberries in my $12 quart last long enough to start shriveling, it’s because I haven’t had time even to stuff them in my mouth, never mind simmer them with sugar and pectin.

Every home cook, of course, has different reasons to grumble. Maybe you love making jam, cost and effort be damned. Maybe you’re one of those cooks who savor a whisper of citrus zest in a stew, who serve guests chicken soup and they all smack their lips and wonder aloud about the source of that elusive piney aroma in the broth, and you say, allowing a slight, proud smile, “Oh, that? I used two bay leaves.” And if you’re not, know that you have company.