Get a free recipe
Subscribe
There’s Only One Day to Eat Chili: The Next Day
By: Jenn de la Vega Illustrations: Lauren Cierzan 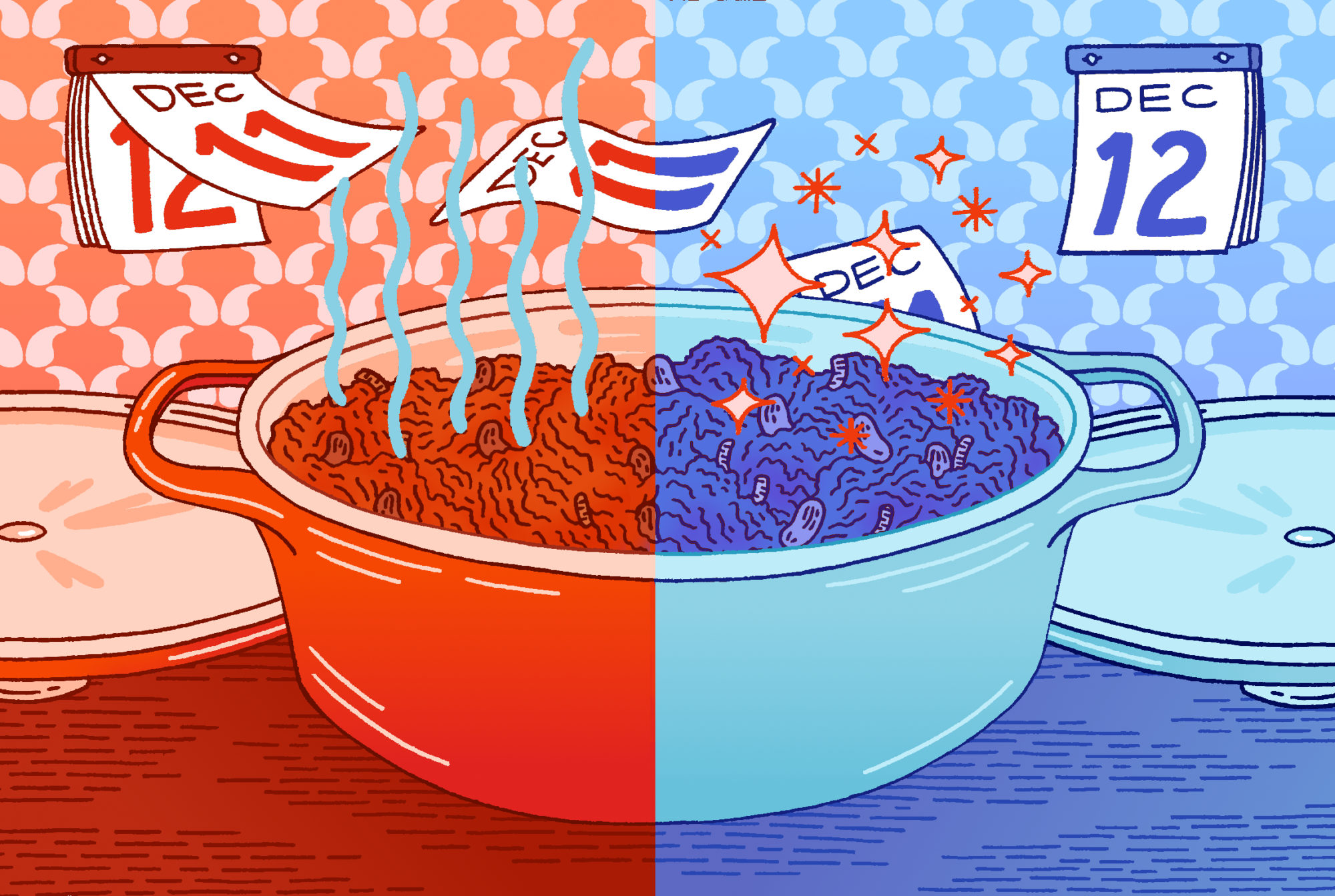 And here’s how you can add a little extra spark on day two or three.

For as long as we’ve been cooking chili, we’ve been making it ahead of time. In the 18th century—in what is now San Antonio, Texas—women known as “chili queens” sold the spicy meat stew in public plazas to hungry Spanish soldiers. In the 1840s, traveling cowboys packed dried bricks made from beef pounded with chile peppers, spices, and fat for their long journeys. They could be easily rehydrated and reheated along the way.

But even for home cooks today who aren’t hungry soldiers or roving cowboys, day-old chili has a big advantage over a batch pulled directly from the stove: It just tastes better. As a contender and judge of a series of Brooklyn cooking competitions called the Takedowns over the last decade, I’ve seen dozens of chilis, soups, stews, and meaty pasta sauces mature and blossom into beautiful foods after a rest in the fridge overnight. The little bit of extra time allows flavor to soak into the meat, while the mixture develops a thicker, more sumptuous texture.

There’s some quick science going on here: Aromatics like onions, garlic, chiles, and spices release their volatile oils as they cook, and while they cool they continue to release. Meats release collagen as they cook, but when they cool down, they gelatinize and trap more of those aromatics. The two big caveats here are that over time, the chili tends to lose some of its moisture, and spices like cumin lose potency and become rounded and more mellow.

For a home cook, the way to be a good leftover great might be as simple as a dash of hot sauce. But in the chili cook-off universe, these hacks run the gamut, from “dumps” of spices at various stages of cooking to extra MSG with powdered bouillon to liquid floats of bourbon or punchy broth. I’ve found that folding in chopped cilantro stems during the reheating process adds freshness and a bit of crunch. “When I was making chili in college, I wanted it to last a week. The last bowl was always better than the first,” remembers Matt Timms, the creator of the Takedowns cook-off. At the helm of the Takedowns, he’s heard of plenty of entrants starting their batches the night before the competition. He remembers seeing one revived the next day with a last-minute addition of habanero watermelon juice.

Another veteran of the Takedowns is Mike O’Neil. In the past, when he made chili for a lot of people, he made it ahead of time and chilled it. But when it was time to serve, he found the fat had often congealed. “It was kinda disgusting to scoop,” he says. His solution was to reheat it with a bottle of Ommegang Rare Vos. Adding beer loosened up the clumpy texture and, as it reduced, imparted a touch of malty acidity.

I’ve even heard of some chili fans leaving cauldrons of chili out overnight to “ferment” (a bit of a misnomer for the flavor-melding—not fermentation—that’s actually taking place). But to prevent an outbreak of clostridium perfringens (a nasty bout of food poisoning), you should make sure your chili mellows at a temperature either below 40°F degrees (that is, refrigerated) or above 140°F degrees. Tex-Mex-pert and author of The Chili Cookbook Robb Walsh points out one exception to leaving your chili out in the open. “It works great when camping in cold weather,” he says.

Tony Santoro, a former lighting director for Sesame Street and a longtime competitor in the Takedowns, says he keeps the chili at a safe temperature by using a 500-BTU burner on low heat, which simulates a slow cooker. At minimum, he does this for one night but will push it to two or three if he has the time. This allows the aromatics time to steep and the proteins time to break down, leaving meats ultra-tender.