Get a free recipe
Subscribe
There Are No Sad Salads in Uyen Luu’s Kitchen
By: Tatiana Bautista Photos: Nick Hensley 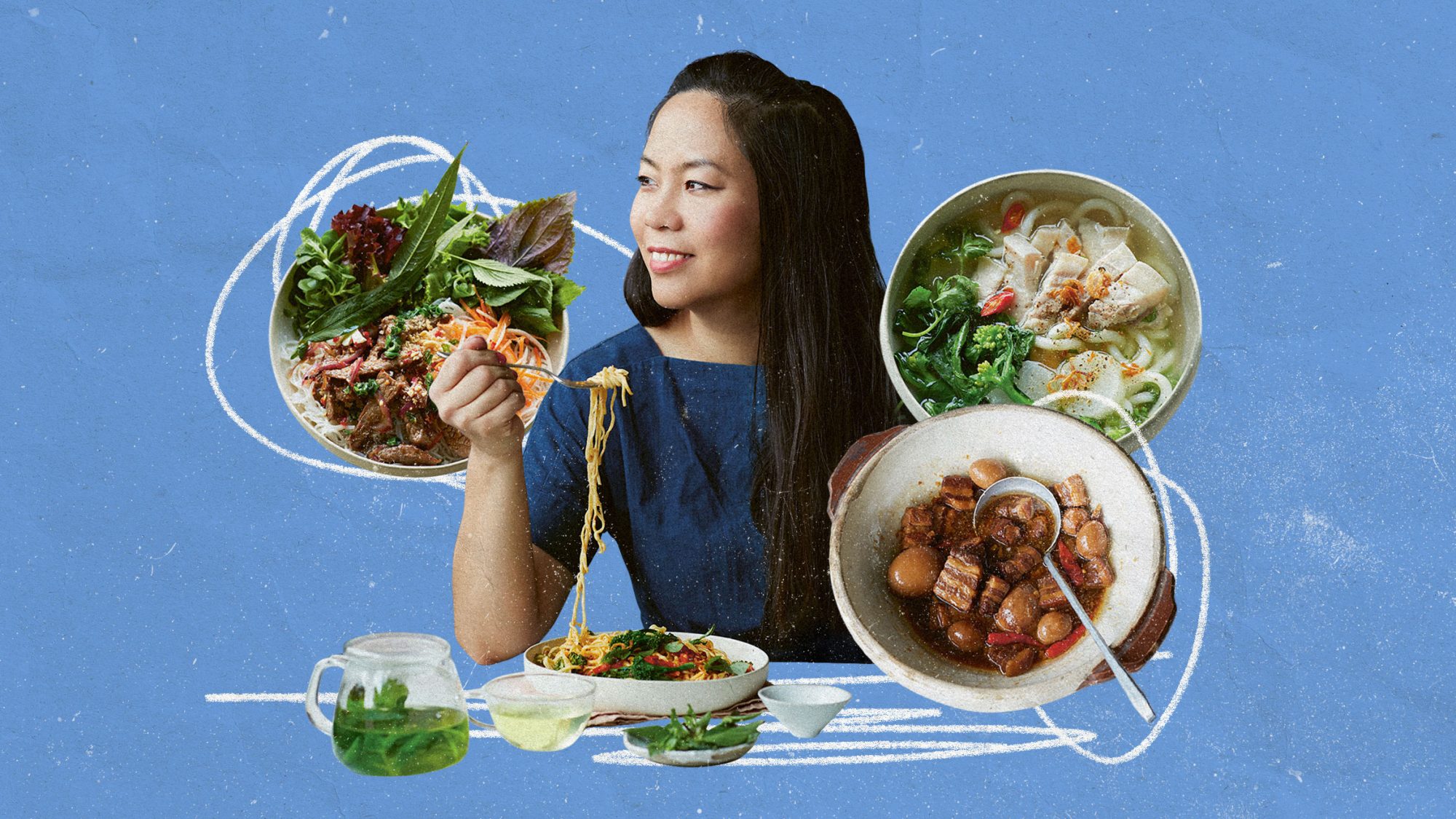 For the London-based cookbook author, Vietnamese cooking is a careful balance of bold flavors, fresh herbs and no shortage of exciting ways to eat vegetables.

Uyen Luu is used to cooking for a crowd. On a near-weekly basis for the past decade, she’s been feeding upwards of thirty to forty supper club guests in her East London studio and kitchen. What started as her homage to Italian osterias evolved into her supper club’s current form: large family-style dishes of lemongrass-scented ribeye, woven rice noodle sheets of bánh hỏi, and pandan cheesecake, all reflecting her Vietnamese roots.

London’s past year of lockdowns put a pause on her dinner parties (which are tentatively set to resume in July), but in her downtime, she wrote her latest cookbook, Vietnamese. Her recipes embody the spirit and conviviality of Vietnamese cooking—which, she emphasizes, is not always about finding exactly what you’d get in Vietnam, but focusing on local seasonality and, as she writes in the introduction, “simply follow[ing] the rule of balancing sweet, sour, salty, umami, bitter and hot.”

She opens her chapter on salads—filled with caramelized slabs of pork belly and crispy, sizzling crepes—with a clear disclaimer, writing, “When I talk about salads, you can be sure there’s no iceberg lettuce in sight. I mean no setbacks or sacrifices, and I definitely don’t mean the salads you’re supposed to eat if you go on a diet.” We recently caught up on Zoom to discuss her trick of adding Marmite to simmering broths, the Vietnamese concept of ăn chơi, and the constant evolution of Vietnamese cuisine.

You’ve been hosting supper clubs for a while—how did you get your start cooking and writing?
As a child I’ve always wanted to be a writer, but also a photographer. I’ve always wanted to have a cookbook from, you know, forever. But I’ve trained as a filmmaker and photographer. So I was doing this and that, and I discovered that food was a gateway to many relationships and friendship and happiness. So, I hosted a lot of dinner and made friends that way. I love feeding people and just being together, you know, from chatting on the surface or chatting deeply, to singing songs and having a dance after a meal. And that’s how I started the supper club—because I was just cooking all the time for my friends. And then I started to feel a little bit out of pocket after a few years, like, “Hey, you need to help me pay for some of these ingredients.” You know, people were turning up and telling me they were just down the road to ask if they could come over for lunch. It started to be like a little cafe. I asked people to donate, you know, just a little bit if they’re going to come every week for a meal, and I was traveling around a lot as well in my twenties. On my trips to Italy, I loved all of these little osterias right in the mountains in someone’s house. And you wouldn’t really know them unless, like, a local tells you to go their house, where they have a restaurant at the bottom and you pay something like 30 or 40 euros and you get whatever the kitchen is cooking.

And they would just bring out five hours’ worth of food—the pasta and the fish and wine. So I thought to myself, London really needs to have something like this. So that’s how I started. I did the supper club for about 10 years and the pandemic stopped that; I had to cancel everything and after the first lockdown, I started doing takeout meals.

It started off cooking Italian food because of my travels. But then I started to insert a dish Vietnamese here and there. And then everyone started saying, we’ll come if you cook Vietnamese! And then the Italian stuff never happens again. [Laughs]

Were you always holding the supper parties out of your own home? Or did you always have a separate space?
I did for about six years in my own flat. But then when I had my daughter in 2015, I moved to a studio space because I’m a photographer and I did it there since then.

And in addition to converting your supper club into a takeout business during lockdown, you managed to write an entire cookbook!
Vietnamese is so different from my first cookbook, and this is the book that I feel like is really me. I love all the illustrations, shooting it and writing all of it. It was really hard! Coming up with the recipes was quite easy, but getting it tested by hundreds of people all around the world because of the pandemic and getting notes back and editing, it was really a hard journey. Because, say you’ve cooked something maybe six months ago, but then when you write it all down, you have to sort of try to imagine yourself in the kitchen doing it. That was really a chore, but I was so pleased that we got there in the end. And, I can’t believe I did it all in a year.

I just love the idea that there are certain foods that you eat for fun, as you reference in the book, called “ăn chơi.” It’s a phrase that doesn’t really exist in English. What kinds of dishes encapsulate ăn chơi for you?Yeah, it’s such a shame when we think of the connotation of snacking; it’s not always the same kind of feel of eating and joy—like eating for fun is so about pleasing yourself and gifting yourself and being good to yourself. For me, I think of the fresh summer rolls, fried spring rolls. It’s also gifting to others and, and it’s a social interaction with others as well. You eat when you’re a bit bored, you eat to entertain yourself. So it’s entertainment, isn’t it? It’s also things like the langoustines poached in coconut water: That’s totally a thing you have with a friend and while you’re having a chat and you both pick at it and you just go on and on. In Vietnam, they have noodle soups, like the pork udon noodle soup, at night, like after your main meal when you’re not going to bed since you still want to hang out with your friends or your family. That is eating for pleasure.

I noticed in the book that alongside traditional recipes, there are also more unconventional additions, like kale with shallots, ginger and orzo and oven-roasted chicken, and you talk about how Vietnamese food doesn’t exactly mean you’re using the same exact ingredients you’ll find there, you’re just making do with what ingredients you have.
Just from growing up in the U.K. and seeing what kind of ingredients and local produce we have, and just using what we have and what’s available and making it Vietnamese through seasonings and sauces is what any Vietnamese people would do in general, anyway. And the food has to evolve as well. There’s loads of traditional recipes, which are in the book. And like you say, I’ve added some modern twists to things. Even in Vietnam, there is so much of this modernity in the cuisine that I don’t even know about because the food is always evolving, but still stays true to the Vietnamese way of, of eating, and the flavors and the taste. So many people enjoy Vietnamese food and they feel so pressured that they can’t get the right thing, but what is the right thing?

Because if it’s a caramelized fish, it doesn’t have to be a hake, it could be sardines, you know; in Vietnam, they’d just do the same thing to any fish. And then herbs are so special in Vietnamese food, but why should that stop you from having Vietnamese food, if you don’t have, like, five varieties, [use] even just half the variety that you have and still have a great meal.

I noticed you call for Marmite—an English pantry staple—in soup broths, which could substitute for MSG.
It has such a big umami flavor. So even if I’m missing loads of things in my pantry, but I’m still able to create something that has familiar flavors to me.

And you have a whole chapter dedicated to “proper salads, Vietnamese style.” What does that mean to you?
Yeah, until I wrote a book, I didn’t put two and two together about the salads—that they’re more than the association with bland leafy greens. It occurred to me that actually there’s so many salads in Vietnamese food, like the fresh rice paper rolls translates as a rolled salad in Vietnamese. They’re such interesting salads, with texture and the different proteins you can have, even just with the way things are cut, like julienned. How things are sliced makes such a difference to your palate and texture, and it brings so much pleasure. Thịt Kho Tàu: Braised Pork Belly & Eggs in Coconut Water
This dish is usually cooked with leftovers in mind, especially as the flavor improves after a few days.

Last week, we caught up with Heidi Swanson to discuss her cookbook, Super Natural Simple, and all of the bean salads and new-school granola that go along with it.

If you’re gearing up for baking your farmers market haul of summer fruit, our interview with Yossy Arefi last summer will give you plenty of inspiration.

Journey to Friuli Venezia Giulia, the land of prosciutto and frico.

Melissa Clark shows us the way to rustic French simplicity in Dinner in French.

In Colombiana, recipe developer and food stylist Mariana Velásquez embraces a more-is-more approach to Colombian-style feasting, where every meal is celebratory.