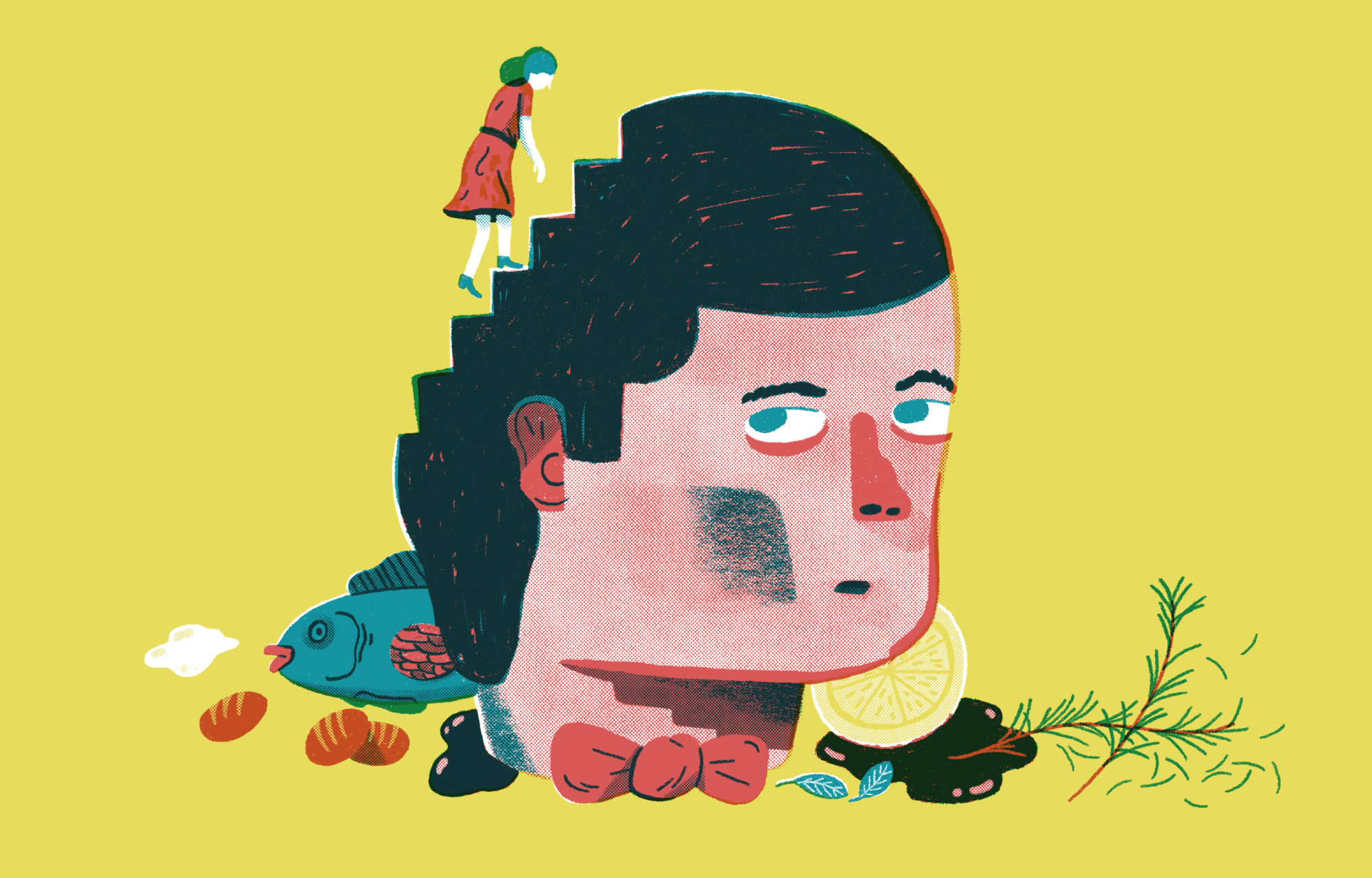 In a work of fiction, a curious wedding guest climbs a stairway of discovery.

At the tail end of the wedding, as the last guests were fighting over whose coat was whose, the maître d’ took me aside. He’d had his eye on me all night; even when he’d handed me my third rosemary-cucumber martini in that dismissive way of his, still he’d had his eye on me.

I wondered, with some amazement, how he’d singled me out, my particular cocktail-length dress, my particular shoes; I was identical to every other drunk young lady at the wedding, in no way deserving of additional admiration or scorn, distinguished only by the fact that I happened to be the sole witness when the cancerous woman ran into the Ladies’ Room with a nosebleed (“Can I get you seltzer perhaps?” I said, because the blood was falling on her green silk jacket and I’ve heard seltzer can do some good against blood. “It’s my pancreas is all,” she replied; I couldn’t think of anything to say to that).

“I have to show you something,” the maître d’ said. They were the first words I’d heard from him, and while I wasn’t surprised that his tone was scornful, I was surprised that he would make such a forthcoming statement.

We were standing at the bottom of a staircase, one of those staircases with red carpeting running down the middle; it was up this staircase that he gestured. He was skinny, this maître d’ of mine, almost skeletal, with a shorn head. His eyes were black and filled with rage or something else that made them burn.

In the dimness beyond the dance floor, my husband was leaned up against the wall, passed out there with a portrait of a woman from 1632 around his neck. I don’t know how it had gotten there, that painting, but at the beginning of the evening it had been hanging grandly on the wall and now here it was with my husband’s drunken head stuck through it, violating the lady’s charcoal dress. I didn’t know how much it would cost, or if our lives were essentially over.

“Of course,” I said to the maître d’, stepping onto the first stair.

Behind us, the bride and groom held each other weeping–hopefully for joy–in the starlight.

Just kidding. There was no starlight. In fact, the fluorescents had just come on; the staff was dying for us to clear out. But they were holding each other, the bride and the groom, and they were most definitely weeping. With this ring, you are holy to me.

The maître d’ joined me on the step. I looked over at him, turning on the faucet of my smile, eager to dazzle him, to grab his hand and run upward. But yet again I’d misread the situation; he returned my gushing smile with that withering gaze of his, and my hand dangled un-held between us.

At a pace exactly halfway between slow and fast, the maître d’ mounted the stairs, and I followed. There was a sharp right, then a second staircase. Hours we’d been here, in this old stone venue, hours of revelry, and I’d never had any idea about these staircases. What had happened to them, all my powers of observation? Already it was fading behind me, the wedding vanishing into the past, the things I shouldn’t have said at all, much less in the middle of the dance floor: That my husband had desires I wasn’t capable of satisfying, that my grief about the fetus had yet to drain away, that I wanted things to be different than the way they were.

I shivered with shame for that girl, that girl who had said those things, who had sat alone at an abandoned table trying to devour the dessert placed at her seat as well as the one at her husband’s while the waiters looked on with distaste, but walking up these red-carpeted stairs alongside my maître d’, I no longer felt responsible for the words I’d shed like dead hair upon the dance floor.

On the third staircase, the food began. At first, just a nibbled dinner roll in the corner of one stair. A whoosh of specks that might have been stains, or poppy seeds. A patch of something wet on the carpet—wine, or water, or an illusion.

But by the fourth staircase there was no question: the steps were littered with food. An unmistakable smear of that green pistachio mousse. A sprig of butter-encrusted sage. Gnocchi scattered moistly down the side.

With each step it got worse. The decimated body of a trout. A half-eaten fist of beef Wellington. A quail pulled to pieces. A slick of port sauce. The breathtaking garnishes—the rosemary, the begonias, the curls of candied lemon peel. The aftermath of the luxury, all just garbage now. Worse than garbage.

Then, on the sixth staircase, I got this odd feeling in my heart: there, unmistakable, were the remainders of the two desserts I’d failed to finish, the lavender crème brûlée still in its little cup, the hazelnut tart whose integrity I had violated.

Too ashamed to look at the maître d’, I ducked my head and cried quietly as we passed the wasted desserts.

How fragrant these foods had been when they were bestowed upon the cream-colored tablecloths–the smell of butter, warmth, safety, joy. Yet now dark and disconcerting odors arose from the rejected food, the rot already encroaching. I had never before understood that the end of a feast is a funeral.

I didn’t want to step on any of it—it seemed like stepping on corpses—but sometimes it was impossible to avoid, the food thicker on each stair. I shuddered as my shoe crushed an errant slice of blood orange, a handful of capers.

“You’re right to feel pity,” the maître d’ said coldly on the ninth or maybe the tenth or maybe the nineteenth staircase, “but you’re not supposed to direct that pity toward yourself.”

It was impossible that this old stone house contained all these staircases. We’d long ago shed the loveliness of the rooms below—the candlelight, the delicate white poppies, the old Dutch paintings. Here the red carpet looked cheap and stank. Bare bulbs, unfinished walls. We arrived at a paint-splattered plywood door.

The key that the maître d’ removed from his inner pocket looked like a key from a fairytale. Think Bluebeard; seven dead brides. Why did it take me so many staircases to realize the kind of danger I was in?

I whirled around to dash downward, but the maître d’ somehow had his arm about my waist—what a long arm he had, a miraculous arm. I whirled back around to face him, hoping against hope that what he’d brought me here for was a kiss, but it only took one look at his mouth to know this was a cage, not an embrace. With his other hand he twisted the key.

That was all. An enormous laundry room.

Strolling among the machines, in various states of undress (a shirt unbuttoned, a vest slung over a shoulder): waiters whose hairstyles I recognized from the banquet. Their faces, which had been blank blurs to me before, now seemed exceptionally vivid: an exhausted forehead, a wan smile, a cynical eyebrow.

I wanted to ask him which costumes he meant, or if he’d misspoken, if he’d intended to say “the uniforms” or “the linens.” But he was not the type to stand corrected.

Amid the aroma of laundry detergent, I caught a whiff of something less pleasant. I glanced down at myself, only to discover the gray fabric of my dress covered in old food, chunks of the feast plastered to the soles of my faux vintage high heels, a layer of inexplicable stickiness on my skin; the odor emanated from me. I reached up to touch my hair—sure enough, smears of butter met my fingertips.

I hadn’t worn a gray dress to the wedding! Yet I found myself unable to recall the original color of my dress—hadn’t it been pink, or at least lavender? As I examined the dress, it struck me darkly that I recognized many of the stains now adorning it, recognized them by their shape and location; the red wine my husband spilled on my bodice at our own wedding, the sweat marks from the interview for the job I didn’t get, semen and saliva, a teaspoon or two of amniotic fluid, the olive oil from the first dinner I’d ever cooked by myself, the requisite menstrual blotch, the mud from the hill behind my grandmother’s house, the grass stains from where I’d sat on the lawn as a baby. And brownish droplets on my sleeve, which I could only attribute to the cancerous woman with the bloody nose.

“Excuse me,” I said to the maître d’, hesitant yet also desperate, desperate. “Can we wash my—costume?”

The word “costume” felt awkward in my mouth—“dress” was the word I’d have preferred.

I pictured myself unzipping my dress, unhooking my bra, stepping out of my shoes and underwear, standing there in the laundry room among the wait-staff, heavy-limbed and calm, like a child who’s never heard of sex. Maybe they would gather around me, poke at me or mock me or tickle me, or maybe the vast indifference they currently exhibited would continue. It didn’t matter, though; nothing mattered as long as my costume got washed.

This story appears as part of the Fall 2017 Fiction Issue

Helen Phillips is the author of four books, including, most recently, the short story collection Some Possible Solutions, winner of the 2017 John Gardner Fiction Book Award. Her novel The Beautiful Bureaucrat, a New York Times Notable Book of 2015, was a finalist for the New York Public Library’s Young Lions Award and the Los Angeles Times Book Prize. She is the recipient of a Rona Jaffe Foundation Writer’s Award and the Italo Calvino Prize, among others. Her work has appeared in The Atlantic, The New York Times, and Tin House, and on Selected Shorts.