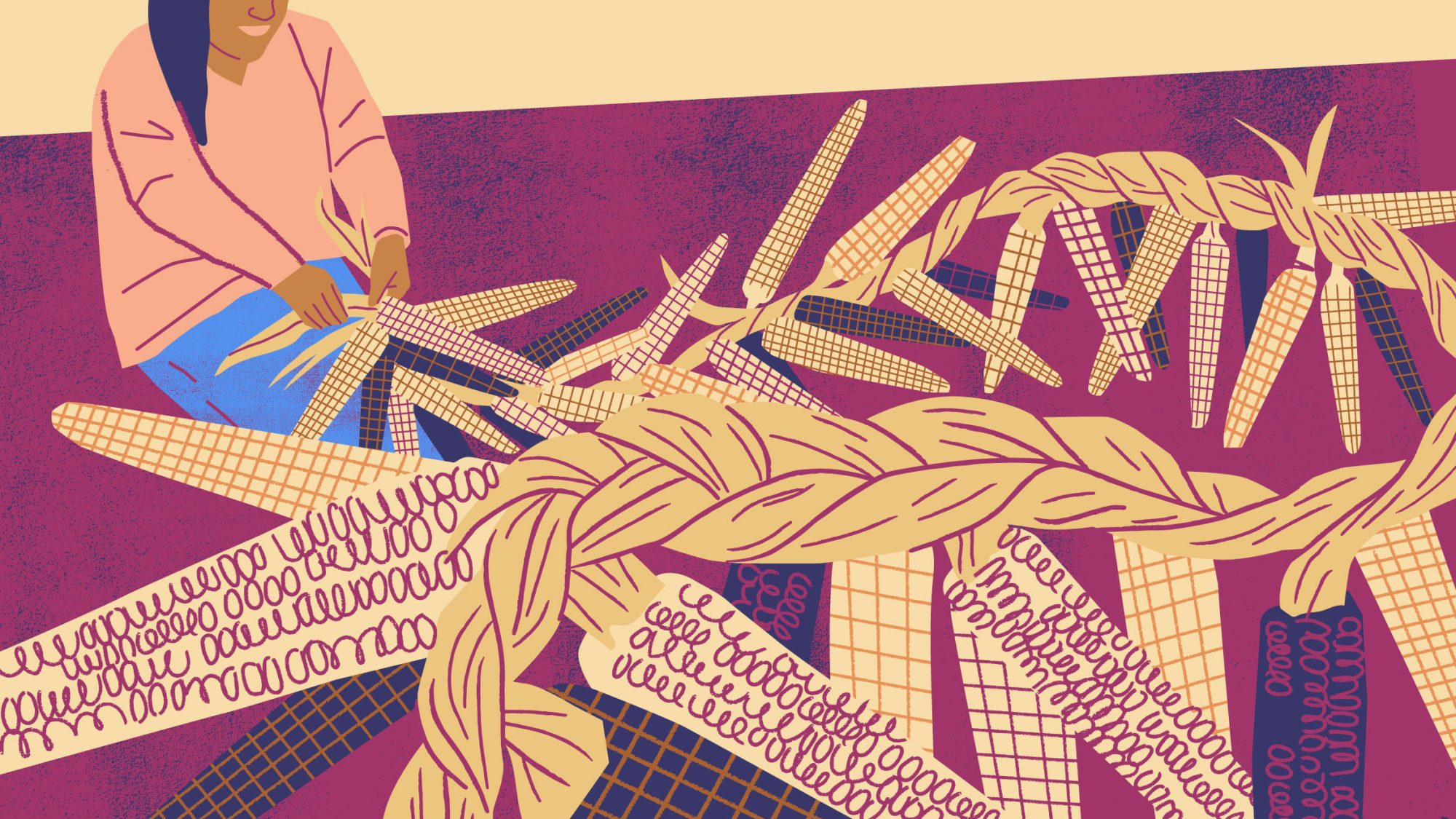 Competing with Big Corn is no simple task for small Indigenous operations. But profitability is only half the battle.

Corn may be one of the first agricultural staples associated with Indigenous agriculture in North America, and as an ingredient, it’s as ubiquitous in non-Native food cultures as Doritos and Coca-Cola. But long before packaged chips took up an aisle at the grocery store, before colonial settlers arrived on the shores of the New World, hundreds of unique corn varieties once existed—and even flourished. The sad reality is simple: Several of these varieties, and the traditional techniques used to dry kernels and grind them into products like corn flour and cornmeal, have only barely made it back from the brink of extinction.

Yet there is still hope. Some Indigenous communities are branching out amid a renewed resurgence in Indian Country to open new foodways to sell tribally owned corn products to the greater public. In Towaoc, Colorado, the Ute Mountain Ute Tribe mills a lush cobalt-hued cornmeal. Ramona Farms, located at the Gila River Indian Reservation in Sacaton, Arizona, turns their heirloom Pima 60-day corn into a silky, nutrient-dense pinole with a roasted mesquite flavor. And in Victor, New York, the Iroquois White Corn Project (IWCP) is reviving traditional growing and processing methods to resurrect crunchy hulled corn for soups and corn flours for baking breads, cookies, and other pastries. As their clever slogan suggests, “It’s aMAIZEing.”

Reviving organic, heirloom, small-batch products like these might seem quaint in today’s sometimes-precious food landscape, but for the Iroquois White Corn Project, it’s a way to revitalize a culture that’s been stripped away by centuries of genocide. In 1687, French forces invaded the Seneca Nation’s Fort Hill, a gigantic palisaded granary in upstate New York, once filled with stored corn; an estimated 1,000 acres of their land and 1.2 million bushels of corn were destroyed.

“They went to the fields with swords and cut down all the growing corn and burned it,” says G. Peter Jemison, a member of the Seneca Nation and historic site manager at Ganondagan, formerly the largest Seneca town on ancestral lands east of the Grand River and now a New York state historic site. “They spent several days moving from one town to the next, burning the town and setting fire to whatever corn they could locate.”

Facing starvation, the Keeper of the Western Door (Seneca Nation) were forced to flee their homelands, heading eastbound to resettle encampments along Seneca Lake as refugees, only to have their supplies destroyed again in 1779. This time, forces were led by George Washington, one of America’s founding fathers, who was also called by another name: Conotocarious, the “Town Destroyer.” He was responsible for ordering the Sullivan-Clinton Campaign to burn another 160,000 bushels of corn, bringing the total loss from these attacks to more than 76 million pounds. The famished Senecas fled yet again after further displacement where many perished, eventually moving westward toward Buffalo where the Cattaraugus and Allegany reservations reside.

Nearly 250 years after Washington’s attacks, Angel Jimerson was the first Seneca child to grow up at Ganondagan in modern-day Victor, New York. The 23-year-old Seneca of the Heron Clan has been safeguarding his ancestors’ practices ever since he was a teenager, and he now serves as the production manager of the Iroquois White Corn Project, which was founded around 1998. The project aims to restore the farming, consumption, and distribution of traditional Iroquois white corn to Haudenosaunee communities first while offering those same products to non-Indigenous ones as well.

Jimerson is in charge of processing, shucking, washing, husking and drying the corn, which comes from Indigenous farms like the Seneca Nation’s Gakwi:yo:h Farms just outside of Buffalo, New York.

His aunt, Jeanette Miller Jemison, is the wife of G. Peter Jemison as well as the program director of the Friends of Ganondagan. She says that they’ve received hundreds of pounds of corn each season from Gakwi:yo:h alone, processing traditional corn into food products for their community first, then selling the rest commercially.

Seeing a swell of consumer interest in high-end organic goods, IWCP board members thought that their line of specialty corn products would be a natural fit in plenty of grocery stores and food co-ops, but making a profit hasn’t been so simple.

“The corn isn’t really making us a lot of money,” Jimerson admits. (Dean & Deluca, a premium grocer, once contacted them with serious interest, but the now-bankrupt specialty food store only sought to sell their products at a steep markup.) “We can even charge more for our corn, but we don’t because we see this more as being able to teach people rather than making money.”

And for a lot of consumers, the $2 or $3 bag of mass-produced commercial cornmeal will always prevail at the end of the day.

One of these popular brands that’s been on grocery store shelves since the 1950s is Indian Head, made by Wilkins Rogers Mills, formerly Maryland’s largest flour mill company, founded 267 years after the initial genocide at Ganondagan.

The unnamed red-faced Native American with a feathered headdress on the bags, who might once have been seen as a frightening villain in a spaghetti Western film, became a benevolent friend, and the ambassador of a popular cornmeal brand—one trusted, as the company boasts, “by generations of families.”

But not among the Iroquois White Corn Project. Jimerson—who was born and raised on a reservation—found their brand damaging for Indigenous peoples and youth like himself.

“It’s definitely something that is upsetting to see and know that it’s there being appropriated like that,” Jimerson said. “The headdress is not meant to be an advertisement to make money.”

Seven or eight years ago, Wegmans, a Rochester, N.Y.–based regional supermarket, initially bought bags of IWCP corn that were sold for $9 per pound (or $5 per eight-ounce package), but it was difficult to convince consumers to pay such a price with $2 and $3 bags of Indian Head and other industrial cornmeal sitting on the same shelf. The Iroquois White Corn Project set up a booth at one Wegmans store, trying to educate consumers about their Indigenous-owned brand. “Most people didn’t want to hear, they didn’t care,” says Jemison.

That’s when Jemison realized that the IWCP “didn’t belong there.” They morphed their vending approach into an “as needed, as ordered” business model—selling primarily to natural food markets, Indigenous and farm-to-table chefs, Haudenosaunee communities, colleges and universities—and even at the gift shop at the Ganondagan State Historic Site.

Devon A. Mihesuah, the Cora Lee Beers Price Teaching Professor in International Cultural Understanding at the University of Kansas and an enrolled citizen of the Choctaw Nation of Oklahoma, believes these images have been “for the taking” by manufacturers who realize that “Natives don’t have the power to fight.”

As Mihesuah points out, Native peoples like the Seneca “were conquered” hundreds of years ago when their lands and resources were seized by colonists—physical acts of genocide that can still be felt psychologically today through food brands appropriating depictions of Indigenous identities.

For a food corporation that has profited for decades from Indigenous imagery, the idea of paying reparations might seem like a natural way to make amends. But as Mihesuah candidly asks: “They’re using Indian Head, but which Indian, which tribes, of what time period? Who are they going to pay?”

There are still plenty of obstacles that tribally owned food operations must face—just to bring their products to the retail market. One of them is the seasonality of their traditional production methods, which aren’t meant to compete with year-round factory production goods.

Even for Indigenous food makers who have survived generations of genocide and cultural appropriation of their peoples that’s still perpetuated today, there are still plenty of obstacles that tribally owned food operations must face—just to bring their products to the retail market. One of them is the seasonality of their traditional production methods, which aren’t meant to compete with year-round factory production goods.

The first or second Saturday in October is dedicated to “Husking Bee days,” a tradition where 25 to 35 volunteers descend upon Ganondagan, arriving at a barn where the corn husks are separated into three parts and then braided by hand, binding the ears together tightly enough to be hung, suspending over 50 pounds of corn in the air.

Once the ears of corn are dried, they undergo processing to become flour. The kernels’ hard hull needs to be peeled off before ingestion—and there are a few ways to do it. Hardwood ashes help to soften the hull. Then the hull gets scrubbed off in wash baskets with the modern-day gift of commercial lime. Another option is to boil the corn in a pot of water for about a half-hour to an hour, depending on the particular type of corn being used.

“They all have their own different traits,” Jimerson explained. “When we get a new lot, we have to kind of experiment with it and see what that lot of corn needs.”

Next, the ears are hand-rinsed and their pH is tested. This is followed by shucking, sorting, and sifting. Once the ears are shucked and cobs are sorted, all of the corn dust and silk is sifted out. Each batch of kernels is then placed on a tray inside a dehydrator oven—160 degrees Fahrenheit for 15 to 20 hours. The IWCP is only able to process 36 to 48 pounds of corn on any given day, limited by the size of their 500-square-foot traditional processing facility.

Although the facility and operation might seem small, their output is impressive—almost 2,000 pounds of processed corn every year. While the whole process is a physically challenging one that is shared among a collective, emotional well-being is built into the entire process.

“It’s surprisingly not as easy as people think,” Jimerson added. “It’s very important about the energy that you’re putting into this food that other people will be eating.”

As long as the people producing the corn are able to remain in good mind and spirit while doing the work, earning revenue from their corn products is just a remote thought to Jeanette Miller Jemison.

“We just decided that it’s not worth it for us to be working, really busting our backs, for somebody else,” she said. “If we’re going to do this, we’re going to relax, do it in good mind and deal with it ourselves.”

How to buy traditional corn:

Gabriel Pietrorazio is a journalist who focuses on food and agriculture. His reporting has appeared in Civil Eats, FingerLakes1.com and the Washington City Paper. You can find him at @GabePietrorazio on Twitter.