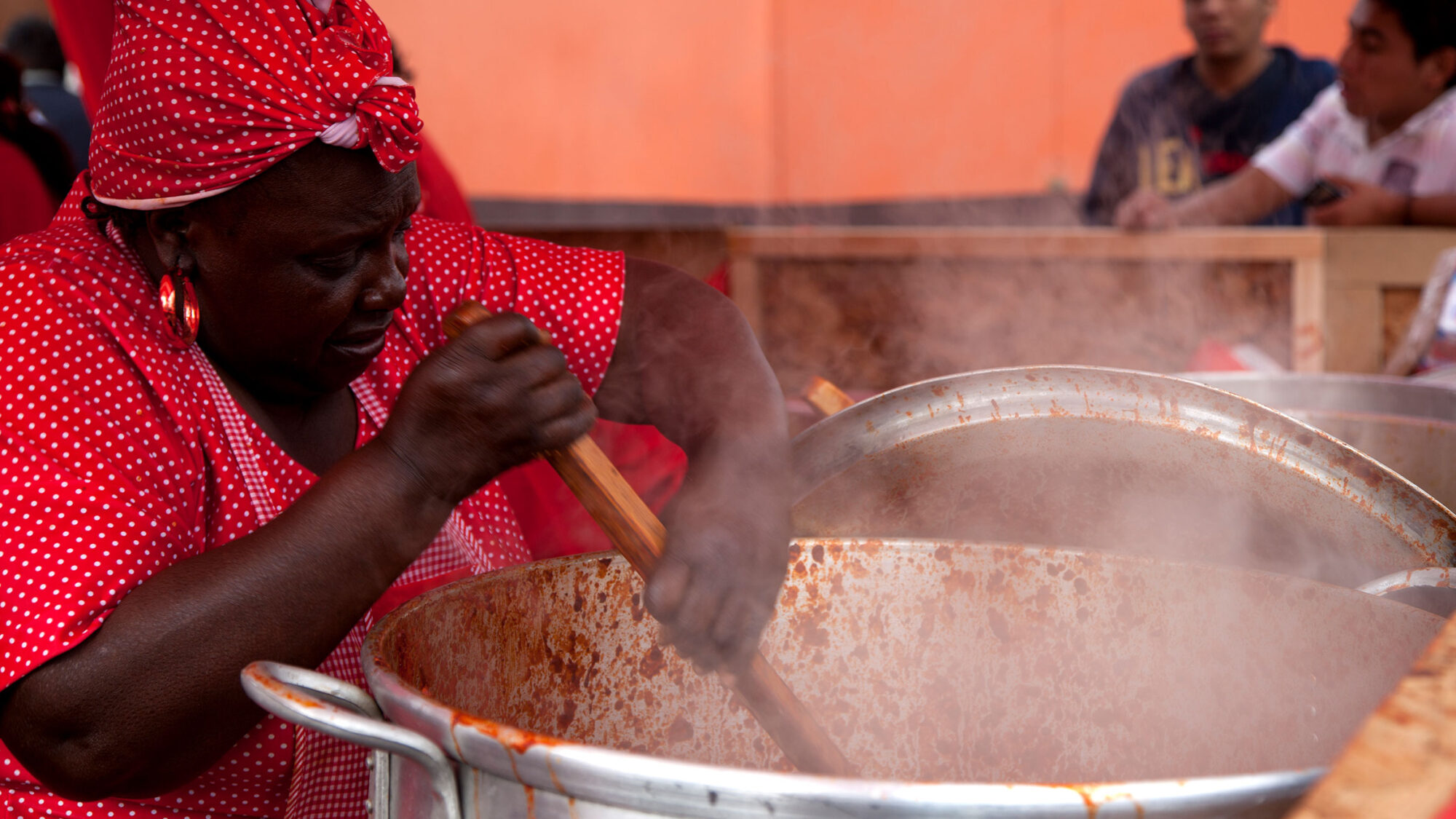 Rooted in slavery, the food of Afro-Peruvians is an integral part of Peru’s culinary identity.

Millions of tourists travel to Peru every year to eat. The draw is Lima’s unique comida criolla (creole cuisine)—the 500-year fusion of Andean, Spanish, African, Chinese, and Japanese culinary cultures. The cuisine is famous for dishes like spicy and citrusy ceviche; cubed sole tossed with salt, limes, hot peppers, and onions; or the ginger and soy sauce stir-fry of steak, onions, tomatoes, and French fries that is lomo saltado. But some of Peru’s most iconic street foods, from grilled beef-heart anticuchos marinated in a vinegar sauce to the deep-fried doughnut-like picarones made from spiced sweet potatoes, come from a legacy of slavery.

Sixteenth-century conquistadors brought Black slaves from various African tribes to the Viceroyalty of Peru. Some slaves came from the Iberian Peninsula or the Caribbean, already spoke Spanish, and were familiar with European dishes. In Lima, they cooked in upper-class homes or performed skilled urban labor. In the Andes, they mined for silver and gold. And on coastal haciendas, slaves worked in vineyards and sugarcane or cotton plantations. Through this oppression, Black slaves gave birth to cuisine and music that their descendants have preserved across generations.

“Peru’s creole cuisine flourished in the creative hands of Afro-descendant women whose cooking was both sustenance and an act of resistance,” says historian and educator Rolando Quiróz. Hacienda owners tossed away lesser cuts of meat like beef heart to their slaves. To make chewy, gamy beef heart palatable and tender, slaves macerated pieces with vinegar, spices, and native Andean hot peppers. Then they skewered them with sugarcane reeds for grilling over wood fire. Today, these anticuchos are an iconic Lima street food, and long lines of evening revelers form at smoky corners where cart vendors cook the kebabs.

“Peru’s creole cuisine flourished in the creative hands of Afro-descendant women whose cooking was both sustenance and an act of resistance.”

“It was Afro-Peruvian women street vendors that made creole food popular,” explains Quiróz. At first, their customers were working-class mestizos and Black Limeños (people from Lima), but over time, creole food’s flavors won over the Spanish upper class. In mid-nineteenth-century colonial Lima, Black cooks transformed Spanish buñuelos into picarones—deep-fried, airy and crispy, anise-infused, amber-colored donuts. For the dough, they replaced eggs and milk with boiled sweet potatoes and squash. And street food vendors today make them the same way—their water-soaked hands shape the dough into rings, toss the rings in hot oil to deep-fry them, and use sticks to swirl and scoop the fritters through their holes. Once scooped out of the oil, they’re bathed in a raw sugar syrup spiced with cloves and cinnamon. Teresa Izquierdo, one of the most emblematic figures in Peru’s comida criolla, fries some picarones. At right, skewers of beef heart cook on a streetside grill in Lima.

In El Carmen, an epicenter of Afro-Peruvian culture some 120 miles south of Lima, Celia Guadalupe prepares creole dishes like her ancestors, by hand, over wood fire. In her modest home kitchen, she doesn’t keep written recipes. Guadalupe cooks menus from memory for locals and tourists that seek a taste of traditional Afro-Peruvian food.

“Creole cooking is my passion, it’s in my blood,” says Guadalupe. “My great grandmother was a masterful cook, and I continue her legacy in the kitchen,” she adds. Creole cookbooks from late-nineteenth- and early-twentieth-century Lima were the first to document traditional dishes. But in Afro-Peruvian communities, families pass on recipes orally. That’s how Guadalupe began learning to cook at age nine, from her parents (she is the daughter of famed Afro-Peruvian musician and dancer Amador Ballumbrosio) and grandparents. And that’s how she’s teaching her daughters.

Creole cookbooks from late-nineteenth- and early-twentieth-century Lima were the first to document traditional dishes. But in Afro-Peruvian communities, families pass on recipes orally.

Guadalupe cooks creole dishes with strong Afro-Peruvian influence, including one of her town’s prized dishes, carapulcra con sopa seca—a spicy potato and peanut stew served with spaghetti that is a culinary mashup of Incan and Italian traditions. “The origin of the carapulcra is Andean, and now it’s popular among Afro-Peruvians,” she says of the stew that Incas cooked with dehydrated potatoes, but that she cooks with fresh potatoes in a garlic with ají panca (red hot pepper) base. “Sopa seca” means “dry soup” in Spanish, but it’s a spaghetti dish with an onion, garlic, achiote, basil, and tomato sauce inspired by pasta dishes that Italian immigrants introduced to local cuisine in the late nineteenth century.

Across generations, Ballumbrosio elders have taught food and music rooted in slavery to their children. Today, Guadalupe cooks creole dishes to preserve her family’s culinary traditions, and her brother Roberto Ballumbrosio preserves his family’s musical traditions through song and dance. He plays the Peruvian cajón—a hollow wood box drum that slaves created centuries ago—to keep alive the rhythms of his ancestors that are now integral to Peru’s creole music.

At the height of the Viceroyalty of Peru, Lima was the capital of the New World, and the Afro-descendant population outnumbered the colonists. Spanning centuries, the culinary contribution of Afro-Peruvians has made Peru one of the world’s top food destinations. And Lima has recognized the late Teresa Izquierdo, an Afro-Peruvian chef, as the mother of Peruvian cuisine and the queen of creole food. But today, only an estimated 3 percent of the country has Black heritage, represented by communities like El Carmen. Like their ancestors, they continue to infuse Peru’s creole food and music with a soulfulness that is rooted in the past but ever evolving.