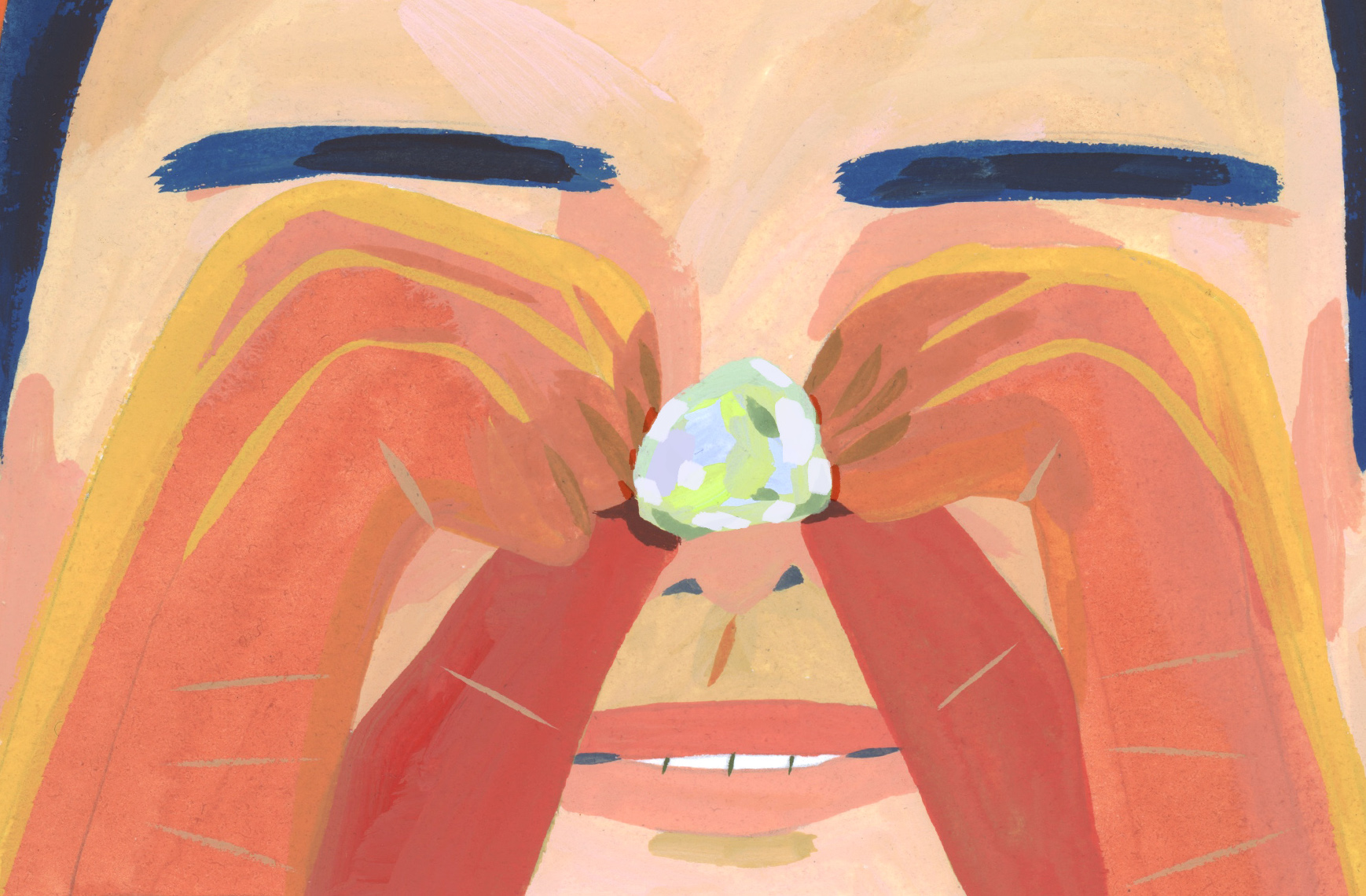 In this piece of short fiction, a man finds himself suffering from a strange hunger that food doesn’t seem to cure.

There once was a man who ate a rock. It was a small rock, nothing big. The man found it in a field, and it was pretty—very pretty—and so he picked it up and he ate it. He wasn’t in the habit of doing things like that—it surprised him as much as anyone—but there it was, on that day, just lying in the field, the rock—the pretty rock—and so he ate it.

The man felt great after he did it. It made him happy to have the rock inside him. And it wasn’t just the physical sensation of the rock, it was also something else. Somehow, the man felt, the rock made him better. Somehow, he felt, it improved him. It gave him a lift, more self-confidence; somehow, it positively changed him.

And the man was very, very happy about it.

And then he told his wife.

You did what? said his wife. You ate a rock?

The man explained to her how it had happened.

That’s insane, said his wife. You’re lucky you’re not dead.
It was just a rock, said the man. It was hardly going to kill me.

But after that, the man started to worry. He wandered around thinking about the rock. Should he not have eaten it? Could it really have done him harm? And, what’s more, could it really do him harm?

He needed to talk to someone about it, but he was afraid all his friends would laugh.

So he went downtown and wandered around and knocked on the door of the doctor.

How big was this rock? the doctor said.

The man held up his hands to indicate the size.

About this big, he said. Pretty small.
Hmm, said the doctor, and frowned.
What do you mean, Hmm? the man said. Is it dangerous?
Well, I wouldn’t say dangerous, the doctor said. It’s just, you know, rocks can grow.
Grow? the man said.

He’d never heard of that.

Grow, said the doctor. When you eat them, that is. Why, I once saw a woman with an eighty-pound boulder in her gut.

He shook his head.

It wasn’t pretty, he said.
So what do I do? he finally said.
It should probably come out, the doctor said.
Out? said the man. You mean, surgery?
Do you really think that’s necessary? he said.
The decision is yours, of course, said the doctor. But personally, I would recommend it.

The man went home and thought about it. He told his wife what the doctor had said.

You should never have eaten that rock to begin with—what did you expect? she said.

I don’t want to lose the rock, he said.

Some time went by. The doctor called.

More time went by. The man was happy. The rock felt good inside him.

But there was one thing that was bothering the man: the rock was definitely growing. The man’s stomach was getting bigger and bigger. It was starting to stick out.

And the rock was getting heavier, too; the man was having a hard time standing up.

And finally, one day, it got to the point where the man couldn’t get out of bed.

So what? said his wife. You’re just gonna lie there?
I can’t move, said the man. What do you want?
This is all because of that dumb rock, his wife said. You should just get it cut out already.
I don’t want it cut out, the man said. It’s my rock. It’s my rock; I ate it; it makes me happy.

Then the pain set in. The rock had grown so big it was crowding out the man’s innards.

You have to do it now, the man’s wife said. You understand—you’ll die if this keeps up.

The man knew that his wife was right. He could feel the rock filling up his body. He could still feel the goodness of it in there somewhere—but it was buried now beneath the pain and fear.

All right, the man said. Go get the doctor.
Finally, his wife said.

The surgery was hard. The doctor needed four men just to lift the rock out. They placed it on a scale, but the scale was crushed and the weight of the rock was never recorded.

Otherwise, everything went according to plan. They sewed the man’s stomach back up. The doctor pronounced the procedure a success, and had a cigar on the porch.

Time went by as the man recuperated. Then one day he woke up feeling fine. He patted his stomach and got out of bed, took a breath, and headed toward the door.

Where are you going? the man’s wife said.
For a walk, said the man. I feel great!

The man went out and walked and walked. It was a nice day and he felt the breeze and saw the clouds and heard the birds and everything was absolutely wonderful.

But after a while, the man started to feel different. He started to feel like something was wrong. He frowned and frowned, trying to figure it out, and then it hit him—it was the rock—the rock was gone! That was why he felt so hollow inside! There was a great big hole inside him!

And the man wiped his brow, and squinted, and squirmed.

And then the bad feeling got worse.

In a panic, the man turned and ran to the field where he’d found the rock on that day so long ago. He looked around, all around, on the ground, everywhere, staring down, walking round in circles.

But he couldn’t seem to find another rock like his. None of them looked right to him.

Oh, there were lots of other rocks, of course, but they were dull and brown and covered with dirt. None of them looked like the right one for him.

He ate some anyway, but they didn’t work.

What am I going to do? the man said. How am I supposed to live like this?

And then it hit him, and he stopped and spun around.

My rock! Where is my rock? he said.

The man ran frantically all the way home.

Where is the rock? he screamed.
What rock? said his wife.
The rock! screamed the man. The rock, the rock! My rock!
Oh, said his wife. It’s out back. It was too heavy to carry very far.

The man went out back. There it was—the rock!—over in the corner of the yard.

The man ran to it. He knelt down beside it.

He wrapped his arms around the stone.

He ran his hands all over its surface. He rubbed his face against it. It was way too big for him to eat, of course, but he held it, pressed it to his chest.

Oh rock! he said. How could I have been so stupid? And how can I get this empty feeling out?

And then the man heard a noise, and the rock cracked open.

And he stared into its dark and hungry mouth.

Ben Loory is the author of the collection Stories for Nighttime and Some for the Day, and a picture book for children, The Baseball Player and the Walrus. His fables and tales have appeared in The New Yorker, Tin House, READ Magazine, and Fairy Tale Review, and been heard on This American Life and Selected Shorts. His second collection, Tales of Falling and Flying, is coming from Penguin in September.