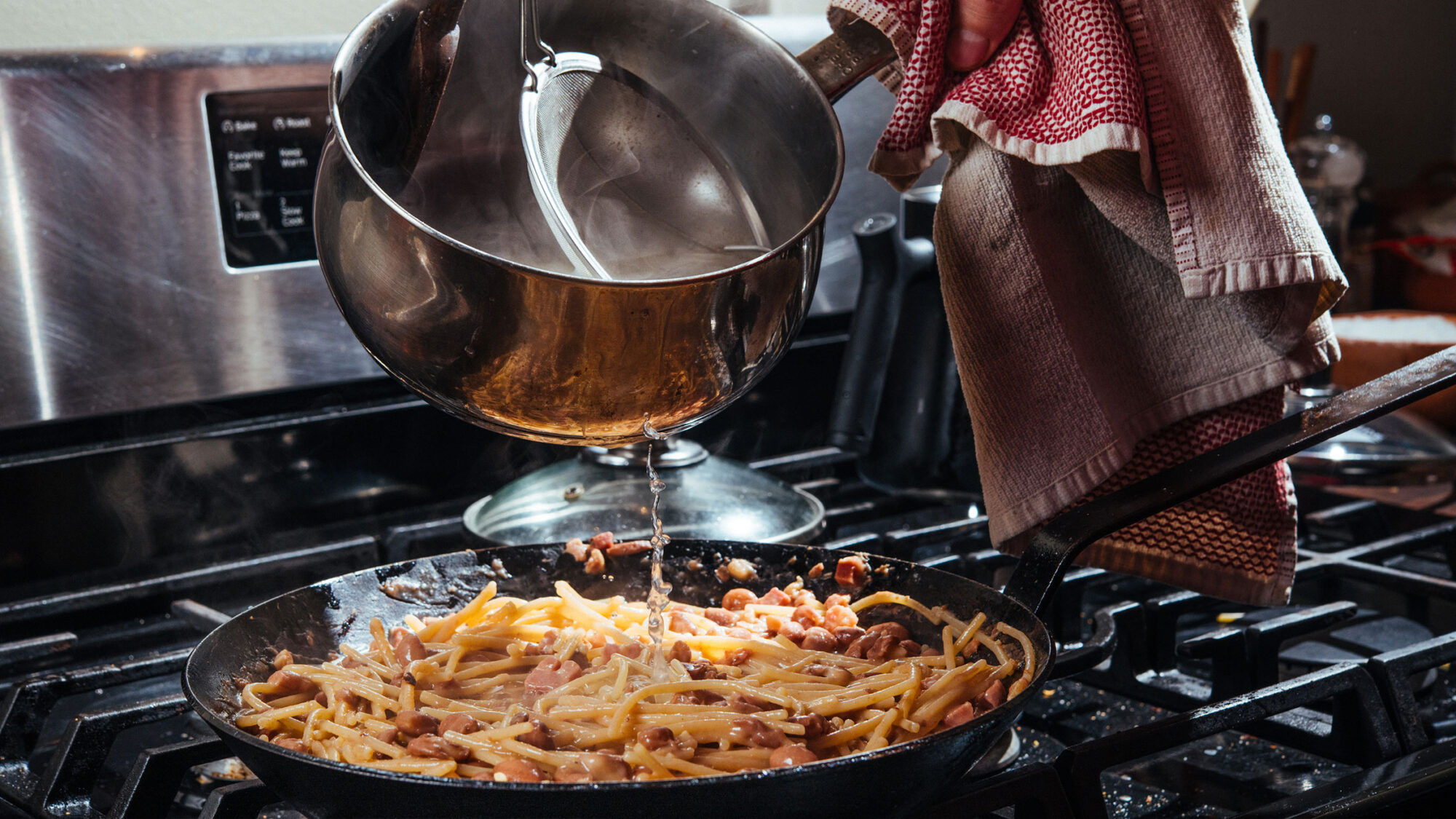 Books call for a simple combination of eggs, cured pork, and grated cheese. It’s not that simple.

Some years ago, I was eating with Robert Steinberg, the late founder of Scharffenberger Chocolate. We were at Sfoglia, an Italian restaurant on Manhattan’s Upper East Side, where he loved to order carbonara—that classic Roman pasta made with eggs, cured pork, and grated cheese. The Sfoglia version was preternaturally rich and creamy, almost suspiciously so. The addition of actual cream is common in the U.S. but straight-up blasphemy for serious Italian cooks. Did the carbonara at this serious little Italian restaurant have cream?

Steinberg, who could be difficult and hard to impress, went on and on about that carbonara. And I liked Steinberg, even though he was a grump, so I asked the chef, Ron Suhanosky, for the recipe to pass on to him. The secret to the creaminess, he told me, almost confessionally, was not cream but a copious amount of egg yolks and cheese. There were no egg whites thinning out the richness in his recipe. With a mere tweak in ingredient parts, Suhanosky had turned what I knew as a weeknight dinner into something almost obscenely rich.

The Sfoglia carbonara was a completely different thing from the one I grew up with in western Massachusetts, which, even though made with whole eggs and pancetta, seemed austere in comparison. My family wasn’t the only one to count it as a favorite. The Italian classic is beloved in neighboring France. In Japan, you can pick up premade versions at convenience stores, and it is so common in Bangkok that the local media loves to run lists of the top 15 places to get it. With an inexpensive, four-item ingredient list, the dish is now a staple nearly everywhere.

Carbonara is a relatively new phenomenon even in Italy. “A lot of the chefs and home cooks I’ve interviewed remember it being introduced in the late 1950s and early 1960s, and it being dismissed as too modern, too heavy, a trend,” says Katie Parla, the author of Tasting Rome. “Like some trends, it caught on and was eventually brought into the canon of Roman pastas.” How it got to Rome is a bit murky. Some say that American GIs stationed in Italy during World War II had locals cook with their army rations of bacon and eggs, and the dish was born this way.

“The American GI thing makes no sense,” Parla asserts. “You can’t make carbonara with powdered eggs. And you don’t have anyone mentioning carbonara in the postwar era. It’s an absurd claim.” In a more believable but still unconfirmed tale, carbonara was named after coal miners, the carbonai, who brought the dish down from the mountains. The ingredients could be gathered from local farms and kept without refrigeration, and the dish prepared over a wood fire with one pot. “There is a Neapolitan cookbook that has an egg-based, pork-rich dish before the ’50s,” recalls Parla. “We don’t know the origins, but the strongest claim you can make is that there was this dish in Naples and you had a lot of people coming to Rome from Naples in the postwar era.”

What is not in contention are the ingredients, humble foodstuffs that people in rural areas could flesh out into a full meal. Raw eggs make the sauce. A combination of pecorino Romano and Parmigiano-Reggiano liven it up with a lactic tang. Morsels of guanciale (air-cured pork cheek) and/or pancetta (seasoned and air-cured pork belly) provide a salty, porky chew. And all sorts of pasta—spaghetti, linguine, bucatini, and even rigatoni—are acceptable. The ratio of ingredients, as I found out so many years ago, is less agreed upon. The amount of whole eggs, yolks-only, and cheese varies wildly from recipe to recipe. Using more yolks makes for a richer sauce, but also one that can dull the flavors of the cheese and pork. “Home cooks tend to use whole eggs to a greater extent than restaurants do,” says Parla. “Most Roman kitchens use an egg-yolk-heavy sauce. The average standard I’ve seen is for every three to four egg yolks, there’s a white.” Parla’s own recipe uses four whole eggs.

For all the purist hand-wringing about the addition of cream, it’s not going to ruin the dish; it just won’t be carbonara anymore (Italian cookbook author Biba Caggiano makes a twist on carbonara with mascarpone). Scrambling the eggs, however, will ruin your meal, regardless of your preference. So will a watery sauce. Both the egg whites and the addition of starchy pasta water will help the sauce bind, but you have to bring in a little heat to reduce it, which introduces the risk of scrambling the eggs.

Suhonsky cooks down a full cup of pasta water with six yolks, constantly tossing the pasta with tongs, in a hot pan. This is the riskier chef move. Some recipes even recommend holding the pan above the flame while you stir in the pasta and eggs so there aren’t hot spots. It will ensure that your pasta is warm and your sauce clingy, a codependent relationship if ever there were one. A more foolproof method is gently cooking the sauce in a double boiler. It’s a little more finicky than tossing everything in a pan, but Parla, among other cooks, favors it for the custardy quality it lends.

As long as you take care to gently heat your egg sauce, carbonara is an easygoing recipe, flexible to your situation or preferences. If you’re feeling baroque, you can anoint your pasta with a half dozen yolks and fistfuls of grated pecorino. You can split the difference with two whole eggs and two yolks. If there are only two eggs and a nub of parm in the refrigerator, and you don’t want something heart-stoppingly rich, you can still eat like a king, or a coal miner, as it were.