Get a free recipe
Subscribe
The More-Is-More Way to Étouffée
By: Scott Hocker Photos: Denny Culbert 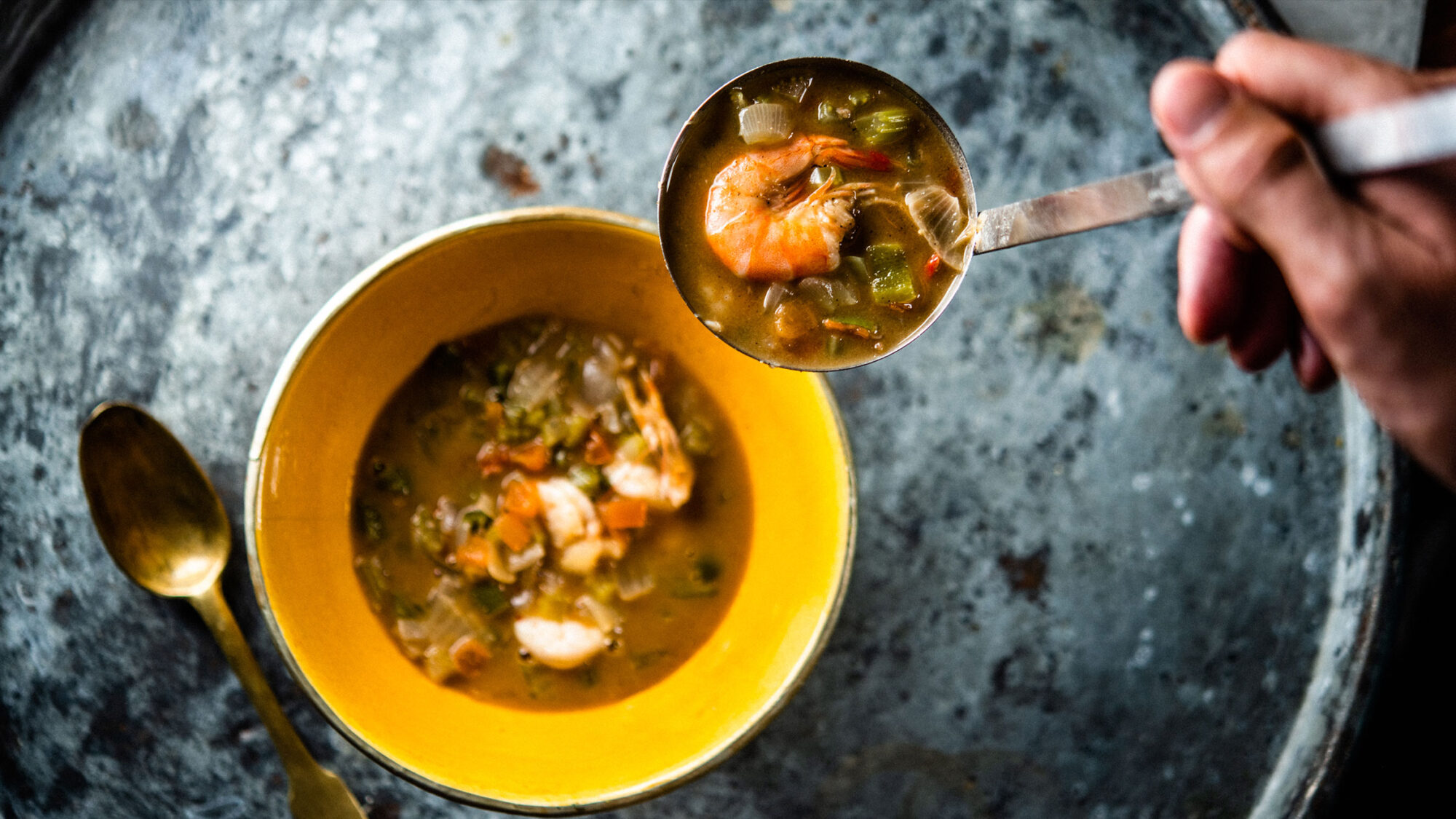 It starts with a darker roux, a generous smother, and a heady blend of ginger, cardamom and coriander, thanks to Asha Gomez.

Down where I live, in New Orleans, there is little worse than encountering underseasoned food. Black people here mock white people for their proclivity toward the blandest of bland foods: boiled chicken, flavorless potato salad. A crawfish boil that does not leave you sodium-swollen like a pufferfish on a bender is no boil worth attending.

Righteous seasoning has a range of meanings. It can signify a steady baseline of sautéed onions, green bell peppers, and celery. It can suggest a fillip of black pepper. It can denote chile heat, whether fresh jalapeño, ground cayenne, or liquid hot sauce. Often, all three are united, such as in, say, a good gumbo, a dank crawfish stew, or a lush shrimp étouffée—shrimp “smothered,” as its name denotes, until the crustaceans hover in a mantle of roux and long-cooked flavor. Well-seasoned food, to me, before my white self moved to the Deep South, was epitomized by the cooking of the Indian subcontinent: an array of spices, layered for an aggregate effect, that fuses into a greater goodness. When I started cooking mustard seed–laden cabbage sautés and potatoes rife with the low hum of toasted cumin and the brightness of coriander, I began to understand how sharp seasoning could suffuse a flatter dish with life. I never thought to merge the cooking of India and the Deep South, though, until reading Asha Gomez’s My Two Souths.

Righteous seasoning has a range of meanings. It can signify a steady baseline of sautéed onions, green bell peppers, and celery. It can suggest a fillip of black pepper.

That 2016 book cracked wide my estimations and melded my interests. Gomez was born in Kerala, and her South Indian heritage spreads across her cooking. Roasted sweet potatoes with brown butter and clove. Rice-flour dumplings in her take on chicken and dumplings. And her shrimp étouffée, taking the well-trod road map of the south of Louisiana and seasoning it yet further. Black pepper, of course, a key export from the shin of India—as well as cardamom and coriander and musky ground ginger. A roux, to begin. You cook the butter and flour with assiduousness, until the mixture goes golden brown. Onion, green bell peppers, and celery are added. I, unlike Gomez, go for full-bore smothering rather than quick sautéing. I cook the vegetables under cover for a long 20 minutes, wisdom gleaned from a South Louisiana chef, Melissa Martin of Mosquito Supper Club. Then tomatoes, stock (ideally made from shrimp shells, but clam juice or even chicken broth will work), and that quartet of ground spices. I tend to grind my own, for maximum force, if I am feeling industrious. When I’m feeling lazy, which is often, I use pre-ground. I also include cayenne, because I want my étouffée to thrum. In the meantime, you toss peeled shrimp with another round of ground black pepper, cardamom, coriander, and ginger. Into the pot you place them when the stock has become half its former self. Minutes later, the stew is thick, the shrimp newly opaque, the spice waft explosive.

Each time I cook this étouffée, I adjust the recipe. The cayenne is a recent addition. The roux goes a mite darker with every batch. The vegetables stew longer the more times I cook Gomez’s shrimp. South Louisiana will never quite be in my blood, because I am not from here. I will, however, season and build flavor whenever given the opportunity. White people I am. Just not the seasoning-less kind.