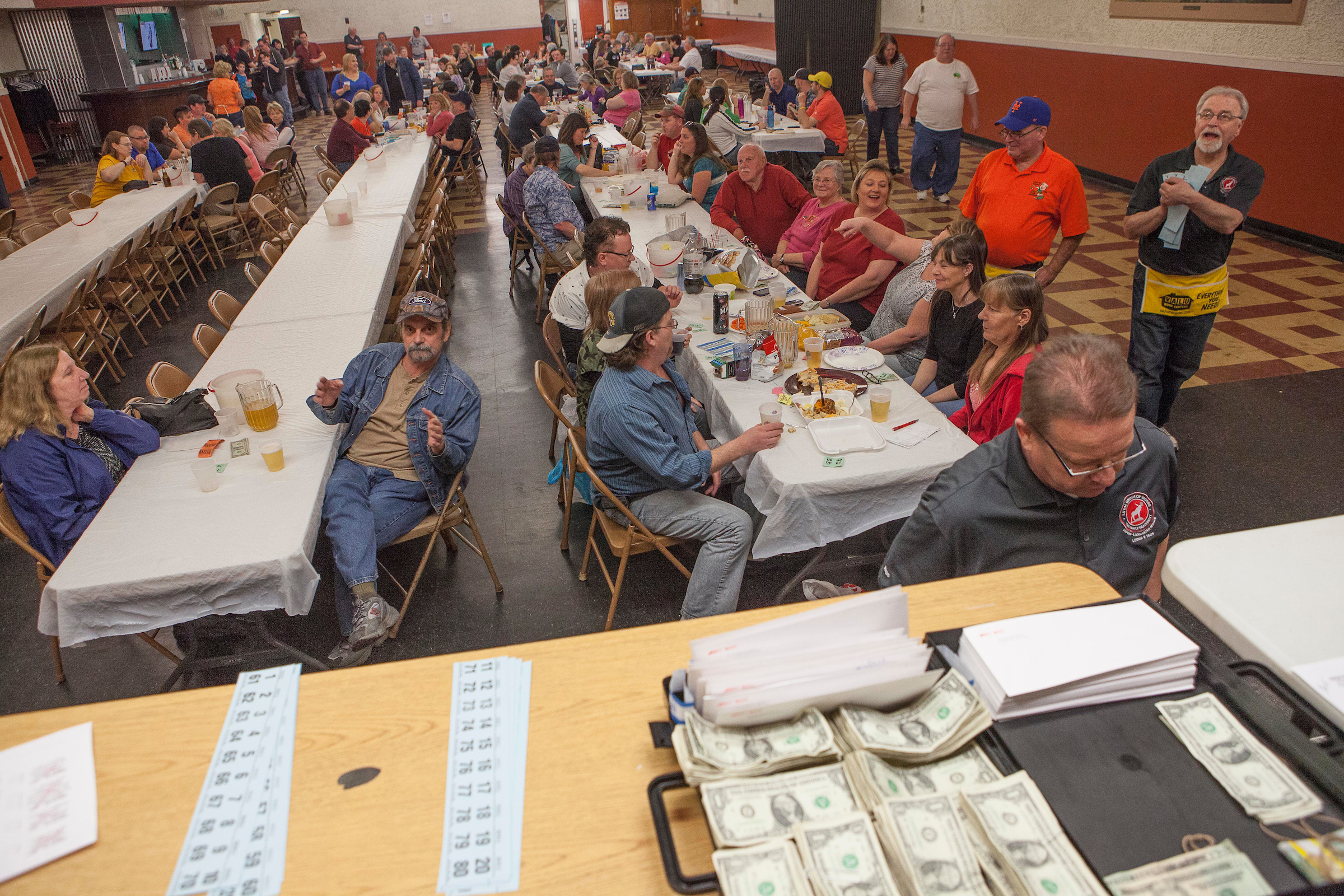 Every small town has its share of community fund-raisers, but in Western New York, it’s all about the meat raffle.

Hundreds of people have crowded into the main hall of a fire department in West Seneca, New York. They are seated at long plastic tables, shoulder to shoulder, and they shuffle sideways to squeeze between the rows in search of the last few empty folding chairs. There are young men wearing T-shirts and cargo shorts. There are women who look like they have come from their office jobs. There are senior citizens bundled in sweaters. Someone, inexplicably, is wearing a yellow foam fireman’s helmet made to look like Swiss cheese. They eat from open bags of chips. They drink beer—lots of it—from kegs of Labatt’s and Budweiser. At the front of the room are hundreds of pounds of meats, in chest coolers and arrayed on tables like the offerings at a yard sale.

This is a meat raffle in the suburbs of Buffalo, one of at least a dozen taking place on this particular weekend in March. It’s a fund-raising event for the East Seneca Volunteer Fire Company, the first of two to be staged this year. The 325 people in attendance pay $1 for a chance to take home some serious meat.

Community meat raffles like the one in West Seneca are part of a robust tradition concentrated in Western New York, Wisconsin, and Minnesota. Allegedly the events started in WWII-era England, with neighbors pooling their rationed food for a bit of entertainment and a chance to eat more meat that week. In Western New York, they’ve gained a sudden uptick in popularity over the last ten years. A locally run website, Western New York Future Meat Raffles, tracks dozens of them each month (especially in colder months), at veterans’ halls, fire departments, and church basements.

The mood at this particular meat raffle is anticipatory when emcee Bill Heusinger, in his white sweatshirt (airbrushed, like the kind you can get customized at a county fair, with an image of a cartoon turkey, a colorful prize wheel, and “MEAT RAFFLE!”), picks up the microphone.

“Let’s get started,” Heusinger bellows, to cheers from onlookers.

Seated next to me, a woman of about 70 explains that for every round, there are three spins. The first spin winner gets their choice of the offerings, the second spin wins something “good,” like steak or pork chops, and third spin is for something cheap, like baloney or hot dogs. I ask her name, but instead of telling me, she just insists that I rub her meat raffle lucky charm—a smooth, palm-size rock debossed with a shamrock and the words “LUCKY BLARNEY STONE.” A few winners after this first spin walk away with hams, foam packages of pork chops, and some strip steaks. I check the numbers on my tickets but come up empty.

It’s hard to say exactly how long these events have been staged here in Buffalo, but Norman Locher, East Seneca’s fire chief, says it was only recently that he became aware of the phenomenon. About six years ago, he heard of another fire company that held a meat raffle and raised a small fortune over the course of an evening. In 2012, he tried it out. His company profited $2,000 from their first event, and $4,000 from their second. Profits and attendance climbed steadily. Before long, they had purchased their own prize wheel, dozens of long, portable tables, and hundreds of folding chairs.

“It’s a good night out. We like to encourage the hootin’ and hollerin’,” he says.

The evening’s meaty prizes are generally tied as much as possible to seasonal cooking, Locher says. For the spring event, there’s a focus on grill favorites, like steaks, hot dogs, and hamburgers. For the fall event, they give away dozens of turkeys and large hams. Some meat raffles offer more premium cuts, too. People are lured not just for a night of cheap and slightly rowdy entertainment (there are “meat” puns aplenty), but also for the possibility of winning a rack of ribs or a large tenderloin for a tiny investment. But a meat raffle’s success is based on efficiency and low overhead. The organizers purchase meats from local butchers, some of whom have special packages on offer especially for raffles. At the event itself, there’s usually a $5 door fee, which includes a slice of pizza or a sandwich, and often all the draft beer you can drink. The events can be hugely profitable for fire departments, baseball leagues, or cheerleading squads. One local family recently held a meat raffle to raise enough money to adopt a child.

While tracing the rise in popularity of these events, I was introduced to Mark “The Meat Man” Demmin, a 54-year-old stainless steel salesman (and the man behind the “Future Meat Raffles” website). In 2009, he attended a meat raffle at his daughter’s high school. He was so taken with the novelty—and the fund-raising potential—of the event that he began staging his own, for a fee, on behalf of local charity groups and nonprofits.

“From there, it took off. He started doing them everywhere,” says Demmin’s daughter, Caitlynne, 23, who has become an informal partner in her father’s side gig. She says she is booked nearly every weekend between Labor Day and Memorial Day, with a few quiet weeks in December and January. She and her father average five events a weekend between the two of them. And many organizations run their own events. If anything explains the proliferation of meat raffles around Buffalo over the last eight or nine years, she told me, it’s her father’s enthusiasm for them. By the end of this raffle, two and a half hours after its start, the fire company has netted a bit over $10,000 to support activities like a Firemans’ Day event, demonstrations at local schools, and food for its own members at events throughout the year. A few dozen of the 300 or so in attendance walked off with some meats, and several collected big-ticket door prizes like a set of golf clubs, a television, and a combination gas and charcoal grill.

I leave cheerfully with a five-pound bag of off-brand hot dogs. “Those will ruin your grill,” says Mrs. Blarney Stone when she sees my measly winnings. I end up keeping the bag in my fridge for about two weeks before throwing them out, unopened. Ultimately, though, it’s the extremely cheap beer and the company of hundreds of people having some ridiculous fun, while engaged in the fundamentally human activities of sharing food and tempting fate, that makes the meat raffle worth attending.

Dan Higgins is a writer living in Buffalo. You can find him on Twitter at @dan_higgins.