Get a free recipe
Subscribe
The Internet’s Friendliest Barista Is Also the Nation’s Best
By: Ashley Rodriguez Photos: Nick Hensley 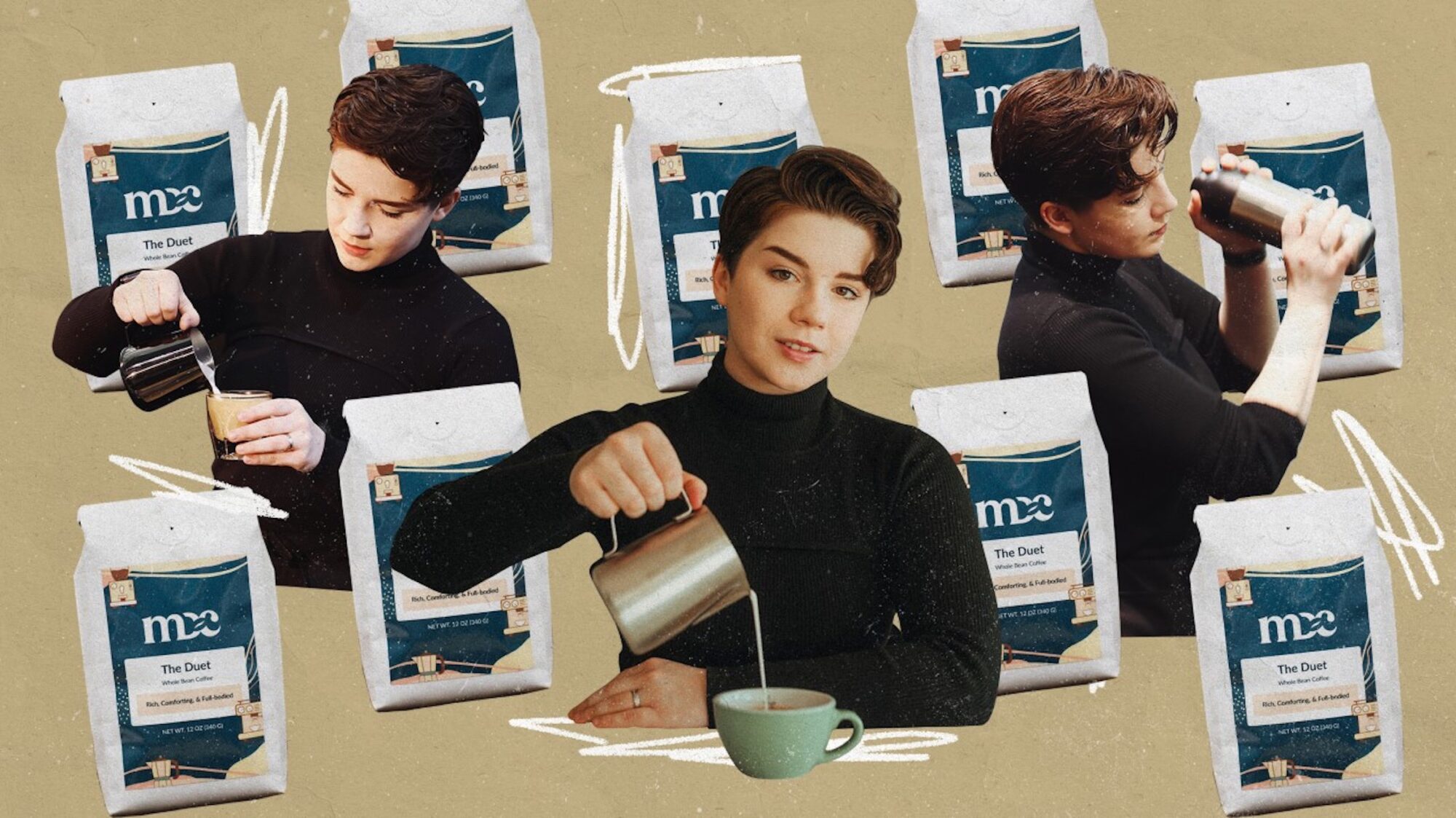 Morgan Eckroth may be the new US Barista Champion, but to their 5.5 million TikTok followers, they’re just really great at talking about coffee.

“Friendly” and “barista” are two words that don’t always go together. The trope of the mean, ur-hipster barista shows up often in popular media: think Ray Ploshansky, the disgruntled café manager and love interest of Shoshanna in Girls, or a recent ad by Panera Bread featuring Wells Adams, a contestant from The Bachelorette, as a barista crafting ridiculous drinks with ingredients like unicorn milk. There’s even a series of memes about hipster baristas, and none are particularly warm and fuzzy.

Morgan Eckroth (she/her/they/them) cuts right through that tension. Eckroth describes themselves as a “friendly internet barista,” crafting TikTok videos where they play the role of both barista and customer. And if there’s any correlation between followers and friendliness, Eckroth is surely the internet’s nicest barista—they have over 5.5 million followers and 333 million likes on their TikTok page alone, metrics in line with some of the platform’s top creators.

As of just a few weeks ago, Eckroth is also the nation’s best barista. They competed in the 2022 United States Barista Championship, a rigorous competition that asks competitors to present three sets of drinks to a panel of sensory and technical judges—and won with two different coffees from Onyx Coffee Lab and a signature drink they designed for people to replicate at home. If there were ever a competition to compare with the “Olympics of coffee making,” this annual event would be it. Eckroth will go on to represent the United States in the World Barista Championship, which takes place in September in Melbourne, Australia—and, like their run-up to the US competition, intends to take their followers along for the ride.

Why did you become a barista? Had you always been interested in coffee, or did that passion grow over time?
I often jokingly say that my act of teenage rebellion was becoming a coffee drinker. I didn’t grow up in a family that drank coffee, so my first experience with it was when I was 16 and got my driver’s license. I found my way to a café to study at, and it just . . . clicked. I knew I wanted to work as a barista almost instantly. However, I don’t think I realized just how much it would click until I finally got my first barista position at 18.

I have incredibly fond memories of being a young, inexperienced coffee drinker and shakily ordering things like cappuccinos and espressos just to see what they tasted like. My first interactions with baristas were steeped in empathy, patience, and acceptance. I knew that I wanted to find a way to pass that experience on to others, so when I started in coffee, I threw myself wholeheartedly into hospitality and customer service.

Why did you start documenting your barista experiences on social media?
Frankly, I didn’t start out with a goal. It began as a combination of being interested in social media, due to my (at the time) ongoing marketing degree, and being at work probably more than I should have been. After begrudgingly accepting that I was becoming a “content creator,” whatever that means, I decided to sit down and hash out what I was trying to do with what I was creating. I came to the conclusion that I wanted to catalog what it was like to be a barista in the most accurate way possible: the good, bad, ridiculous, and otherwise.

The job of a barista is a massive bundle of skills encompassing everything from the hard skills related to coffee knowledge to the soft skills of hospitality. My goal was to add value to the role by demonstrating the magnitude of the job in a lighthearted fashion.

I’m so used to seeing baristas portrayed in a negative light in movies and television. It seems like, in any portrayal of coffee, there’s a tension between customers and baristas, and your page legitimizes both perspectives (since you usually play the role of both barista and consumer in your videos) without making either party feel or look bad.
Coffee is a wonderful thing. It can be serious or silly or everything in between all at once. We can’t expect consumers outside the specialty coffee industry to find connection with us if we approach them with the expectation that they have the same foundation of knowledge we do. To foster trust and interest, people need to be able to see themselves represented.

Why did you decide to compete?
I competed at the national level of the United States Barista Championship (USBC) in 2019 and then at the regional level in 2020. Coming into 2022, I knew I still had that itch to compete, and I also had the long-running goal of creating some sort of video capsule around competition that could hopefully benefit future new competitors. I tried to set my audience up with as much context for the USBC as possible, because it’s a strangely intense competition to wrap one’s mind around. I think the biggest reaction I got online when I first mentioned it was, “Wait . . . there are barista competitions?” To which I then responded, “Oh, yeah, and they’re so much bigger than you can imagine!”

Barista competitions are weird—there, I said it. They’re very niche, they’re hard to explain, and we’ve been hosting them for the last 20 years without much mainstream exposure. But you managed to make competitions super accessible and bring in an entirely new audience.
Barista competitions are very weird; you’re 100% right. I started chronicling this competition season through the lens of “I’m doing this weird thing, and you’re coming with me,” because I truly believe that the USBC is, at its core, entirely collaborative.

In this case, part of that collaboration was with my audience. I set the expectation that anyone watching my videos would be able to participate in the day-of competition, which I think helped people justify investing their time into watching me freeze-distill multiple gallons of milk at a time [laughs].

In an ideal world, I hope the lasting impact of my routine and process is more future competitors feeling enabled and emboldened in their ability to compete. I cemented my passion for coffee through the journey of competing for the first time and engaging with the larger coffee community as a whole. I want that for others, and I want them to feel like they can do that for themselves if it’s something they’re interested in.

How did you choose the coffees you used?
I used two coffees from Colombia this year, both from Finca Inmaculada, roasted by Onyx Coffee. In my milk course, I used a natural Eugenioides coffee, and for my espresso and signature, I used a natural anaerobic Sudan Rume varietal. Both these coffees were incredibly exciting to me for different reasons. Eugenioides is such a fascinating species—I immediately wanted to use it with the goal of talking in-depth about it with my audience. That, and it’s frickin’ delicious when paired with milk.

Your signature drink was ambitious but also accessible. It’d take some work, but someone at home could replicate it if they wanted—was that intentional? How many iterations did the drink go through? What flavors in the coffee were you trying to highlight?
It was very intentional. One of the early ideas for the routine was for the at-home audience to have a “tasting plate” of sorts, with ingredients that mimicked the flavor calls of the courses. Unfortunately, that turned out to be too much to bite off (for now). However, we went into the signature beverage development with the rule that whatever we made had to be replicable at home. We wanted that powerful reveal of telling the judges that what they were about to drink was accessible and actively being replicated by viewers all over the world.

Our final drink went through two major iterations, but we settled on the recipe fairly quickly. We needed to create something that was transformative when paired with the Sudan Rume, elevating its tropical and floral notes, but also something that would taste delicious with similar coffees. When filming the signature drink instructional video, we instructed viewers to specific coffee profiles and roasts that would closely match the Sudan Rume so that they’d be able to have the most accurate replication possible without being able to access the exact coffee I was using.

Your win is a big deal—I’m sure you know this—but what do you hope your win represents? What do you hope for the future of coffee in general?
I can only hope it will continue to drive down the walls of knowledge that often barricade the specialty coffee industry. The goal, always, is to add value to this industry and plant that we all hold so dear. Coffee means community, empathy, and shared experiences. It’s a beautiful thing that ties so many of us together, and it can reach so much further, but only if we’re willing to put in the work.