Get a free recipe
Subscribe
The Instant Pot Has a Honeymoon Phase
By: Kenzi Wilbur Illustrations: Dingding Hu 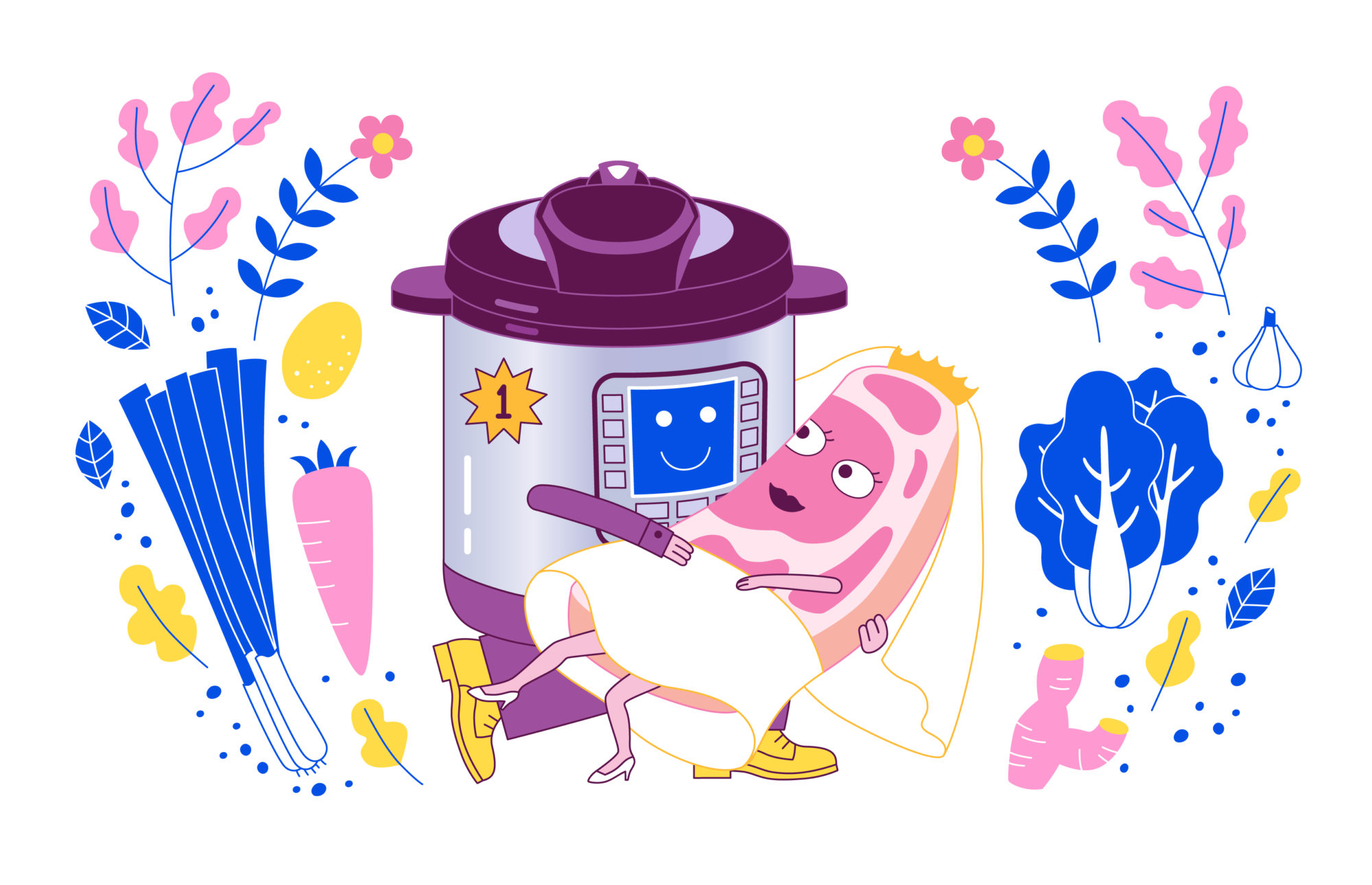 The first viral cooking appliance is an emotional trial by fire.

I had just moved across the country with a man—let’s call him Matt. Not in a Let’s do this, baby, I want to be wherever you are way. More in a Fuck it, I’ve always planned on being spontaneous and I guess Colorado seems cool way, but still. For the drive, and for the week or two after we settled into separate apartments there (give me a little credit), Matt was it: All five-o’clock-shadow-y and career-driven and hilarious, and he drove me everywhere I needed to go. (I’d sold my car so I could afford Colorado, a decision I wouldn’t realize was ironic until I first walked the four miles from my apartment to “downtown” Boulder.)

At some point during the third week, something changed. Actually, his face is enormously prickly. Dangerously so. Wait a minute: Is skateboarding even a real career, Matt? Whoever used the word “hilarious”—was that me?

I think about Matt when I cook with the Instant Pot, and not because I’m recalling fond memories as my device comes up to pressure—though I could recall a lot, because in many cases I have 20 long minutes to kill. The first time I used it, I spent that time wondering if I’d done everything wrong; I hadn’t yet learned the fun idiosyncrasy where after you press start, your Instant Pot silently seems to do nothing. I think about Matt because with him, much like with the Instant Pot, I let the hard sell go straight to my head. I confused mild convenience and mediocre company with love. And then I woke up.

In this, the Dawn of the Instant Pot—the era in which we build elaborate shrines in the form of YouTube videos, community forums, and media attention aplenty to the the world’s first viral cooking appliance—people rarely talk about what comes as a result of all this Kool-Aid drinking: the Instant Pot honeymoon phase, and worse, the post-honeymoon slump that comes after. We don’t see it coming because we’re blinded by the shiny, irresistible promise of a better life in the kitchen: Steel-cut oats in four minutes! Dried beans ready in 30! Literally everything, doesn’t matter what it is, in half the time!! But because of the time the device needs to come up to pressure—and then to depressurize, after the food is done cooking, especially if your recipe calls for a “natural release,” which is basically another 10- to 30-minute period of waiting, staring, checking Twitter—this is hardly ever true. By my third batch of 4-but-really-30-minute steel-cut oats, I felt the fog start to lift. This thing is not instant. In an article for Psychology Today, Jeremy Sherman cites the honeymoon phase as a celebration of compatibilities. See: Oh, my God, I love it when my dinner cooks quickly, too! I *also* hate remembering to soak my beans! Colorado seems totally fine! And then, as quickly as your oats were supposed to cook, in sets “a sobering recognition of, and reluctant response to, the incompatibilities.”

A few things start to change during this period other than the realization that those “lightning-fast oats” take exactly the same amount of time as the ones I could cook on the stove. Sherman, who probably also bought an Instant Pot, says you’ll be frustrated by those incompatibilities, like promises that were made weren’t kept. Or, he says, as though you’d bought a product that didn’t work as advertised.

Which is the problem: The Instant Pot’s advertising is all wrong. The name is all wrong! If I’d gone in with the notion that “this appliance is going to make great beans and enable my laziness as a cook,” we wouldn’t be here, on the floor, softly weeping, lamenting the fact that this plastic machine did not, as promised, buy me back hours—years!—of my life. This is not an Instant Pot; it’s a hands-off pot. A guarantee that I won’t have to stir a thing or readjust any heat or generally pay attention to my food if I don’t want to. That’s a gift, sure, but not the one I was promised.

Yes, I should have read between the lines—that pesky fine print telling me all the minutes that would bookend the “instant” cook times, or, say, the less-fine print that Matt was, in fact, not very interesting. But when you’re caught up in the dream—whatever dream it may be—who has the time for that?

I expect things with the Instant Pot will end better than they did with Matt. Sherman says I need to do something he calls “pull out my negotiating toolkit,” whatever that means. And that I’ll probably think, “Why should I have to do that?” or “Is this settling?” which I certainly have, at least a few times, while waiting for my Instant Pot to stroll on up to pressure (take your time, IP, the weather’s nice). More likely, I’ll make some more hands-off batches of oats (I’m a curmudgeon, but they are really creamy, okay?), or that pho broth I made (actually very good), or stewed chickpeas (yes, fine, excellent). Yes, I’ll definitely make those chickpeas again.