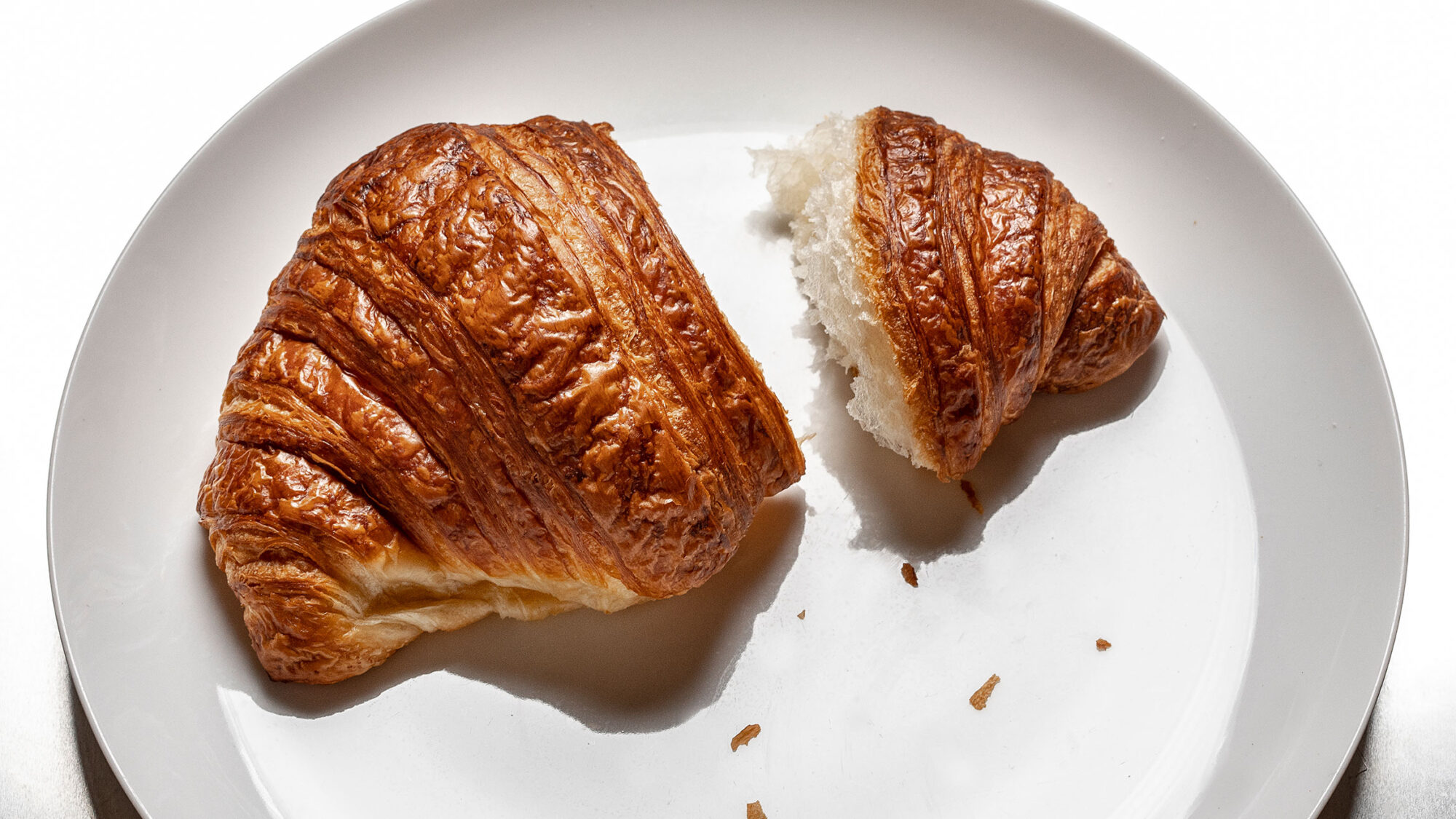 Humans may have invented the croissant. But machines perfected it.

Last week, I ate a wonderful croissant. Shaped in a familiar crescent, with the points fused in the center, this croissant was buttery but not oily, light but still substantial, and its layers peeled and flaked off without reducing the whole thing to a pile of sharp shards and crumbs. The first bite was pleasantly sweet, all the better to complement its savory filling: a sausage patty and a slab of too-yellow egg, just warmed through in its greasy wax paper packaging. I was at a rest stop off the New Jersey Turnpike, and the Burger King Croissan’wich, which has been in rotation on BK’s menu for longer than I’ve been alive, was the obvious and best choice for a meal on the road. A breakfast sandwich made between two halves of a croissant? Say no more.

At this point in my life, I’ve eaten croissants from just about everywhere that I can get my hands on one, but as is often the case when a food is deeply connected to a country’s national identity, the experience of eating a croissant in France can feel like communing with the height of the form. The dingiest boulangerie in the neighborhood in Paris where I lived for nine months had croissants that could make me tear up, even though I knew deep down that they weren’t really that good. A French croissant made with French butter by a real French baker always had that certain je ne sais quoi.

“It has to be a thrill for anyone,” Jim Chevallier, a food historian of French foods and the author of August Zang and the French Croissant, tells me by phone. “You have a whole confluence of people’s emotional expectations and nostalgia.” That experience is due in part to France’s historically good PR campaign for itself, he says. “Part of the image of France, and one of France’s big selling points, is that the French version is better,” Chevallier explains. “There’s a certain amount of national pride in it.” A Croissan’wich—having been invented in America in the 1980s by a fast-food chain—might not, by extension, seem as legit.

When you start to peel back its buttery layers, you’ll learn that even this quintessentially French pastry is itself dubiously French.

But when you start to peel back its buttery layers, you’ll learn that even this quintessentially French pastry is itself dubiously French. In Larousse Gastronomique, an encyclopedia of food history, croissants are said to have originated in Budapest in 1686, “when the Turks were besieging the city.” The story goes that the Hungarian bakers, who worked underground, sounded the alarm that the Turks were coming, and as a result of their patriotism, they were permitted to make pastries in the shape of a crescent, the emblem of the Ottoman flag. Other sources claim the pastry was invented during the siege of Vienna years earlier. Chevallier writes that if either of these stories were true, the bakers would have made a buttery roll based on an Austrian kipfel, not a flaky croissant, and that roll was invented long before either siege. Chevallier also debunks the well-circulated myth of Marie Antoinette bringing the pastry with her from Austria.

Chevallier links the arrival of the Austrian kipfel in Paris to August Zang, an enterprising Austrian businessman who opened the Boulangerie Viennoise around 1839. “Zang was very much a hustler and an entrepreneur,” Chevallier explains, and his savvy marketing made the kipfel explode in popularity across Paris. French people called the Austrian kipfels “croissants” because they were crescent-shaped (“croissant” is the French word for “crescent”). It was near the end of the 19th century that French bakers began incorporating thin and buttery laminated dough into their kipfel rolls—the kind of dough that makes croissants flaky. “The croissant changed, but people still thought of it as Viennese.” Partly because of its labor-intensive preparation and partly because of its extreme butter content, the croissant has been elevated to an almost mythological status for food fans around the world. Its dough is pressed firmly (or laminated) with layers of butter, refrigerated, and proofed for long hours, then cut into precisely measured identical shapes. Its particularity and precision are qualities we tend to associate with Frenchness. Aurélien Legué, head chef instructor at Le Cordon Bleu Ottawa Culinary Arts Institute, writes by email that Le Cordon Bleu defines a croissant as “a buttery, flaky viennoiserie made with a pâte levée feuilleté (layered yeast-leavened dough), rolled and shaped in a half moon.”

In the early 1970s, the first industrialized croissants steamrolled right over this careful process and caused an uproar. Just as fast food was proliferating in France (the first McDonald’s arrived in France in 1972), Jean-Luc Bret opened the first La Croissanterie in 1977, where croissants were mass-produced on machines and cranked out all day long, not only for breakfast. This evolution from meticulous, handmade preparation to a machine-mixed, kneaded, laminated, and shaped croissant began to spill over into other countries, bringing the Croissan’wich to Burger King in 1983 and similar items to other chains like Starbucks, McDonald’s, Wendy’s, and Dunkin’ Donuts soon after. Now, you can get a vacuum-sealed croissant just about anywhere, as long as you’re content with it being eerily shelf-stable.

The act of making a croissant, Chevallier says, is meticulous, “but most things that are meticulous about it can be industrialized.”

“There’s a point where it’s like the emperor’s new clothes,” Chevallier says about the difference between a handmade and a machine-made croissant. “You’ve got a continuum from really disgraceful things like these French cafés that sell crescent-shaped bread—that’s almost fraud—and then the other end, where things are really pretty good, and people are claiming that they can taste the very exquisite nuance in this thing.” The act of making a croissant, Chevallier says, is meticulous, “but most things that are meticulous about it can be industrialized.”

In America, you can’t get fresh, perfectly crafted and human-made croissants on every corner, like you can in France, so the mass-produced options more than scratch the itch, even if they’re not made with high-fat Breton butter and farm-fresh eggs. At Dunkin’, croissants have been on the menu for “decades,” Mike Brazis, director of global culinary innovation at Dunkin’ Brands, wrote by email. “They are baked fresh every day in a process of folding thin layers of dough, sometimes until there are more than fifty layers.” Doesn’t that make them just as much a croissant as a croissant produced at the legendary Boulangerie Utopie in the 11th arrondissement? “We think our croissants are a great expression of the form, with a light, flaky texture, delicious aroma, and delicate but satisfying flavor,” Brazis says. “They are the most popular way our guests enjoy breakfast sandwiches.” (Personally, I prefer a Croissan’wich.)

“A preoccupation with authenticity all too often masks privilege and power,” explains Rachel Hopkin, a radio producer and folklorist who has written several papers on the lore of the croissant. “In the case of croissants, this privilege could involve having the resources to go chasing around France in search of the best croissant, or study at a top pâtisserie school, or get imported ingredients, or say what is authentic and what is not.” But the reality is that our personal relationships to croissants are what make them croissants.

“It comes down to the quality. Is it well made or is it not?” Chevallier says. “People have found various ways to reach that goal. How much do you care that what you’re eating in 2020 is not the same thing you’d be eating in 1920?”