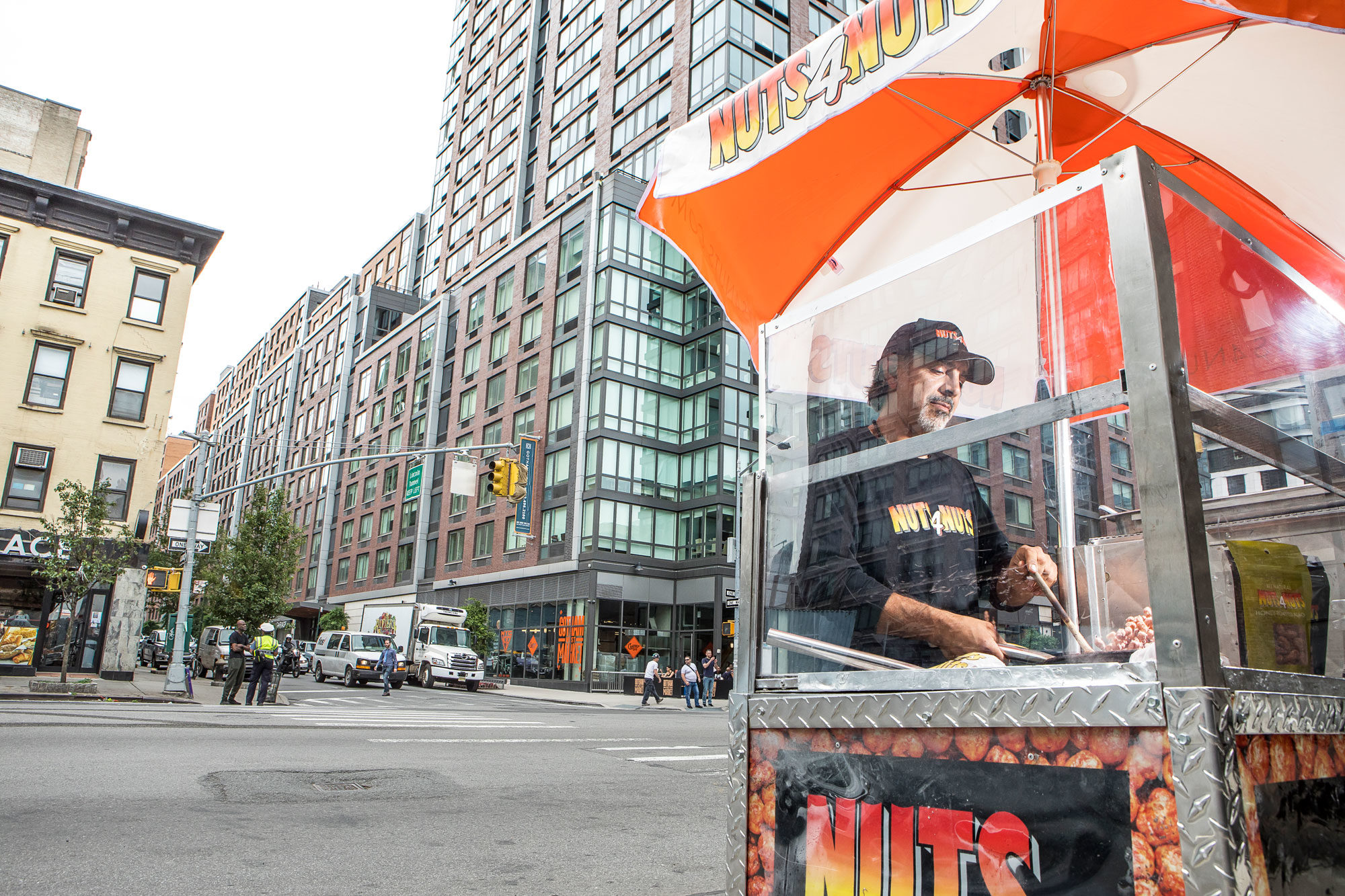 The story of how a pushcart selling sweet snacks became as important to the fabric of New York’s streets as hot dog carts.

About as far west as one can walk in midtown Manhattan without hitting water, in a nondescript parking lot connected to a warehouse, live all the elements needed to make one of the city’s greatest snacking treasures. Every day, Nuts 4 Nuts vendors come to this space to collect shiny silver carts, orange umbrellas, gallon jugs of water, and packages of nuts, sugar, and powdered honey. They’ll set up on corners and in parks around the city, boil the ingredients in copper pans until the mixture caramelizes, creating a cloud of toasty, sugary air, beckoning passersby. The crunchy mixture is doled out into waxy bags sealed with twisted edges, like warm French pastries.

“I saw that people were connected to this product. I saw its potential,” Alejandro Rad, co-owner of Nuts 4 Nuts, tells me about the company’s founding. Rad, who goes by Alex, owns the company with his business partner, Cliff Stanton. And like so many New York stories, he started from the ground up.

In the early 1990s, Rad came to New York from Mendoza, Argentina, to study at the Spanish-American Institute. He earned money to stay in the States selling then-unbranded candied peanuts (garrapiñada maní) from pushcarts, a technique that came to New York in the 1980s from another Argentinian man, Jorge Aguirre. According to Rad, garrapiñada maní were inspired by the French, who emigrated in large numbers to Argentina throughout the late 19th and early 20th centuries. The French-Argentines, used to making honey-roasted pralines with almonds, began to adapt their recipe for peanuts, which were plentiful in their new country. It also makes for a perfect pushcart food: The recipe is simple, requiring few ingredients, and the smell of them cooking acts as its own marketing. Rad abandoned his plans to transfer to Hunter College and sunk everything into starting his own honey-roasted nuts business. In 1993, he started working for himself under the name NutsAboutNuts but was sued by another company that had already registered the name. The day-to-day business wasn’t particularly calm, either. “Egyptians [cart operators] were running some sort of Mafia on the corners; they were asking for money [for certain cart locations]. So I was trying to ignore as much as possible,” explains Rad. “But at one point I needed to show some strength, so some physical actions took place.” (In a video interview with Vice Munchies, Rad alludes to using the nuts as a weapon against his rivals.) “But then I fit in. They understood that I was a relentless person.”

Stanton, who was also working in the city’s cart business at this time, running a frozen lemonade company, joined forces with Rad following a new rule from mayor Rudy Giuliani’s Department of Health. The rule mandated a one-permit-per-person limit—and while it claimed to prevent businesses from monopolizing the pushcart industry and reduce congestion caused by vendors in the city, it also hurt small-business owners like Rad and Stanton. Still, no matter how hard they struggled, that ubiquitous smell of toasting nuts continued to draw lines of tourists wandering the city and locals looking for a quick snack day after day. Now they own the trademarked name Nuts 4 Nuts, which operates under their company, United Snacks. Nuts 4 Nuts provides ingredients and the pushcarts to about 70 permit-holding vendors every day. The vendors cook the nuts, package them, and sell until they run out of product. For the most part, this setup runs smoothly, but Rad explains that there are constant complications. Numerous new health and zoning codes arise, and when they’re (sometimes accidentally) violated by vendors, it costs hundreds of dollars in fines, which often discourages them from coming back to work. Plus, Giuliani’s permit rule is still crippling vendors—a permit holder who’s worked at a cart for decades and wants to retire cannot transfer their permit to a family member who wants to take over. It must be returned to the city, where a lottery system designates who gets the next available permit.

These inconsistencies within the pushcart model encouraged Rad and Stanton to launch their wholesale and retail business. All the classic honey-roasted nuts that are sold at the carts (peanuts, almonds, cashews, pecans, and cubes of coconut), as well as special-edition spicy honey-roasted pecans and an almond-macadamia nut-and-fruit mix, are available for purchase by the pound on their website. They also recently opened kiosks in the Jacob Javits Center and the Garden State Plaza in New Jersey, plus a storefront near their facility in midtown.

Rad mentions that he’s been contacted by outlets in Ohio and California, even movie theater companies in Mexico, who all want to stock Nuts 4 Nuts. Of course, the larger the quantity of product produced and the further away the nuts are shipped, the greater the challenges: The original honey-roasted nuts technique is all done by hand on the stove. “When we try to make them with a machine, it just becomes completely different,” notes Rad. Plus, they don’t use any preservatives, so the nuts don’t stay fresh as long as other snack foods on the market. When Rad makes a batch of the nuts now, he doesn’t need to measure: “I’ve probably made 50, 60,000 batches over the years.” All the ingredients (water, sugar, nuts, and powdered honey) go into the ripping-hot pan—essentially a copper bowl with a handle—and boil until the water evaporates and the sugar crystalizes, then begins to melt again, tinting the nuts golden. Nuts 4 Nuts uses honey powder instead of liquid, as the consistency is easier to regulate; too much honey and the mixture will become a hard caramel instead of the broken, crispy sugar crystals. Unlike the honey-roasted peanuts you’d buy at a vending machine, this technique coats the nuts thickly with the sugar mixture. The end result is a deeply toasted nut encased in crunchy caramelized sugar. Perhaps even more recognizable than the flavor, though, is the smell. As the nuts cook, the surrounding air is deeply perfumed with the scent of melting sugar and toasting nuts—a welcome surprise, considering most of the city’s odors.

Rad loves his business, but is clearly wary of many aspects of the food industry. Corn is subsidized by the government (lowering prices), he notes, making popcorn a more lucrative business than nuts. He eventually wants to go completely organic and invest in resealable packaging to extend the shelf life of his product. But organic nuts are even more expensive, and zip-top bags cost 79 cents to glassine bags’ penny and a half. He knows customers won’t spend $6 on a small package of nuts, but his margins remain tight. “When we raised the peanuts from one dollar to two, there was a big impact,” he says. “[Before,] people were putting four quarters together. [When the price went up,] we were collecting more money, but the sales dropped. Everybody had a dollar before.” (His pushcarts in New York still sell peanuts for $2; cashews, almonds, and coconut are $3.)

Still, it seems that Rad would never want to do anything else. He knows that the aroma given off by the nuts as they cook has made Nuts 4 Nuts just as much of a tourist attraction as New York pizza, or the city’s popular hot dog and soft pretzel carts. Hundreds of copycat recipes for “NYC cart nuts” exist on the Internet, authors raving about the time they followed the smell to a stand in Times Square and just had to make their own when they returned home. As Rad says to me over and over, whether he’s referencing his favorite customers or a YouTube rapper, “people love Nuts 4 Nuts.”