Get a free recipe
Subscribe
The Future of Ice Cream Is Here, and It’s Vegan
By: Jordan Michelman Photos: Aaron Bernstein

There’s a controversial, utterly modern, and endlessly discussed movement taking place here in the city of Portland, Oregon, where I live. You may have seen it breathlessly depicted in the national media or shared again and again, with infinite commentary, online.

I am, of course, referring to vegan ice cream.

What I’m trying to say is that our cone runneth over. And while plant-based meats may get the lion’s share of the press (not to mention the venture capital), Portland’s blue-sky moment for vegan desserts portends the arrival of a national plant-based food trend ascending the culinary ranks. We are presently living at the dawn of the golden age of vegan desserts, specifically vegan ice cream, and the trend is going mainstream in a big way.

This means home shoppers interested in the alternative milk and sugar lifestyle are spoiled for choice. From olive oil–based “Wildgood” (recently given the NYT treatment) to national shipping star NadaMoo! to gelato-style Nubocha (keto, vegan, and gluten-free). All-world Obama-era food stars like Jeni’s and Van Leeuwen are getting in on the act, shipping vegan riffs overnight to doorsteps across America.

This frankly feels like it means something—a sentiment echoed by no less esteemed a source than David Lebovitz, a blogger, author, and dessert pooh-bah known colloquially as the “high priest” of ice cream. “I do see vegan ice cream as the ‘next frontier,’” Lebovitz tells me. “If you think about ice cream like hot dogs, it’s not about the ‘meat’ but the seasonings and flavorings.” 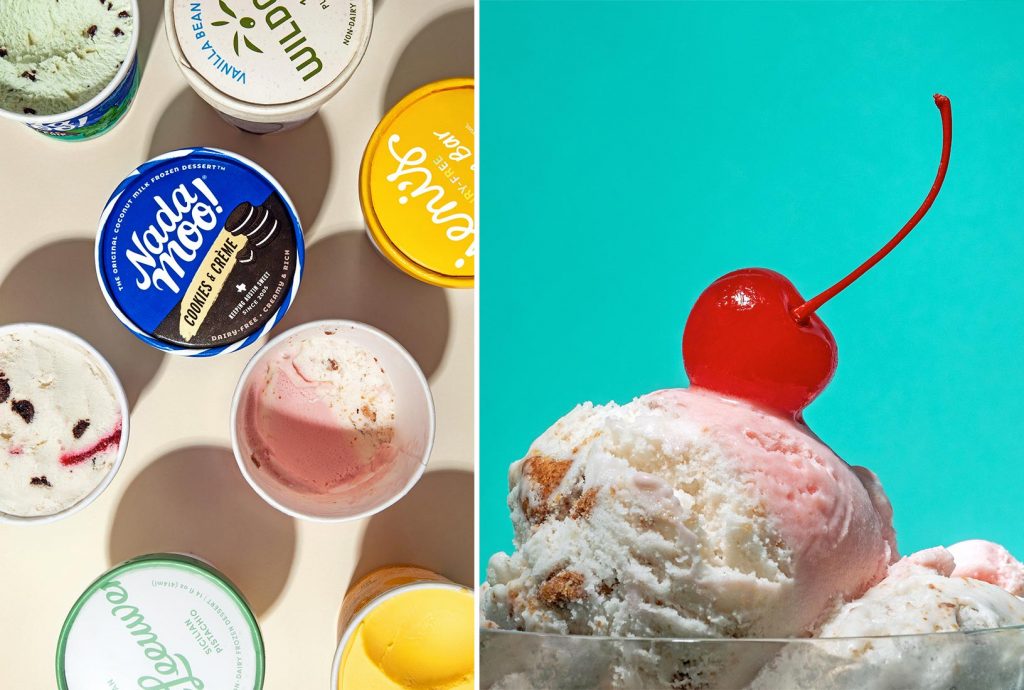 Increasingly these days, you can’t sell ice cream without also selling vegan ice cream, a sea change in style and taste unthinkable even a few short years ago. The growing pervasiveness of frozen vegan dessert options is poised to break through into the American culinary consciousness: the next Beyond Meat burger at every small grocery store will now be found in the dessert aisle. With ubiquity comes innovation and personal expression—and that’s where things get really interesting.

Back here in Portland, an entrepreneur named Rebecca Smith is fusing a broad palate of culinary influences—including her own Native American and Mexican American childhood in the Bay Area—into a thriving vegan paletas brand called, cheekily, Ice Queen. Born as a series of pop-ups, Smith has grown Ice Queen into a busy catering, wholesale, grocery, and retail walk-up window brand with an expanding footprint across the city (including at least one outdoor nail salon, because . . . Portland). “My take on paletas incorporates traditional Mexican flavors with a lot of other things,” she tells me—this week’s special was a pickle popsicle, but the most popular flavor is an oat milk horchata, or “oatchata.”

“If you think about ice cream like hot dogs, it’s not about the “meat” but the seasonings and flavorings.”

The decision to make her dessert brand vegan came naturally to Smith, who is no trend hopper but has been a practicing vegan for the better part of a decade. Her brand, however, is sold in businesses across the city—including taco shops and sushi bars—that branch outside of the traditionally insular vegan-for-vegan food scene. Ice Queen launched in 2018; at that time, “there was really no one doing vegan ice cream or popsicles here in Portland,” Smith recalls. “I wanted to try and be the first.” Now she finds herself sitting in the catbird seat on the edge of a zeitgeist.

“I really think of this as something from everyone,” Smith tells me. “Eating plant-based is becoming so popular, and honestly . . . I think a popsicle or ice cream is easier than a burger. You can’t argue with any kind of milk mixed alongside fruit and sugar. It’s just good.”

Smith’s point is hard to refute. Vegan ice cream, popsicles, and other frozen desserts are growing in popularity because they’re delicious, and by no means is enjoyment restricted to those who strictly follow the all-plant-everything lifestyle. Ice Queen’s smaller-scale (dare we call it “indie”?) approach is bookended by the attention nationally recognized artisan ice cream brands like Jeni’s or Salt & Straw are giving their vegan flavors. Twenty years ago, it didn’t matter if you had a vegan dessert option (what am I, Moby?). Today’s options, like Jeni’s Roasted Peanut Butter & Strawberry Jam, are well and truly no afterthought, creamy and zingy and wonderfully textured. Meanwhile, the online listing for their Texas Sheet Cake flavor is even more blunt: “Forget that this flavor is dairy-free. It’s as good as, if not better than, everything else we make.”

Taken together—the national and the indie, the vegan-dedicated and the forget-we’re-even-vegan stylings—you get something that adds up to an inflection point. Mark it as a moment of precipitous growth for the next wave of culinary veganism. I feel like, soon, we won’t even really differentiate between the vegan and the non—it’ll just be another option, to enjoy if you please, on every sweets menu in America, just as every coffee bar now gladly offers a range of milks, from cow to oat to soy. Lebovitz sees the parallel as well, in lockstep with wider culinary trends. “The popularity of plant milks worldwide, in coffee, for baking, and for other uses, parallels its rise in popularity in the ice cream world,” he tells me, before shouting out a particularly good vegan soft serve enjoyed recently at Daimant Collective in Paris—a city not exactly synonymous with veganism.

I think back to an early Ice Queen pop-up, which I attended along with my four-year-old, who loves popsicles (as any four-year-old should). She doesn’t know what veganism is; she just knows it was a fantastic frozen mango chamoy sherbet on a stick. What I’m saying is, the future of dessert is already here. It happens to be vegan, if you care, and it’s absolutely delicious.