Get a free recipe
Subscribe
The Future Is Flavorless
By: Alison Sinkewicz Illustration: Ellie Skrzat 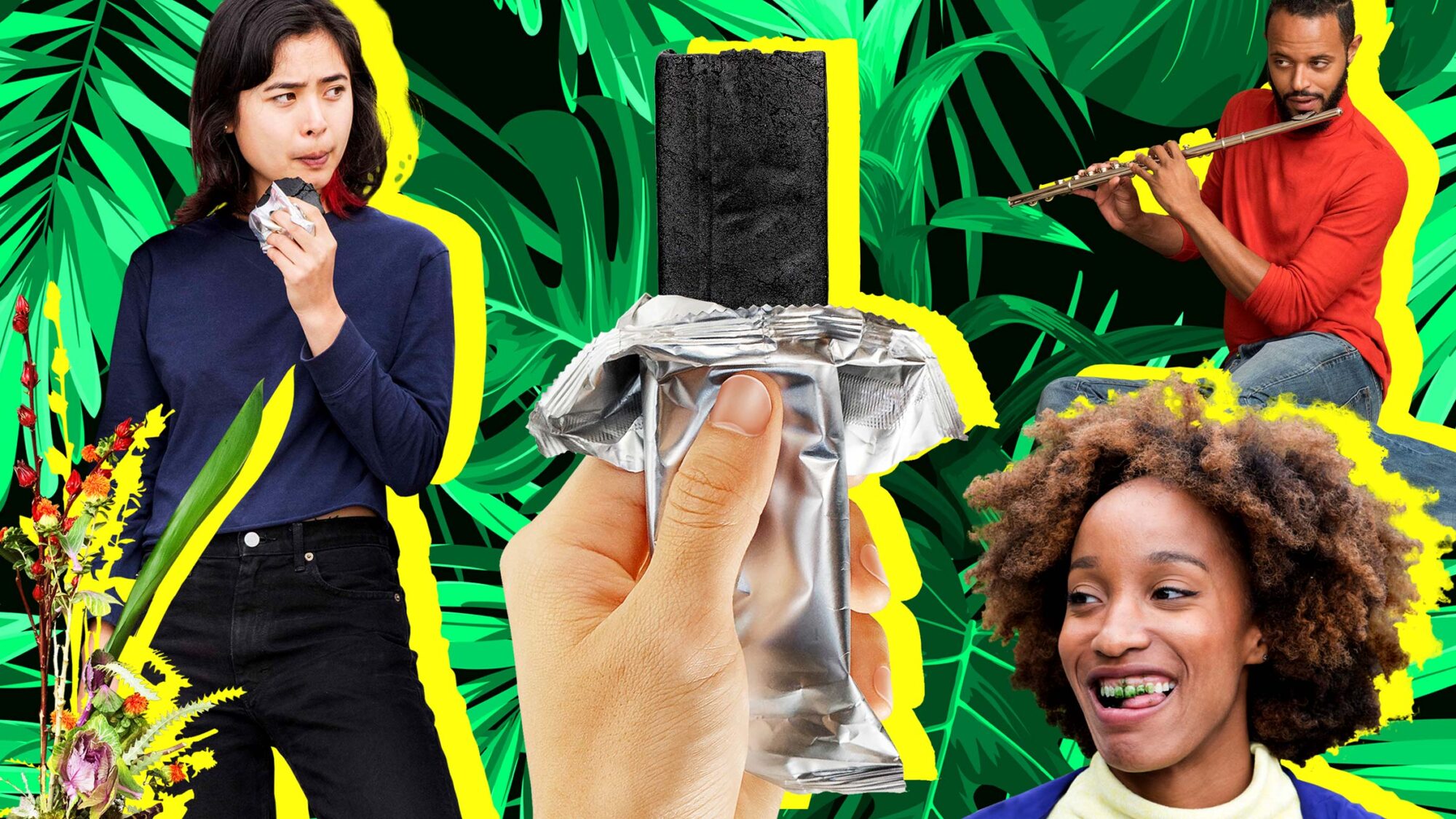 A new creative lab wants to prime your palate for the flavors of the future by rejecting the food of the present.

Soylent once promised to be the food of the future. When the company launched in 2014, its debut product was a creamy white beverage described by its 24-year-old founder, Rob Rhinehart, as “neutral, bland” with a “minimal flavor” that was “broad” and “nonspecific.” This neutrality was deceptively complicated to achieve, given that every ingredient in the drink had an actual taste, from the soy protein to the molybdenum minerals. The drink, which cost $65 for a weekly supply in 2013, purported to be a substitute not just for one-off meals, but for all of the food required to maintain one’s life.

In 2017, the company launched two flavors in addition to Original and the caffeine-infused Coffiest. There was Cacao, a mild chocolate flavor, and Nectar—a puzzling flavor that some consumers described as Fruit Loops cereal milk, while others compared it less enthusiastically to cleaning fluid. Nectar, now discontinued, was created by Soylent flavorist and artist Sean Raspet, and it was closely aligned with the abstract, philosophical aspirations of Original.

The flavor profile of Nectar was partially derived from a synthetic version of Nasonov pheromone, a scent used by bees to communicate with one another by marking flowers that have nectar and announcing their arrival at the hive. Nodding to flavors and scents that occur in nature, while presenting a completely new and artificial taste experience, Nectar was unconcerned with tasting anything like food. The highly conceptual flavor was a sleeper hit at Frieze New York in 2016, where Soylent previewed his research and development prototypes, garnering headlines like, “What the Hell Is Soylent and Why Is Everyone Drinking It at Frieze?”

Raspet was pushing back on the sustainable food trend of retro-utopianism—the concept of regressing to old farming practices and conventions to feed the earth’s booming population.

At Soylent, Raspet was pushing back on the sustainable food trend of retro-utopianism—the concept of regressing to old farming practices and conventions to feed the earth’s booming population. Creating conceptual, non-natural flavors like Nectar was Raspet’s way of acknowledging that it’s too late to return to these quaint customs. He wanted to forge new eating territory, even if it may be at first blush…unappetizing.

Shortly after Soylent’s debut at Frieze, Raspet left the company to partner with writer and researcher Lucy Chinen, cofounding the algae-based food company nonfood. Launched at the end of 2017, the company’s first product is nonbar, an energy bar made of mostly algae, with erythritol sweetener and a blend of natural and artificial flavors to soften the still prevailing, aggressively green taste of the algae. Highly sustainable and nutrient-dense, algae is an excellent source of protein, omega-3s, vitamins, and nutrients—and it uses a minuscule amount of energy to produce on a large scale.

Though nonfood could be mistaken for a net art project—disjointed images of normcore-clad flute players enjoying the algae bars, with images of Björk standing in a field threaded throughout its website and Instagram—nonbar is, in fact, a very real product that is for sale. A box of ten bars is available through the website for $30 USD. Chinen estimates that about 10,000 bars have sold in the past two years, and sales have been on the rise. Raspet notes that nonfood’s model isn’t too different from other businesses, with ambitions to scale up production, but the company has something other than just profits in mind. “I would say the business goals arise from the even more important goal of creating the most environmentally efficient food product that uses the least carbon, water, and land possible,” he says over the phone from nonfood’s headquarters in Michigan. “That’s the real goal, and the business is an avenue toward that.”

It’s a very different tactic from the swell of businesses today that aim to grow meat in a lab, or to create plant-based proteins that bleed like real meat. “They’re all kind of kinetic, a representation or a simulacrum of something that already exists,” Raspet says of meat simulations. “We saw that there’s some value in a different approach. And we kind of had to do that because algae—as a flavor and an ingredient—we can’t really force it into some other mold anyway.”

Chinen and Raspet have focused on showcasing the taste of algae, making it palatable with flavorings and sweetener, but also proposing that it may be worthwhile to embrace the taste of the algae alone.

Instead of trying to offer consumers a hard proxy to a flame-grilled patty, Chinen and Raspet have focused on showcasing the taste of algae, making it palatable with flavorings and sweetener, but also proposing that it may be worthwhile to embrace the taste of the algae alone. “Throughout doing tastings and [releasing] versions of nonbar, [we] realized that [for] people who aren’t exposed to, basically, Asian food, algae is kind of a surprise–and not always in a good way,” Chinen admits. “So it is super important to diversify people’s palates and expand the idea of what is good.” Raspet adds, “A lot of people who try things for the first time—they automatically think it tastes bad, just because it’s new. It’s called food neophobia.”

The question of pleasure, and suppressing it for a greater goal, is often brought up in connection to these futuristic, high-concept foods, and palate diversification offers a comforting assurance that embracing a diversity of flavor can be a form of pleasure. Eating pungent and strong flavors isn’t so much about sucking it up for the good of humanity, but about recognizing the abundance and diversity in a food type like algae. It also motions to a larger cultural challenge to address the racial dynamics of food. Who gets to determine what tastes good?

Nonfood sees itself not as a holistic solution, but as more of an introduction to the coming algae initiation. The traditional, social aspects of preparing food for yourself and others isn’t something nonfood is looking to reject. “Really, the missing element when you start talking about protein bars is, what about home cooking?” Chinen says. “It’s not like we’re trying to deny food. So we started thinking about: How would someone who is interested in the ingredient use algae?”

For many who sprinkle spirulina into their morning smoothie, the idea of incorporating that ingredient by the cup might be unappetizing, but Chinen points to the quality of algae as a significant factor as well. Likening the grading of algae to that of matcha—some for cooking, some for drinking—she notes that there is a wide variety of algae that may not yet be commercially available.

Back at Soylent, things have changed since the days of Nectar. In 2017, Rhinehart departed as CEO and was replaced with food and beverage industry vet Bryan Crowley—the former CMO of Pabst Brewing Company. The company no longer recommends that Soylent be used as a total food replacement, though it notes some of its customers continue to use it this way.

“We’ve had many investors ask us, ‘Well, can’t you just make an algae burger?’”

And Soylent’s approach to flavor development isn’t nearly as radical as it used to be. A Mint Chocolate Chip drink is now part of the mix, as well as a selection of chewable bars in approachable flavors like Chocolate Brownie, Citrus Berry, and Salted Caramel. It’s become less of a replacement for food, and more of a convenience item in the era of the gig economy (Soylent recently partnered with Lyft)—a higher-minded Clif Bar, if you will.

“Eating is a nice break in your day, and something that people may look forward to,” says Julie Daoust, PhD, Soylent’s vice president of product development and innovation. “So why not have Soylent deliver on that through a variety of flavors?” It’s an agreeable statement, but a pretty significant backpedal from the times when the company’s founder declared in a blog post that “food is the fossil fuel of human energy.”

It’s perhaps nonfood’s unsentimental approach to food systems that makes it such an interesting endeavor. There are no grandiose man-made solutions to be found in nonbar. There’s no promise that it will taste like the bake-sale cupcake of your elementary days, nor that it will bleed like an animal when you cut it. It will taste like green algae.

“We’ve had many investors ask us, ‘Well, can’t you just make an algae burger?’” says Chinen.

“The burger is sort of arbitrary,” adds Raspet. “They’ve been around for generations, but it’s not like they’ve been here since the beginning of time. At some point, they were a new invention. We think maybe a lot of the great foods that will exist haven’t been invented yet. Maybe some of the delicious and popular foods of the future need to be invented, and to do that, you have to experiment.”

Alison Sinkewicz is a Montréal-based writer. Her work has appeared in Wallpaper*, Dwell, Food52, Bomb Magazine, Pitchfork, and elsewhere. Her ongoing series for Canadian Art is an in-depth look at those affected by Vancouver's property crisis and how it conditions cultural production and dialogue.