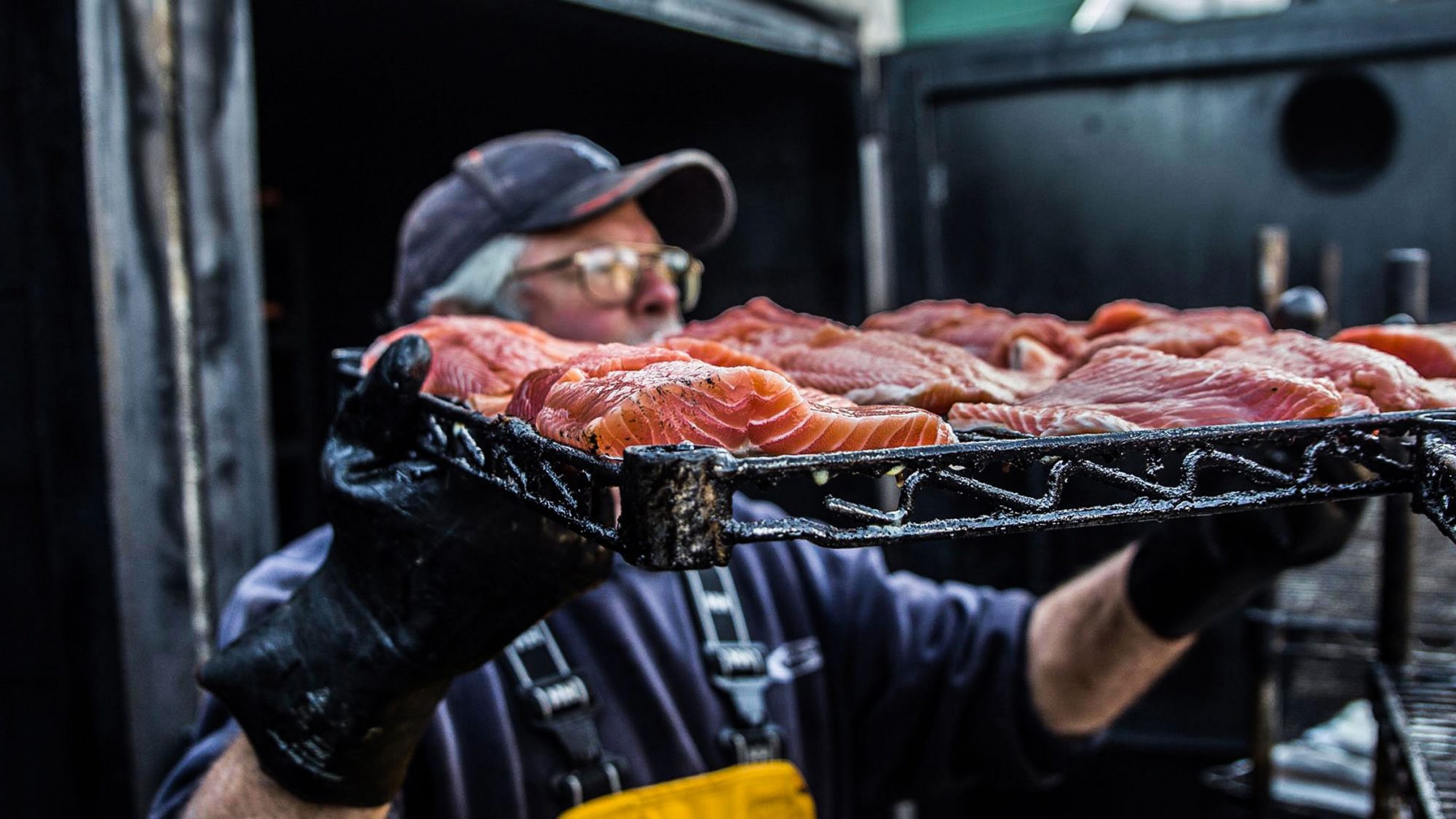 Smoked white fish salad is an unlikely union of Scandinavian, Jewish, and Indigenous foodways of the Great Lakes.

At first glance, you might not peg Northern Michigan as a destination for killer smoked whitefish salad—best eaten, in these parts, as a spread atop water crackers or crusty French bread and washed down with a case of Short’s beer. But in this forested region hugging Lake Michigan and Lake Huron that (roughly) comprises the fingertips of the mitten, smoked fish spread is as ubiquitous as taxidermied deer busts and towering sugar maple trees.

We’d been in the Little Traverse Bay tourist haven of Petoskey for all of four minutes when we set the GPS to Toski Sands Market and promptly bought a pint of the good stuff. Creamy, salty, and richly smoky, punctuated with scallions and briny capers, it was the first of two tubs of smoked whitefish spread I bought there in less than a week. But it was far from the last version we’d see touted proudly on signs in front of shops and restaurants throughout the area.

“We make it constantly,” says Nels Carlson, fifth-generation owner of Carlson’s Fishery in Fishtown on the Leelanau Peninsula. The processor sells around a hundred pounds per day in summer, and the process is in constant motion—from lake to cleaning table to saltwater brine, whitefish and lake trout spend four hours in a low smoker before getting flaked and mixed with cream cheese, lemon, garlic powder, and heavy cream. “It’s so simple but, man, people absolutely love it.”

Carlson’s opened in 1904 but only started selling smoked fish spread for retail in the 1960s, when tourism overtook a hobbled commercial fishing industry and forced small fisheries to add retail products to stay viable. (Retail now accounts for a majority of Carlson’s business.) The fact that Carlson’s version contains half lake trout sourced from tribal fisheries owes to a preference for its moist, fattier flesh, but also necessity, as fish stocks have shrunk. Since indigenous tribes first secured fishing rights as part of the consent treaties giving up their lands to settlers, they’ve slowly regained sovereignty over what little commercial fishing remains here.

“It’s not surprising that, with this huge boom in local food obsessiveness and dependence on tourism, these kinds of surf-to-turf approaches are informing commercial fishing people as fishery sources decline horrendously,” says Janet Gilmore, professor emeritus at the University of Wisconsin-Madison, who specializes in folklore and maritime cultures.

Indeed, in many ways, this salty spread is a microcosm of the region’s historical and cultural geography—connecting its disparate groups through a universal attraction to this fish with its ample, buttery flesh.

When French settlers came to the Upper Peninsula (UP) in the 1700s, the vast wilderness surrounded by three Great Lakes was populated by nomadic groups, mostly from Chippewa and Menominee indigenous tribes. Generations before fish processors’ smokehouses beckoned locals with wafting aromas, indigenous tribes dried fish over fires (imparting that same blessed smoke) and packed them into fish-skin pouches to subsist on through winter and trade within their vast networks, including a growing cohort of French and, later, English settlers.

The Carlsons emigrated from Norway to the then-shipping hub of North Manitou Island in the mid-1800s, where they sold lumber to ships and grew produce to sell to the ships’ cooks before relocating to Fishtown, where they started fishing. They were part of a wave of some 400,000 foreign immigrants who came to Michigan between 1860 and 1900.

Indeed, that smoked fish dip also bears striking similarity to the Jewish deli whitefish salad is no coincidence; Ashkenazi Jews who settled in Detroit during those decades sought whitefish for its kosher designation, especially during the fall high holidays, when it’s harvested.

This salty spread is a microcosm of the region’s historical and cultural geography.

“For over a hundred years, to cater to the markets for Jewish customers in big urban centers like Chicago, Detroit, and New York, where most Jewish people settled, commercial fishermen made sure that they had whitefish and roe available for Rosh Hashanah and Yom Kippur,” says Gilmore, who spent time interviewing commercial fishermen around the UP’s Garden Peninsula. “They coordinated with truckers who’d take the fish to those various markets, and with rabbis who’d fly in each year to inspect the processing areas.”

Detroit had a profound influence on everyone within the boundaries of Michigan, as Gilmore points out. “For work, a lot of people from way up north would come down to Detroit and Flint and then go back up later in life.”

By the time the state’s first real commercial fishing law was enacted in 1929, commercial fishermen numbered in the tens of thousands. Decades of overfishing species like sturgeon and surging invasive species forced the industry to consolidate and streamline. These days, Carlson’s owns one of just 50 remaining commercial fishing licenses issued statewide over the four Great Lakes touching the state (not including tribal fisheries)—of which only a fraction harvest fish each year.

Tribe-licensed commercial fishing began in the 1970s as a way for the state, tribes, and the federal government to establish how to allocate the lakes’ commercial resources going forward. The effort was massively helped by a 1985 consent decree issued by the Michigan District Court that increased the number of tribal licenses, but it wasn’t until recently that more genuine coordination took root, Gilmore notes.

Walking along Fishtown’s historic docks, among weathered fishing shanties and swaying boats, you can still discern its roots as a bustling commercial fishing hub, even though, these days, it’s largely a tourist town. Yet one aromatic constant remains for those who call this place home—some of whom have been coming to Carlson’s for 60 years and now bring their grandkids.

“People who live blocks away will come ready to buy and say, ‘I could smell the smokers going yesterday,”’ Carlson says. “Man, it smells so good.”