Get a free recipe
Subscribe
The Exceptionalism of the French Yogurt Aisle
By: Natalie Rinn 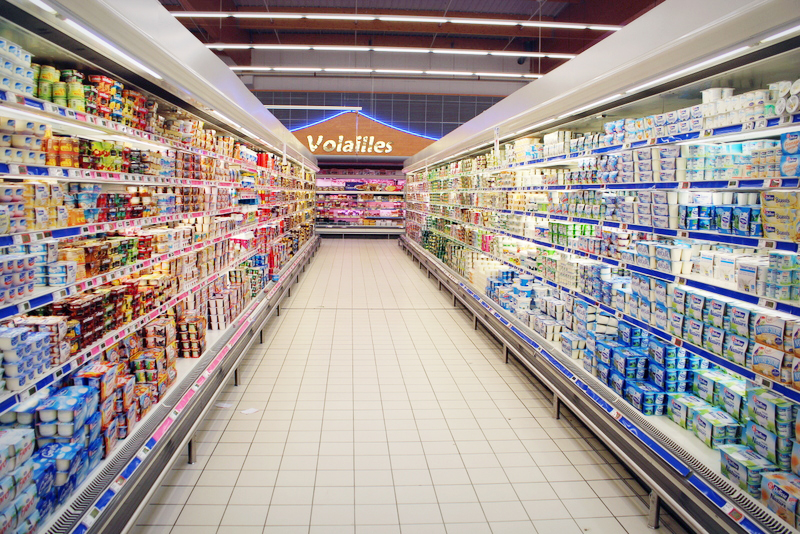 Picture Willy Wonka’s namesake factory, but filled instead with an intense variety of fermented dairy products. Welcome to the yogurt aisle in France. C’est bon! There are plain yogurts anchored with fresh fruit, riddled with nibs of chocolate, and lined with bases of caramel and chestnut puree. There are desserts lactés, which contain additional sugar and eggs and take the form of chocolate cake, tiramisu, creme brûlée, or clafoutis. There are organic yogurts, sheep and goat milk yogurts, and nondairy yogurts. There are mass-produced yogurts and yogurts made in small batches on family farms. But regardless of what you choose, the texture is always silky and notably lighter than the protein-packed Greek yogurts preferred by Americans.

I discovered all of this more than a decade ago, when I taught English conversation to teenagers in a small town in northern France. Ever since, I’ve dreamed of going back, mostly to hang out in the yogurt aisle.

While I’m not one to question a good thing, I at some point found myself wondering why yogurt is such an intrinsic part of French life. It’s true that France is Europe’s second-largest dairy producer after Germany, but that doesn’t explain the pull of yogurt specifically—the United States, after all, produces far more dairy than France, but we’ve always bowed to milk, not yogurt. And while the Germans consume more fermented dairy products than the French, their yogurt aisles are—I’m sorry—just not as fabulous. So I decided to do some research.

First, some statistics. In 2016, France consumed 19.6 kilograms of yogurt per capita, or 43.2 pounds. That number is expected to increase to 43.9 pounds this year—which is, incidentally, the equivalent of four bowling balls. Comparatively, over the course of the same year, Americans ate 13.7 pounds per capita. The majority of the French population eats at least one serving of yogurt daily, and one third consume five servings weekly, starting from infancy. In the U.S., meanwhile, only 6 percent of us eat yogurt every day.

This discrepancy isn’t lost on the French. “All the French who live abroad can adjust to everything but yogurt,” says Jacqueline Dubois, a Paris-based writer for the French culture blog My French Life. One of her sons, who is 26, lives in England. “‘Oh, my God,’” she recalls him telling her. “’In England, that’s what I miss, the French yogurt. I don’t know what to eat.’”

Yogurt has had a few centuries to gain a foothold in French culture: It first made a splash in France back in 1542, when King Francois I suffered a stomach bug that doctors could not cure. The sultan of the Ottoman Empire (where yogurt is said to have been discovered in the third millennium B.C, by goatherds who preserved milk by fermenting it in sheepskin) was friendly with the throne and sent the king a doctor who cured him—with yogurt. News of this miracle food subsequently spread.

In the early 20th century, science stepped in to explain the miracle. First, a medical student in Bulgaria isolated a bacteria native to his country’s yogurt called Lactobacillus, which was not naturally present in the human intestinal tract. Using this research, a scientist at the Institute Pasteur in Paris linked the same bacteria to longevity in Bulgarian peasants. In the French imagination, yogurt became tied indelibly to health, and thus a culture of already sensible eaters pledged their devotion to it.

In the 20th century, two of the world’s largest multinational yogurt companies appeared in France: Danone, which was founded in Spain in 1919 before relocating to Paris a decade later; and Yoplait, conjoined in 1965 by the French dairy coops Yola and Coplait. Conveniently, the company’s formation coincided with the advent of TV—and television advertising—in French homes.

Victoire Louapre can still describe a commercial for Danone’s Activia (called Bio at the time) that played in the late ’90s when she was a kid. “There was a teenager that had a tummyache, and the person was saying, ‘Have a Bio de Danone and everything will be better,’” says Louapre, who now lives in Los Angeles, where she writes for the French restaurant-review blog Le Fooding. “It put in people’s brains that yogurt was like medicine and relieves you from stress.” What’s more, doctors are even known to recommend yogurt for the stomach flu. “We thought yogurt was something we couldn’t live without,” Louapre says.

Still, I wondered: Health benefits and effective advertising aside, was there something else, something more intrinsically quotidian, that explained yogurt’s outsize presence in French culture? For Louapre, it’s tied to what she calls “French home culture” and the continued ritual of the three-meal day. “Very often you will have a salad, main course, and dessert,” she says. “We always finish with dessert, but [my family] would finish with fruit or yogurt. It seems like the healthy alternative to a heavier dessert.”

For her part, Dubois pinpoints something even broader. “We have this obsession of balance in general,” she says. “That’s how I was brought up, and I think I passed it on to my sons.” Meal hours themselves are unchanging, and there is no snacking outside the home. But even within this regimen, yogurt has its place. Morning, noon, or night, it fits all appetites and (rarely) breaks the rules. It is a food that improves but never steals the show—until, that is, you end up in the yogurt aisle.

Natalie is a native Minnesotan, freelance writer and editor, and former executive editor of Brooklyn Magazine. She holds a master's degree in journalism and French studies from NYU. Recently, she relocated to Los Angeles from New York to experience running in a non-humid climate, and to tackle adventure (food and non-food related) up and down the California coast.