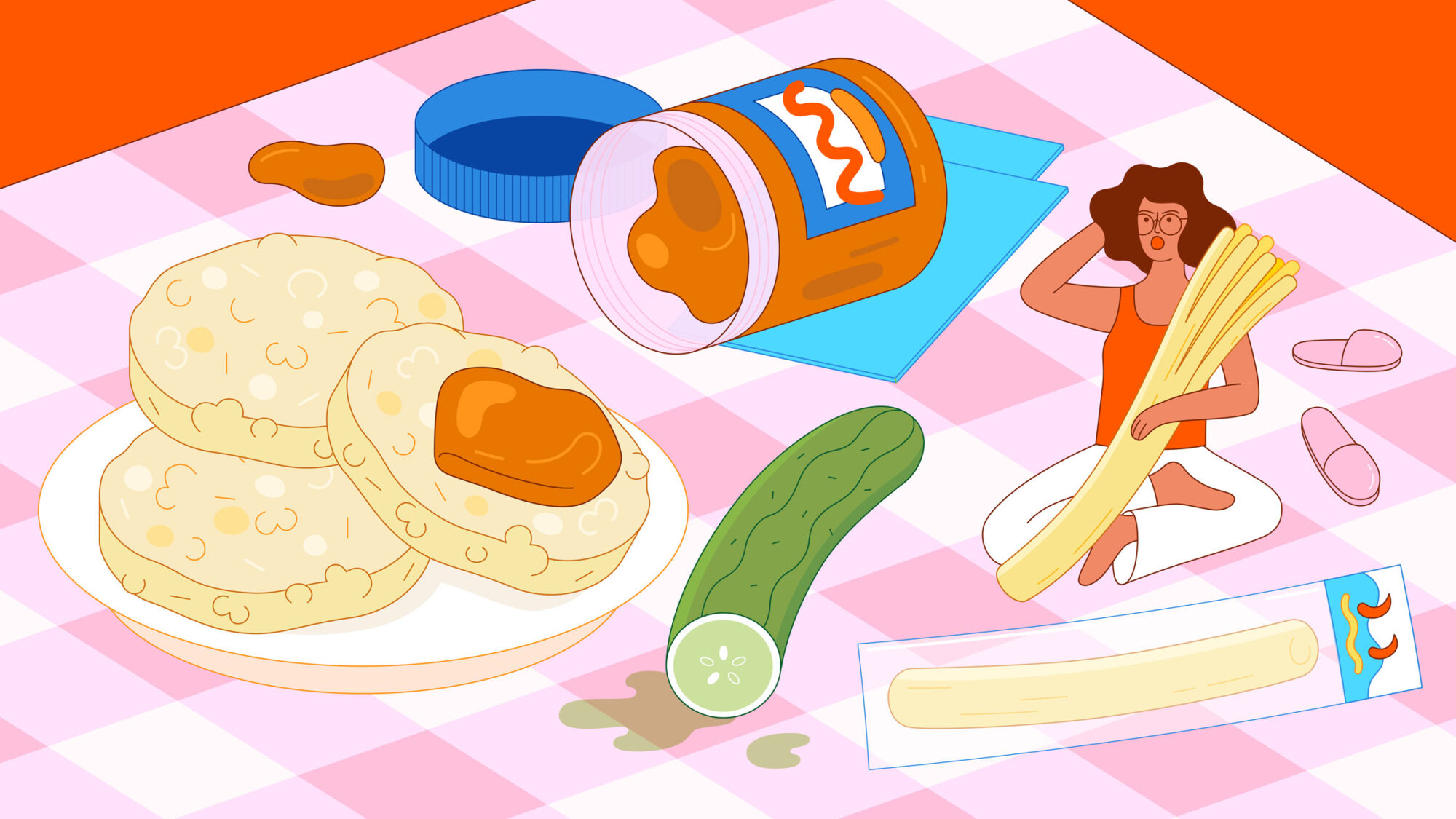 Editors, authors, and TASTE contributors tell us about their most phoned-in meals of the past seven months.

They’re grotesque. They’re rarely captured on camera. They often appear under cover of night and disappear almost as soon as they’ve appeared. I’m not talking about Bigfoot or the Loch Ness Monster. I’m talking about the meals we all make for ourselves when we’re exhausted, hungry, out of groceries, and utterly sick of cooking.

The past seven months of home cooking have brought about revelations, breakthroughs, and wildly ambitious projects—many with remarkably positive outcomes. But this period has also made cooking arduous and repetitive at times. When you’re used to stopping by your favorite slice shop or picking up deli sandwiches between meetings, pivoting to preparing three meals a day for your household (or yourself) can be a serious wake-up call. It’s a reminder that cooking isn’t always fun—it’s sometimes just about getting food on the table.

We’ve all coped with this in different ways. Ina Garten has been leaning on peanut butter and jelly sandwiches. TASTE contributor Max Falkowitz has fully embraced a mode of eating during this time that he describes as “raccooning,” or “scrounging through the muck of your life in search of treasure,” as he wrote in The Counter. One day this summer, my lunch was just a single plain hot dog on a plate, eaten while producing something between a laugh and a whimper.

TASTE founding editor Matt Rodbard has had a few meals that consisted of honey wheat pretzel twists dipped in mayonnaise (he insists that this “recipe” only works with Duke’s or Hellman’s). Our director of audience development, Kaitlin Bray, recently mixed some leftover chili and shredded cheddar cheese into some sour cream and sold it to herself as a “dip.” Assistant editor Tatiana Bautista has been avoiding the onerous task of salad-making for months now by eating handfuls of prewashed greens between sandwich bites.

Curious to know what our friends and contributors cook when they’re at the end of their rope (and when Instagram isn’t watching), we asked some of them to share a few of these moments from the past few months. For every photo of a belabored loaf of home-baked bread you see out there, someone’s skipping the baking and reaching for a box of Triscuits.

Laurie Ellen Pellicano, recipe developer and food stylist: Saltine and butter sandwiches. They were a favorite of mine when I was a kid, and they still hold up. Would recommend.

Emily Timberlake, editor and TASTE contributor: A friend of mine described adulthood as “a carnival of bodily disaster.” So, naturally, 2020 was the year I turned 35, and the year I learned that my seemingly undiagnosable chronic illness was linked to a depressing array of new food allergies: gluten, dairy, and soy, among others. I’ve basically become a non-consenting practitioner of the Whole30 lifestyle—forced to eat virtuously, even though I’d really rather not. It’s annoying because it’s very hard to cook lazily. But I do eat a lot of random stuff on corn tortillas! Even the tiniest scraps of leftovers: a bit of salad, some green beans, a smear of avocado. I wish I could get weirder, but it’s the best I can do under the circumstances.

Jenn de la Vega, former TASTE Cook In Residence: I was very lucky to be testing someone’s cookbook all summer, but that meant eight to ten hours on my feet. There was a recipe that called for soft-boiled eggs to be stuffed into a torchon, and I didn’t use all of them. I rummaged through my “show floor drawer” (sample products that I picked up from expos when they were a thing, and leftovers from photo shoots or events). I found a pack of Inés Rosales tortas, a Spanish cracker the size of a pita. Soft-boiled egg, some chives, and pepper. Might have dozed off on the couch shortly after.

Aaron Hutcherson, TASTE contributor: I’ve had a few charcuterie boards and my fair share of peanut butter and jelly sandwiches, but my laziest “meal” by far was definitely the time I just ate a bag of carrots at my desk for lunch.

Max Falkowitz, TASTE contributor: Been making this kinda-gross, kinda-awesome lil burrito of roti from Patel Brothers warmed on the gas burner, then wrapped around a spot of ghee and some smushed preserved walnuts in syrup, which becomes this fatty, dark-spiced nutrition bomb when I forget to eat all day. And then sometimes I make a second, and that’s food for the day! Preserved walnuts, though—love them.

Jaya Saxena, Eater staff writer: So many of my meals have ultimately been just scrounging. I’ve definitely had lunch that was two pieces of string cheese, a pickle, and a rice cake with peanut butter stretched over two hours. But, mostly, my partner and I have been relying on a few recipes to use up all the CSA vegetables we get every week. We have lots of frittatas and stir-fries, and we’ve made a ton of the Smitten Kitchen zucchini quesadillas, because CSAs mostly serve to inundate you with pounds upon pounds of squash.

Daniel Holzman, chef and TASTE contributor: Cheese and crackers have been my de facto dinner of choice. It started with the excuse of cracker recipe testing for a project and morphed into pure laziness.

Priya Krishna, TASTE columnist: Rice and microwaved frozen vegetables topped with chile crisp or sambal. If I am too lazy to make rice, I toast a piece of bread. Or: a smoothie made of all the frozen fruit and dairy in our fridge.

Cathy Erway, TASTE columnist: I never get bored of making some kind of noodles with an egg and whatever else is in the fridge. But I went through a phase of open-faced sandwiches with random smörgås on top—things like pan-fried baby eggplant from my CSA with pickles, tomatoes, and hummus, and usually one with peanut butter, cucumbers, and hot sauce. The latter combo is something that my husband picked up while living in the Netherlands—it’s really good! Oh, and I use Frank’s RedHot sauce for this, but I guess you can use any kind of hot sauce, too.

Bettina Makalintal, VICE food and culture writer: The fire-roasted tomato and olive oil Triscuits are one of my favorite foods in the whole world, and though I’ve long known I could finish a box pretty quickly, I didn’t actually treat it as a meal until recently. Now, though, I can confirm: A box of Triscuit is a meal—no need for cheese or anything else on the side.

Melissa Clark, New York Times staff writer: I usually managed to get a reasonable dinner on the table, mostly because I have a child who is old enough to notice if I didn’t. And by reasonable, I mean throwing a few sausages in the broiler and making a salad (actually, the kid makes the salad, but sausage broiling is all me, and my husband takes care of wine duties). To round it out, I serve condiments—kimchi (which counts as a vegetable), mustard for more zing, and ketchup (which also might count as a vegetable . . .).

Lunches were the most neglected meal. The kid got cheddar cheese cubes, whole wheat pretzels (healthy!), and a sliced cucumber pretty regularly. Not sure what hubby did—probably crackers and almond butter. And cottage cheese with chile sauce was my standard. Sometimes I put pineapple or peaches in, too.

Lesley Téllez, TASTE contributor: I feel like all I’m doing lately is phoning it in. My kids are five and two, and they’re wary of everything except ketchup. Yesterday was burned fish sticks and mac and cheese, with ketchup for the “vegetable.” (We go through so much ketchup lately that I’m actually astonished.) I do feel a responsibility (Maybe misguided? Is this rooted in patriarchy?) to feed them something nutritious, so I haven’t gotten to pretzels-for-dinner territory yet. But mountains of PBJ sandwiches, for sure.