Get a free recipe
Subscribe
The Curry Powder Has Left the Curry
By: Mahira Rivers Photo: Jenny Huang 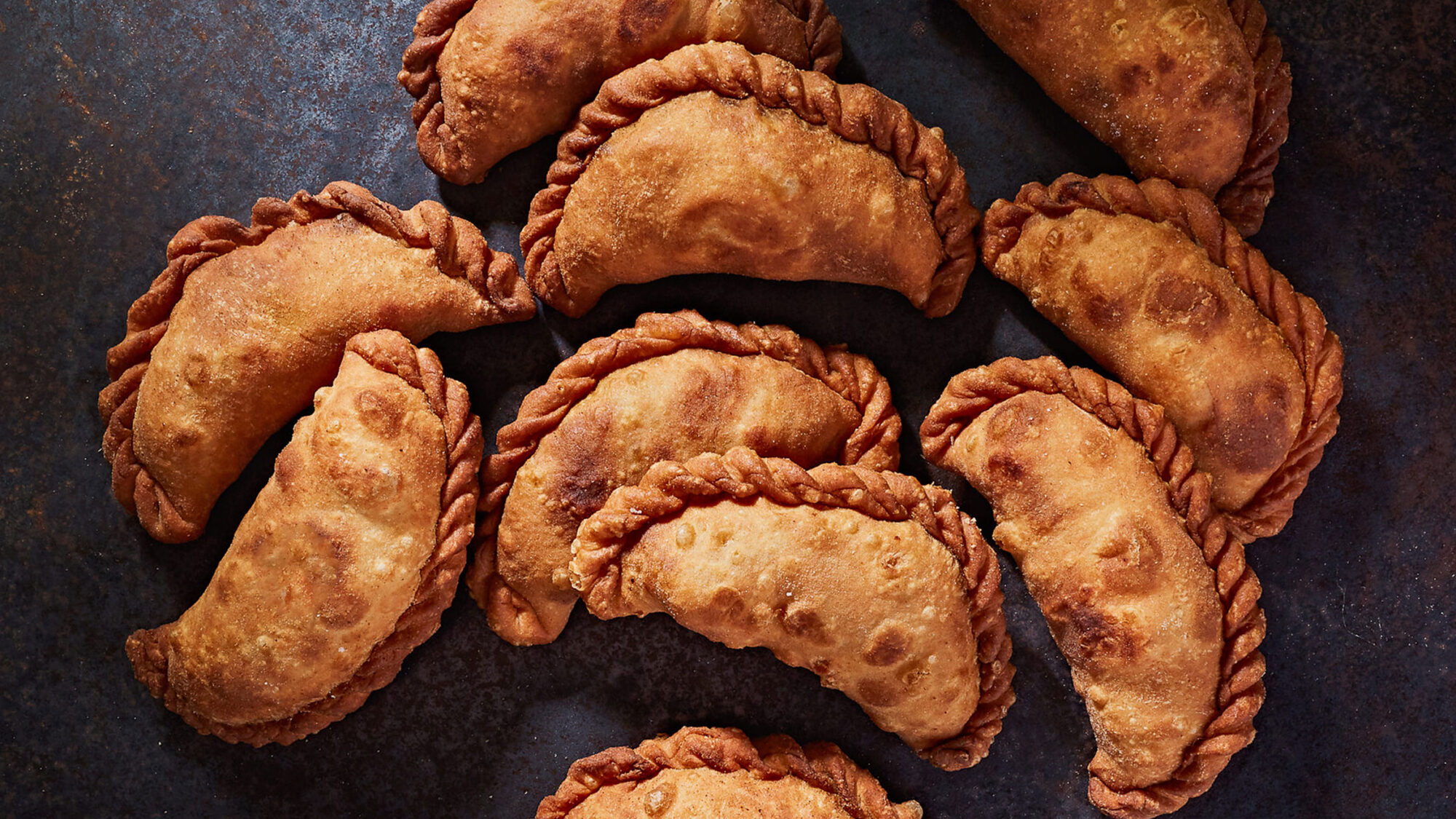 The spice blend has moved past its monolithic, colonialist origins and into Hong Kong teahouses, German hot dog stands, and Trinidadian roti shops.

You start with popping hot oil in a pan, a heap of sliced onions, and perhaps some minced garlic. When the eye-watering sharpness morphs into a sweet and steamy sweat, tip in some curry powder, and wait for the musky fragrance to hit. This is more or less the start of thousands (more likely millions) of recipes for “curry” across the world—that singular yet elastic mélange of heat and spice. In Vietnam, it might be cà ri gà. In South Africa, it might be bunny chow, served in bowls of bread. On the islands of Trinidad and Tobago, stewed channa in doubles, ladled over two supple baras, begins this way.

The defining ingredient at the heart of each of these recipes is curry powder, a vague spice mix typically characterized by its golden turmeric hue, sweetly astringent aromas of coriander and fenugreek, and varying degrees of heat. More often than not, it’s a packaged blend that is sold literally everywhere—in fact, finding a grocer that doesn’t stock it is probably much harder than finding one that does, no matter where in the world you are.

Despite its ubiquity, curry powder comes with some baggage: Its prevalence is a direct result of colonialism, after all. The geographic overlap of the British Empire with curry powder usage is a biting reminder of an oppressive colonial past. It’s also true that curry powder has been used as shorthand to define all South Asian curries, which is an offensive oversimplification of an extremely diverse, regionally varied dish.

In the 1970s, Indian cookbook writer Madhur Jaffrey famously shunned curry powder in her book An Invitation to Indian Cookery. Jaffrey’s pushback set the tone for the ingredient in Western food media, even though curry powder was, and continues to be, an essential ingredient for an ethnically Indian diaspora around the world. It’s status as a premixed, mass-produced, wan blend further cemented its tepid reputation and, in some cases, repudiation among the from-scratch cooking set, even as its wide availability is precisely why curry powder has permeated so many cuisines. Though its history is unquestionably fraught, there’s an equally important, and often overlooked, story of curry powder’s assimilation and adaptation into cuisines worldwide.

Despite its ubiquity, curry powder comes with some baggage: Its prevalence is a direct result of colonialism, after all.

In their earliest days, even British recipes for curry did not endorse a one-size-fits-all curry powder. There were specific blends used for specific dishes called masalas—distinct combinations of toasted and ground spices that complemented different ingredients. But as the popularity of Indian-style food grew across the colonial empire from the late 1700s onward, the East India Company, a powerful trading company, met that demand with an affordable convenience product that aspired to mimic the masalas of one of its greatest ports: Madras (modern-day Chennai, in the southern state of Tamil Nadu).

This Madras-inspired blend became the version of curry powder to proliferate throughout the world. When the slave trade was outlawed in the 1830s, the British sent more than a million Indian indentured servants to work on plantations and infrastructure projects in its colonies, from Indonesia to Guyana. In these East and West Indies, curry, the dish, was the abstraction of an entire food culture that was left behind. Curry powder, the ingredient, became the convenient and affordable approximation of its taste.

Coriander, turmeric, fenugreek, and some kind of pepper are the base of nearly every Madrasi-style blend. India’s Sun Brand, established in 1876, adds salt, cumin, and fennel, among other spices. To the west, in the Caribbean islands, like Trinidad and Tobago or Jamaica, chile powder is kept to a minimum, supplemented instead with fresh chiles. Moving east to Vietnam, Hong Kong, and Japan, five-spice powder and dried citrus peel make an appearance; the potency of sweet fenugreek and earthy cumin is replaced by the hum of a dozen spices. In Thailand or Indonesia, dried galangal replaces ginger. And in French vadouvan, the blend inspired by France’s colonial port in Pondicherry, the main ingredient is usually dried shallot or garlic, for a characteristic sweetness.

Food writer and chef Leigh-Ann Martin grew up eating curries made with curry powder in Trinidad, where nearly half the population has Indian roots. “We take our curries very seriously,” she said. “And that includes using the curry powder.” At a pop-up dinner she cooked last year in New Jersey, she served a dish called “Curry Powder and Coconut Milk” to draw attention to the ingredient’s significance in Trinidadian cuisine. She uses the Chief brand, a Trinidadian blend made primarily of coriander, turmeric, cumin, and fenugreek, with a hint of salty-sweet fennel. “We will curry anything,” Martin added.

Indeed, with curry powder, you can curry anything in a single shake. At some point, curry powder jumped the curry and became a seasoning for everything from Jamaican patties to West African jollof rice to potatoes stuffed into flaky puff pastry throughout Southeast Asia. Beyond the diaspora, curry powder has popped up in German currywurst, as the piquant flavoring in ketchup that accompanies a juicy sausage; as curried herring, a staple of a Scandinavian smörgåsbord; and in country captain chicken from the American South.

Irani, who was born and raised in the Indian state of Maharashtra, summarizes a contemporary South Asian perspective: “What is curry powder but just another masala?”

In some cases, the adoption of curry powder was more a result of its proximity to the English diet than anything else. After British traders introduced the ingredient to Japan in the late 1800s, the Japanese military began serving a version of Madrasi-inspired curry as a show of Westernized progressiveness to entice young Japanese recruits. Today, kare raisu is a national comfort food eaten weekly in households across Japan, according to research by S&B Foods, the largest seller of curry powder in Japan. Namiko Chen writes the popular Japanese cooking site Just One Cookbook, which hosts several recipes for Japanese curry that call for either store-bought bricks brimming with spices or a from-scratch curry powder blend. “Because of the popularity of curry rice, the Japanese are accustomed to the flavor of curry,” Chen wrote in an email. “The flavor became part of the culture.”

In Hong Kong, a British colony for over 100 years, curry powder is synonymous with dishes like stir-fried Singapore noodles and springy fish balls on a stick, a popular street snack. The local success of the ingredient was similarly due to its British association. Ryan Wong is the chef and owner of a Hong Kong–style cha chaan teng, or teahouse, called Needle in Los Angeles. He serves a beef curry inspired by a stall on Temple Street in Kowloon, made with the same store-bought Chinese curry powder his mother used. In this blend, a local riff on the Madrasi style, cinnamon, star anise, clove, and ginger tame the earthier notes of cumin and fenugreek. “It’s hard to fine-tune all the nuances of each spice,” said Wong. “You can make it yourself, but it’s so accessible and easy to buy off the shelf.”

Meherwan Irani is a modern-day spice trader based in Asheville, North Carolina. He sells a version of Madras curry powder under his Spicewalla brand. Irani, who was born and raised in the Indian state of Maharashtra, summarizes a contemporary South Asian perspective: “What is curry powder but just another masala?” In this context, the ingredient is a shortcut to a particular style and flavor of Southern Indian cooking, or at least some reference to it. “My masala collection would be incomplete without a curry powder, because it represents a region and a culture and a story,” Irani says.

In an age when premixed spice blends are sometimes cast as lesser-quality, industrialized holdovers from past generations (I’m looking at you, Italian seasoning), it may be tempting to write curry powder off as just another way to cut corners. But the truth remains: If curry and curry powder can evoke nostalgia, and even pride, from Sweden to Japan, as Irani put it, “Culturally, we’re way more intertwined than we’d like to pretend.” And that is something to celebrate.