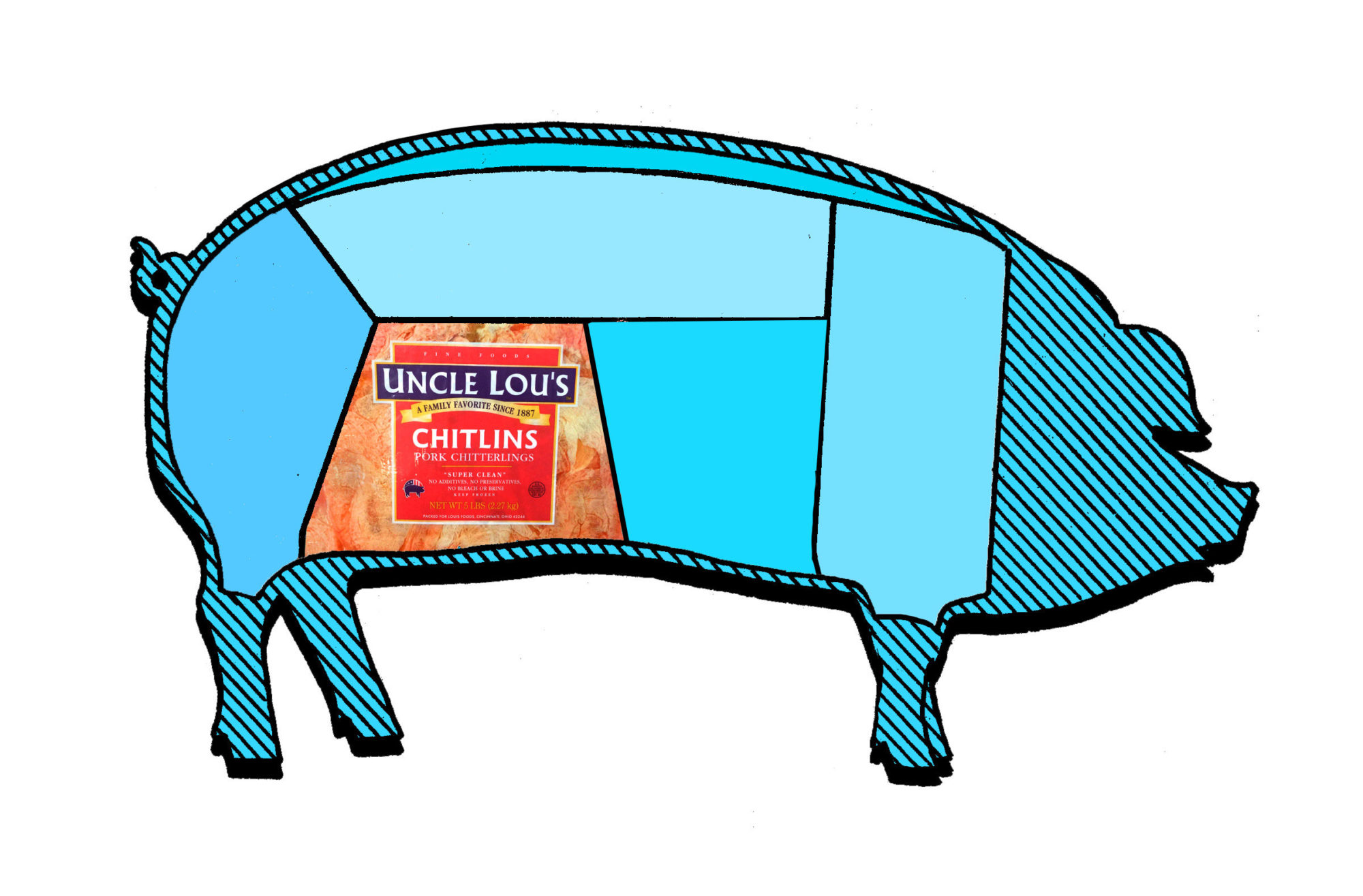 For some black families, chitlins are essential. For a younger generation, the polarizing dish is a dirty trick.

That’s how my boyfriend describes over a decade of eating chitlins, something he promptly stopped doing at the age of 12. That was when it finally occurred to him to ask his family what, exactly, he had been eating all these years.

“My mama and my grandmama started to chuckle,” he says. “My mama said, ‘That’s the pig guts. The pig intestines.’ My grandmama said, ‘You’ve been eating them all these years. You’ll be fine.’ But no—I was done.”

The first time I spent Thanksgiving with my boyfriend’s family, there were groaning tables of food in virtually every room of the house, rendering egress routes impossible. As I wove through the overwhelming buffet, his mama asked, “Did you get some chitlins?”

I hadn’t. I had to admit to her there and then that I had never eaten them before. I’m a biracial woman born and raised in Minnesota, and my Norwegian great-grandmother set the table with oyster stew on the holiday table, not collards. And definitely no chitlins, simmered in a Crock-Pot into a pale, heady stew. I put on my very best poker face and said I was game.

“Why,” she asks, “are we comfortable eating a place where poop was?”

Chitterlings (also known as chitlins) are both a peasant food and a delicacy the world over, like menudo in Mexico and andouillette in France. But regardless of whether you have eaten, will eat, or patently refuse to eat the small intestines of a pig, the dish is heavily associated with African-American culture, thanks in large part to the legacy of slavery: Pig intestines were given to African slaves after their masters had eaten “high on the hog,” a phrase that came directly from the idea that the “higher” part of the pig’s body you were eating from, the better off you were economically.

“They didn’t want all that stuff—the intestines, the cow stomach, [so they gave it to us],” recalls Maudessa Rich-Harris, my boyfriend’s mother. For her part, she grew up loving chitlins, even if she hated the arduous (and admittedly stinky) process of cleaning refuse out of them.

“The conversation was around the smell,” says Kimberly Barnes, host of the black vegan podcast Do Fries Come With That Convo? She says chitlins were such a constant on her family’s holiday table that she doesn’t remember ever having any sort of conversation about them, except when it came to their distinctive odor.

Even so, Barnes calls the dish a “delicacy.” Her family still eats chitlins, but not because they’re a symbol or an homage to the past; they simply like to eat them. “It tastes good to them,” she says. “We don’t eat food that doesn’t taste good.” For the uninitiated, raw chitterlings can be a tough sell.

While Barnes is one of many black eaters who refuse chitlins, many others staunchly defend them.

“Either we embrace soul food or we don’t,” says Jametta Raspberry, the founder of the Minneapolis-based culinary collective House of Gristle. “You can’t pick and choose.”

And, she continues, “maybe you should go ask a white person how they feel about their ancestors giving these parts to us, while they kept all of the other parts to themselves? No one will want to answer that.”

Still, she wonders why people continue to eat them when they don’t have to for survival. “Why,” she asks, “are we comfortable eating a place where poop was?”

Talk to black people of a certain generation, such as Shauna Anderson, a Maryland-based entrepreneur known as the Chitlin Queen, and they’ll tell you: It’s because chitlins are beloved. “Nothing can take their place,” says Anderson, who once ran a chitlin-cleaning operation in Hyattsville that brought in a half million dollars a year. “Not a man, not a woman, nothing. When you want chitlins, you have to have them.” Chitlins, Anderson says, are one of the few things that bind black people together in America. That said, after years of business, Anderson filed a lawsuit claiming that local government agencies were trying to prevent her from opening a chitlins restaurant because it didn’t fit with their idea of acceptable local development. Though her case was dismissed, Anderson’s ordeal can be viewed as a racialization of chitlins: It’s a black thing, and thus inherently viewed with suspicion and disdain—never mind that most of meat-eating America continues to blithely consume chitlins. Intestines, after all, are used widely in natural-casing sausages.

Chef Elle Simone is best known for her on-air role at America’s Test Kitchen, along with her networking organization She Chef. Born and raised in Detroit, she grew up in a family whose holiday table always featured chitlins. But she, too, eschewed them—except for the time she ate some by accident, off of someone else’s plate.

Still, Simone says if she were to open a restaurant, she’d consider putting them on a menu—just as some younger black chefs, such as Edouardo Jordan of Seattle’s JuneBaby, have done. “The food would really pay homage to my family and be true to the way I grew up,” she explains. “Black food culture is about to have a crazy upswing in about five minutes. [How do we] tell this exclusive story? Chitlins is one of those ways. I always tell white people, when you’re black, you don’t really belong to Africa or America. We can’t really call either of these places home. It’s very hard to find an identity,” she says.

Love them or hate them, chitlins are one of the touchstones we get to grasp as our very own.

Does it offend my boyfriend’s mama when her kids turn their nose up at them?

Mecca Bos is a longtime Twin Cities based food writer and professional chef. She spends her time precariously balancing between the two. Thinking of travel and tacos are hobbies.