Get a free recipe
Subscribe
The Bread Has a Buddhist Spirit
By: Mari Uyehara 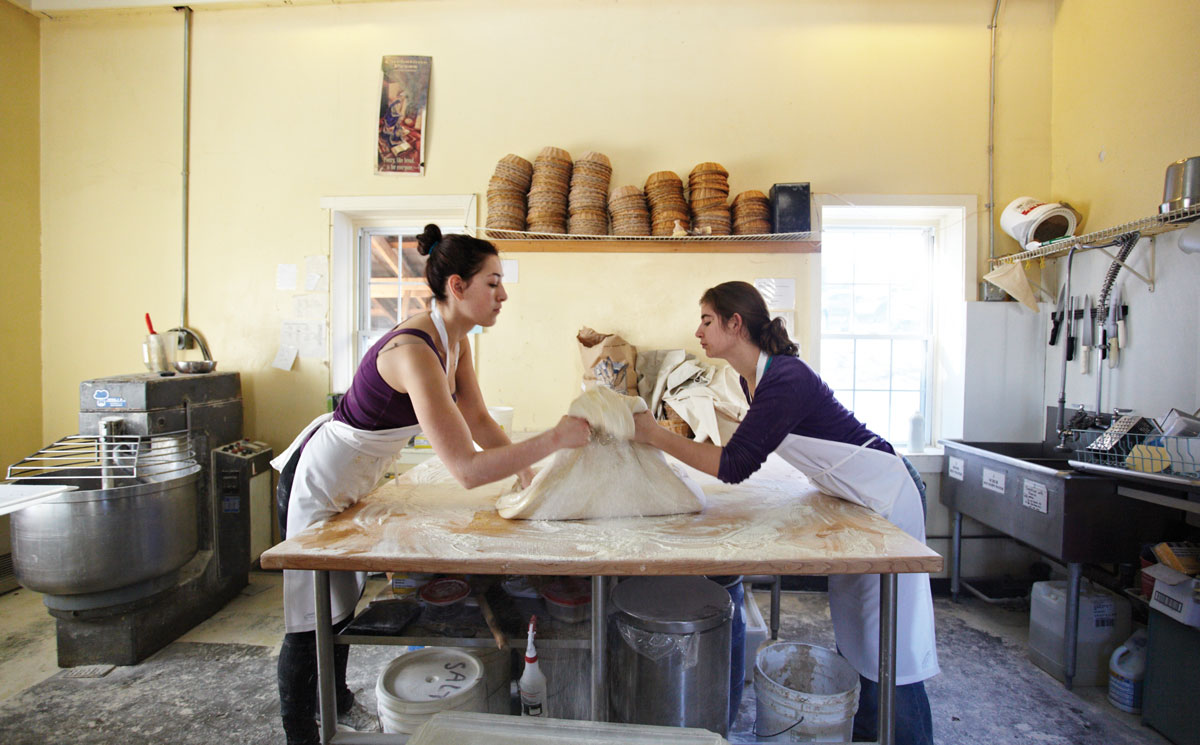 In the past decade or so, I’ve noticed a funny new strain of hippie-dom. During my teenage years, the peace, love, and protest ethos of the anti-establishment generation was watered down to counterculture dress-up in the form of politics-free bong sessions lit by lava lamps and the sounds of our parents’ old Doors records; today it’s nearly been subsumed by the lifestyle marketplace.

In the beautiful faux-bohemian shops of San Francisco and Brooklyn, with $60 candles and $100 all-natural face oils, I’ve flipped through copies of the 1976 DIY cult classic Woodstock Handmade Houses, set out as props for the decidedly un-DIY. On the Lower East Side, I’ve spotted wellness types in pricey designer muumuus paired with Birkenstocks, once known as the preferred comfort footwear for Deadheads. The funky hippie foods of yore—sprouted grains, homemade pickles, tofu—are now turned out in photogenic 57-ingredient bowls in high-design cafes, polished for the style sections in venerated old newspapers. Instead of a reincarnated radicalism of Sixties counterculture, itself, it is Hippie™ the brand, filtered through consumer capitalism, a bizarro reimagining that borrows all of the movement’s aesthetic and none of its anti-materialism.

So it was something of a relief to find a refuge of that old hippie scruffiness back in the corner of Western Massachusetts where I grew up.

The Hungry Ghost Bakery in Northampton, Massachusetts, is not quite like other bakeries, with their lacquered-wood counters, tidy, brightly lit shelving, and spotless floors. Outside, a winding slate pathway leads upward through a garden of tiered herb beds to the front door; the scent of wood smoke and warm yeast permeates the air.

On the front of the building is a hand-painted mural of a fiery sun, a sleepy-eyed moon, and an array of golden wheat stalks amidst bursts of orange and purple flowers. Painted at the bottom of the mural is a fragment of a poem: “we planted wheat / it was so sweet / they felt the heat / up there in the skies.”

The bakery’s name, Hungry Ghost, is a reference to the spirits of insatiable desire in Buddhist theology reimagined as the bakery’s sourdough starter.

Inside the bakery, it is hot and dark. Just past the counter and bread racks is an open work area, where bakers roll out masses of canvas-hued dough on a large, rough-hewn table, fold them, cut them, tuck them into baskets, and eventually push them into a black, wood-fired Llopis oven from Spain that dominates the space. Notes from a Coltrane tune or Cecilia Bartoli opera rumble out from a boom box jammed on a windowsill. It feels as raw as a workshop, the cement floor dusted with flour instead of wood shavings.

On most days, you can see co-owner and baker Jonathan Stevens striding purposefully in the back, his hurried movements driven by a regimented oven schedule, with loaves and boules rotating in and out of the Llopis, the fires below fed by endless cords of wood. Stevens has a tawny beard, a long ponytail, and the defined muscularity of a mountain biker, visible from the white tank top he favors under a loosely tied apron.

Every day, the racks behind the counter are filled with French bâtards and usually eight-grain boules, supplemented by rotating varieties like colonel buckwheat and olive-and-semolina fougasse, a French-style flatbread. A tall glass case on the right features pizzas, and another beneath the L-shaped counter holds pastries, biscuits, and cookies. Stevens’s partner, Cheryl Maffie, is sometimes found at that back table, swiftly and rhythmically portioning dough, and other times overseeing the business side of the operation at a computer in a tiny office tucked between the oven and pizza display. Her softly featured face is framed by soft gray waves of hair and a comforting smile, a hint of her former profession as an early-childhood educator. Funded by bread futures bought by customers and a loan from the bank, the Hungry Ghost opened in 2004 with a smaller oven that could turn out only 60 loaves a day. Stevens and Maffie’s customers know them by their first names and appreciate that they make a point to memorize theirs, too. “It’s not a snooty California bakery,” Nick Williams told me one sunny Saturday morning out in the garden. “Jon isn’t trying to write cookbooks. He’s making bread.” Williams and his wife, Seetla Sistla, who moved here from California when she joined the faculty at Hampshire College, pulled apart croissants and sticky buns while their toddler teetered on the slate garden steps.

It was also Hampshire that first brought Stevens to the area in the early 1980s as a student from Montreal. Many come to the region, which is also home to Smith College, Amherst College, Mt. Holyoke College, and University of Massachusetts Amherst, for academics. Locally, the area is called the Pioneer Valley or, a play on it, the Happy Valley, a wink to its bucolic backdrop and pockets of bleeding-heart liberalism.

The region extends through tracts of land surrounding a bend in the Connecticut River: a patchwork of verdant farmlands, small city centers with low-slung buildings, and modest tree-covered mountain ranges. When the weather is nice, Stevens bikes the ten-mile stretch from his home in the woods, among bears and moose, to the bakery. Black Lives Matter and Feel the Bern bumper stickers are a common sight on Route 9; NPR is the station preset on car radios; and Be a Local Hero canvas totes float amidst the Saturday Amherst farmers’ market. This is where you’ll find the kind of earnest idealism satirized in Portlandia, but also strong public schools and decent health care. It’s Rachel Maddow country, quite literally. She launched her radio career and owns a converted pre–Civil War farmhouse here. Stevens started baking bread and muffins when his main occupation was stay-at-home dad. He turned to the foundational 1970s hippie cookbook The Tassajara Bread Book, written by the first resident cook of a Zen Buddhist retreat center in San Francisco, and first sold bread at his son’s daycare before moving on to CSAs and wholesale, and then finally opening his own retail shop. The bakery’s name, Hungry Ghost, is a reference to the spirits of insatiable desire in Buddhist theology reimagined as the bakery’s sourdough starter that must be fed twice a day. “Making bread is a practice like what people are doing in a retreat,” Stevens says. “Doing something over and over again, trying to improve on it. We’re not Platonist—there’s no such thing as perfect bread.”

The bread at the Hungry Ghost may not be perfect, but it is very good. Every person I spoke to outside the bakery insisted that it is, in fact, the best—better than anything in the Pioneer Valley, or even California or New York City. The loaves have dark, enviable crusts and tangy, springy interiors pocked with what were once air-bubble eruptions in rising dough. One Smith student told me that that her parents in Connecticut requested that she bring bread home for Easter. “Are there no good bakeries in Connecticut?” She shook her head. No, nothing like this. Some customers are bread bakers themselves. Suleiman Mourad, a professor of religion at Smith, made his own before moving to the area 13 years ago from Vermont. While holding a French bâtard sheathed in a brown bag, he gave me a mini lecture on leavening and the perils of enriched flour used in supermarket bread. “We happen to be fans of Cheryl and Jon,” he said. “They foster something beyond bread—a community.”

Stevens and Maffie abide the bleeding-heart principals of the region. In the summer, there are cello concerts and herbalist talks in their garden. They pay workers a living wage and donate leftover bread to local nonprofits. “We’ve both sacrificed bottom line,” says Maffie matter-of-factly. They also brought local grain back to the Pioneer Valley, which was the country’s bread basket before agricultural behemoths centralized wheat-growing in the Midwest. “All the knowledge left the area after World War II,” Maffie says. Farmers in the area no longer knew which of the thousands of strains of wheat were best suited to the climate, nor how to grow them. Restarting grain-growing in Western Massachusetts would be expensive—there were the start-up costs for harvesting, milling, and storage, and most farms didn’t have that kind of capital at the ready. But the pair finally convinced Four Star Farms in Northfield to invest in it, and within five years, they were using mostly locally grown grain; today Hungry Ghost gets 300 pounds every week from the farm. The base of almost all the breads made at the Hungry Ghost is essentially the same recipe in terms of hydration, salt, and the sourdough culture of wild yeast and lactobacillus; a bit of hungry ghost goes into each loaf. Even a couple ingredients—say, rosemary or a different wheat variety—can change much. “It’s like going on a long journey and setting the compass a few degrees more in one direction,” says Stevens. “You end up in a totally different place.” The bakers work the dough in a series of folds to, as Maffie puts it, “create a matrix, an order out of the chaos of gluten strands.” Then it is fermented for 24 hours, the natural leavening breaks down the phytic acids, and the flavor develops slowly. “It’s easier on the gut,” one of their many well-informed customers tells me. If you don’t get to the bakery early enough, there will be slim pickings left of the 150 to 500 loaves made each day.

New customers are sometimes confused to find there is no seating and that the place is dusted up with flour, and rude ones on their cell phones are surprised that they are not served until they can offer their full attention. “We joke around that we’re not in the service business,” says Stevens of the humble space. “American life is so removed from actual production.” Not at the Hungry Ghost, though. There you can find something not so easily seen in other bakeries: a glimpse of the life of bread.

Stevens insists that his bread is a craft and a practice, not art meant for a pedestal, but he can’t but help speaking of bread in spiritual terms that aren’t all that out of place in the Happy Valley. “It has a life of its own; it has a dream life when we go home,” Stevens says of the dough. He tells me that that the bread’s journey doesn’t end when it is made or sold. “Every one of these loaves is floating out on a paper boat.”