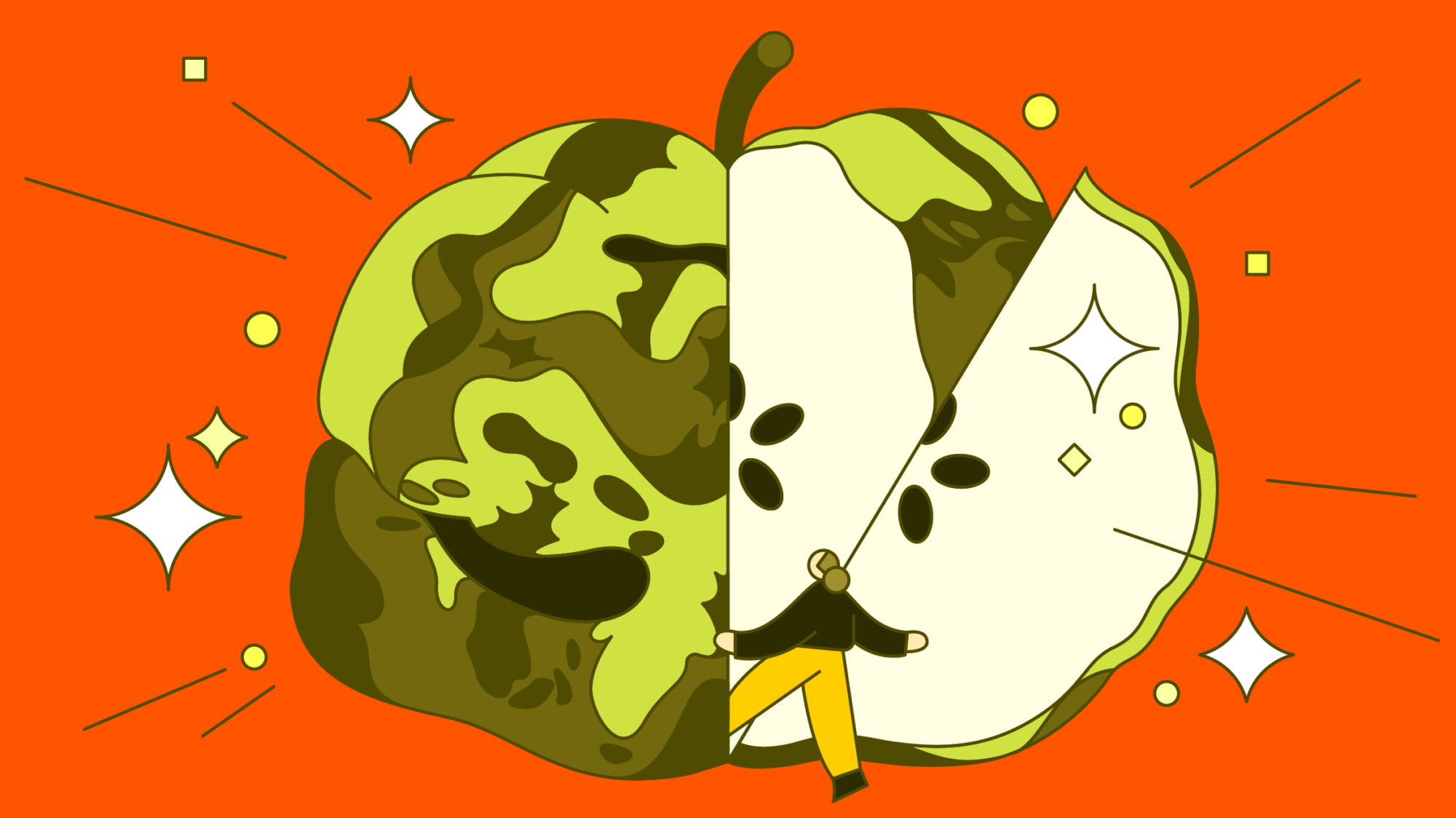 When I hold the Sheep’s Nose apple in my hand, it feels like a gnarled and arthritic fist. I bite into its hard, lumpy knuckles. It’s not too sweet, like a mellowed-out Honeycrisp, and the flesh is foamy and juicy. This is an apple that is extremely fun to eat. I Google “sheep nose” to compare the animal with the apple, which has the elongated shape of an apple in a funhouse mirror. A sheep’s face, I realize, is mostly composed of a long schnoz. I’m charmed, and I’m already nostalgic for it. When will I ever eat one of these again?

Sheep’s Nose apples don’t have the farmers’ market fandom of the superstar Honeycrisp. I can’t find them near me in Michigan; this one was plopped into my tote bag by a friend in Norfolk, Connecticut, before I boarded a plane home. (It was a nice complement to a mini bag of SunChips—thanks, Delta.)

However, if you look hard enough—and cross a few state lines—there’s a world of lumpy, delicious heirloom apples waiting for their moment of extremely niche fame. Finding and tasting these obscure apples will take everything you’ve come to expect from an apple and toss it out the window. Soon you’ll be seeking out rough, brown-skinned fruit that look like old rocks because they taste incredible. You’ll learn how to spell “Ashmead’s Kernel,” and then you’ll evangelize about them. And maybe, just maybe, after a few years of stalking orchards every fall, you’ll run into a few in the grocery store.

It was at a grocery store that NYC-based artist William Mullan, known as @pomme_queen on Instagram, was tempted by a potato. Well, it looked like one, but it was in fact an Egremont Russet apple. This was a British specialty grocery store, and it was a British varietal. “The name felt self-important for an apple,” said Mullan, who was a hairdresser’s assistant and a lifeguard at the time. He bit into one on his way home from the store. “It blew me away with this nutty flavor, dense texture, and aromatic acidity that reminded me of citrus. The epitome of fall.”

Were there more apples like this? He went home and googled “apples,” as one does. He discovered the website Orange Pippin, an apple-tasting note site run by enthusiasts (which doesn’t feel like a strong enough word for it). Egremont Russet, says Orange Pippin, “is a classic English russet apple from the Victorian era. Whilst russet apples have generally fallen out of favour, Egremont Russet remains popular with discerning apple lovers who appreciate its unique flavour and appearance.”

Mullan realized that “the apples we see in the supermarket are the tiniest fraction of what’s there,” he said, adding that he has nothing against the noble Pink Lady. “And I want to taste as many as possible.” 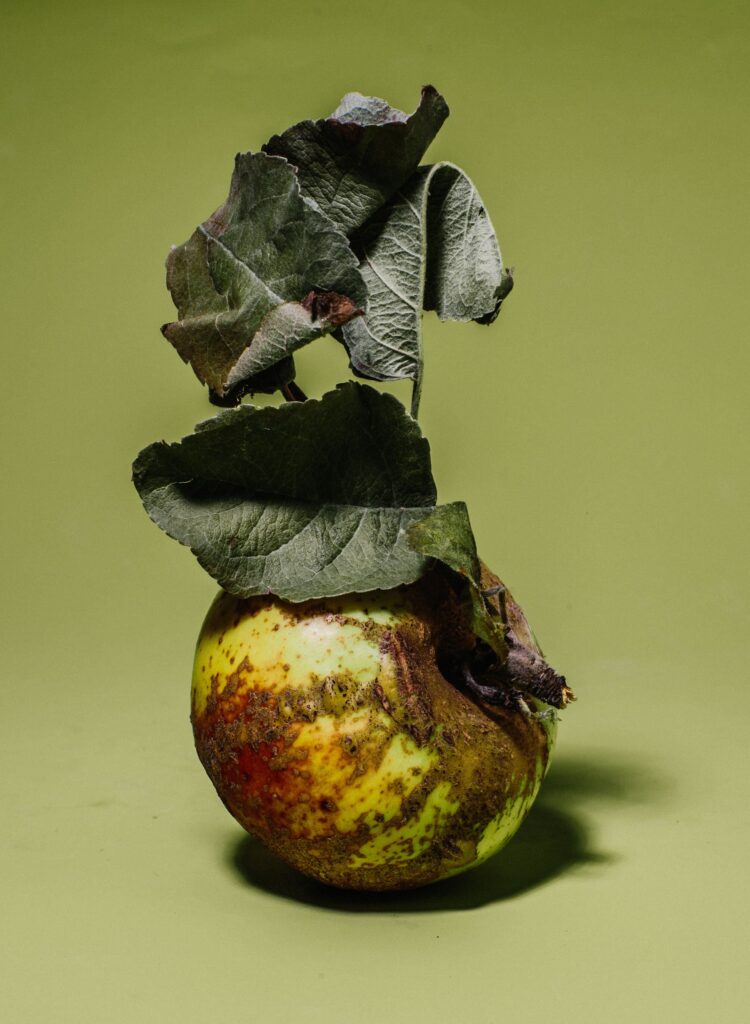 Now the brand director of the bean-to-bar chocolate brand Raaka in Brooklyn, Mullan has a side gig that’s turned him into one of the biggest unintentional marketers for heirloom apples. He takes vivid, striking photographs of them (as well as of grapes, mushrooms, flowers, and slugs), which you can see in his book Odd Apples.

In September, Mullan presented a cultural history of the fruit alongside a tasting of rare apples at Brooklyn’s Museum of Food and Drink (MOFAD). America’s apple industry homogenized and moved away from local sources in the early 1900s, when the advent of cross-country railroads made it possible to send large quantities of fruit across the country. Along with it, the rise of corporate nurseries like Stark Brothers pioneered the marketing of apples by focusing on just a few varieties, beginning with ye olde Red Delicious. (The growth of suburbs and supermarkets sealed the deal.) I grew up thinking there were only red, green, and yellow apples. I was short by at least 7,000 varieties.

At the MOFAD tasting, Mullan brought a rare Knobbed Russet from Scott Farm, an heirloom apple paradise in Dummerston, Vermont. “It looks like a toad, or a burnt piece of wood . . . or a rock,” he said. “It’s got crazy, tree-bark-like dense skin and a citrusy, nutty taste.” Chewing it is a jaw workout. And it was the apple that most guests flocked to try.

“Russeting” is an apple word I hadn’t known. Mullan described it as a “genetic expression when an apple’s top skin layer is damaged by environmental pressure”—say, extreme weather changes—“so the tree responds by sending extra metabolites to the flesh, which concentrates the flavor.” The apple will end up with a “rusty, cracked, dull, and uninviting exterior,” he said, “but the taste is much better, way more complex and concentrated.” And even though the challenging aesthetic may disqualify these apples from a spot in a fine grocery retailer, the real heads know, and the apples sell for around $3 per pound, depending on where you live.

One of the most popular russeted apples is Ashmead’s Kernal. On a foggy morning in October, my partner and I drove down gravel country roads a half hour outside of Ann Arbor, Michigan, to find it at Alber Orchards. We saw trees with clusters of deep burgundy apples so heavy they nearly touched the grass. Those were Arkansas Black apples, which have a rock-hard density that scrapes the roof of your mouth and a flavor reminiscent of brandy.

Inside the farm store, bees were everywhere. They buzzed in the cider donut case and all around the folks waiting in line, who didn’t seem bothered. Co-owner Therese Bossory was also buzzing around, reaching her teal-sweatered arm into apple crates to make a half peck of heirlooms for me. She held up a bulbous, pale-green Calville Blanc d’Hiver and mentioned that the varietal was once grown by Thomas Jefferson.

“Doesn’t it remind you of French furniture?” she asked, and I pictured the apple as a curvy side table in Marie Antoinette’s private chambers. Then she handed me a petite Hudson’s Golden Gem, a russeted apple with golden skin. “Try it!” Its mild flavor reminded me of pear, with an almost lactic and creamy flesh. I adored—and devoured—it. 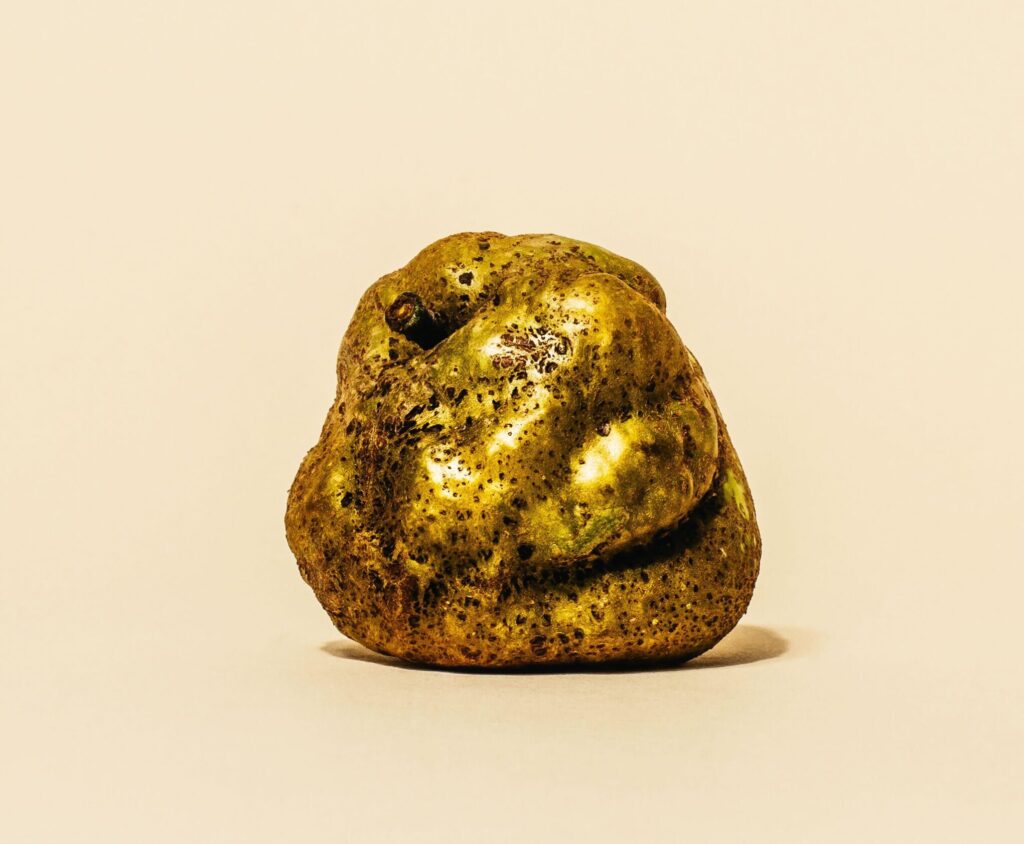 But my prize was Ashmead’s Kernel. It looks like a squat, round rock, its skin completely russeted. Biting into it is like French kissing a cat. The flavor is explosive, perfectly balanced acidic sweetness, with neither hard nor soft flesh. When I asked Mullan which apple he thought had the most potential to take off in a Honeycrisp kind of way, he pointed to Ashmead’s Kernel, and now I’m rooting for it, too. “People need to let go of the idea of what an apple has to look like,” he said. We buy funkadelic heirloom tomatoes, don’t we?

Mullen’s friend Matt Kaminsky, an orchardist, arborist, and cider maker in Hadley, Massachusetts, is an apple lover of a slightly different breed: a wild breed. Kaminsky goes by the name Gnarly Pippins online (“‘Pippin’ is orchard slang for wild apple,” he tells me, “and it’s also used to describe old, fucked-up-looking trees”), where he shares progress from his orchards and musings on pomological theory.

Kaminsky is in search of the next great wild apple—if you have one, please mail it to him. The difference between heirloom and wild apples is that heirloom apples are uncommon varieties (over 50 years old) that have been carefully propagated by orchardists to keep the fruit consistent. In nature, apples are inconsistent and variable, like people. Their offspring don’t always fall close to the tree. Wild apples grow the old-fashioned way: a bird might poop a seedling that grows into a tree alongside the East River or right in your backyard. (Kaminsky’s book, The Wild Apple Forager’s Guide, can show you the way.) They’re completely one of a kind.

Biting into it is like French kissing a cat. The flavor is explosive, perfectly balanced acidic sweetness, with neither hard nor soft flesh.

For the third year, Kaminsky just hosted a pomological exhibition as part of CiderDays, a local celebration in Ashfield, Massachusetts. People from all over North America mailed boxes of their wild apples or pears, which also had to be named (“Death fall pear,” “Smoke stack crab,” and “Bitter donut” were a few of the 154 submissions.) Like an apple beauty pageant, the 200 or so attendees voted on the best apple for eating, the best apple for cider making, the best crabapple, and the best pear.

“Wild apple trees thrive in the margins,” said Kaminsky, “with no human intervention, seeded by themselves, grown with no issues, no fungicide, no pesticides.” His exhibition is a chance to nerd out and show off cool new apples, but it’s also a chance to attempt to propagate the winner into something bigger. What if your wild apple is not only delicious but disease-resistant and good for long storage?

Heirloom apples are an extension of the past, said Mullan, but “these are the apples of the future.”

Alex Beggs is a writer in Ann Arbor, Michigan, where she has a "whole lotta loaves" punchcard at Zingerman's. She's the former senior staff writer at Bon Appétit, and has contributed to The New York Times, Vanity Fair, and others. Her cat, Roger, can't resist roast chicken.