Get a free recipe
Subscribe
It Takes a Village to Cook a Hawaiian Pig
By: Marta Lane Photos: Daniel Lane 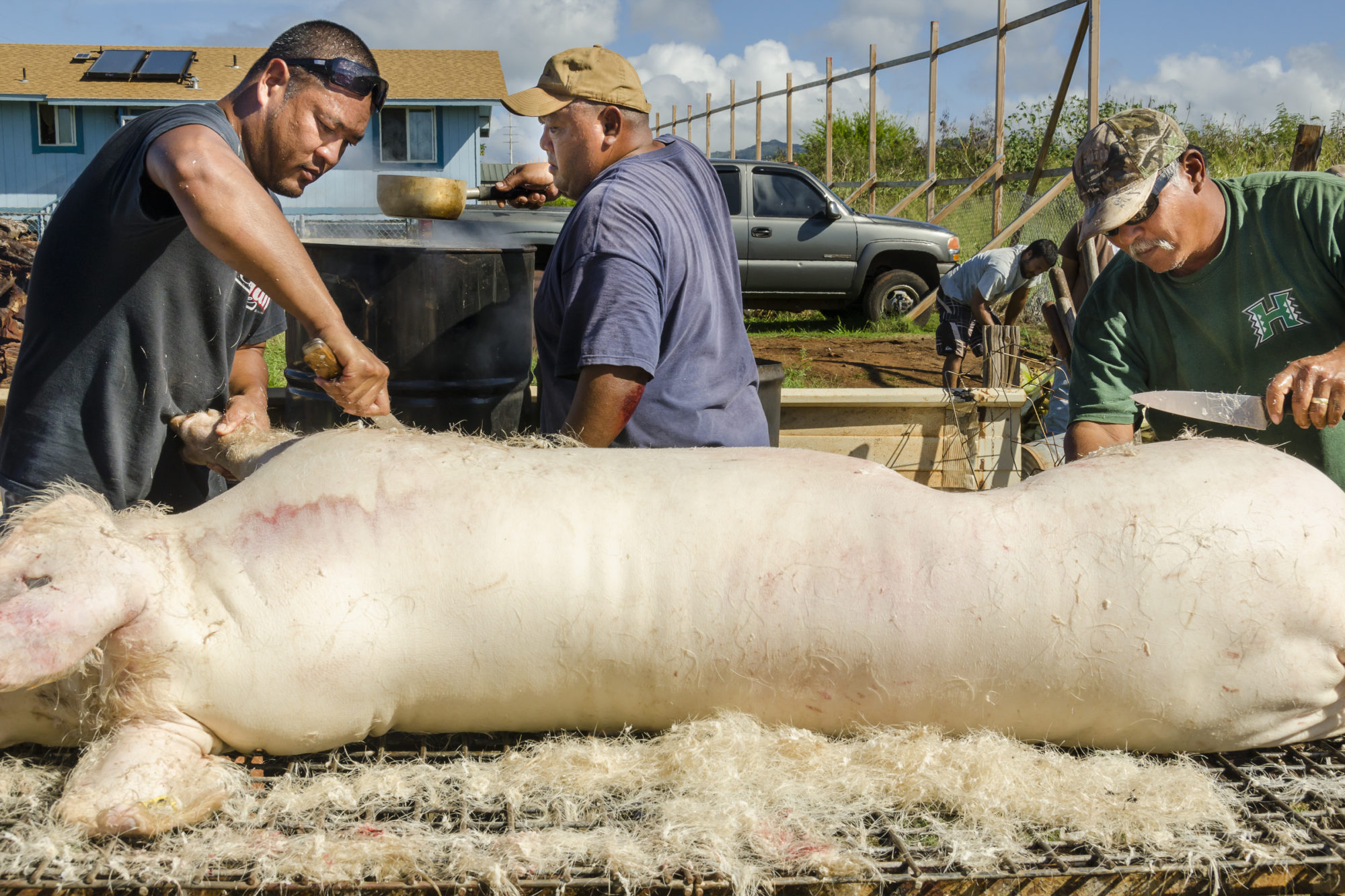 On the Hawaiian island of Kauai, cooking a 300-pound sow involves forklifts, lava stones, and a lot of patience.

Smoke billows from a large dirt patch in Kimo’s backyard, loading the air with a woodsy scent. No fence or trees shelter his plot. This is the hot, dry side of Kauai—near the city of Eleele—and the midday sun blasts the ground. A mound of dirt shelters a pit, its interior stuffed with steaming lava stones that hiss and mesquite logs (kiawe) that sputter.

This underground oven is called an imu, and food that’s cooked in one is called kalua. About 1,500 years ago, Hawaiians used an imu to cook suckling pigs, chickens, breadfruit, sweet potatoes, and taro.

Today, mature hogs are typically cooked in an imu for nightly luaus at the few resorts that dot the island. And even though most Hawaiian residents don’t have an imu pit in their backyard, kalua pig is as natural to Hawaii as rainbows and waterfalls. It’s listed on many restaurant menus and stocked in the grocery store’s frozen section. Kimo’s catering business is old-school and informal. He doesn’t advertise, and there’s no website or social media. Locals either know him or use the “coconut wireless” to find him (Hawaii’s favorite word-of-mouth method of communication). For nearly 20 years, he’s cooked kalua pig for celebrations such as graduations, weddings, and anniversaries. On this sunny afternoon, he will kalua two 300-pound sows from a local named Val. Her family runs a pig farm on the south shore, and she’s gifting her clients with gallon-size bags of kalua pig.

Kimo’s imu is about 12 feet in diameter, four feet deep, and lined with puka rocks the size of basketballs. “Puka” means hole, and the lava rocks Kimo has collected are naturally full of them, which prevents trapped steam from building pressure and exploding. A fire was built on top of them eight hours earlier, with smaller rocks stacked between the wood.

Whack! A guy splits banana tree trunks with an ax. They’ll be added to the fire for moisture and flavor. Eight men cluster around two metal tables. The freshly slaughtered sows stretch between them. Two men singe hair along the pigs’ bodies, filling the air with a bitter smell. Afterward, they use a sharp chef’s knife to shave the burnt hair from the skin until it’s as bald as a baby’s head. Kimo slices the bellies open, reaches inside and scoops out the guts, then gives the carcasses a thorough rinse. On a January evening in 1778, Captain James Cook docked along the Waimea River on Kauai. He and his crew were the first Europeans to meet a thriving community of native Hawaiians. The island was divided into six neighborhoods, called moku, and each moku contained subdivisions called ahupua’a (pronounced ah-hoo-poo-ah-AH). Each ahupua’a, 67 in all, began as a point at the top of a mountain, then fanned into a base along the shore. Altars (ahu) made with the head of a pig (pua’a) marked boundaries.

At Kimo’s, the pigs’ heads are not used to divide property lines, but reserved for soup. Legs, sides, and shoulders are scored deep, and joints are cut so they’ll lay flat in huge metal baskets. A thick layer of sea salt, from the town of Hanapepe, just seven miles up the highway, is spread across the ribs and pushed into gashes.

The pigs are moved to the shade, where a young woman stands over them, fanning flies with a single ti leaf. Men line the baskets with tinfoil and banana leaves and put pig parts inside. With large metal tongs, Kimo pulls small, steaming rocks from the pit and puts them into each seasoned body cavity. Guys drape banana leaves across, then tuck the pigs in with a final layer of tinfoil.

Someone tosses two-foot lengths of banana-tree trunks into the pit, which land with a thud and a sizzle. Kimo climbs into a forklift—before forklifts, an imu was generally reserved for cooking smaller food items, like breadfruit, sweet potatoes, and chicken—and lowers the baskets onto the coals, rocks and steaming banana trunks. Men surround the pit and cover the baskets with a wet canvas tarp, then top that with a thick plastic tarp. Dirt is shoveled around the edges and the plastic tarp inflates with hot air until it resembles a clear dome. The pigs are left like this to cook overnight.

As Kimo and his men unearth the baskets, morning sun crests the Pacific Ocean. Women circle two plastic tables, peeling tinfoil and banana leaves from limp carcasses. Steam carries the scent of roasted meat into the air. The flesh wiggles and jiggles as long strands of ropy meat are separated from fat, bones, and skin. The essence of banana mingles with salt, rendered pork fat, and smoky meat—the signature flavors of kalua pig.

Marta Lane is a writer, author, and owner of Tasting Kauai Food Tours.