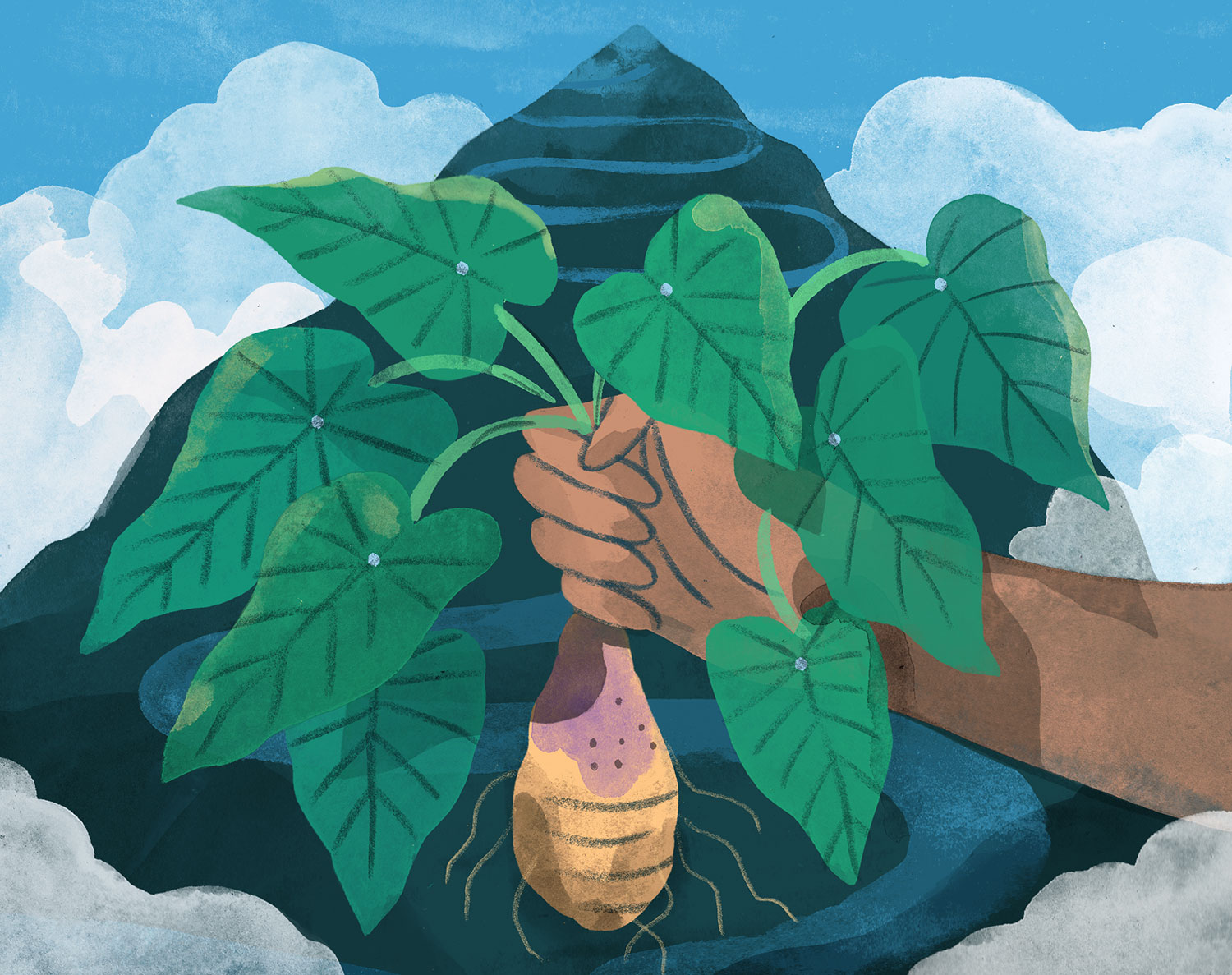 The tradition of fermented taro, along with innovative farming techniques, have jump started a new Hawaiian food culture.

In a way, sour poi delivered surfing to Hawaii. This happened about 1,700 years ago, when native Hawaiians pounded cooked taro corms—the taro plant’s underground stem—into a paste that promptly fermented. Since acid preservation extends storage time, Hawaiians could now worry less about the daily grind of finding food. So they made good use of their extra leisure time: They charted their genealogy back hundreds of years, flew giant kites on mile-long strings, and played with wood in water.

Today, tourists eat fresh poi at luaus. Or, more accurately, they eat it once at luaus and never again. Despite its importance in Hawaiian culture, most visitors say that poi tastes like wallpaper paste. It has the texture of thick pudding: clingy, gelatinous, and wet. But if eating it is like a novelty for tourists, the opposite is true for Native Hawaiians: What matters to people living off the land in an isolated paradise is that poi is filling and settles well in the belly; visual appeal, alkalinity, and beneficial probiotics don’t matter. It’s the first food babies eat, and many people grow taro in small plots, buy fresh poi from grocery stores or farmers, and ferment it at home. Fermented, or sour, poi tastes like nondairy yogurt. And just like sourdough starter, it develops flavor with age.

Early Hawaiians cultivated about 350 varieties of taro, with corms that can be red, green, and yellow to purple and white. (Much later, with the invention of clear plastic bags, grocery stores found that purple poi sold the best.)

In 1778, when Captain James Cook docked along the Waimea River on Kauai, he and his crew became the first Europeans to meet a thriving community of Native Hawaiians—and to encounter their diet of salted and dried fish dipped in sour poi. A patchwork of taro fields filled the alluvial plains. Dry-land taro flourished near coastal valleys, and wetland taro grew near kahawai, or streams.

Although it may sound like an oversimplification, one can argue that three innovative growing and storage techniques gave rise to a new Hawaiian culture. Planting taro in water quadrupled yields. Cool water acted like a refrigerator, prolonging harvest times. And pounding cooked corms into poi and then letting it ferment preserved the food.

The taro plant, which is a tuber like a potato, weighs up to five pounds. A stalk, about two inches in diameter and up to six feet tall, seeds new plants. After the corm is cooked, it’s peeled, cut, and ground into poi. Lactic acid, naturally found on the cook’s hands, inoculates the poi—which inspired the Hawaiian saying, “Good hands make good poi.”

The rest of the plant is also useful. For laulau, another Native Hawaiian dish, heart-shaped leaves bigger than a man’s head enclose a handful of pork or chicken before being steamed for eight hours; the bundles taste rich and mineral-y. Leaves are also cooked with onions and coconut milk in luau stew, a classic home-cooked dish. Poi is to salty food what ketchup is to fries: It’s not meant to be eaten alone; it’s an accompaniment. While Hawaiians plunge two fingers into the paste, cupping a scoop to their lips, they mostly eat it with something salty, like kalua pork or lomilomi salmon.

Fresh poi, or sweet poi, is creamy on the tongue with a mildly sweet flavor and a faint smell of grapes. When it’s thinned with water to the consistency of ketchup, it can be refrigerated and will stay sweet and creamy. Paiai, pounded taro before water is added, is as thick as masa dough. Topping it with a thin layer of water facilitates countertop storage, as it becomes very stiff when kept in the refrigerator.

Left on the counter in this manner, poi ferments like bread dough. In 12 hours, it’s laced with air holes and twice its original size. Teeming with probiotics, it tastes and smells slightly sour. The longer it lives, the more sour it gets. Some moms sweeten it with a little sugar. Sour poi is a nonfat replacement for oil in salad dressings, and a half cup adds a squadron of beneficial bacteria to your morning smoothie.

Imagine the first ancient Hawaiian sitting on the ground, tucking a papa kuʻi ʻai (wooden board) between his legs, then gripping a pohaku kuʻi ʻai (stone pounder) in his hands. In the Marquesas islands, where he came from, they pounded breadfruit. He decides that pounding cooked taro root yields equally delicious results, unaware that this simple modification will develop a unique society by nourishing inventive minds.

Look for taro corms in Pacific-Asian grocery stores. They should be heavy and hard, with a bark-like skin. Raw taro contains calcium oxalate, a natural pesticide. These tiny, needle-like crystals cause severe itching in the mouth and throat; cooking taro thoroughly removes them. Use a cold-press or masticating juicer for this recipe.

Marta Lane is a writer, author, and owner of Tasting Kauai Food Tours.