Get a free recipe
Subscribe
Sundays in the Park With Bagoong
By: Max Falkowitz 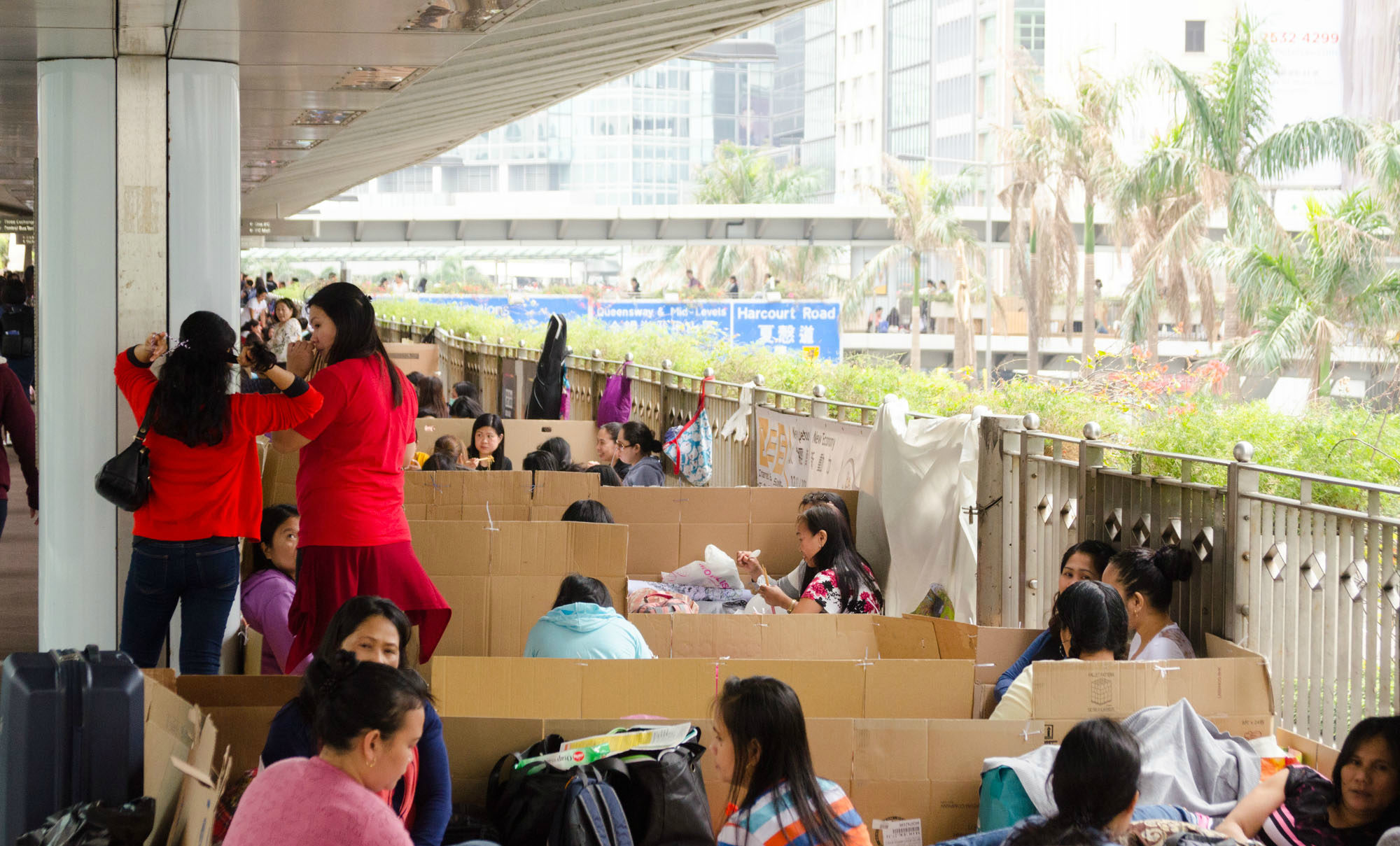 Once a week, Hong Kong’s domestic workers, many from the Philippines and Indonesia, take to public spaces for adobo-scented picnics and a quiet act of rebellion.

At 7 a.m., the first ladies have set up camp, flattening corrugated boxes into floor mats and erecting hip-height walls to mark their camps. By 10, they’re out by the thousands, scattered along sidewalks, encamped in parks, and perched above the street on skyways. In the shadows of the most expensive real estate in the world, these women have constructed a city of cardboard. And as they chat in Tagalog, swap mobile phone pics, and set up board games, they unpack their lunches. Hong Kong’s well-to-do families may be off brunching at dim sum, but here on the streets on a recent Sunday afternoon, it’s all adobo and bagoong.

Over 300,000 domestic workers live in Hong Kong—4 percent of the 1,000-square-mile city’s 7.3 million population—mainly women from the Philippines and Indonesia. “Helpers,” as they’re called locally, typically clean house, run errands, buy groceries and cook meals, and keep an eye on children. They get one day off a week, and most spend their day of rest attending church and participating in a citywide outdoor feast. They come with a border-crossing mix of imported snacks (biscuits, crackers, and sweets from their home countries, England, and beyond), home-cooked meals (foil trays filled to the brim with adobo or noodles), and boxes of fried chicken and spicy spaghetti from the beloved Filipino fast-food chain Jollibee. Older women with hand trucks of flattened boxes make deliveries to ladies setting up their camps. The temporary walls, one worker explains on a recent visit, grant privacy to anyone who wants to sun themselves or take a nap.

A few feet away from the massive International Finance Center in the city’s downtown Central neighborhood, a group of nine women has brought its A game. They sit around a spread of daing na bangus (salted fish marinated in vinegar and garlic, then fried until as crispy as Popeye’s drumsticks), pancit palabok (gravy-soaked rice noodles topped with shrimp and pork cracklings), a hefty tray of satay and lumpia, and a mound of romaine lettuce to keep things green. I crouch down and ask to chat, and the holy sting of chicken adobo catches my nose: lashes of vinegar, black pepper, and garlic.

These ladies—who, like all the women on the street spoken to for this story, requested that their names be withheld—have met every Sunday in this spot for the past two years. They come from the Philippines and send as much of their paychecks back home as they can. By law, they’re required to live with their employers, and the minimum wage for domestic work is just $4,410 Hong Kong dollars a month, about $560 USD, which leaves little to spend on leisure. Hence the streetscape of cardboard outdoors with friends—it’s free. Like most domestic workers in Hong Kong, they found work through recruitment agencies and are often saddled with massive debt. Elizabeth Tang, the general secretary of the International Domestic Workers Federation (IDWF), explains that while the law caps recruitment agencies’ fees at 10 percent of a worker’s first month’s salary, some illegally charge as much as six months’ salary, forcing workers into a pattern of indentured servitude. “The indebtedness presses them to endure all forms of violations of their rights for fear of losing their jobs,” she says.

Once they arrive in Hong Kong, workers must be on call day and night. Many families relegate helpers to sleeping in hallways or on the kitchen floor. Shorted checks, physical abuse, and sexual assault are all too common, to say nothing of the everyday discrimination that Southeast Asians face from the territory’s Cantonese majority. With little spare income, and often poor education, most domestic workers bear these hardships in silence. The few avenues of legal recourse they have are prohibitively expensive, difficult to navigate, and can take weeks or months. If a helper is fired, she has just two weeks to find work elsewhere before she’s deported. But no one can take away their Sunday. Which is why, since the 1980s, as a critical mass of Filipino migrants took to the streets, domestic workers have made the thousands-strong outings a weekly ritual.

In a foreign land where migrant workers are made invisible behind their employers’ doors, expressing unfettered public joy is a quiet act of rebellion.

One pair of young friends celebrates a birthday with a lavishly decorated cake. Ladies at the next camp are doing each other’s hair. At a third, a woman snacks on a handful of melon seeds while nose-deep in a pamphlet on migrant workers’ rights.

“Sunday is when migrant workers can meet friends from their countries,” says Phosuk Gasing, an executive committee member of the IDWF who’s worked as a helper in Hong Kong for 26 years. “They can speak the same language, taste food from their homes, and share problems and how to solve them.” The IDWF’s on-the-ground affiliate, the Federation of Asian Domestic Workers Unions, represents migrants to the government, disseminates educational materials, and advocates for survivors of human trafficking and employer abuse.

Sunday outings are the best time for these organizers to reach out to workers, pass along information, and assist with legal and labor issues. They’re also a way for new migrants to meet with more experienced workers and join a network of support. “For new workers,” Gasing says, “private employment agencies and the consulate are their only known contact points. Both don’t want to see migrants make any trouble. And even if they help, they also try to hide the case.” In a foreign land where migrant workers are made invisible behind their employers’ doors, expressing unfettered public joy is a quiet act of rebellion. To listen to the music you want, to play sports and worship with your peers, to eat food that reminds you of home before you return to someone else’s. “We come here, to this spot, every Sunday,” says one of the ladies from the A-game picnic. “We have nowhere else to go. But here we can catch up with each other and eat and relax.”

Another chimes in with a grin: “We just do what we feel like.”