Get a free recipe
Subscribe
In the Summer, Koreans Fight Fire With Fire
By: Nara Shin Photo: Lizzie Munro 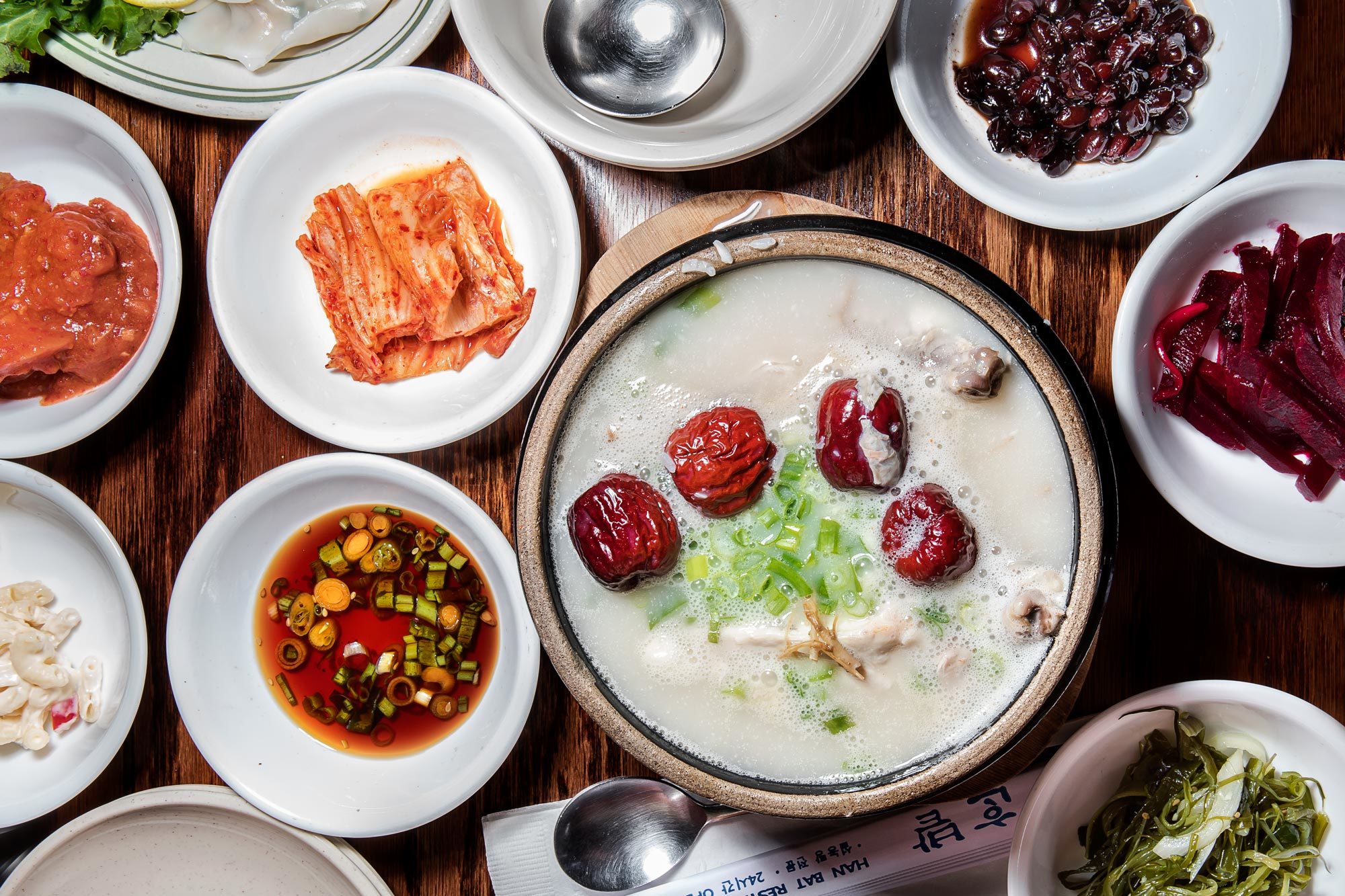 When the droning hum of window AC units joins the city’s perpetual chant (peppered intermittently with an ambulance’s solo wail), the murmurs begin. Soon, they’ll grow into communal clamors for heirloom tomatoes caressed with basil, glasses of chilled rosé, and plastic cups of cold brew, grilled corn, grilled burgers, grilled anything. But my hot-weather daydreams rarely contain the perfume of glowing charcoal. Because on summer’s most oppressive days, when madness and lethargy and rotting bags of trash rule the streets, I yearn for an unseasoned, boiling-hot chicken stuffed with sticky rice and herbs to bring myself back to life.

Samgyetang demonstrates the great Korean ritual of fighting fire with fire—or “like cures like,” goes the idiom, yi yeol chi yeol. It’s the case against gazpacho—is cold soup naught but a misnomer for dip or sauce?—or other chilled liquids as replenishing summer savior. Traditionally with this dish (which is wildly popular with home cooks and at restaurants writ large), you get a whole young spring chicken to yourself on the hottest days of the year, as decided not by Al Roker but by the lunar calendar. Bongnal is translated as “a day when the yin energy falls prostrate before the soaring yang energy,” or when the heat becomes overwhelming; this year, the three dog days, or sambok, are July 12, July 22, and August 11.

Samgyetang is a tonic for exhaustion with specific goals that distinguish it from international variations of “chicken soup when you’re sick” recipes: invigorate the appetite, get the blood flowing, improve respiration, reduce inflammation, and rebalance the body to become one with nature, rather than feel defeated by it. It’s so respected as a preventative cure-all that you can find it year-round at restaurants. But summer is when it’s by far most popular.

The soup comes together especially quickly because very little prep is involved. Rather than having to chop, julienne, or dice many ingredients, it can be pared down to: rinse chicken, stuff cavity, add water, and cook. Which is the most effort I’m capable of after a day wilting in the sun, shoulders heavy from the inescapable humid thickness.

The basic stuffing consists of uncooked sweet glutinous rice (washed if you have strength to spare), whole cloves of garlic, dried jujubes or dates, ginseng root, chestnuts, and ginger. Special upgrades can include eomnamu (also known as prickly castor oil tree), gingko nuts, lotus leaves, astragalus (also known as milk vetch root), and angelica root. This potent medley of traditional Chinese medicinal herbs forms an energy boost of a different sort than convenience-store protein bars and liquid shots, and they go down so easy in samgyetang’s savory broth. Anyone who’s ever tried (or in the case of my childhood, been forced to swallow) TCM—Traditional Chinese Medicine—“tea” knows how bitter the herbs alone can be.

Keumyoung Wie, who lives in the outer suburbs of Seoul, makes samgyetang for her family on at least one of the three lunar calendar dates. “The supermarkets have special chicken sales and packages of ginseng and other herbs around this time, so it’s actually pretty convenient to make on the day,” she tells me. (You can visit your local H Mart or other Korean grocery store for similar specials.) She speeds up the process even more by using a pressure cooker, so it can be on the table in about an hour, served with something spicy, salty, or crunchy. “Usually kimchi or kkakdugi,” she says, “because samgyetang can be a really bland dish.” Kkakdugi, cold cubes of crisp and juicy mu radish, are especially satisfying to bite into between spoonfuls of hot, porridge-like samgyetang.

Wie continues, “It sounds ironic, but we say these hot soups are siwonhada.” (It translates directly to “feels cool” and also to the effect of “hitting the spot.”) “I think people say that out loud as they eat samgyetang because you can feel the blood circulating as soon as you take your first sip.”

A bite of samgyetang in the summer transports me to the bulgama, a type of Korean sauna powered by an incredibly hot brick oven that my father frequents. So it’s no surprise he seeks out steaming stews when the temperature soars, in almost a re-creation of that experience. In Seoul, instead of throbbing AC units, the season’s greetings are provided by an invisible, omnipresent choir of cicadas in mating. Their crying provided a soundtrack to the regular trips my dad and I took to a no-name eatery around the corner from our family’s apartment, waiting for our samgyetang order, me lifting my thighs every minute or so to unstick them from the seat.

“Sweat out the toxins,” my dad says, patting his face with a handkerchief. “Relax the body aches. Increase blood circulation. And more importantly, kill time,” he laughs, explaining why he spends hours letting the heat penetrate deep inside. When I ask how he thinks eating hot soup became such a summer custom in Korea, he responds with his go-to “after the war, when we were poor, and there wasn’t much food” storytelling: “We didn’t have fans or air conditioning, but there were chickens in every backyard. Eating samgyetang now feels like a small celebration, a reward for surviving the dog days of summer.”

During the next heatwave, when the mugginess diminishes even the most spirited to listless rag dolls, and physical escape seems futile, is when the quest to find a small chicken and attain transcendental perspiration begins. Prepare herb kits ahead of time, like an emergency stash of stored energy. Based on levels of fatigue, soaking rice and chopping can be skipped over to go straight to stuffing. An hour’s worth of simmering later, when you’ve spiritually become one with the boiled bird: Sip and swelter, feeling the body recalibrate its internal thermostat. Sweat with purpose.

Nara Shin was born in South Korea and writes from Queens, New York.