Get a free recipe
Subscribe
Suman: A Meal for Between Meals
By: Rezel Kealoha 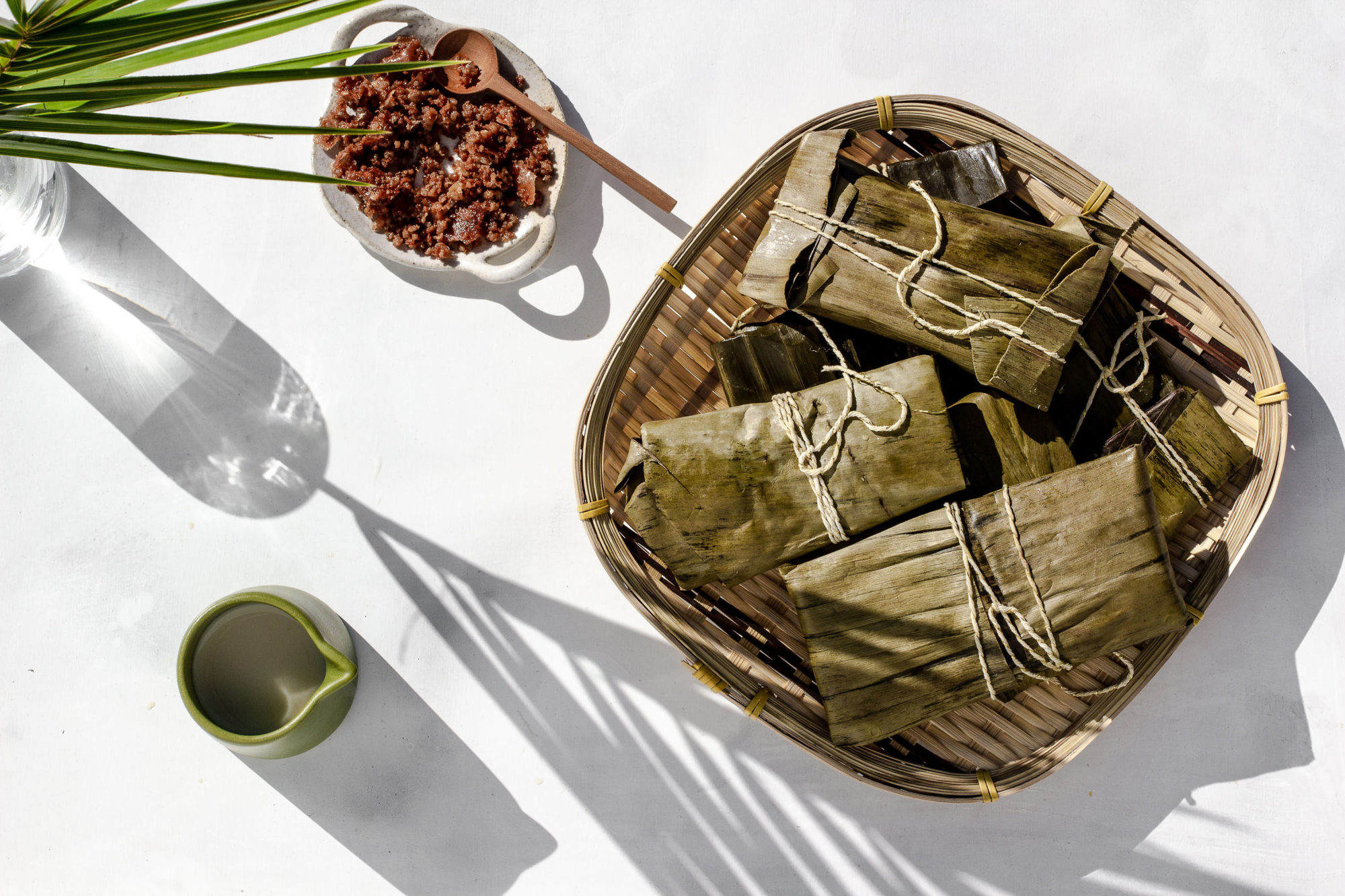 Dipped in sugar, this sticky rice snack becomes dessert. Sprinkled with dried fish flakes, it’s a bite to tide you over until dinner.

I was recently chatting with someone who travels to the Philippines often for business. He commented that Filipinos eat a lot. And we do. This is a typical day: Wake up, have breakfast, and clear the table. About two hours later, set the table again for morning merienda—a snack in between meals. Afterward, clear the table and get it ready for lunch. A few hours after lunch, it’s time to get the table ready again for afternoon merienda. A few hours after this, it’s time for dinner.

Between all of these larger meals, one of the most common dishes to serve during merienda is suman—a sticky-rice snack steamed in banana leaves.

Suman belongs to a family of Filipino desserts called kakanin, made from sticky rice, rice flour, or starchy root vegetables (like cassava) mixed with coconut milk. Ninety-nine percent of the time, kakanin are steamed, as there is no concept of an oven in a traditional Filipino kitchen. Other snacks that fall under the kakanin umbrella are bibinka (made with rice flour and topped with salty eggs and cheese) and sapin sapin, a colorful layered snack flavored with coconut, ube, and jackfruit. There are a variety of regional ways to make suman, but the most familiar and easiest to make is one that consists of sweet sticky rice mixed with coconut milk and salt. The rice mixture is spooned onto a banana leaf and wrapped tightly. The suman is steamed until the rice is fat and fluffy. It has similarities to the Cantonese bak chang (steamed rice dumplings) and tamales.

The ingredients are super simple; however, it is a tad labor intensive, especially the preparation of the banana leaves. Banana leaves can be found fresh or frozen in Asian or Latin markets. Since they’re often flash-frozen directly from the farm (dirt and all), it’s important to sanitize the leaves before using them. The best way to do this is to use heat. The heat does two things: It extracts the dirt from the leaves so that it is easily wiped off and makes the banana leaves pliable to use for cooking. If you have a stove with an open flame, that is ideal. Cut the banana leaves into the sizes you need for wrapping and then pass them over the flame for just a second or two. Use a kitchen towel to wipe off the oils and residue.

Growing up, my favorite way to eat suman was to simply to dip it in some sugar. Because this recipe has no added sugar, you can eat it with savory toppings, too, like some dried fish flakes or sour green mangoes. My mom in particular likes her suman with freshly grated coconut and a crispy topping called latik. Latik is a magical condiment that is uniquely Filipino. It’s made from the fat solids in coconut milk. You heat up the coconut milk slowly until the fat starts to separate from the oil. Then you keep stirring and cooking until the fat starts to get brown and crispy. At the same time, you also manage to make your own fresh batch of coconut oil. Save it and use it for baking.

Making suman is a bit of a project, but it will leave you with leftovers for days. It’s also a perfect “to go” food as you can eat it with no utensils by just unwrapping the banana leaves. My grandmother would make a big batch and put it in lunches for all her kids. It’s great cold, but you can also microwave it for 30 seconds right in the banana leaf. My grandmother liked to revive leftovers by coating them in coconut sugar and pan-frying in coconut oil. All it takes is frying on medium heat for 2 minutes on each side and serving with some caramel and fresh mangoes.

California based photographer, food stylist, and recipe developer Rezel Kealoha focuses her cooking on seasonal California produce. Her recipes are inspired by her time living in the Philippines, Japan, Australia, and Singapore. RezelKealoha.com