Get a free recipe
Subscribe
The Stretchy Story of the Accidentally Italian Arepa
By: Michael Harlan Turkell 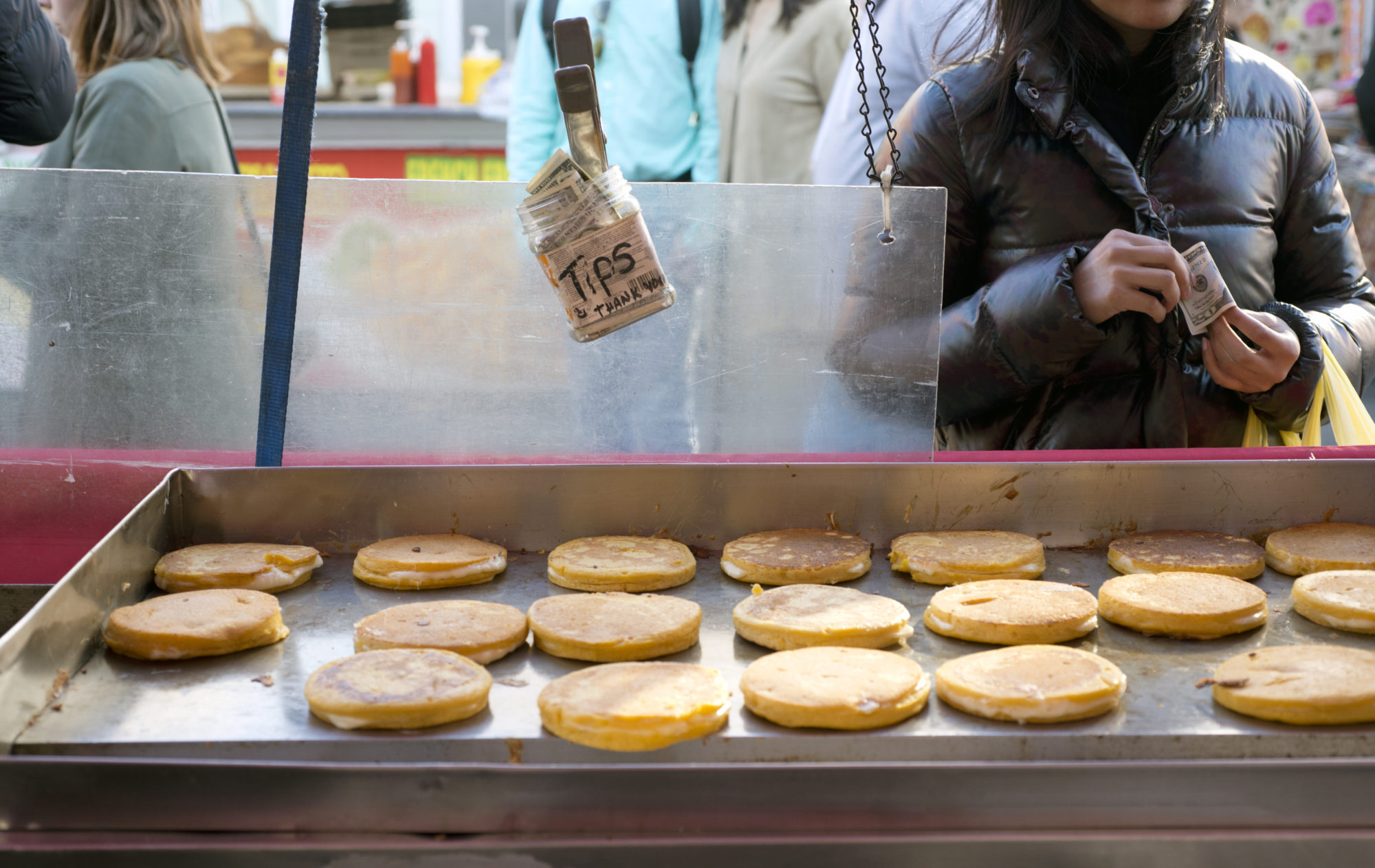 How did the Mozzarepa—a sweet corn arepa filled with an arm’s length of melted mozzarella—become a staple of street fairs?

Thirty-five years ago, Colombian immigrants Luis and Flor Leon paid nearly $1,000 cash to the one and only John Gotti, the infamous head of New York City’s Gambino crime family at the time. This granted them the privilege of selling their canary-yellow arepas de choclo, now known to New Yorkers as Mozzarepas, at the Feast of San Gennaro festival in Little Italy, a nearly 100-year-old street fair that arrives every sweltering September on Mulberry Street. Surrounded by booths hawking zeppole, funnel cakes, and calzones, the Leons struck gold and have set up shop at the fair ever since—changing the culinary landscape of NYC’s ubiquitous spring and summer street fairs forever.

Colombians have been cooking arepas—toasty griddled rounds of dough made from white cornmeal—for nearly 3,000 years. Choclo (a Quechuan word meaning “tender corn”) integrates fresh corn kernels into the mix, generally stuffed with salty cheese. In Venezuela, a similar corn-and-cheese mashup is called cachapa, the Spanish word for crumpet, but rather than sandwiching the cheese, a single arepa is simply folded around it, like a taco. And Mozzarepas, with an arm’s length of stretchy warm mozzarella sandwiched between two griddled sweet corn pancakes, have become embedded in New Yorkers’ DNA.

In Colombia, there are many versions of griddled and ground maize doughs that are eaten every day, but only a few options for arepas de choclo exist in New York City. I’ve long enjoyed the ones from the Arepa Lady, a fixture on 37th Avenue near 78th Street in the Queens neighborhood of Jackson Heights, and a recent addition to Brooklyn’s DeKalb Market’s food hall.

My friend Mariana Velasquez, a Brooklyn-based food stylist and native of Colombia, has told me stories of smoke billowing from rural roadside arepa stands all over her country, the sound of gravel kicking up underneath her tires as she pulls her car off the road. She orders arepas de choclo cooked over hot coals or wood, some even over smoldering plantain leaves. Some stands wrap the cooked arepas in fresh leaves, a natural sort of carry-out bag. “Arepas are like our bread,” says Hervey, the Leons’ eldest son, who, with his two brothers, runs the sprawling Mozzarepas business. Hervey started working for his father’s lunch trucks in Port Elizabeth, New Jersey, when he was only 12 years old. “I served longshoremen Sanka and Pall Mall cigarettes.” But after a few years of serving stevedores, his father decided to trade in the trucks to focus on arepas de choclo. “They’re so versatile,” says Hervey. “They’re excellent on their own, great with coffee, and in Colombia, they’re traditionally eaten with hot chocolate,” aligning them with churros and crullers.

In 1980, the Leons launched their original brand, Arepa Jumbo, in their hometown of Elizabeth, New Jersey. And while they have upgraded from the commercial-grade stainless steel grill they’d illegally installed in their basement to a commissary kitchen that assembles and distributes 5,000 to 7,000 parcooked Mozzarepas per day to bodegas, markets, and over a dozen family-owned portable stands throughout the tristate area, their recipe has barely changed. Except for one thing: the cheese.

The Leons found their cheese of choice when an accidental mozzarella delivery showed up from Mario’s Provisions in Newark.

Originally the recipe called for queso fresco, but the Leons found their cheese of choice when an accidental mozzarella delivery showed up from Mario’s Provisions in Newark. They’ve been making their arepas with mozzarella ever since—a cheese that brings the perfect balance of creaminess and chew to the arepas. After it was determined that popular pizzeria brand Polly-O didn’t hold its shape well enough, the family landed on Galbani, née Sorrento, as its go-to mozz. They registered the trademark for Mozzarepas in 1993, a decade after first setting up shop at the San Gennaro festival.

Last month I paid a visit to two different Mozzarepas stands that had set up at a Chelsea street fair. At one stand, manned by Alex Leon, the middle brother, a few dozen Mozzarepas at varying degrees of doneness lined the 36-inch Blackstone model cooktop. Alex told me this was nothing like the Fourth of July in Long Branch. “Exit 105 on the Jersey Shore for Ocean Fest, the promenade is wild,” he says. “We sell nearly 5,000 that day, from 10:00 a.m. until the fireworks.”

The Leons work 700 “shows” (as they call them in the biz) every year, 80 percent of which are outdoors, spending on average $500 a day to have a tent at festivals, with no rain date or refund guaranteed. They update their calendar via social media weekly, teasing out new menu items they’ve been experimenting with.

A few blocks away, a line grew around the unmistakable aluminum-framed red tent at the southeast corner of 23rd Street and 8th Avenue in Manhattan. The corn dough crisped on the grill in the open air, the saccharine smell drawing in customers and the crunchy little bits of frico—the lace of toasted cheese formed where the melted mozzarella met the steel plancha—making them irresistible to anyone who approached.

Bryan, Hervey’s youngest brother, placed a warm arepa, straight off the griddle, into a small folded paper plate barely big enough to cover the circumference. I heard Hervey telling patrons, “Be careful, the center’s hot,” but it was too late; most had taken a bite immediately and burnt their mouths, breathing out hot steam like a manhole cover.

Hervey tells me the best way to navigate this is by holding the arepa upright at the base with two hands and taking a small bite from the edge. He demonstrates this technique by pulling the arepa away from his mouth. “It cools as it stretches,” he says, “and it’s a walking advertisement”.