Get a free recipe
Subscribe
Strawberry and Kiwi: Why?
By: Jaya Saxena Illustrations: Dingding Hu 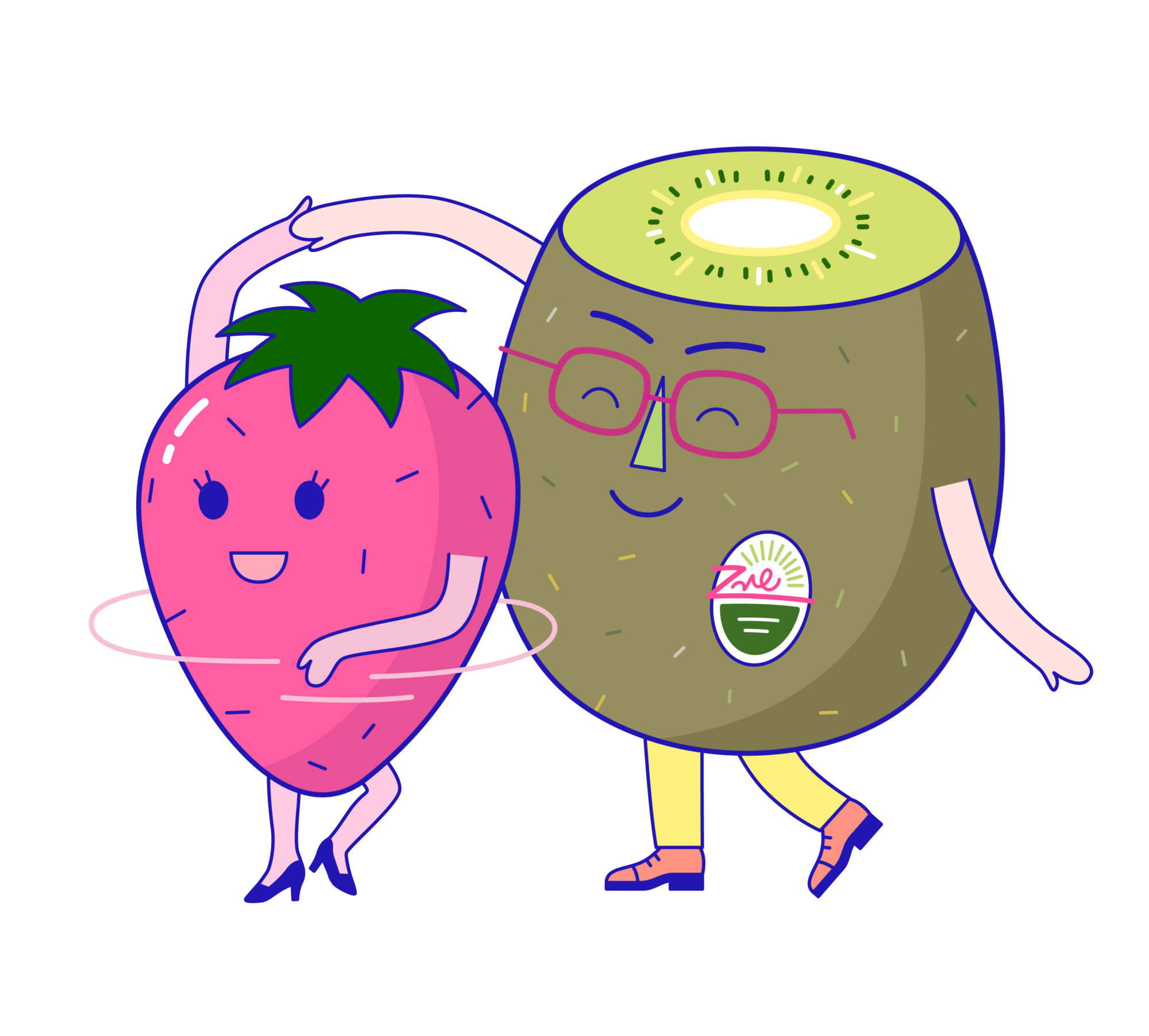 The 1990s were a sugary blur of pink and pale green iced tea labels. Here’s the story behind the great effort to normalize (and commercialize) kiwis for an American audience.

In the late 1980s, California kiwi farmers had a problem. In 1970, The New York Times had introduced kiwi in a story about “new plants,” suggesting that it was “tasty for ice cream and preserves as well as eating fresh.” In 1975, there had been a “kiwi revolution” in the state, with farmers jumping to grow a fruit that was exotic—though accessible—enough to demand a high market price. Kiwis, which were largely introduced to the country by New Zealand imports, were new and interesting to the American palate, tangy and firm with the added crunch of their seeds. They made a flashy addition to a fruit tart or Jell-O salad.

But by the late ’80s, farmers were scrambling to make ends meet. The problem was “everyone—except consumers—jumped on the kiwi wagon, creating a glut that just won’t go away,” wrote a newspaper from Santa Rosa, California, in 1988. The kiwi-farming community came together, trying to find a way to make kiwi as normal in the American kitchen as the apple.

If you ever chugged a bottle of Snapple Kiwi Strawberry Juice Drink to wash down your Gushers after a grueling day of fifth grade, you have California’s kiwi farmers to thank.

In the ’90s, there was strawberry-kiwi-flavored Gatorade, applesauce, Bartles & Jaymes wine coolers, Jell-O, Airheads, Kool-Aid, lip balm, yogurt, and Mad Dog 20/20. It was everywhere, and the inexplicable combination of strawberry (native to France) and kiwi (native to China) didn’t make anyone bat an eye.

This was due, in part, to California Kiwi Products. The company was founded in 1986 by Graham Kjestrup (who did not respond to requests for comment) and developed several new products utilizing the excess kiwi fruit, such as kiwi juice, kiwi daiquiri concentrate, kiwi ice cream, and a kiwi soda that the advertising director of the California Kiwi Commission described as “actually pretty tasty.” By 1988, CKP had created Kiwi Island Brand, a line of drinks that included kiwi juice, kiwi-banana juice, and, you guessed it, kiwi-strawberry juice. Kiwi strawberry would be nowhere without juice and tea behemoth Snapple, which may or may not have been directly inspired by Kiwi Island. When we reached out to the company, Snapple claimed its flavor launched in the late 1980s, but the brand could not provide any proof, and an article reported by Bloomberg Business Times put its launch somewhere in 1992. Either way, Snapple’s Kiwi Strawberry juice cocktail was out on the market by the early ’90s, and combined with the overall popularity of Snapple, it “helped the juice drink market grow by 11% in 1994,” according to one report.

By 1995, Kiwi Strawberry was Snapple’s number one flavor. Wendy Kaufman, the “Snapple Lady,” was a legitimate celebrity, having been plucked from Snapple’s marketing department and put on the air thanks to her charismatic personality and thick New York accent. Kaufman started getting fan mail and told the Daily News that she had started receiving letters about how Kiwi Strawberry Snapple improved fans’ sex lives. She specified that the letters were “not dirty, but about how the drink worked for them,” though this explanation certainly raises questions about why she wasn’t getting the same about Peach Iced Tea.

Soon, many of Snapple’s competitors had developed their own kiwi-strawberry drinks, from Mystic to Country Time Lemonade. When asked why they introduced a kiwi-strawberry flavor in 1996, representatives from Bartles & Jaymes said it was pretty simple: “Bartles and Jaymes wants to give people what they like—at the time, we found kiwi strawberry to be a popular combination.”

The rise of kiwi strawberry coincided with both the rise of other New Age flavors, like mango and ginseng, coming to the market and a boom in consumers’ thirst for fruit juices and drinks, largely driven by a health-conscious public’s focus on eating more fruits and vegetables. Nutritionists were warning about the dangers of sugary sodas, and fruit juices seemed like an ideal way to stay “healthy” even though they were often nutritionally indistinguishable from soda (as many pointed out when Snapple attempted to replace soda vending machines in New York public schools with its own products). But the image seemed to matter more. Drinking something with kiwis and strawberries on the label just felt better than downing another cola, even if the former had more grams of sugar than the latter, perhaps in a way a chocolate-and-caramel-covered granola bar feels more virtuous than a Snickers.

The adventurousness was key; people weren’t just content to switch from soda to orange juice, and according to Finn, that’s because the American middle class wanted to be seen as not just healthy, but cool.

“The ’90s are remembered as the heyday of low-fat dieting and fat-free snack foods,” says food historian Margot Finn. Kiwi Island touted its juice’s health benefits, saying kiwi was a great source of vitamin C, potassium, and fiber. Snapple’s pitch was “the best stuff on earth.” The kiwi may have been a little weird, but it was “good for you.” Combined with the familiarity and popularity of strawberry, the flavor appealed to anyone who thought themselves health conscious and a little adventurous.

The adventurousness was key; people weren’t just content to switch from soda to orange juice, and according to Finn, that’s because the American middle class wanted to be seen as not just healthy, but cool. The end of the Reagan revolution meant there was expanding inequality and stagnating class mobility, meaning it was harder to signal class just by being rich. So to differentiate themselves, “college-educated urban professionals embraced foods that were seen as fancy, thinness-promoting, natural, and authentically ethnic or foreign,” she says. “These trends were primarily a reaction against food seen as industrial, mass-produced, frugal, reliable, and familiar.” Mott’s apple juice and Pepsi were for the working poor, while kiwi-strawberry fruit cocktails were bait for the bougie.

As with all trends, these New Age flavor combinations started seeping into everything else. There was yogurt and candy and soda, and soon enough, the flavors that had belonged to the urban professionals were loved by everyone. Which made them lose their luster to the trendsetters. There was also the resurgence of low-carb dieting around the year 2000, says Finn, that shut the coffin on sugary drinks for a while, no matter how exotic their flavors. Bartles & Jaymes retired its kiwi strawberry wine cooler, saying its new line of drinks was much lower in sugar and calories. They now come in flavor combos like grapefruit and green tea, and cucumber and lime.

Though it may be seared into many of our memories as a ’90s-specific flavor profile, kiwi-strawberry isn’t dead yet. Snapple is still kicking, and you can find the flavor in hard seltzer and vape juice. Still, we’re firmly in nostalgia territory, remembering a time when the combination of two sweet fruits was seen as adventurous. Kiwi-strawberry walked so flavors like green tea and hibiscus could run. And the California Kiwi Commission did its job; kiwis, while still not as omnipresent as the apple, are no longer a shocking, alien fruit.