Get a free recipe
Subscribe
Stir-Fry Your Potatoes, Scramble Your Mind
By: Cathy Erway 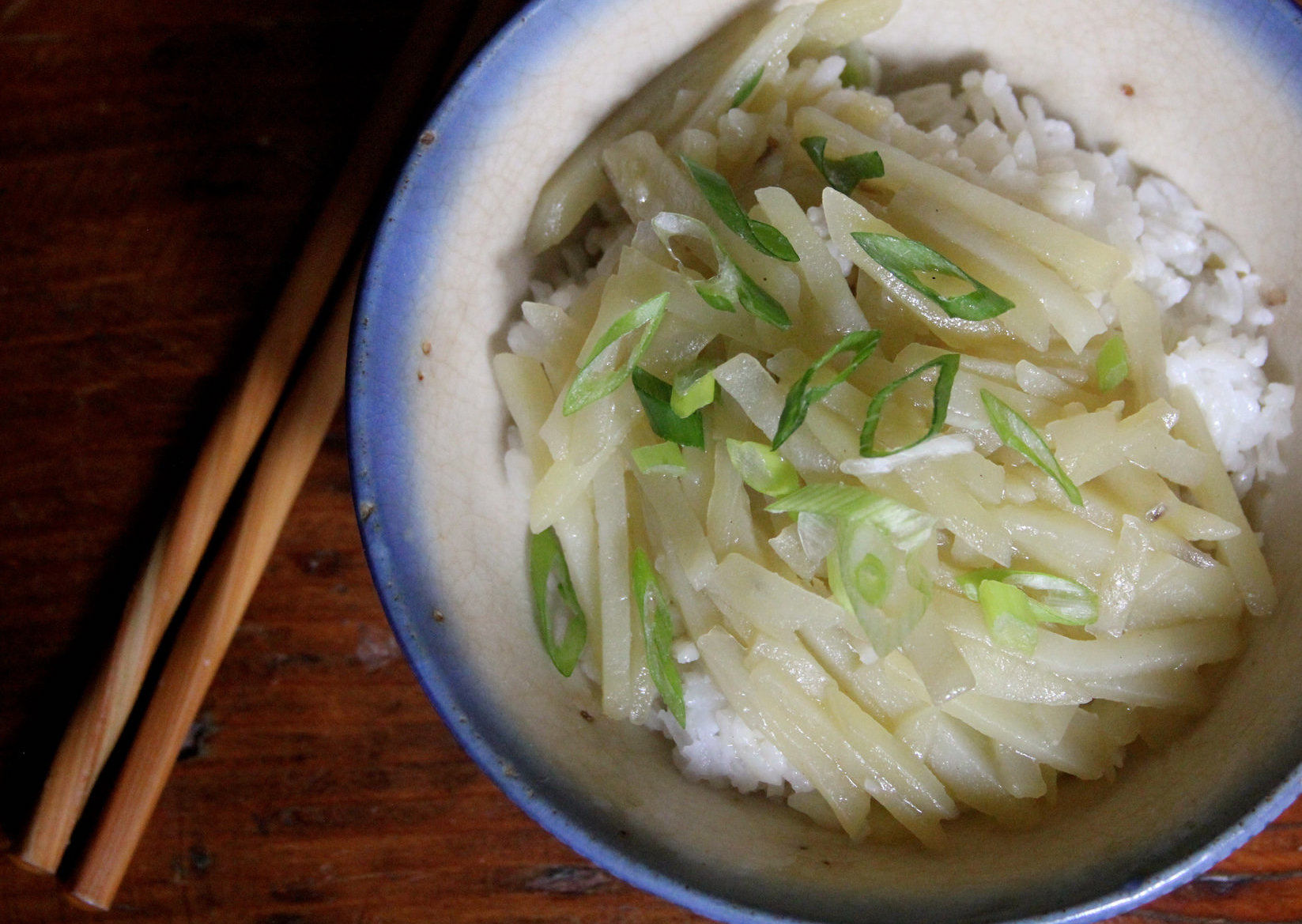 My mom will hate me for writing this. But the dish I treasured the most as a small child was the one she was the most ashamed to make. It must have been a slip of judgment; a stray potato must have been growing warts in the crisper. She peeled it, cut it into thin, round slivers and then matchsticks by cleaving through a stack of them. Then she stir-fried them with diminutive bits of ginger, salt, white pepper, and a few splashes of water to let them braise until soft. I ate it on a bed of white rice.

Licking the bowl clean of potato-y oil and sauces, I asked her what it was. She scowled and shook her head. Nothing! Just a snack. It was not a proper dish—it had no name. Plus, it made no sense! It was starch on starch! Some kids love pasta with butter. Some want nothing more than ramen noodles, sans the broth. To my American-born palate, potatoes were just about the most comforting thing on the planet—besides rice, another staple in our half-Chinese household. But these potatoes weren’t anything like the mashed potatoes I’d devour at Thanksgiving, or the home fries I’d vacuum up at a diner. These were wet, slippery sticks that melted in your mouth. Defying most potato or stir-frying logic, they were not crisped to a golden brown but pallid. And their liquids coated the rice, flavoring everything subtly with ginger.

The Chinese may not be all that big on potatoes. But they are big on folding just about any vegetable into their go-to dishes (often stir-fries). Don’t have a fuzzy squash or loofah gourd? Try a zucchini. Have big, juicy stalks of American celery instead of skinny Chinese celery? Slice them into long, thin blades on the bias. And so on. While the nutrient profile of potatoes may share much in common with grains, their vegetal structure—crisp cell walls that break down, only this time with additional starches that create viscosity—makes it possible to cook quickly by sautéing or braising. My mom may have been acting instinctually, but stir-fried, julienned potatoes is a homestyle dish enjoyed in some parts of China, where white potatoes can be a rarity. You can find recipes here and there for Chinese slivered potato dishes, sometimes spiced with chiles. But it’s a peasant dish and therefore doesn’t get the respect of being canonized in many cookbooks. My mom recalls that her father sometimes made it with strips of pork, and she guesses that every household has its own way of stir-frying potatoes. According to other recipes, the potatoes are rinsed several times to remove the starches, creating a shredded vegetable that could be confused for daikon radish. But my mother and her father weren’t keen on that, and I favor some sauciness in the dish as a result.

However you serve it, it’s unlike much of what we’ve seen throughout this potato-filled planet, rendering a familiar ingredient in the American repertoire unrecognizable. My mom never intended to repeat the dish—or snack. But my continuous pleading eventually broke her resolve. Now every time I see a lonely potato in the fridge, it’s the first thing I think of to cook. So here’s to nothing. This time, I’ll give it a name.

Stir-Fried Potatoes With Ginger and Scallions

This is a versatile one: It can be served as a complementary side—perhaps a softening yin component to more robust yang dishes. Or you can think of it as a starchy base to your meal. I love eating it over white rice, sometimes with a fried egg and chile oil. There are no rules for how to eat it. Similarly, when it comes to cooking it, you can follow this recipe to have a more al dente texture to the potatoes. Or you can continue cooking them, adding more water as needed, for a softer, melt-in-your-mouth texture.