Get a free recipe
Subscribe
Stay Inside and Make Some Boba
By: Anna Hezel Photos: Christopher Testani 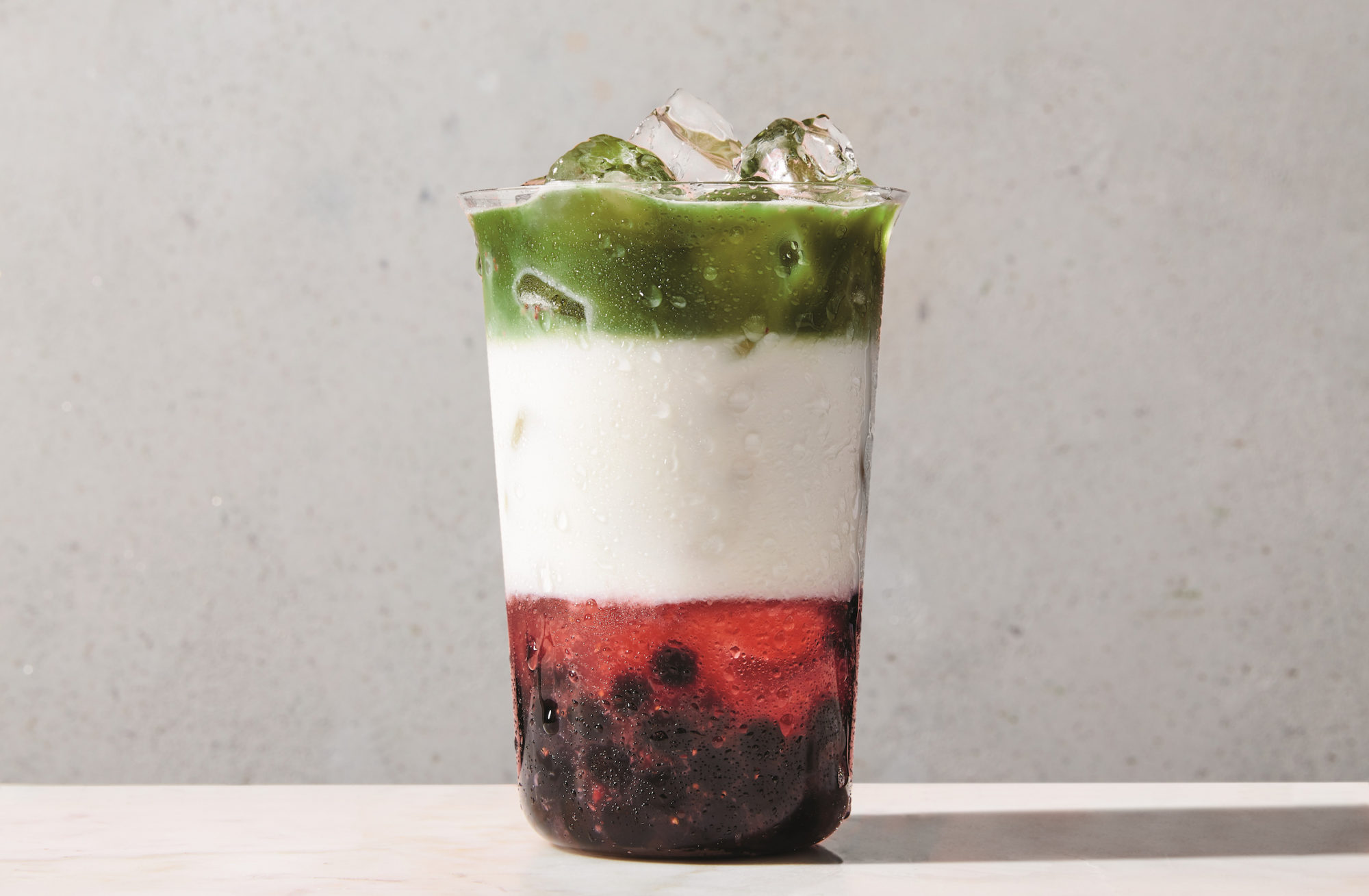 A chat with the Boba Guys themselves.

When Andrew Chau and Bin Chen opened the first Boba Guys shop in San Francisco in 2013, they took the city by storm with their colorfully layered milky tea drinks full of chewy tapioca pearls. Since then, they’ve become a national phenomenon, with 17 locations in California and New York. And boba, more generally, has captured the imagination of everyone from Alexander Wang to Kacey Musgraves.

Although COVID-19 has devastated the restaurant industry, Chau and Chen have quickly pivoted their shops to delivery and pickup and have taken to Instagram Live to help their friends and customers make their own boba tea at home. Luckily for all of us with those DIY aspirations (and a little extra time at home), they’ve also just released The Boba Book, full of recipes and revelations about their cult-hit drinks. We caught up with them to find out what it takes to make a really good (and Instagrammable) boba tea at home.

A lot has changed at Boba Guys over the last two months, but it’s cool to see that your shops are back up and running. How are you guys doing, and how has it been adapting to this new reality?
Like everyone else, we’re a bit anxious about the future, but we’re entrepreneurs, so rolling with the punches is a core part of our DNA. That being said, we’re definitely sleeping a lot less!

On a personal level, we’re probably even more hungry now than ever before—we’re trying to bring our entire team back (we call it #ReverseTheSnap, like in Avengers: Endgame). What’s keeping us going is knowing we have a good shot at surviving this and fulfilling our promise to our team and community. We’ve always said that Boba Guys is a business built by the people.

Since people are stuck at home (with their stockpiles of oat milk), it’s kind of a perfect time to try out a DIY approach to boba. What’s the hardest thing to get right if you’re making boba tea at home?
If we do our job right in The Boba Book, we think making the actual drink itself is pretty easy. It’s the philosophy and open-mindedness that’s hard. One of the key themes in the book is that the world of boba is responsible for a lot of the innovation in the beverage space, yet a lot of the credit goes to third wave coffee and trendy cocktail bars. People forget that the boba world is what made oat milk popular, jellies in beverages normal, and zany infusions of teas, fruits, and milks all the rage.

But there is one pro tip coming up a lot: make sure you account for dilution. A lot of people use room-temperature teas and solutions for drink bases, but if you don’t account for the dilution when you add ice, your drink will be watered down. It’s why we recommend using concentrates throughout our book and in our store operations.

Why do you think boba has exploded so much in the United States over the last decade? And how common (or uncommon) is it for boba shops to focus on carefully sourced or house-made ingredients the way that you do?
We don’t know why it blew up over the last decade. We do like to think we had something to do with it, as all the media coverage and “boba is normal” started right when we were taking off. If we were to analyze it a bit more, we think it has to do with an evolving American palate combined with brands like us getting better at storytelling and making our drink more accessible. Thirty years ago, Americans had a hard time processing the idea of consuming raw fish, thinking it was a health hazard. Now, it’s completely normal. We think the same goes for boba . . . it somehow got normalized over time. It helps when we have prominent public figures like Alexander Wang, Kacey Musgraves, and Hilary Duff coming out as self-professed boba lovers. Times are a-changing!

Is there one specific drink in the book that you’ve noticed people especially gravitating toward?
Other than the Classic Milk Tea (the industry’s core drink . . . kinda like the vanilla ice cream of boba), people seem to really love the banana milk recipe. We think it’s because it’s accessible for Americans. We aren’t used to drinking bananas, really, other than maybe a shake or a float. But we know in Asia that it’s a legit thing—almost as common as Kool-Aid or Yoo-hoo in America . . . wait, do they still make Yoo-hoo? We’re dating ourselves.

What’s really cool is that we’ve recently seen some people take the original banana milk recipe and make it their own. This whole dalgona craze (i.e., whipped coffee) is sweeping the shelter-in-place zeitgeist right now, so a lot of people are combining a dalgona coffee over our Korean Banana Milk recipe. We just made it ourselves and . . . OH. MY. GOD. It’s like a flavor explosion. We already had an Espresso Banana Milk special coming up this summer, which is based off of Andrew’s favorite coffee shop in the world, Heart’s Light in Tokyo. The dalgona banana milk makes that drink next level.

Is there a perfect snack to go with a tall glass of boba tea?
Yes, you are going to hear it from us first . . . SALTED EGG CHIPS! Americans, get ready for salted egg EVERYTHING. We’ve been eating it for nearly a decade, as it’s popular in our circles. It’s an everyday snack in Singapore and other parts of Southeast Asia. We’ve been carrying it in our stores for a couple years now, trying to introduce it to the masses. We need more people to get on this bandwagon—there’s plenty of room!

I love the idea of a marmalade drink—using this shelf-stable preserved fruit to make a really fragrant, flavorful tea. Can you tell me a little bit about where that idea came from?
Yes, we love this question, as it illustrates our company’s mission: to bridge cultures. So, we Americans know all about marmalades and jams. We both grew up on Smucker’s and Welch’s, but we usually consumed them in the form of peanut butter and jelly sandwiches. We never considered using it as a flavoring for drinks.

But in Asia, particularly in Korea, there is a similar culture of marmalades and preserves made from honey and fruit. The difference is they also use them for beverages as well. The most popular is a citron honey tea called yuja tea. You can get this at any Korean or Asian supermarket. Traditionally, you make yuja tea for coughs, sore throats, and even skin remedies. We just took this idea further and made marmalades a base component for our drinks.

In our stores, it was done for practical purposes: marmalades are shelf-stable, and we can make preserves with fruits that are out of season.

What three tools should every at-home boba starter kit have?
A good blender, a whisk, and a saucepan. We know those are not things you normally associate with making drinks, but once someone sees all the things you can make for drink components, you’ll see more fridges stocked with marmalades, purees, bitters, syrups, and concentrates. It’ll make drinking way more fun. Arnold Palmers are great, but it’s time to introduce new beverage staples! Oh, can we add a fourth? A good strainer for tea and coffee helps. We recommend a piece of muslin or cheesecloth as the best strainer around.

Why is The Boba Book the perfect book for these imperfect times?
It’s funny you say that it’s the perfect book during this crisis, because it sure didn’t feel that way when we decided to delay our book tour back in February. But as life would have it, it’s now a great time to experiment with recipes at home. After baking banana bread, dalgona coffee, and chocolate chip cookies for three straight weeks, it seems like boba is accessible enough for people to try at home. We’re overwhelmed with all the positive comments, tags, and reviews. All we were trying to do was to make something so dear to us feel normal to the masses. Thai Iced Tea
With ripples of sweetened condensed milk, this orange tea will give your cold brew routine a run for its money.

Strawberry Matcha Latte
If you have matcha, some strawberries, and milk, this tiered drink can be yours in just a few minutes.

Yuzu Pear Marmalade Tea
This tea takes shelf-stable marmalade and turns it into a sweet, fruity, floral iced tea. Make your own marmalade, or try it with whatever’s in your fridge.

Tapioca Balls
If you order tapioca balls online (Chen and Chau recommend Lollicup or Bossen), this recipe will help you get them to the perfect chewy, brown sugar–tinged consistency.

Big news for all the Bon Appétit Gourmet Makes fans out there: Claire Saffitz’s first cookbook, Dessert Person, comes out this fall, and it’s available for preorder now.

Penguin Random House has brought together some greatest hits from authors like Alison Roman, Christina Tosi, Samin Nosrat, Ina Garten, and more in Family Meal. The digital cookbook is going for $5.99, and all proceeds go to the Restaurant Workers’ COVID-19 Emergency Relief Fund.

Bread on the Table, by David Norman of Easy Tiger Bake Shop in Austin, Texas, is here for all of your French, Italian, and Scandinavian bread-baking aspirations.

If your roasted vegetables and frittatas need a bit of a makeover, leave it to Power Spicing, by Rachel Beller.

The Tinned Fish Cookbook, by Bart van Olphen, takes a category of ingredients that’s on many of our minds and makes it work for every meal of the day.

And from the TASTE archives: Mexican food scholar and prolific author Diana Kennedy says goodbye to her cookbooks.

EACH WEEK, WE TALK TO AN AUTHOR OF A NEW OR UPCOMING COOKBOOK WE LOVE. SUBSCRIBE TO OUR NEWSLETTER TO GET THESE PREVIEWS (PLUS EXCERPTED RECIPES) IN YOUR INBOX.