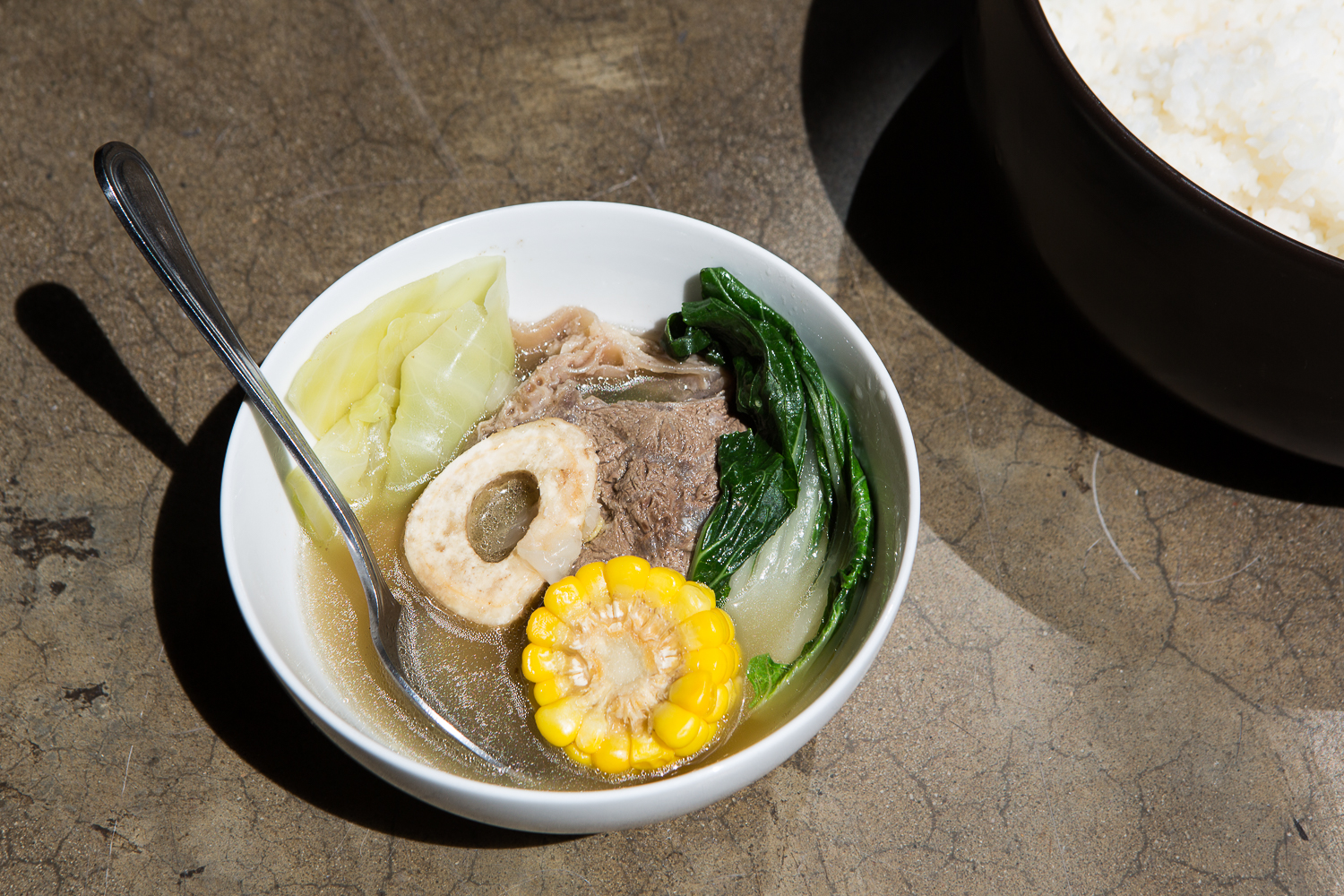 At the Filipino dinner table, spoons rule over forks and knives. There’s a story.

As a kid, one of my chores was setting the table for dinner. The setting consisted of a placemat, one of the Corelle “Butterfly Gold” plates that was so ubiquitous in American households throughout the 1980s, a folded paper towel, sometimes a fork, and always a spoon.

When it came to sinigang na isda, a Filipino tamarind fish soup full of wilting tomato, spinach, and onion, I dodged the vegetables and floating fish-head parts and poured the sabaw (just the broth!) into my shallow bowl of white rice. I grabbed my trusty spoon and started eating. Even as an adult who now thoroughly enjoys vegetables and floating fish-head parts, I still attack Filipino dishes with the curved edges of a spoon.

Both at home and in restaurants, Filipino people tend to prefer a spoon over a fork and knife, whether or not they’re eating soup. The origins of this boil down to the convergence of colonialism and tropical climate. Despite the nation’s proximity to China and Japan, chopsticks never took on with the population. The most economical way to eat was kamayan style, or with your hands, straight from a banana-leaf table runner. The hands-only tradition still rings true in many rural areas as well as modern New York City restaurants like Jeepney.

In 1521, Ferdinand Magellan landed on Homonhon Island to kick off 300 years of Spanish rule. According to Felice Santa Maria, the author of The Governor General’s Kitchen, host families were asked to entertain foreign guests. Their style of hospitality mixed local produce with colonial cuisine. Following the brutal trifecta of the Spanish-American War, the Philippine-American War, and World War II, the United States occupied the territory. American First Lady Helen Herron Taft wrote about her visit to the islands, noting the difference in customs but Filipinos’ willingness to conform and adapt.

Centuries of feeding foreign dignitaries ushered in kubyertos, from the Spanish word cubiertos, which means cutlery. To further enforce this, Americans in the 1950s introduced home economics to Filipino school systems. Books like Susie Butt’s Housekeeping: A Textbook Guide for Girls in the Public Intermediate Schools of the Philippines outlined how proper citizens should eat with utensils, not just for special occasions but in everyday life. But as is often the case with colonialism, some of the new customs stuck around, and some of them did not make the cut. While forks and knives each have their own specialized roles for skewering and slicing up bites of food, the spoon can do many things at once. It can scoop up liquids and saw solid foods in half.

A considerable amount of Filipino cuisine traditionally was soupy or stew-y due to a longtime lack of refrigeration in a tropical climate. Meat was boiled and boiled and boiled to prevent disease. Offal was never wasted; it just needed more cooking time to tenderize or cleanse of impurities. The resulting concoction was a stew that was served alongside white rice to fill the belly cheaply. There are noodle soups like sotanhon, a chicken noodle soup with rice vermicelli; and miswa, broth with delicate wheat-flour threads. There are broths packed with vegetables like tinola, which sings with clear ginger broth and leafy greens akin to arugula. And there are rice porridges like savory arroz caldo, simmered with ginger and finished with lemon, and sweet champorado, made with chocolate and condensed milk. Knives and forks aren’t entirely missing from Filipino households. Forks often appear at the dinner table, rarely to raise food to the mouth but more often to hold a chunk of meat while you dig into it with a spoon or, like a rake, scoot sabaw-soaked rice onto a spoon. You still need knives to cut large pieces of meat in the kitchen, but they are not part of the everyday table setting. Our humble spoon and fork, on the other hand, are so iconic that many households hang up giant wooden tributes in their dining rooms alongside a framed image of the last supper. After questioning many relatives, no one knows why they do it. Some believe they’re a symbol of health, bounty, and prosperity. It could be a nod to the pan-Filipino appreciation of food. Perhaps it’s a blaring sign to guests: “Yes, you eat in this room!” A more sinister thought is culinary Stockholm syndrome. Utensils were introduced by colonizers who thought eating with your hands was savage, not part of civilized society. In some ways, the spoon is oppressive.

But spoons also imply abundance with their concave shape for scooping and serving. For me, they conjure images of eating in a large group, which I had done for most of my family meals growing up. There’s a phrase for when all of the meat is gone from a soup, “Sabaw na sabaw na aka,” slang for feeling wiped out. We would be, too, if we didn’t take up the spoon.