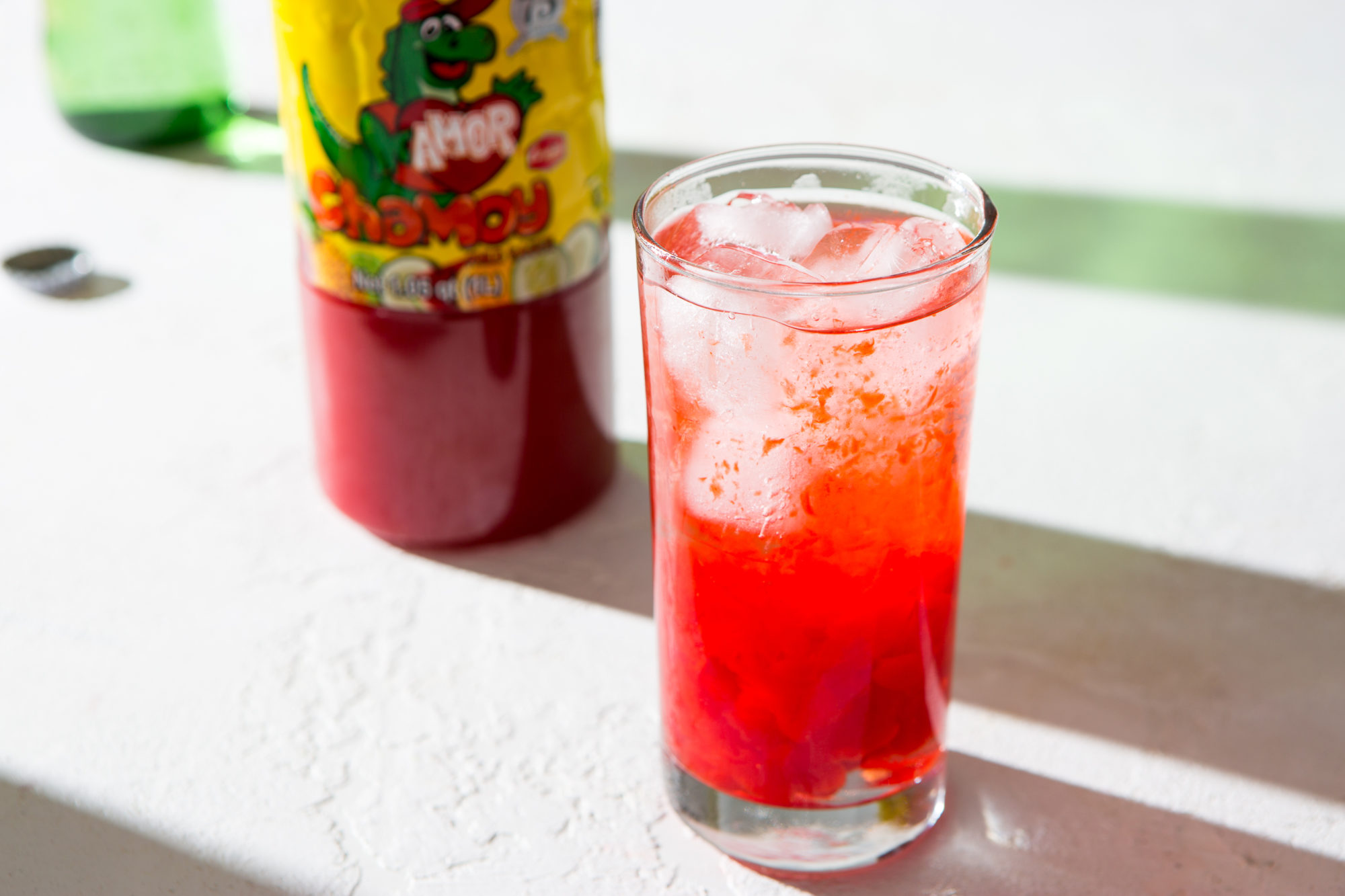 The versatile sauce has been used to punch up the flavors of fresh fruit for decades. Now it’s starting to do a lot more.

Six years ago, Ana Fernandez, an artist and owner of the Institute of Chili food truck, was trying to think of how to create a fresher, more exciting version of tacos al pastor for a local food competition in San Antonio. Her big idea turned out to be something many Mexican-Americans know well: chamoy, a bright red, sweet-sour-spicy-salty sauce that’s typically made with dried, salted plums or apricots, chiles, and lots of red dye. It’s usually drizzled over fruit or sold in small packets in the form of a powdered or pulpy candy.

Fernandez and her cochef, Jenn, prepared a porchetta filled with diced pineapple, rolled it up, and glazed it with chamoy and chile paste. Then they smoked the whole thing with post oak and pecan wood.

“Honestly, it was the best taco I’d ever had,” says Fernandez, who grew up in Corpus Christi. “We won grand champion. I still have the plate on my truck.” Fernandez, who didn’t know much about chamoy as a child, today runs Chamoy City Limits, a San Antonio truck that sells chili, plus tacos, shaved ice, and fruit topped with homemade syrups and homemade chamoy. (Fernandez makes hers with apricots or peaches, sugar, citrus, homemade chile paste, and vinegar.) While she’s embraced what she calls chamoy’s “multidimensional” flavor—at home she likes to put it on ice with 7-Up or mineral water—others have, too. The sauce, a mainstay in the Mexican and Mexican-American community for decades, has pushed out of the fruit-and-candy realm in recent years, showing up in everything from dill pickle brine to wings, sandwich cookies, cocktails and craft beer.

The popularity is not news to Mexican-Americans in the United States, many of whom, even if they don’t like chamoy, know that it’s something designed to jazz up the ordinary. In Mexico it’s an integral part of the chamoyada, a cold drink that calls for mango sorbet or shaved ice topped with chamoy sauce, chamoy powder, and often gummy candies. The candy version of chamoy, either a syrup or powder that you can suck down in a few gulps, is sold at many convenience stores. Now, though, chamoy is becoming something to try re-creating from scratch. For many in the Latinx community, it remains a symbol of our shared experience—a food we ate when no one else really did, and one that we still love eating now.

Rick Garcia, chef and co-owner of Día de Los Puercos restaurants in Pomona and Riverside in Southern California, said he first learned about chamoy from his grandparents. His grandmother used to serve him chamoy poured over apple slices as a treat, and his grandfather loved it on watermelon. Now, Garcia dunks the rim of his cocktail glasses in chamoy and tops them with chile salt—it adds a salty, pucker-y rim to cocktails like the Agua Net, a mix of cucumber agua fresca and sake, or his michelada, a kicked-up combo of beer and a house-made spice mix. He recently lacquered a slow-braised quail with a chamoy-barbecue glaze. As a Sunday treat once customers paid the bill, Garcia used to send out halved oranges studded with a saladito (a salted, spicy dried plum) and chamoy. One woman was brought to tears, he recalls, because the taste took her back to eating a similar snack with her family.

“We’re not wanting to make people cry, but we are wanting to spark the memories of childhood and growing up, whether it was in L.A. or the San Fernando Valley,” Garcia says.

According to Laudan, during the Middle Ages, crack seed was a snack enjoyed by Chinese soldiers practicing maneuvers or on the march, as a way to keep saliva flowing and have some salt. It almost certainly left China with the Chinese diaspora, perhaps landing in Hawaii during a major 19th-century Chinese migration. Li hing mui may have also traveled from China to the Philippines, where it’s called kiamoy in Tagalog. There’s also tsampoy (also called champoy), which chef Amy Besa of New York’s Purple Yam characterizes as a Filipino childhood treat, Chinese in origin, of dried, sweet, salty plums or berries. (Besa and her chef husband, Romy Dorotan, serve a champoy ice cream at their restaurants in Ditmas Park and Manila.) How a version of the treat arrived in Mexico is a mystery, but it might have come via the Nao de China, a Spanish galleon that traveled regularly between Acapulco and Manila from 1565 to 1815. The galleon not only moved goods, such as silver and porcelain, between the two countries, but it moved people, too. Laudan says it’s not out of the realm of possibility to think a version of chamoy might have come from them.

In Mexico, the company Dulces Miguelito started selling its version of the sauce in 1971, followed by a candy powder in 1973. Today the company is still one of the most prominent producers of chamoy-flavored candies in Mexico.

Fany Gerson, chef-founder of La Newyorkina and Dough in New York City, as well as the author of three cookbooks on Mexican sweets and ice cream, says she first tried chamoy in high school in Mexico City in the 1990s. She’d buy a little packet of the sauce and eat it as candy, or drizzle the sauce on fresh fruit. Now, at home, she usually sets out the sauce when she’s entertaining, along with mezcal, beer, tequila, and other salty sauces and fruit purees, so people can mix their own drinks. Gerson says she particularly loves chamoy with guava and lime.

She has tried making her own chamoy, but she says the taste isn’t the same.

“The best way I can describe it is ketchup, the Heinz that people grew up with, and now there are gourmet natural ketchups,” Gerson says. “They’re good, but they don’t replace the nostalgic flavor. Yes, it’s junky. No, it’s not natural. But it’s what takes me home.”

Lesley Téllez is a writer in Los Angeles and the author of her own Mexican cookbook—Eat Mexico: Recipes from Mexico City’s Streets, Markets and Fondas.