Get a free recipe
Subscribe
How I Spent My Sicilian Vacation
By: Linda Schneider 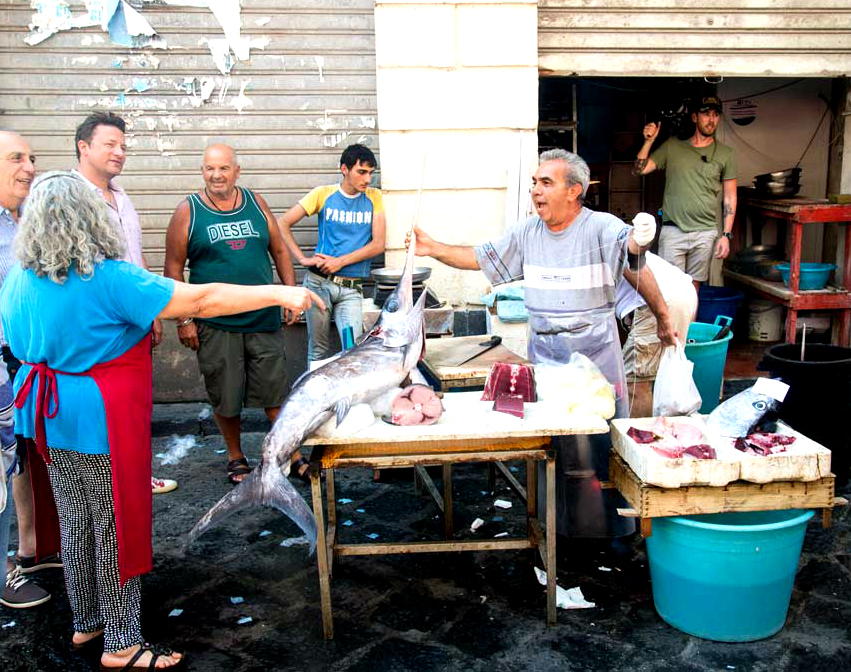 Sicily is spectacularly beautiful, a little rough around the edges, and always an adventure when seeking out dinner.

I just returned from three and half weeks in Sicily—the largest and arguably most exciting island in the Mediterranean. This was my second trip there; the first was in 2011, and I had been yearning to return ever since. Sicily has an inherent beauty to it—lovely beaches (more rocky than sandy), nature reserves, well-preserved archaeological sites, medieval towns, mountain villages, loud and colorful markets—but at the same time it’s a bit rough around the edges.

Perhaps the Arab rule left the greatest imprint on Sicilian cuisine. The mix of sweet and sour (agrodolce) is quite prominent in Sicilian cooking. For instance, you’ll find caponata—a sweet and sour combination of eggplant, onions, celery, tomatoes, vinegar, capers, and olives, sweetened with a bit of sugar—on just about every menu. In addition to the humble eggplant, the Arabs brought citrus fruits, saffron, sultanas, sugar cane, almonds, pistachios and durum wheat—the latter of which led to the development of pasta and couscous. Arancini (stuffed rice balls), also very popular throughout Sicily, were devised by the Arabs as a way to preserve meat.

Most traditional Sicilian dishes were created out of necessity—cucina povera (food of the poor). Vegetables, legumes, herbs, fruits, nuts, pasta, cheese, bread, and olive oil are plentiful, while meat and fish are consumed to a lesser extent. No part of the animal goes to waste. Pork spleen sandwiches (pane con la milza) and grilled lamb intestines (stigghiole) are common street foods, particularly in Palermo. Catania is the birthplace of pasta alla Norma (pasta with eggplant and ricotta). Acierale is the birthplace of granita (a delicious and refreshing semifrozen dessert made from sugar, water, and any number of flavorings; pistachio was my hands-down favorite).

And then there’s restless Mount Etna, Europe’s largest active volcano, lurking in the distance, with its potential to catapult molten lava (1,292° to 2,192° F) into the sky at any moment. More than 25 percent of Sicily’s population resides on the slopes of Mount Etna. On this trip, the summit craters were closed to hikers due to recent volcanic activity. For days, you could see puffs of smoke eerily rising from the central craters.

The soils surrounding Mount Etna are extremely rich in minerals. These mineral-rich soils, along with high altitudes, make the area especially well suited to growing grapes—and thus for wine production. Of course, Mount Etna isn’t all about wine. It is also well regarded for its olive oil. The town of Bronte, 10 miles northwest of Etna, is known for its pistachio farms. On Etna’s eastern slope, the small town of Zafferana has a long history of apiculture, producing 35 percent of Italy’s honey.

One afternoon, we went on a bit of a wild goose chase in search of a pistachio farmer we had read about. Eventually, we tracked down his wife, who then called her husband, who was nice enough to give us a tour of his estate. Unfortunately, I speak little Italian (and not a trace of Sicilian), and he spoke very little English. Nevertheless, we communicated well enough to purchase a four-pound bag of Bronte’s finest.

Lastly, what really stood out about Siciliy was the hospitality of its residents. At one B&B, our host, a former chef, eagerly grilled up whole fish and vegetables we had procured at the market earlier that day and went so far as to whip up a batch of salmoriglio (an olive oil–, lemon- and oregano-based sauce) to accompany our fish. We spent a good amount of that evening chatting with him. As with the pistachio farmer, a language barrier existed, but we found a way to connect over our love of grilling fish.

This memorable pasta dish was inspired by a meal I had at La Trattoria in Scopello, a charming hamlet in the northwest corner of Sicily, in the province of Trapini. This combination of ingredients is classic Sicilian.