Get a free recipe
Subscribe
Spain’s Burnt Cheesecake Breaks All the Rules
By: Daniela Galarza 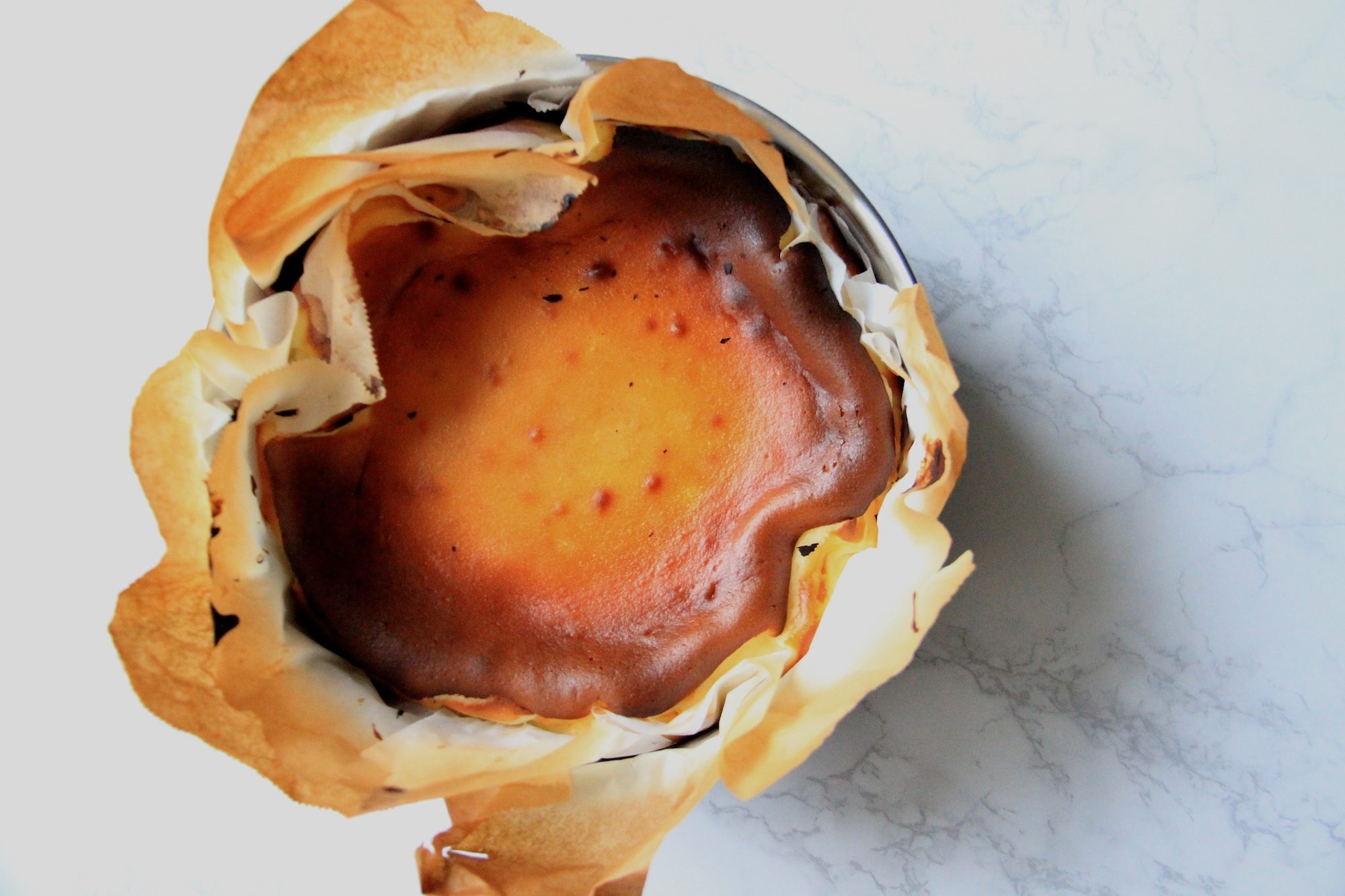 An underbaked mystery, a fine-dining fable, and the recipe of a famous cheesecake hiding in plain sight. We asked a Los Angeles chef for hints about the recipe he developed. He wouldn’t share. But it led us to the source—San Sebastián chef Santiago Rivera—to unlock the mystery.

Ask a chef, almost any chef, about the cheesecake at La Viña in San Sebastián, Spain, and they’ll inevitably sigh and nod, with a knowing, faraway look in their eyes. Over the past three decades, restaurateurs, cooks, and the food-obsessed from London, Tokyo, Istanbul, Melbourne, Mumbai, New York, Paris, Hong Kong, Los Angeles, and hundreds of other cities have gone on pilgrimages to Spain, a land rich with pork and bright with citrus. And over the past three decades, a cheesecake—a closer cousin to Junior’s in New York and Eli’s in Chicago than knafeh in the Middle East or torta de ricota in Italy—has enchanted chefs and diners alike.

La Viña, a restaurant that opened in San Sebastián—the Basque region’s capital city—60 years ago, serves an improbable tarta de queso. Its blackened top, surrounded by a flutter of burnt parchment paper, hides a center the texture of soft custard. “It breaks all the rules of the porcelain-white, even-textured cheesecake [Americans] know,” says pastry chef Bea Vo, who’s based in London and has had La Viña’s cheesecake at least a dozen times. “It’s proudly tanned and even burnt in spots, with a rough, pillowy edge and oozy center.”

There’s something ugly-but-beautiful about its appearance, but everyone who has tasted it agrees that it’s spectacular. A slice of it looks like a wedge of triple-crème Camembert, with a rough exterior and a middle that puddles on the plate. That darkened top adds a mysterious, but highly enjoyable, flavor akin to salted caramel or browned butter, with an added complexity and alluring tang from the milk solids in the cheese, which caramelize at high temperatures. San Sebastián claims to be the birthplace of pintxos, or tapas-like dishes stabbed with a pintxo, or small skewer. Like all great things, tapas were born of necessity: Probably two centuries ago, bar patrons in Spain started using slices of bread to cover their glasses of sherry so that flies didn’t drown in their drinks. Eventually, those slices of bread became more elaborate when bar owners decided to garnish them with anchovies, olives, salty cheeses, grilled seafood, and ribbons of bright red serrano ham. Tapas and pintxos are never sweet because, well, that would defeat the purpose.

So it’s particularly surprising that in a land full of perfect pintxos, cheesecake has inspired rapturous praise and sent both home cooks and professionals into the kitchen to try to reproduce this magic in their homeland. First, it went viral throughout Spain, of course, with copycat versions popping up in bars around San Sebastián and Bilbao.

In 2008, chef Alex Raij of New York’s Txikito put it on her menu, but “no one really noticed,” she recalls. “I don’t think New Yorkers really got it,” she says.  “We put our own spin on La Viña’s version using goat’s milk cheese.” Meanwhile, bloggers and vloggers from around the world reported on their taste memories and shared recipes they made inspired by the real thing.

In 2009, Australian-Spanish chef Frank Camorra put a version of the cheesecake (his recipe included sheep’s-milk curd) on his menu at MoVida in Melbourne, and in his cookbook, Rustica, published in 2011 in the U.S. Around 2012, the cheesecake sprang up in cafés in Istanbul. B.Blok bakery has 30,000 Instagram followers who are obsessed with its “San Sebastian cheesecake,” which it put on its menu in 2014. It’s so popular today in Istanbul that a bakery owner is suing a competitor for using the same name for the cheesecake in question. Last year, chef Tomos Parry put it on his menu at his Basque-inspired restaurant, Brat, in London. Parry says he uses goat’s-milk curd to get the moist but soufflé-like texture and funky taste. But the deepest dive came in 2013, when chefs Grant Achatz, Mike Bagale, and David Beran of Chicago’s Alinea and Next restaurants toured Spain in search of inspiration for their menus. “We did a week in Spain, but three days of pintxos with [chef Juan Mari] Arzak and [chef Andoni Luis Aduriz] Andoni from Mugaritz,” Beran says. The result was Next’s Tapas Menu, which featured a version of the cheesecake. The Chicago Tribune‘s longtime critic Phil Vittel called it “the best cheesecake I’ve ever had.”

“We got a few tips from the team at Mugartiz, and asked them some questions about their setup, but we didn’t get their recipe,” Beran remembers. “After we got back [to Chicago] from Spain, Grant challenged the teams at Alinea and Next to re-create it.” An intense battle of research and development ensued.

“There were some things we had to rule out immediately,” Beran says, when asked about his process. “They have a small kitchen. They don’t have 12 mixers or a huge staff. We immediately threw out the hydrocolloids [a class of ingredients frequently used in molecular gastronomy]. They aren’t using a salamander or any of that stuff. It had to be a simple recipe, I just knew it,” he says, laying out his code-cracking method.

Beran eventually won the challenge presented by his then boss and now serves his version at his own restaurant in Los Angeles, Dialogue. But Beran is also tight-lipped about his recipe, revealing only that “it has five ingredients and two of them are sugar and salt.”

A trip to San Sebastián didn’t clear up any mysteries for me, unfortunately. I found out too late that La Viña closed for renovations late last year and won’t reopen until this April. Meanwhile, a few other restaurants in San Sebastián are serving what they call Basque Cheesecake: Bar Sport and Senra. “It’s not quite right, though,” Vo says. “They overbaked it, or maybe they didn’t add enough eggs.”

This cheesecake started to consume my every waking moment. I stayed up late Googling in Spanish, Turkish, and English, searching hashtags on Instagram and clicking through video after video on YouTube. That’s when I came across Santiago Rivera making…the cheesecake he invented for La Viña in 1990.

“I don’t know how these tales get started,” Gabriella Ranelli laughs when reached by phone while driving from Barcelona back to San Sebastián. “There’s no secret to this cheesecake,” she says. Ranelli hails from the contemporary-art world in New York but moved to San Sebastián in 1989 “to get away from it all.” Today, she runs Tenedor Tours, a food tourism company that, among all the sights to be seen around Spain, makes a stop at La Viña. She knows its owner well. “Santi [Santiago Rivera] has run La Viña for the past 30 years, and he gives his cheesecake recipe away to anyone who will take it!” Ranelli sometimes hands out printed copies of the recipe on her tours. “In the early 2000s, I gave the recipe to a woman from Australia who went home and made it, and her friends laughed at her because they thought she was lying about it being burnt,” Ranelli says, “because it wasn’t yet all over the Internet.” Santiago Rivera, chef-owner of La Viña, with his cheesecake

Rivera tells me via text message that he wanted to add dessert to the menu at La Viña when he took over managing the restaurant from his parents. He was looking for inspiration in books when he decided on cheesecake. “I tried a few different proportions, but mainly wanted it to be very creamy,” he writes.

San Millan is a popular brand of cream cheese in Spain. The major difference between it and Philadelphia brand is that San Millan is saltier. “So most recipes using Philadelphia add salt,” Ranelli says, “but the original doesn’t contain salt.”

Sometime around 2008 or 2009, Rivera started distributing recordings of himself making some of La Viña’s specialties, including the cheesecake. These DVDs (!!) can still be found at the restaurant. When I ask Rivera about the many iterations of his recipe found online, he says his recipe is meant to be adapted to suit a home cook’s taste. “If you want salt, add salt; if you want vanilla, add vanilla; some people add lemon zest.”

In New York, Raij still serves a version of La Viña’s cheesecake, which she says is becoming really, really popular lately. “I’m getting more requests for it for weddings and caterings,” she says. Raij likes riffing on the formula, and though she doesn’t have salt in her base recipe, she serves slices of the cake with salted whipped cream. “Salt brings out the flavor of the cheese,” she says. “It’s such a special dessert.” It may be special, but it’s no secret.