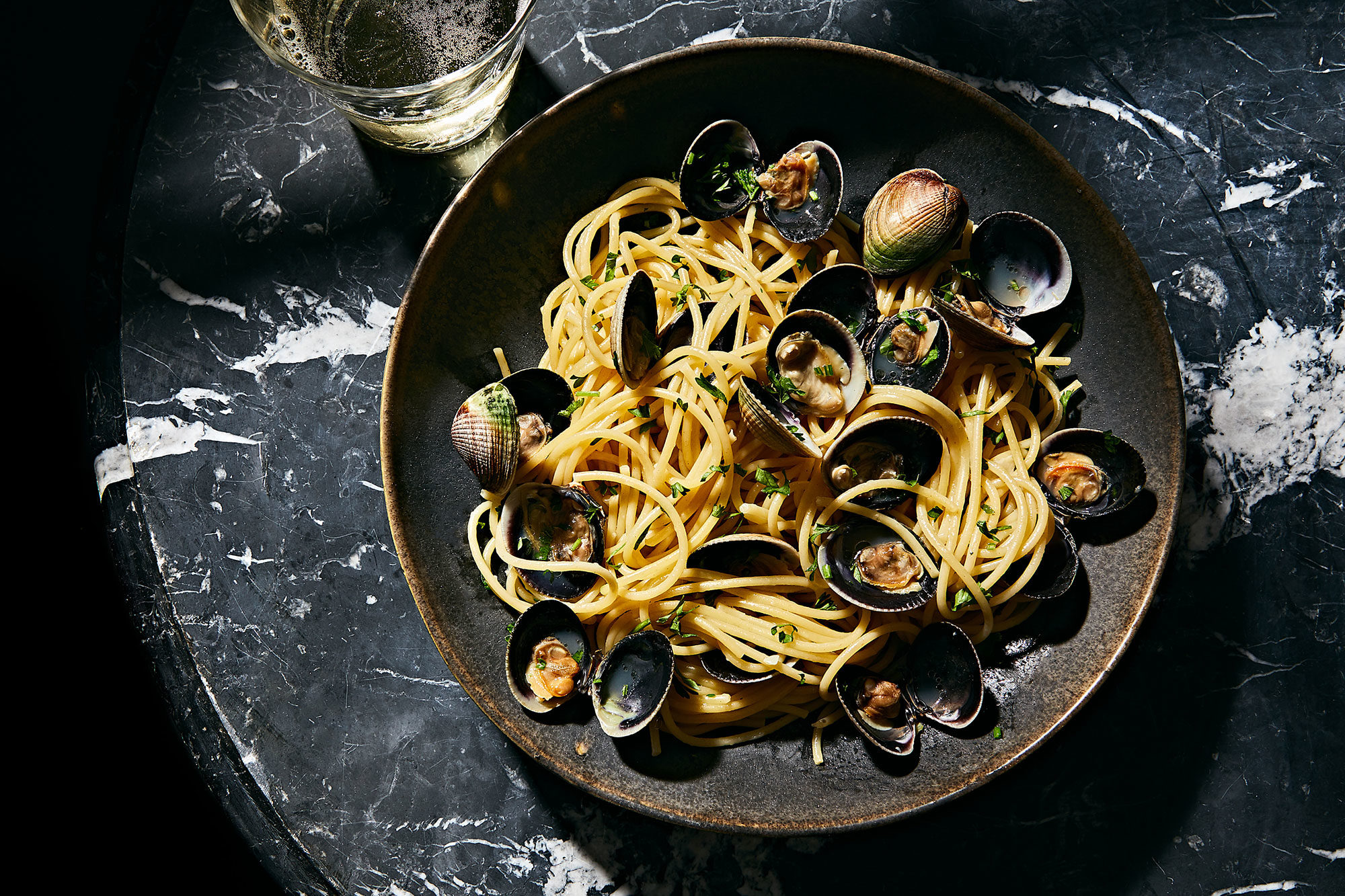 Spinoffs with linguine, cheese, and tomatoes abound, but the real spaghetti and clams can be found in only one Italian city.

In a legend that distills the Neapolitan obsession with spaghetti with clams, the famous stage actor Eduardo De Filippo is said to have returned home after a long day of performing in 1947, hungry for a plate of spaghetti alle vongole. Undeterred by the fact that he had no fresh clams available, he prepared the dish as he would normally: sautéeing garlic and crushed red pepper flakes in olive oil, adding small tomatoes grown near Vesuvius, pulling out the pasta when it was cooked al chiodo (a minute sooner than al dente) and allowing it to finish in the saucepan with the other ingredients before tossing in a handful of fresh chopped parsley.

He christened the final product spaghetti alle vongole fujute—spaghetti with clams that have escaped—and according to the version of the story recorded in his wife’s cookbook, he swore that while eating it, he could taste and smell the sea.

The idea that a true Neapolitan can evoke the flavor of clams even when the clams aren’t there might seem absurd, but the sting of garlic and dried chile frying in olive oil mixed with the salt air floating in off the gulf signals one thing to anyone from Naples: spaghetti alle vongole.

Already in the 17th and 18th centuries, before pasta was widely consumed in the region, chefs like Vincenzo Corrado were preparing soup or broth with clams for the Campanian nobility in and around Naples. By the 19th century, Ippolito Cavalcanti, the duke of Buonvicino, had published the first formal recipe for the dish in his cookbook written in Neapolitan dialect, cementing it as a local treasure. Today, spaghetti alle vongole is the simplest way to test a Neapolitan’s credibility in the kitchen. Cavalcanti’s first recipe reveals how much faith there was in the star ingredient. Nothing more or less than vermicelli (a slightly fatter form of spaghetti), olive oil, a clove of garlic, and the clams themselves should appear, with just a finishing handful of fresh parsley. The focus is entirely on the vongole, which should be cooked separately to release their juices, the liquid from which is then strained and simmered with the olive oil and garlic base, before the clams and pasta are added and all cooked together for a final minute.

In Cavalcanti’s time, the only clam to use would have been the verace or “true” clam, native to the shallow waters of the Mediterranean and known for imparting a delicate but irresistible flavor of the sea. Before the introduction of farmed clams, or the heartier vongole filippina, it was the surprisingly intense, perfumed brininess of the tiny, fresh-caught vongole veraci, and their sense of place, that catapulted a dish so unapologetically naked to greatness.

While this early “white” recipe might remain the gold standard, the intervening centuries have welcomed manipulations as the dish has proliferated across the Italian peninsula and isles, including the Calabrian version that uses the much hotter local dried chile or the Sardinian one that swaps long pasta for the couscous-like fregula. Many of the most popular modifications have become acceptable also in Naples, if begrudgingly. White wine and peperoncino are more or less canon, spaghetti has resoundingly replaced the less common vermicelli, and the “red” alternative has perhaps even matched the original bianco version in prevalence, as the fresh cherry tomatoes, or datterini, provide sweetness and acidity that might not otherwise come from the clams. Though purists shudder at the thought of alternatives, the lupino, a slightly larger saltwater clam, or the vongola filippina—the Manila clam found all over the Indian and Pacific oceans—are increasingly used due to their much wider availability, in Italy and beyond.

Of course, Manila clams are only the beginning of the sacrileges committed in iterations of spaghetti alle vongole that have leapt across the pond. In the United States, anything from a littleneck to a surf clam might turn up in your pasta, which might actually be linguine or bucatini, and bacon or pancetta are often hiding somewhere in the sauce. Most horrifying of all for any hot-blooded Neapolitan, cheese is almost always added, and liberally at that. And yet, as De Filippo’s satisfying and evocative escaped clam spaghetti proved, the mere memory of clams can be enough to make spaghetti alle vongole everything it’s meant to be.