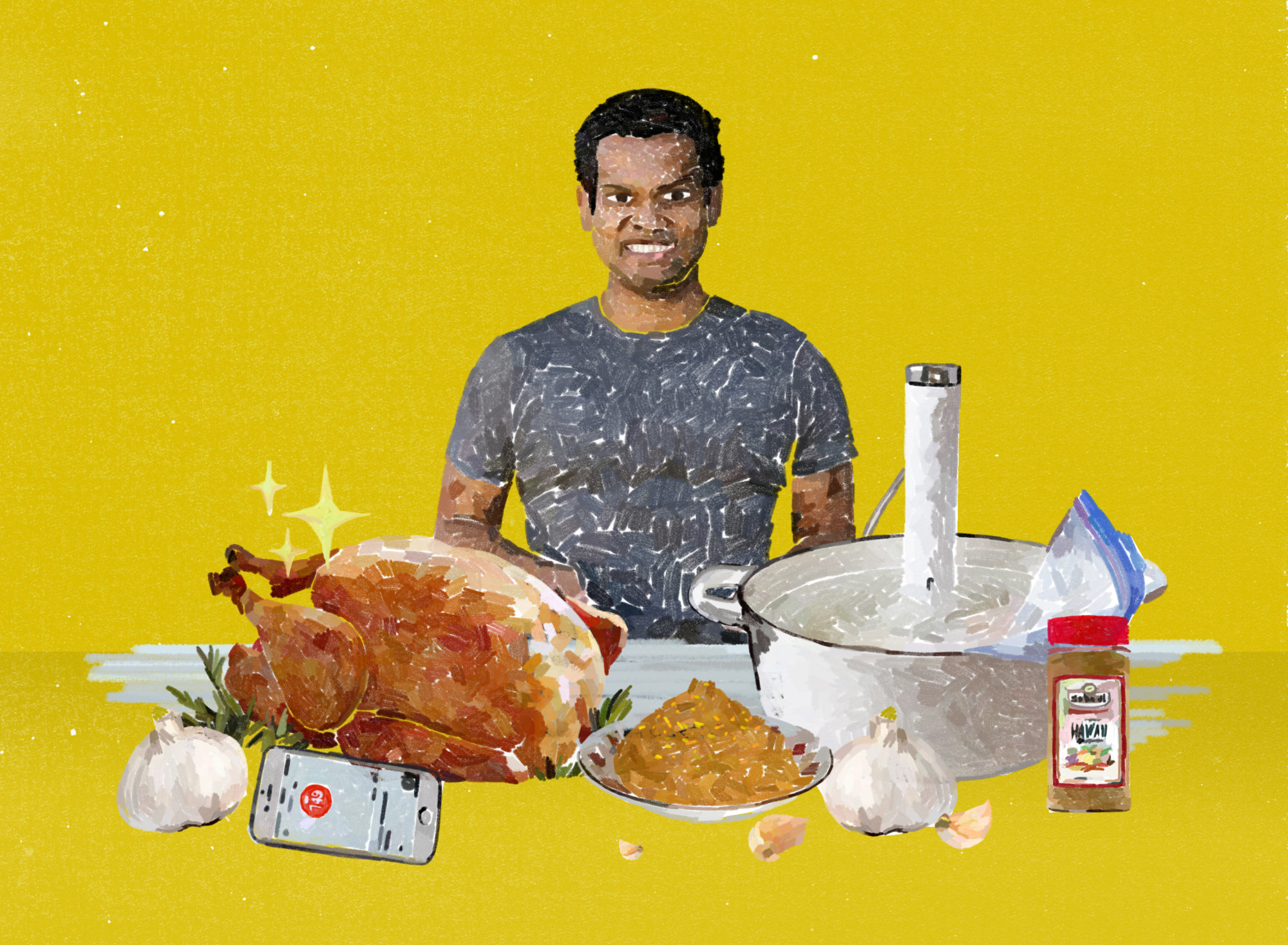 Between contributing to TASTE, blogging at A Brown Table, and writing his cooking column at the San Francisco Chronicle, Nik Sharma—who also just released his first cookbook, Season—always has something on his plate. We gave him a Joule from ChefSteps and a mission: Sous vide a Thanksgiving turkey, have fun, and write down everything in a journal.

First impressions: Sous vide is an interesting way to cook turkey. It won’t be served whole for obvious reasons: Sous vide is a technique that relies on immersing food in a vacuum-sealed bag in a heated and circulating water bath, so it would be tricky for a whole bird to come into contact with the water and heat efficiently. Hence, the bird must be cut into parts before it can be cooked by this method. But I’m curious to see how it will work with the breast and leg parts since the recipe uses different temperatures and time intervals for cooking. I wonder how the lack of a wet brining step will affect the end result, too.

I’m adding few cloves of garlic and a bit of the Middle Eastern Hawaij seasoning, which contains coriander, cumin, allspice, turmeric, cardamom, ginger, cinnamon, cloves, and nutmeg, among other things, to give it a bit of kick. But the basic bones of the recipes are from the Joule app, so I won’t need to worry about the timing and temperatures.

Step 1: I set the water bath to 150°F. The device itself is quite sleek and easy to work with once you install the app on your phone and connect everything via Bluetooth. It also takes up less space in the water bath since it’s so narrow.

Step 2: I dab the breasts dry with paper towels, then heat up a large skillet on high with a little oil. It starts sizzling once I add the breast to the hot pan. It’s already smelling good, and I haven’t even added any seasoning—the magic of heat!

Nothing crazy has happened yet. Once the turkeys are seared well and golden brown, I take the breasts out of the pan and do the same thing with the legs. So far, so good.

Step 3: I’ll be honest here. I’m not a big turkey person; I prefer chicken for its taste and richer flavor. I mix the salt and sugar (5:2 ratio) in a bowl for the brine in the suggested ratios (1.5 percent of the total turkey weight). I’m still not sure how this will take the place of a traditional liquid brine, but I keep an open mind.

I add my own seasonings in and mix it up, rubbing it all over the meat pieces and then separating them as per the instructions: legs in one bag, breast in another. The instructions say to put the breast aside, so it’s in my fridge for now. I wrap plastic film around the top of the water bath, as I know the water will start to evaporate while it cooks for hours. I leave it be and get ready for my day. It’s a 12-hour wait, so I might as well get some cookbook stuff done, wrap up a few meetings, and finish a story that is way past its deadline.

Step 4: I’m back now. The legs in the bags have cooked a little, but they’re not fully done. Now, the Joule app says to lower the heat to 131°F, which I can change through my phone. Once the heat is adjusted and set, I add the bag of breasts and leave them in for another eight hours.

Step 5: The Joule timer says it’s all done. There’s a bit of liquid in each bag (which I discard) and pat the turkey pieces dry. So far it’s all very easy, and most importantly, the meat is evenly cooked!

I turn the oven on and set it to a low broil setting. The turkey parts are in a cast-iron pan now, and I leave them to broil until they get golden brown and crispy. As it nears the 12-minute mark, I hear the sizzling and can smell the spices in the Hawaij seasoning interacting with the bird.

In my skillet, I add a bit of olive oil and butter. Once they start to come together, I add the turkey and some knobs of butter on top and baste the whole thing.

My friends come over, and we’re prepping the table for dinner. We’re all excited now! The turkey is done. I put it on my cutting board and let it rest for a few minutes, and then slice into it. I grab a tiny bit of the breast before it goes out to the table. From a flavor standpoint, the taste and aromas are familiar, but it’s much more juicier than the turkeys I’ve cooked traditionally in my oven. Searing the bird twice during the recipe also added a deeper note of richness from the caramelization of the skin.

Final thoughts: The dry brine and the sous vide method have certainly changed my way of thinking about cooking turkey for the holidays, and this is surely going to be a repeat. It saved me a lot of time and freed my mind when it came to worry—whether or not I had brined the bird long enough, if I was going to burn the bird, or if the meat would be very dry in texture. I could forget about the bird, walk away, and leave it to cook as needed while the software regulated and controlled the process. The use of the dry brine also helped cut back some of the extra equipment I would have needed. I typically need a large stockpot that’s deep enough to soak the bird in my liquid brine, and this eliminated the need for it.

Recommendations for other cooks: Cover the exposed top of the cookware with plastic wrap well to prevent evaporation of the water. I didn’t use a professional vacuum food sealer, but inserting the plastic bag in water to displace the air works just as well.